There's maple syrup in our own backyards, and Terri Chu wants the whole city to tap in to this unexplored urban resource.

Chu has two towering silver maples in the backyard of her home in the Annex, and they've given her 18 litres of sap this past week, which she was able to turn into half a litre of maple syrup.

The mother of two never thought about tapping her own trees until a friend, who also does her own tapping, offered her a plastic spile, the spigot you drive into a tree to get at the sap.

"During the pandemic, I'm always looking for stuff to do with the kids so when I learned from [my friend] that it didn't have to be sugar maples, that any kind of maple can be tapped, I said, 'Let's give it a go,'" Chu tells blogTO.

Although she got a bit of a late start to the season that generally begins mid-February, Chu says it's been a great learning experience for her five-year-old.

"She watched me drill the holes," Chu says. "We collected the sap together and measured how much we got, so I think she got a lot out of the experience." 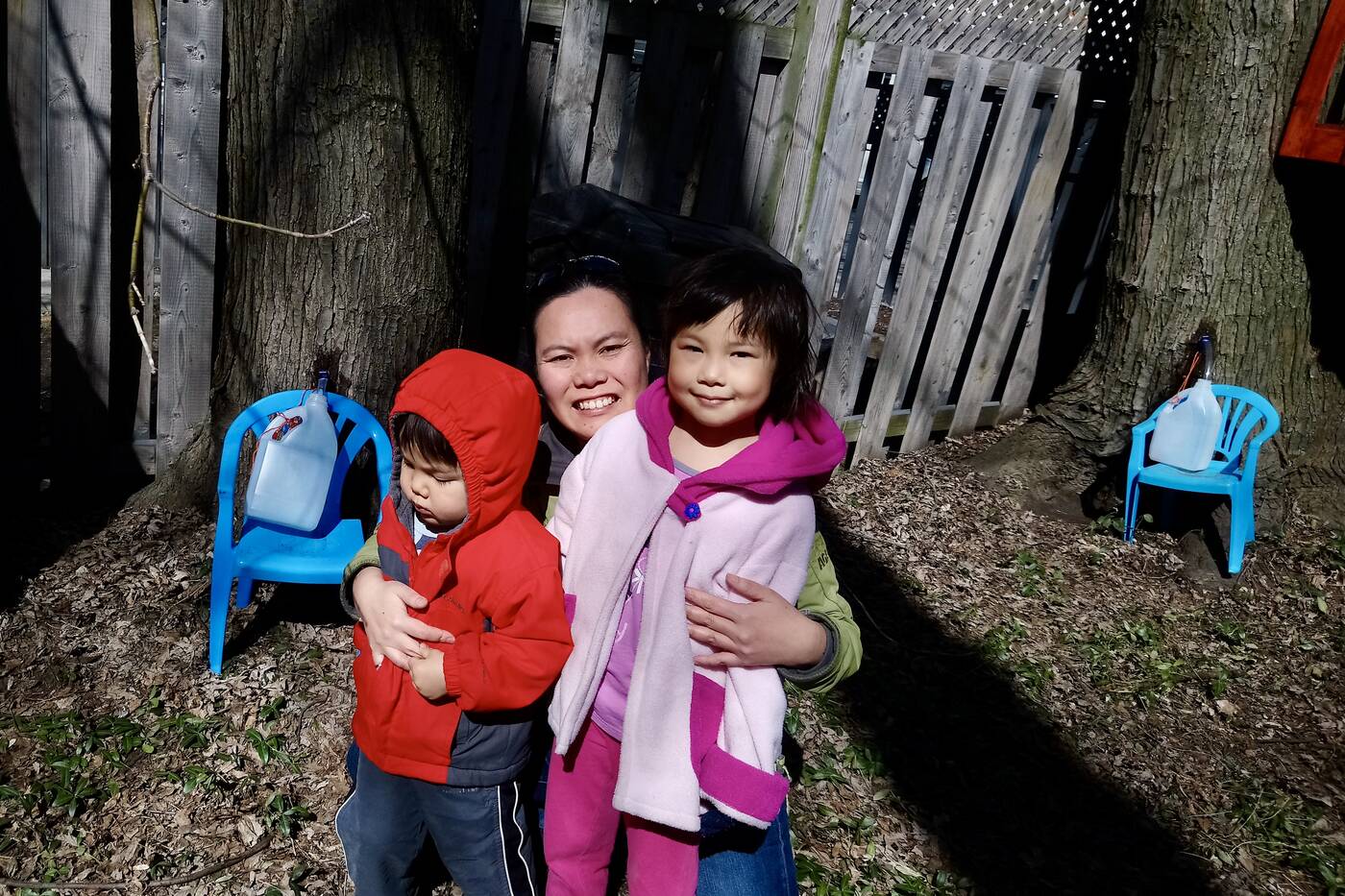 Terri Chu with her two children in front of her tapped silver maples in her backyard.

"We've lost our connection to what food really is in many ways," Chu says, "living in the city as long as we have. It's a reminder that we really do need nature. We sometimes forget that since food comes in styrofoam packages."

Chu, who has been the chair of the Parks, Tree and Environment Committee in the Annex for the past two years, has learned a lot through the process.

The outside temperatures must hover around zero degrees to create enough pressure for the tree to generate sap flow. Safe drilling can help avoid injury to the tree.

"Don't go beyond two and a half inches," Chu says. "I stayed below one-and-a-half inches because it was my first time doing it. You want to be kind to the tree, you don't want to just willy-nilly drill and create wounds." 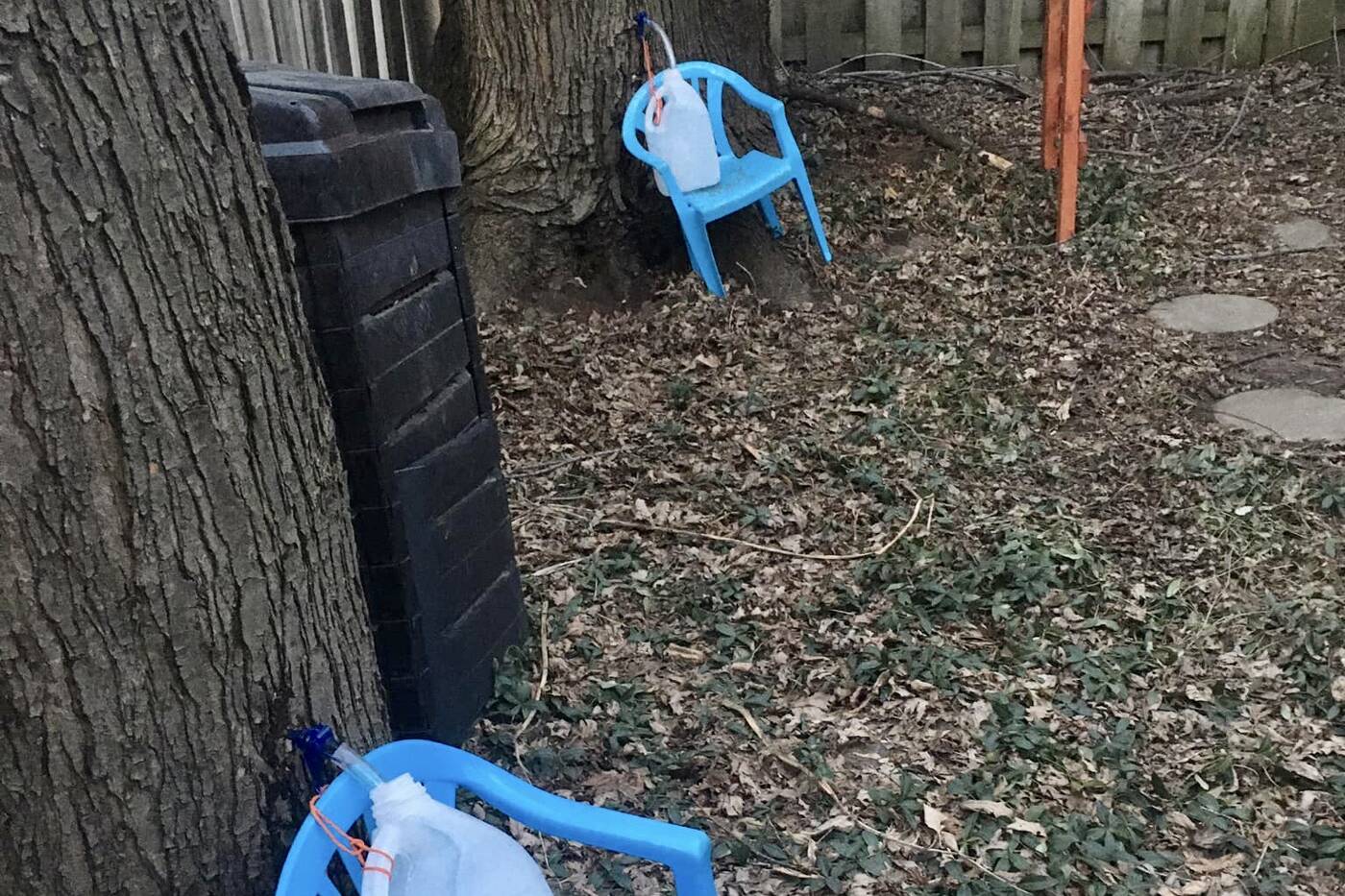 Chu's family was able to collect 18 litres of sap from the two trees in just one week.

After collecting a full record of every tree in the neighbourhood with the committee in 2014, Chu estimates that about 10 per cent of the 10,000 trees have been lost.

She hopes that safe tapping can serve as just one of the many reasons the trees should be preserved and more should be planted.

"I want people to see the trees not as a nuisance," she says, "but as something that is fantastic and give us a lot."

The information collected on the trees kickstarted an annual Mulberry Festival in 2017 when residents gathered to collect berries from people's private trees. Chu is already thinking about throwing a similar neighbourhood event next year, but for tapping.

This could work as long as the trees tapped are all privately owned as the tapping of city-owned trees remains strictly off-limits.

"That's my ambition, to get kids, more neighbourhoods and people involved," Chu says. "And just getting people to appreciate – even in our own backyards – what's possible."