A Toronto resident got quite the shock this week while hanging out with her family in the backyard.

Sanam Mughal, who lives south of Long Branch in Etobicoke, said she was playing tag with her son and husband in the family's backyard when she stumbled on what looks like a gravestone.

"At first I completely freaked out," she said.

She called her husband over.

The gravestone made Mughal nervous, as the stone is right under her bedroom window, and she wondered if someone was buried there. 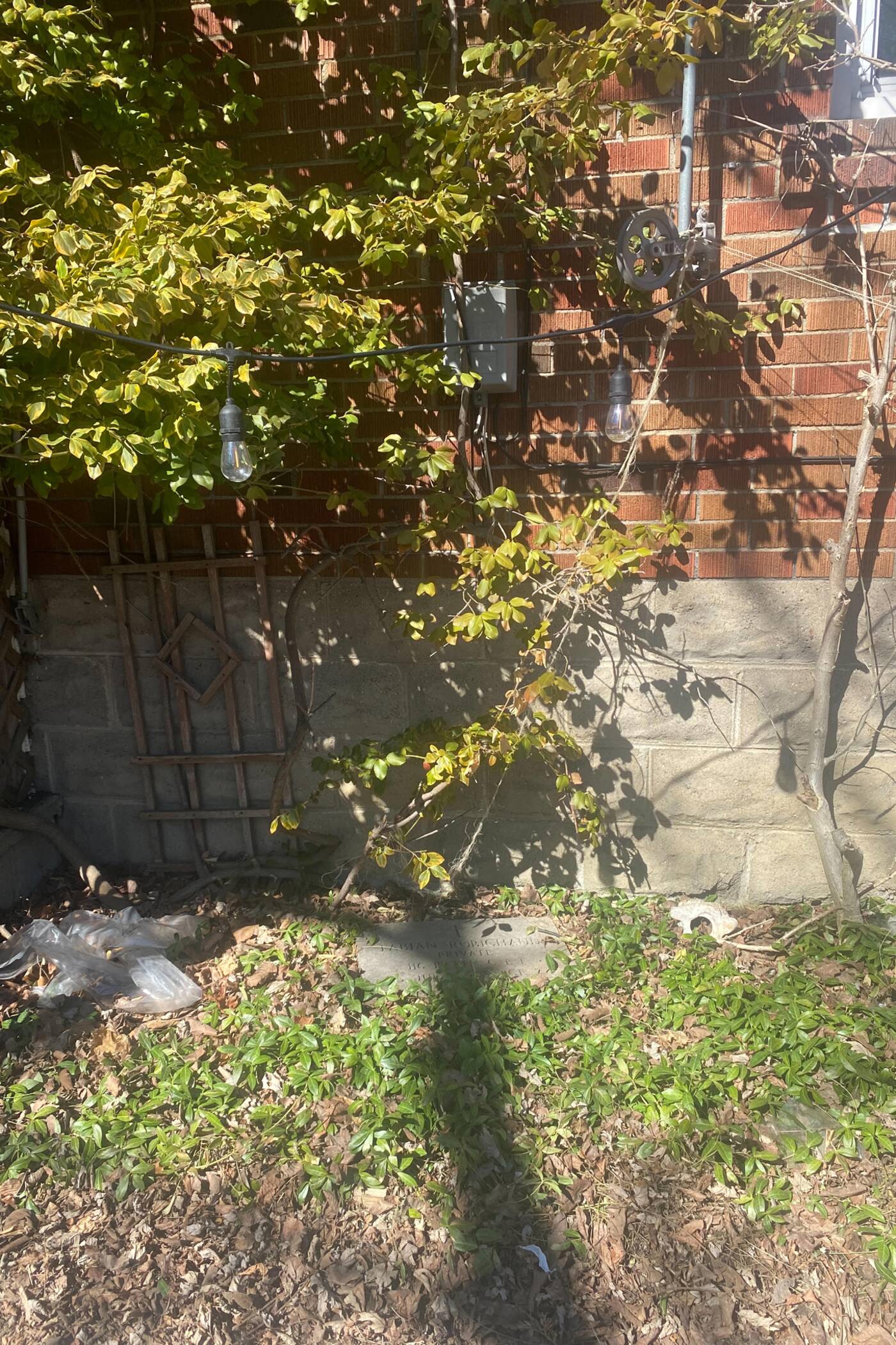 The stone was under some brush right next the home.

The stone memorializes a man named Private Fabian Robichaud who died July 25, 1967 at the age of 74.

Mughal said she didn't know what to do after finding the stone. They bought the home, which was built in the 1930s, last fall and moved there in November. They hadn't spent much time in the backyard until recently as the weather warmed up.

Unsure what to do, Mughal contacted the police. An officer came to the home but couldn't do much.

"He thinks it could be a memorial, he doubts that there is something buried there but he said we should do our own research," she added. 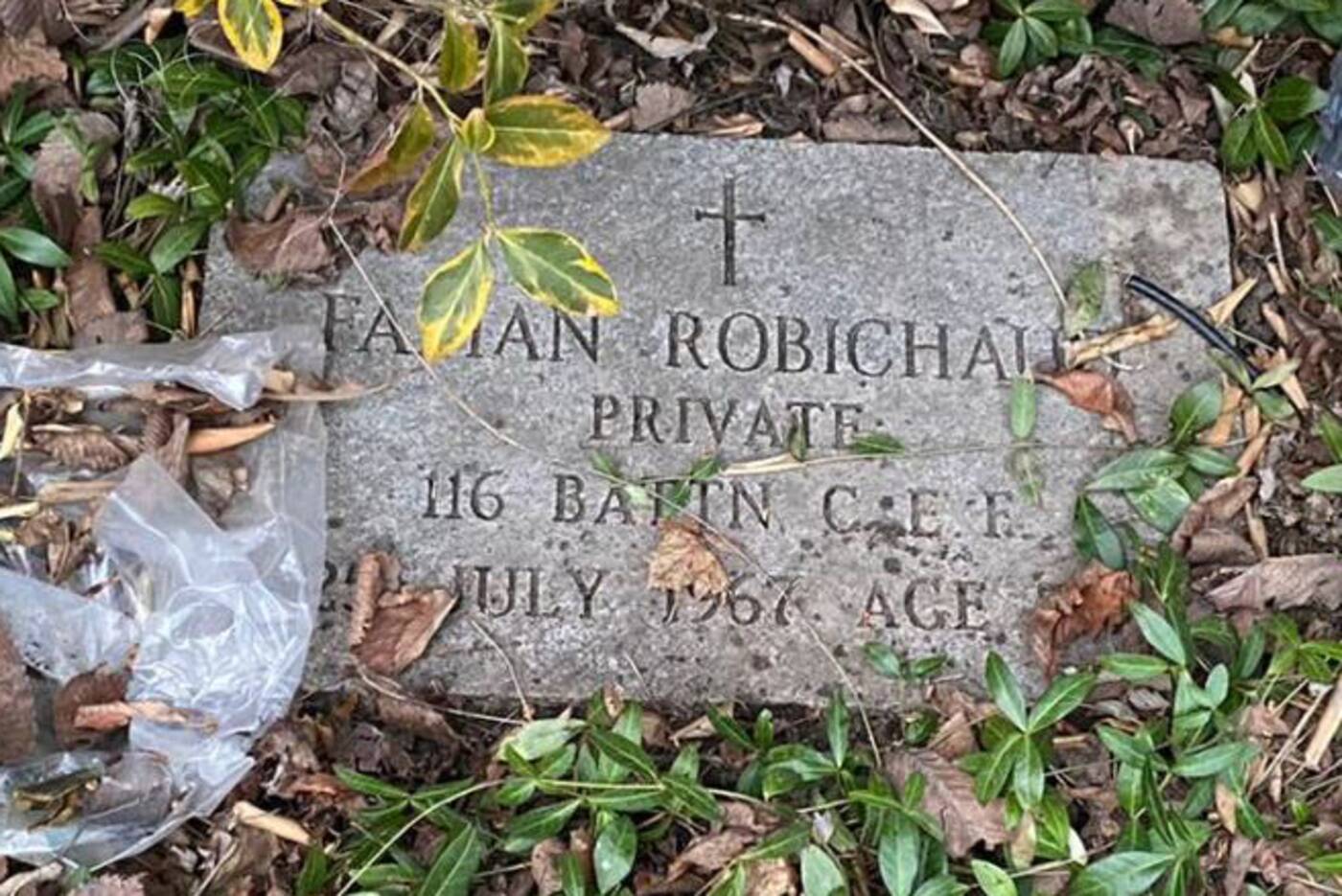 Mughal posted this photo of the stone to the South Etobicoke Community Facebook page.

Mughal posted a photo of the stone to the South Etobicoke Community Facebook Page and got more than 100 responses, mostly positive and helpful. Many people offered suggestions and now Mughal is contacting some other places such as cemeteries and the Royal Canadian Legion Long Branch. She also got an offer from an archeologist to help her dig around the stone.

Mughal said she and her husband tried to lift the stone but couldn't.

"It is very, very heavy, we would probably need professional help (to move it)," she said.

Canadian military records indicate a Fabien Robichaud, born in 1893, served in the First World War. Although he is listed as Fabien Robichaud, the handwritten documents on file seem to indicate the name was typed incorrectly and it is actually spelled Fabian. 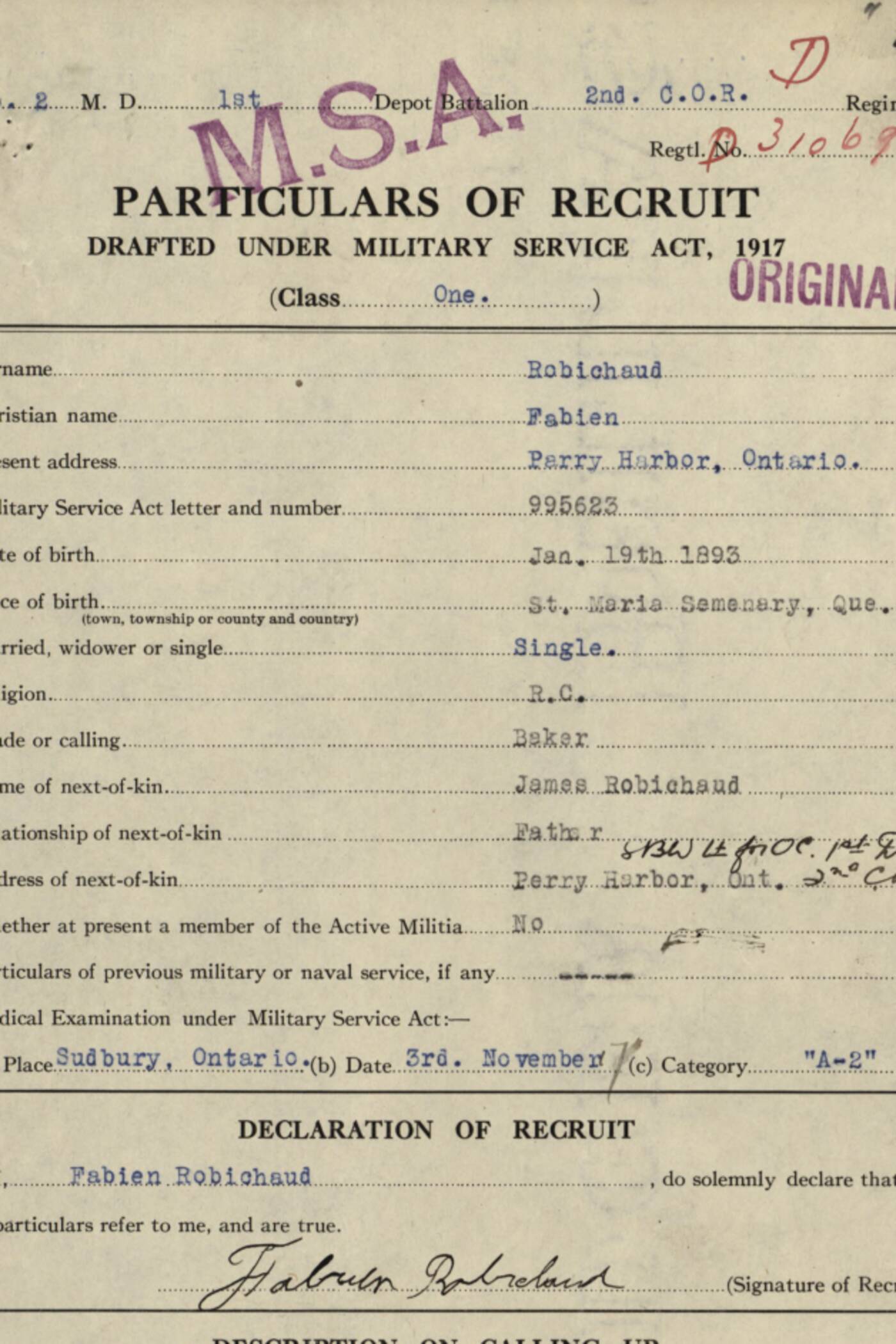 The military records show Robichaud was born in Quebec, but his address at the time was Perry Harbour, Ontario. He was discharged in 1919 after serving in England and France. 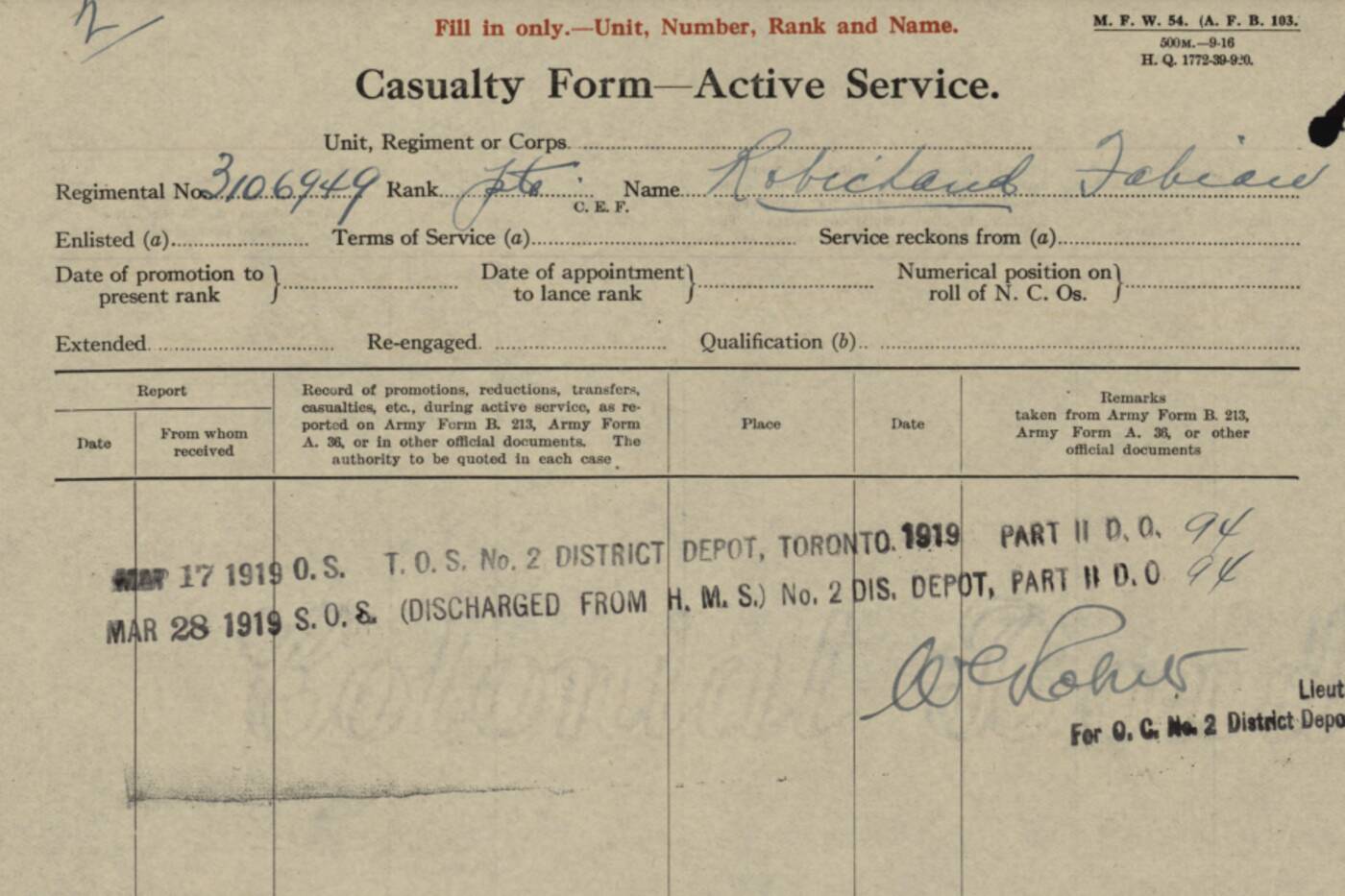 This record shows Private Robichaud was discharged in 1919.

As an update to this story, on March 13, blogTO reader and genealogist Lee Bryan found the obituary for Robichaud in the July 25, 1967 edition of the Toronto Daily Star. The obituary indicates Robichaud is buried in Mount Peace Cemetery in Mississauga. The marker in Mughal's yard may have been an original gravestone, which was later replaced. 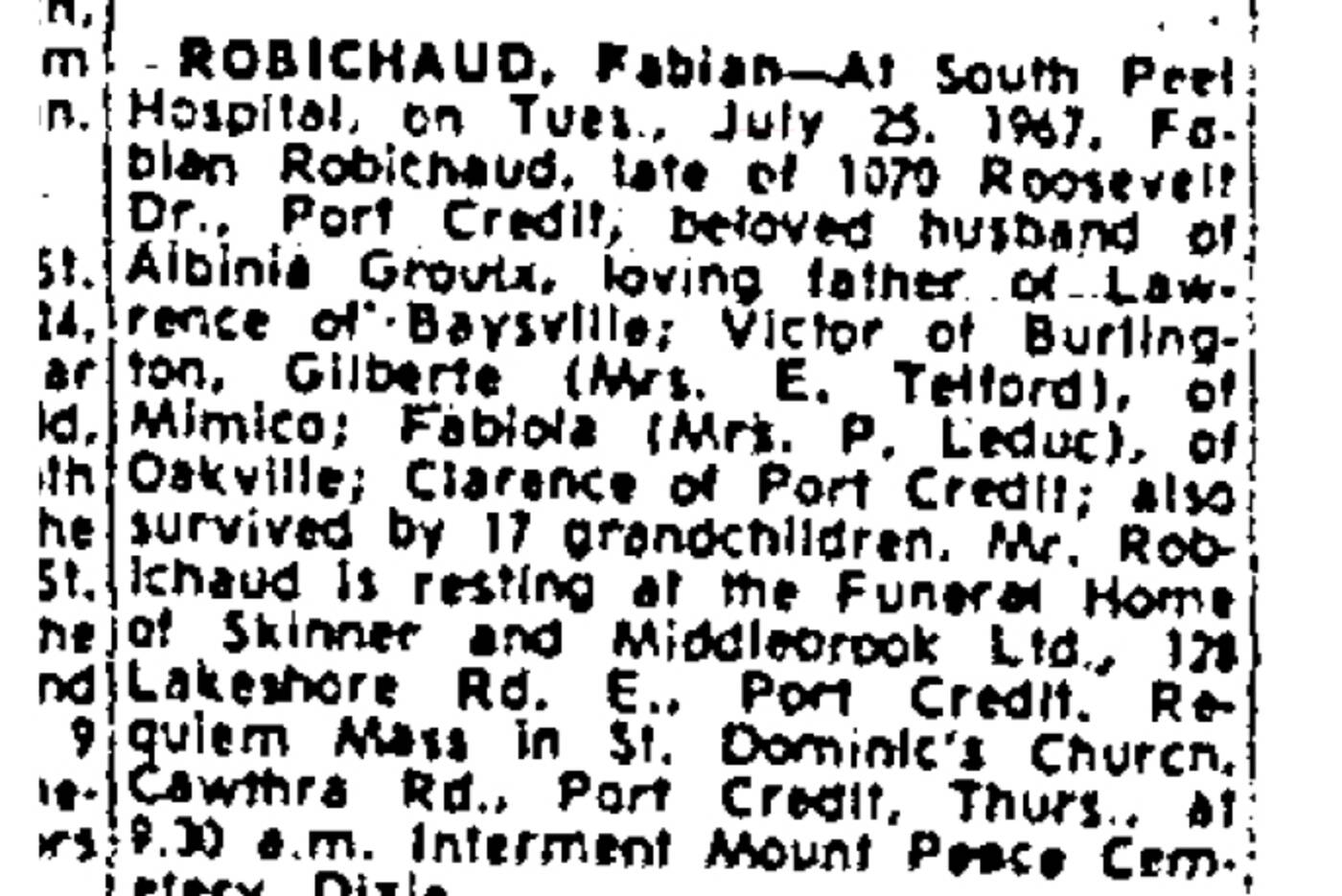 Mughal plans to keep the stone well-maintained in her backyard.

"In the end, this is a historical marker for a person who served in WW1 and I will give it respect," she said.

This story was updated on March 13, 2021 with new information from Fabian Robichaud's obituary.