These neighbourhoods had the highest eviction rates in Toronto pre-pandemic

Evictions across Toronto and throughout Ontario have been taking place at an unprecedented rate as many tenants have lost income and employment during the pandemic and accumulated rent arrears as a result, and a new study from the Wellesley Institue aims to highlight and address the impacts of these residential evictions.

"The COVID-19 pandemic has heightened the urgency to understand and address residential evictions. Evictions have the potential to disrupt the public health responses to COVID-19, magnify the associated recession, and disrupt tenants' lives," writes Leon in the brief.

"To adequately address evictions, it's important to first understand where eviction applications are taking place."

According to the data from 2016, eviction filing rates (the total number of formal eviction applications divided by the number of renter households in each ward) were highest in a number of inner-suburban Toronto wards, including Humber River-Black Creek (ward 7), York South-Weston (ward 5), Etobicoke North (ward 1), Scarborough-Guildwood (ward 24) and Scarborough Southwest (ward 20).

In comparison, Spadina-Fort York had large numbers of renters (38,595), a moderate number of eviction applications (673) and therefore a low eviction filing rate of just 0.02 per cent. 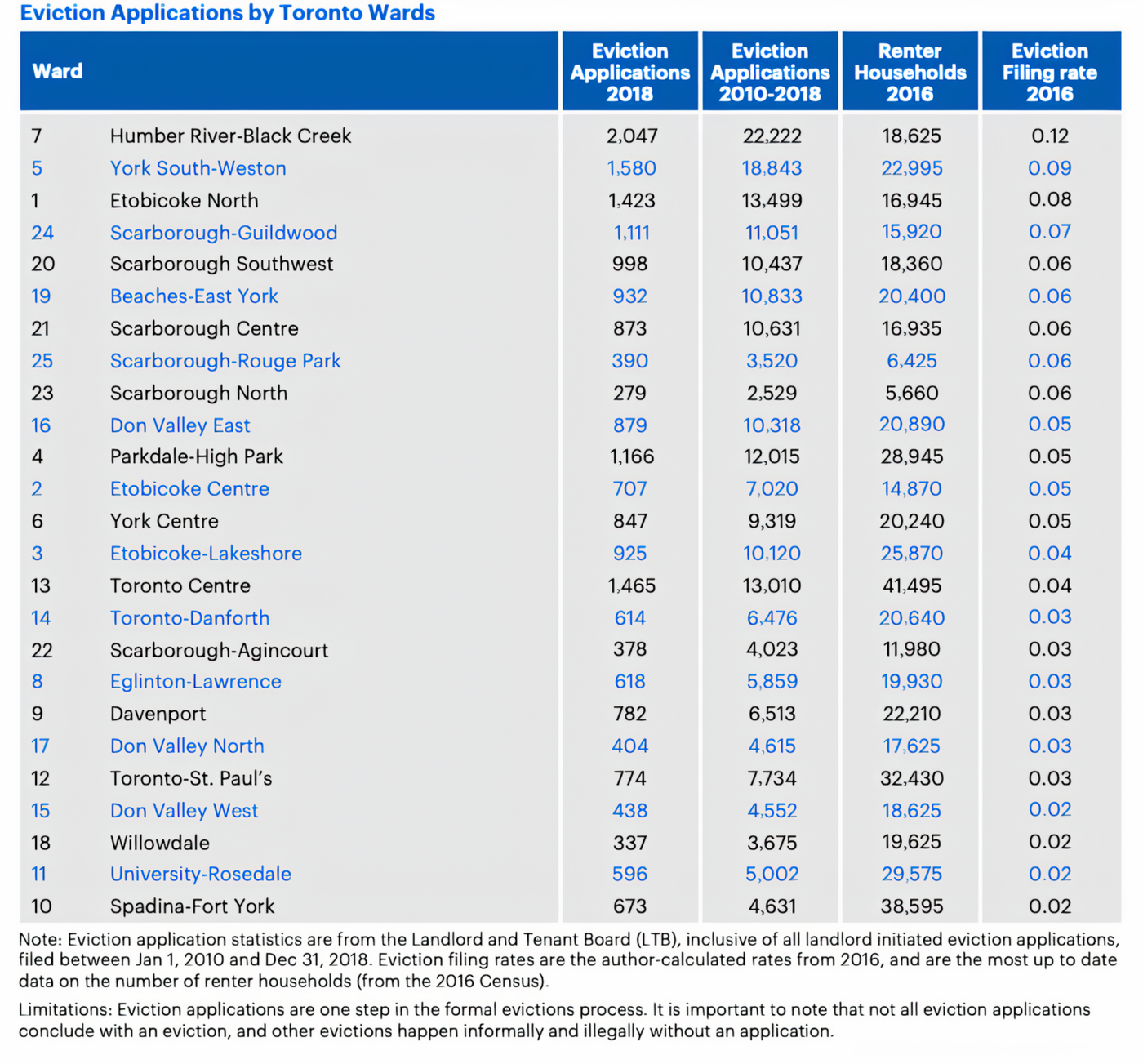 "Independent of this association, census tracts where a greater percentage of renters self-identify as Black had twice the eviction filing rates," reads the brief. "The analysis in this data brief supports this. The wards where the highest number of Black Torontians live also had the highest numbers and rates of eviction applications (Wards 1, 5, and 7)."

This is also true of neighbourhoods that have been disporpotionately impacted by COVID-19, which is hardly shocking considering the Wellesley Institute says prior research on evictions has shown them to have detrimental impacts on tenants' health.

The brief also includes two recommendations for better protecting tenants from evictions, the first of which is that the city and the province provide increased and enhanced eviction prevention services located near tenants who are facing the threat of eviction in consultation with community leaders and tenants' groups.

"This will likely make these services more effective, and also improve equity by minimizing the impact on those already suffering the threat of eviction," says Leon.

The Wellesley Institue also advises that all three levels of government should introduce an "arrears protection program" that works in the interests of both tenants and landlords to help cover unpaid rent and avoid costly evictions.

"The federal government has demonstrated willingness to use its spending power in this unprecedented crisis to step in on commercial evictions, but they should act on residential evictions as well," writes Leon.

"Tenants that have fallen behind on rent need access to financial support in order to prevent evictions. Without such measures, we can expect more tenants to lose their homes, experience increased hardship and poorer health – all in the communities already hardest hit by the pandemic."