Zahra Dhanani never saw herself as a retail businessperson.

The co-owner of Old's Cool General store, a beloved community hub and progressive one-stop-shop on the edge of East York, comes from a non-profit background and practiced as a lawyer once upon a time, but she never directly set out to start a business and make money from it.

She has, however, been an anti-oppression activist doing racial justice work for more than 30 years, and she's experienced the struggle of securing funding for this kind of work in the non-profit sector firsthand.

Dhanani told blogTO she also came to Canada at the height of "Paki-bashing," and was beat up in school regularly. "I understand what it means to not feel safe in the world," she said.

It's for these reasons, among others, that Dhanani and her partner Mariko Nguyen-Dhanani decided to open their cherished Toronto shop nearly six years ago.

"We didn't open it to have a store," said Dhanani, adding that whatever profits they make from the business go towards funding their social justice work.

"We're businesspeople second. Our whole goal was to create a community hub out of which we could build a social justice-based community that would work on social justice issues together."

The store — which is located at 250 Westlake Ave. in a little residential pocket surrounded by homes, low-income apartment buildings, seniors buildings, and four schools — first opened its doors in May of 2015, and in six short years has become a place of safety, community, and activism for the residents of the east end.

That mission is so ingrained in the store's creation, in fact, that even the variety of merchandise sold at Old's Cool reflects it. 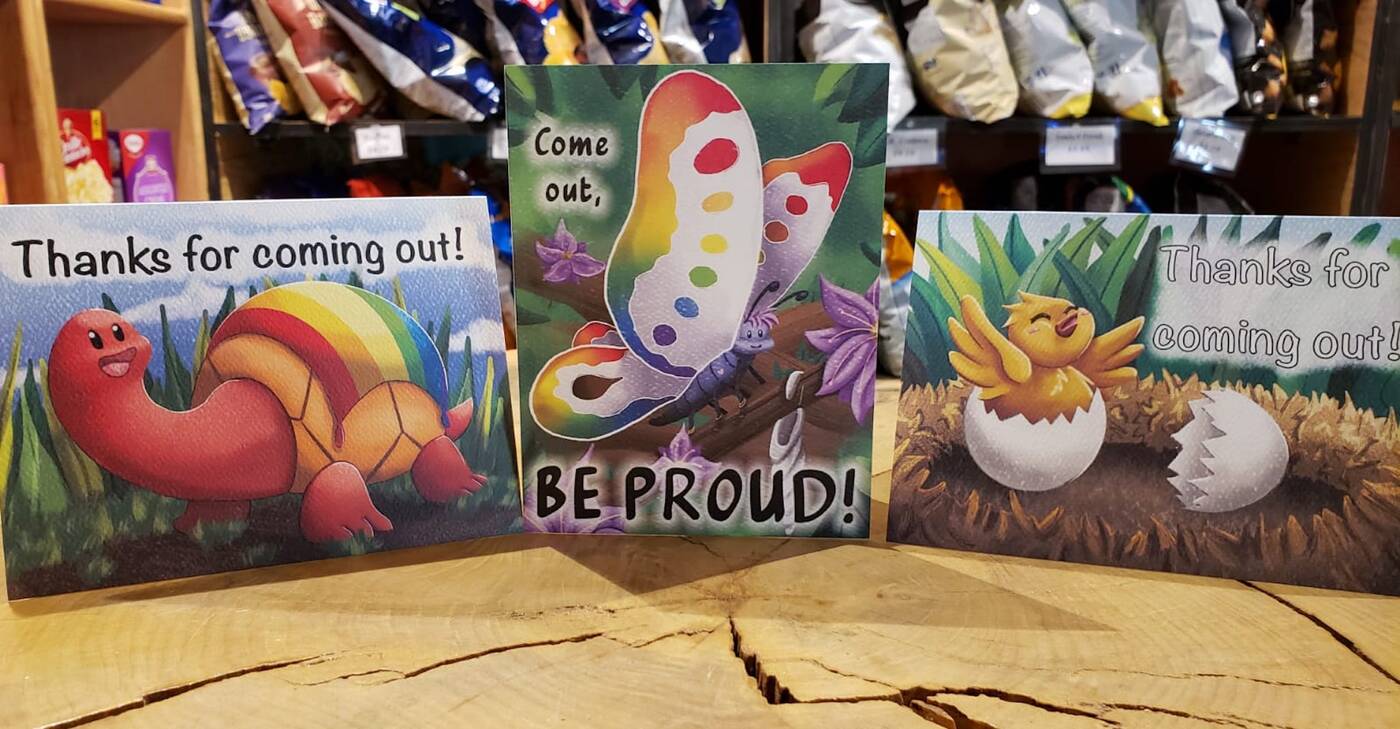 A line of coming out cards sold at the store. Photo sent to blogTO by Zahra Dhanani

"It's all about representation," said Dhanani, explaining that they make a concerted effort to sell mostly artisanal products made by QTBIPOC (queer, trans, Black, Indigenous, People of Colour) creators. "From the books to the novelty items to even the food."

But ensuring QTBIPOC representation is prioritized in the goods they sell is only the tip of the iceberg.

Over the past six years, Dhanani and her partner have hosted countless events and organized a number of actions in protest of pressing social justice issues in Toronto.

Each year, for example, they host a major Orange Shirt Day campaign in support of Anishnawbe Health Toronto during which they work with local schools to provide education around Indigenous realities and residential schools. 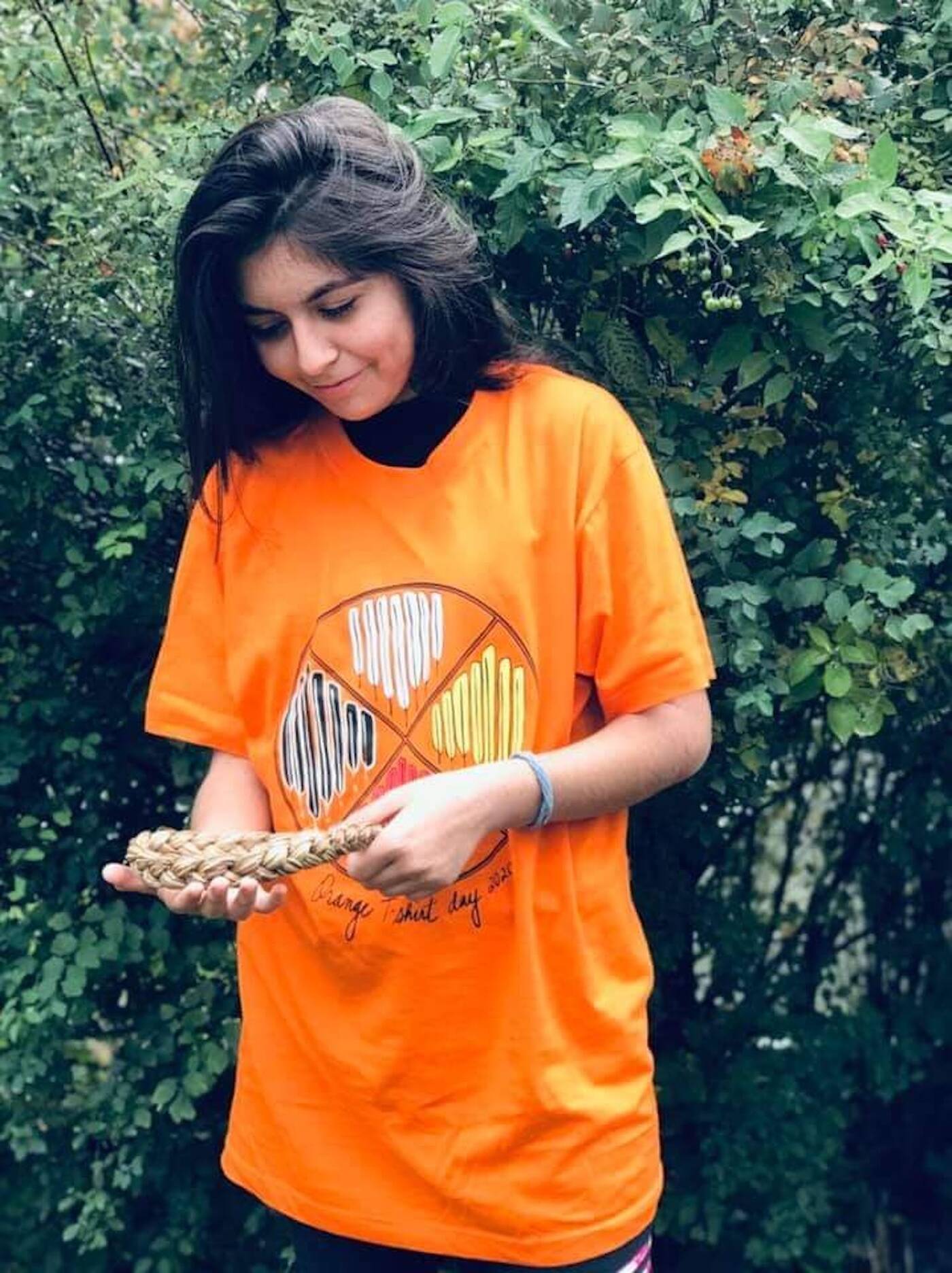 A photo from their Orange Shirt Day campaign. Photo sent to blogTO by Zahra Dhanani

"We've seen amazing, amazing things come out of this," she said, some of which include getting the city to proclaim Orange Shirt day as an official day of commemoration in 2019, getting Mayor John Tory to don an orange shirt himself, and working with teachers to create massive visual displays in schools.

The store also hires a Black Santa Claus for children of the community to visit each Christmas. 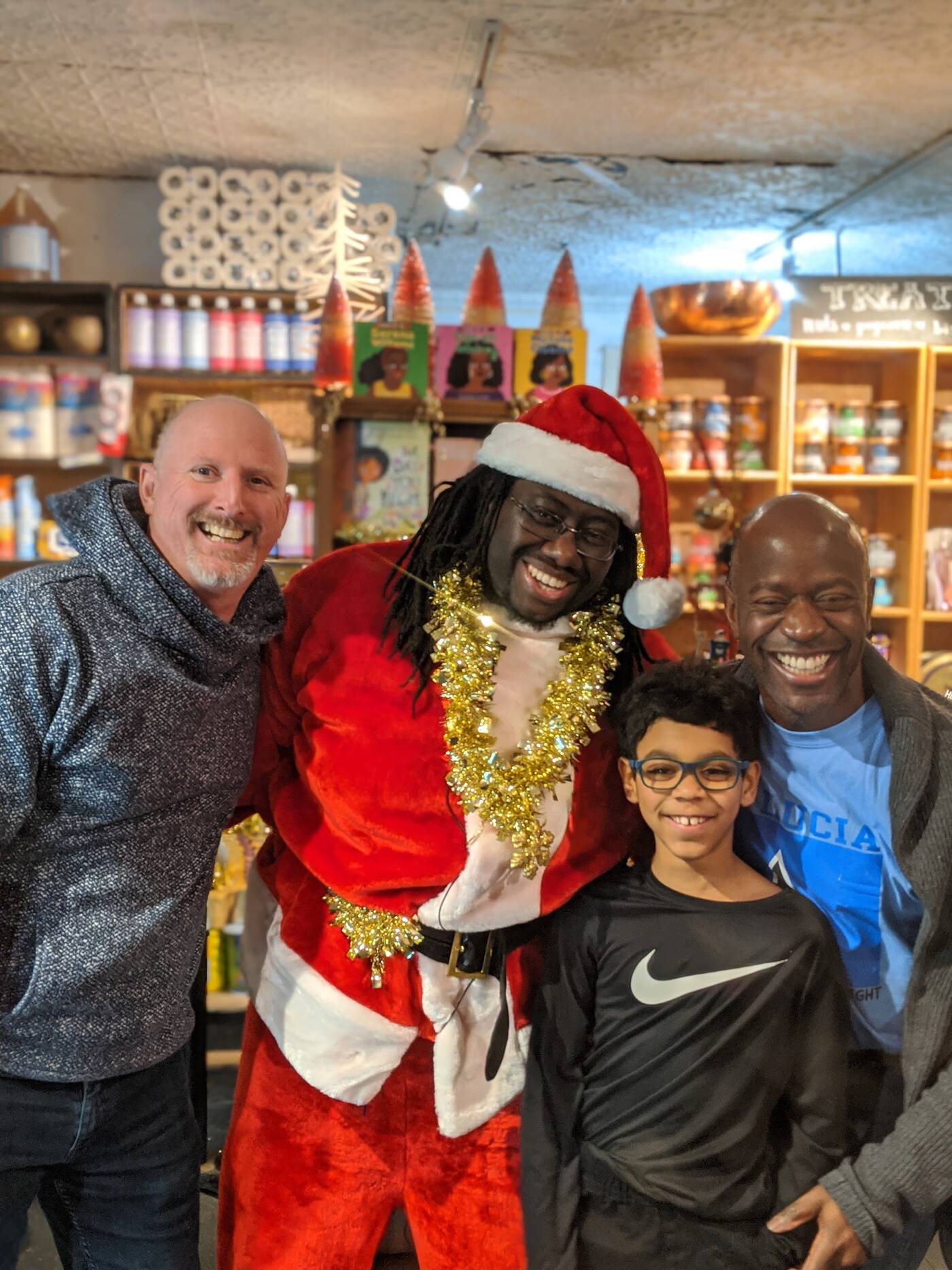 Black Santa Claus visiting with customers at the store. Photo sent to blogTO by Zahra Dhanani

But Dhanani explained that racist incidents have been on the rise in the neighbourhood since they opened the store, and at one point signs saying "White is right" even popped up in multiple parks around the area.

"There's a pretty serious old white hate sentiment in the east end and so we worked with a group of people to create a group called East-Enders Against Racism," she said.

Their most recent objective? Tackling the issue of racism in Toronto's construction industry, which was brought to light when several nooses were found at construction sites throughout the city this past summer.

"As soon as we found out we were mortified, traumatized, totally outraged about the nooses," said Dhanani of the two nooses found at the Michael Garron Hospital Site in June.

Dhanani and her community of activists immediately sprang into action, putting up 416 pieces of art at the Michael Garron site to express their solidarity with Black construction workers. 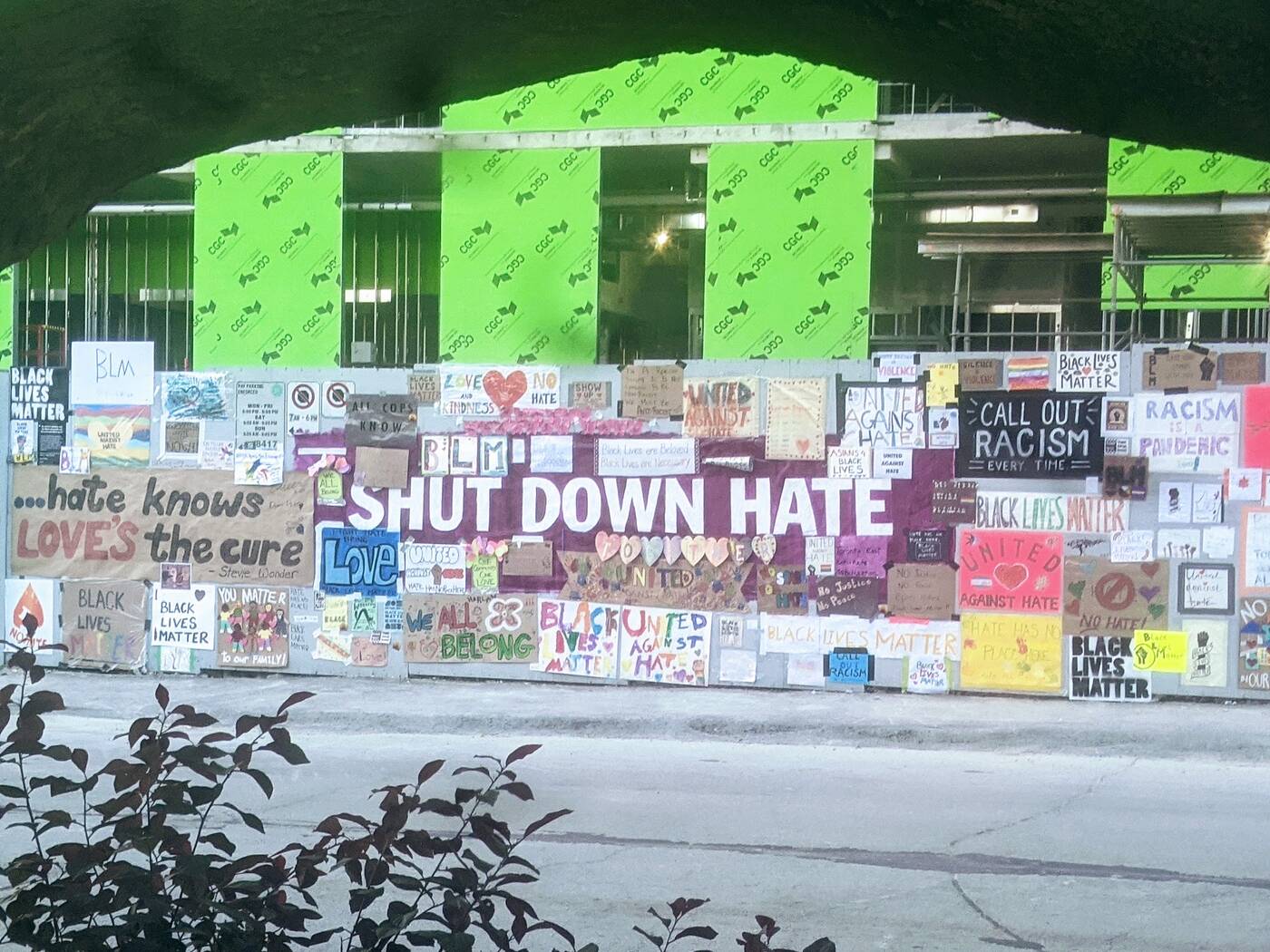 Weeks later, another noose showed up at a construction site in Regent Park, so they joined forces with allied activists in that neighbourhood and held a ceremony with a Black minister, Indigenous elder, and hundreds of spectators on Canada Day.

Dhanani, along with a small group of activists, also decided to look deeper into the issue and actively investigate what's happening in construction.

And after speaking with Black construction workers, they discovered that nooses and other forms of overt racism are actually commonplace within the industry.

So instead of letting it go, they started talking to politicians and putting pressure on the Ministry of Labour to check in on what's happening at these sites.

They've also since met with the mayor, heads of commercial corporations, and construction unions, though Dhanani said their efforts have not yet resulted in the necessary reform due to an obvious lack of will from the parties involved.

"None of these people want to be called out but they are the reasons why this kind of racial hatred has proliferated on these construction sites," she said.

She added that those who commit these heinous crimes often merely get off with a slap on the wrist, if that.

The person who put up the noose at the Crosslinx site, for example, was able to negotiate with the union, and was allowed to simply resign instead of having to face an actual investigation.

In December, the person who put up the nooses at Michael Garron actually confessed, but he was only charged with mischief because Canada's hate crime laws are incredibly narrow, and can only be used if someone is guilty of publicly communicating messages that incite violence against a specific group.

"The hate crimes legislation is so ineffective," she said. "We can't imagine a more obvious symbol of hatred. Nooses are hate crimes." 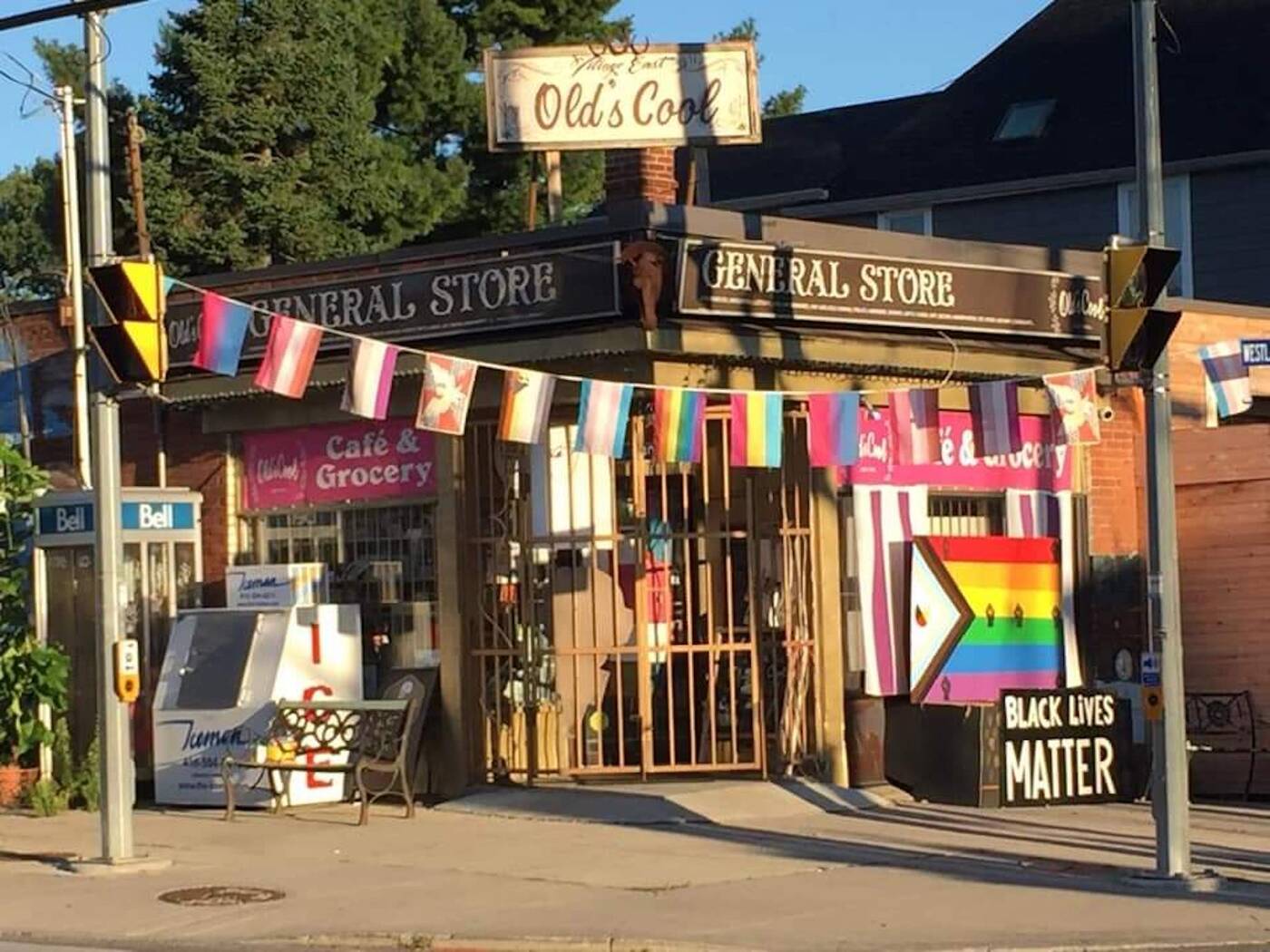 The store decked out in pride and BLM signs. Photo sent to blogTO by Zahra Dhanani

This issue has become one of the primary battles for the Old's Cool General Store activists, and a new group titled Community Solidarity Against Racism in Construction (CSARC) was recently born out of the shop to focus specifically on this fight.

Together with Mothers for Peace Regent Park, the Black Action Defense Committee, and Toronto East Anti-Hate Mobilization, three other local activist groups, thousands of Toronto residents are now fighting for change in the construction industry.

"The whole construction industry has woken up to the fact that… they've been exposed," said Dhanani. "Our ultimate goal is to have an anti-racist oversight committee over corporate construction culture to keep them on their toes and doing their work."

She added: "We want a revamp of the whole hate crime legislation."

But the fight isn't an easy one, and an anti-racism art installation called Strange Fruit: Nooses are Hate Crimes organized by the four groups that was erected outside the 55 Division police station last week was vandalized less than 24 hours after it went up.

Still, the work continues, and Dhanani said she's fueled by the words of all those who've thanked her for providing a much-needed safe space in the community. On the days when it everything feels like an uphill battle, that's what keeps her going. 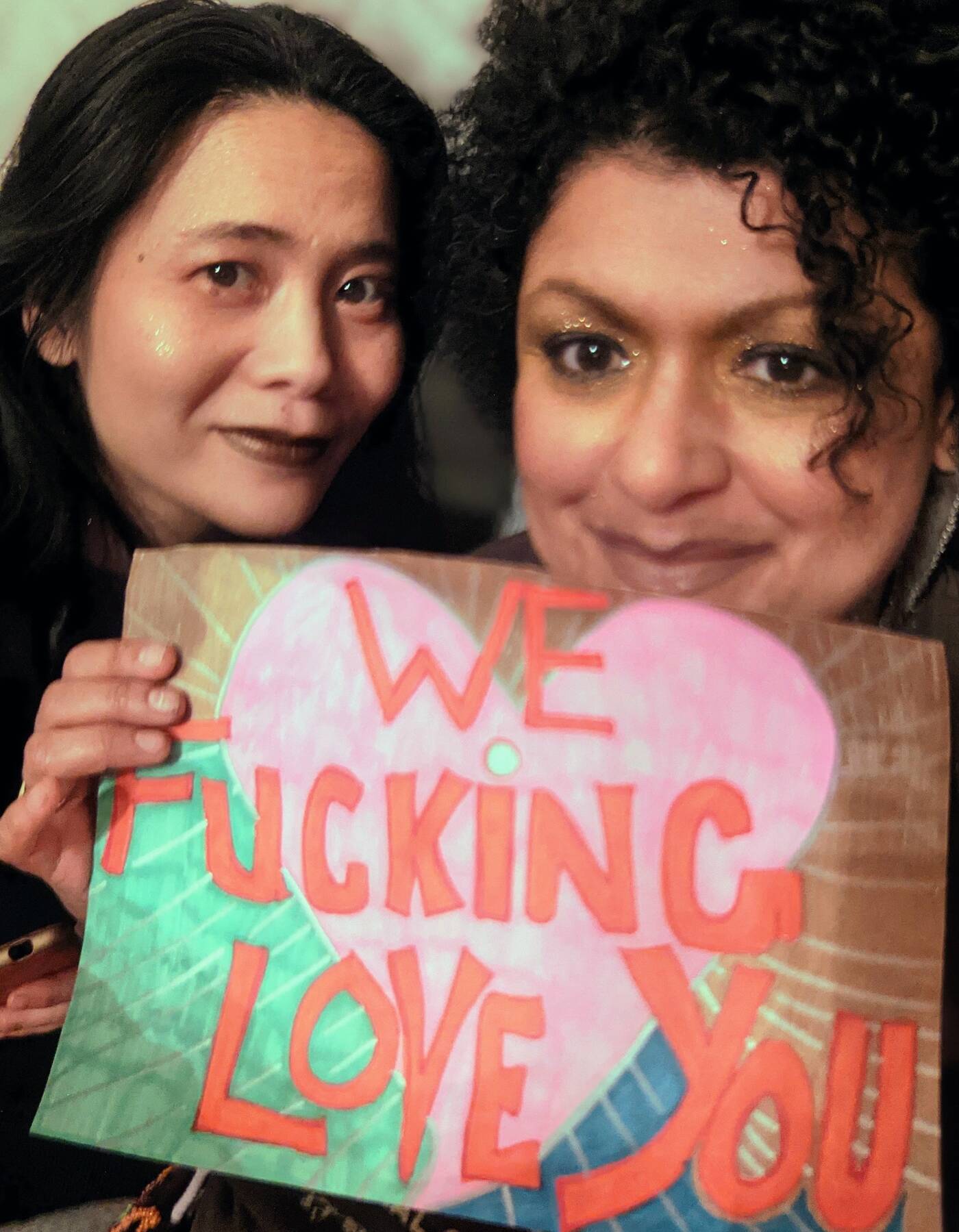 Dhanani and Nguyen-Dhanani thanking their customers. Photo sent to blogTO by Zahra Dhanani

"This all comes from a place of love. Deep, deep love for BIPOC lives. That's what fuels me — great feelings of wanting a humanity that cares for each other. This isn't an agenda. This is human lives we're talking about. They matter."