Calling all Toronto residents who miss your friends right now — forget flowers and send them a parcel of poop to show them you really care.

For the small price of $4.20 plus tax, you can send a package filled with nearly 30 grams of fresh, stinking cow poo to that special someone courtesy of Battleshits.

According to the Toronto company, which launched in early September, it's 2021, so yes, professional poop delivery services are totally a thing.

Run by two Toronto university students and longtime friends — who asked to remain anonymous in this article — Battleshits started as "an eco netural business which would profit from the recycling of something cheaply attainable to us." 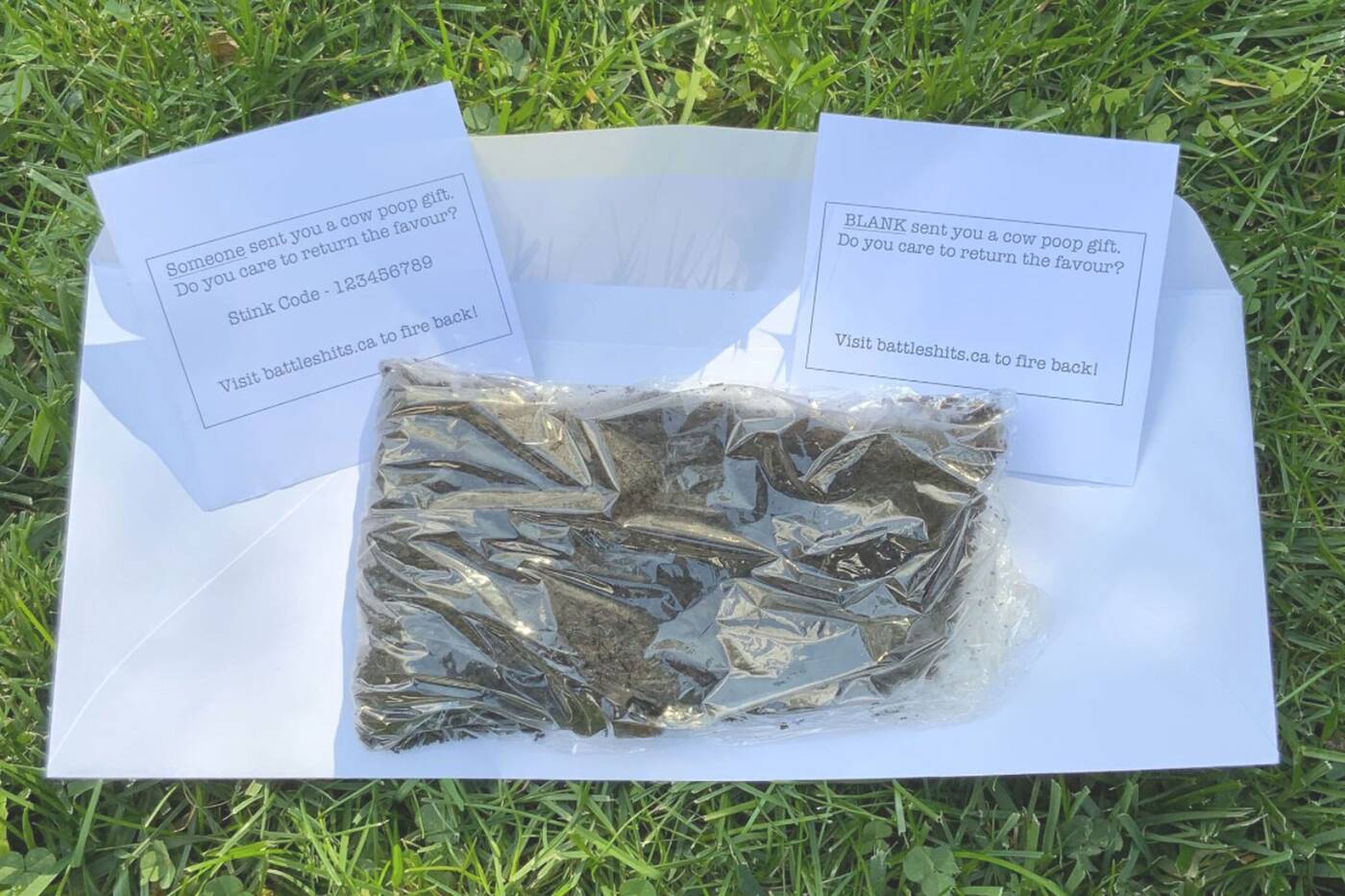 "Our competitors charge (on average) upwards of 10 times what Battleshits chargest for the same service. Our prices poise Battleshits as the cheapest service provider in the industry," they told blogTO.

All you need to do is order online, anonymously if you like, and Battleshits mail one Sh*t Missile via Canada Post in a leak-proof bag.

You can add a message for an extra 50 cents, to really rub it in their faces. A disclaimer in the envelope warns about the stinky-ness and dangers of the excrement when unsealed.

Also included in the envelope is a note: "Someone sent you a cow poop gift. Do you care to return the favour?" And an option for the recipient to "fire back" a cow shit in return.

The incentive for sending a package of bovine bowel excrement to anyone, whether friend, family, or lifelong foe, really varies.

Poop Senders, arguably one of the largest players in the bowl, lists reasons that range from playful to straight up malicious.

There's "your ex", "neighbors pet crapping on your lawn", "a last minute gift for that friend who has everything", or "for that rich gloating friend, knock them down a peg." That's some nasty shit. 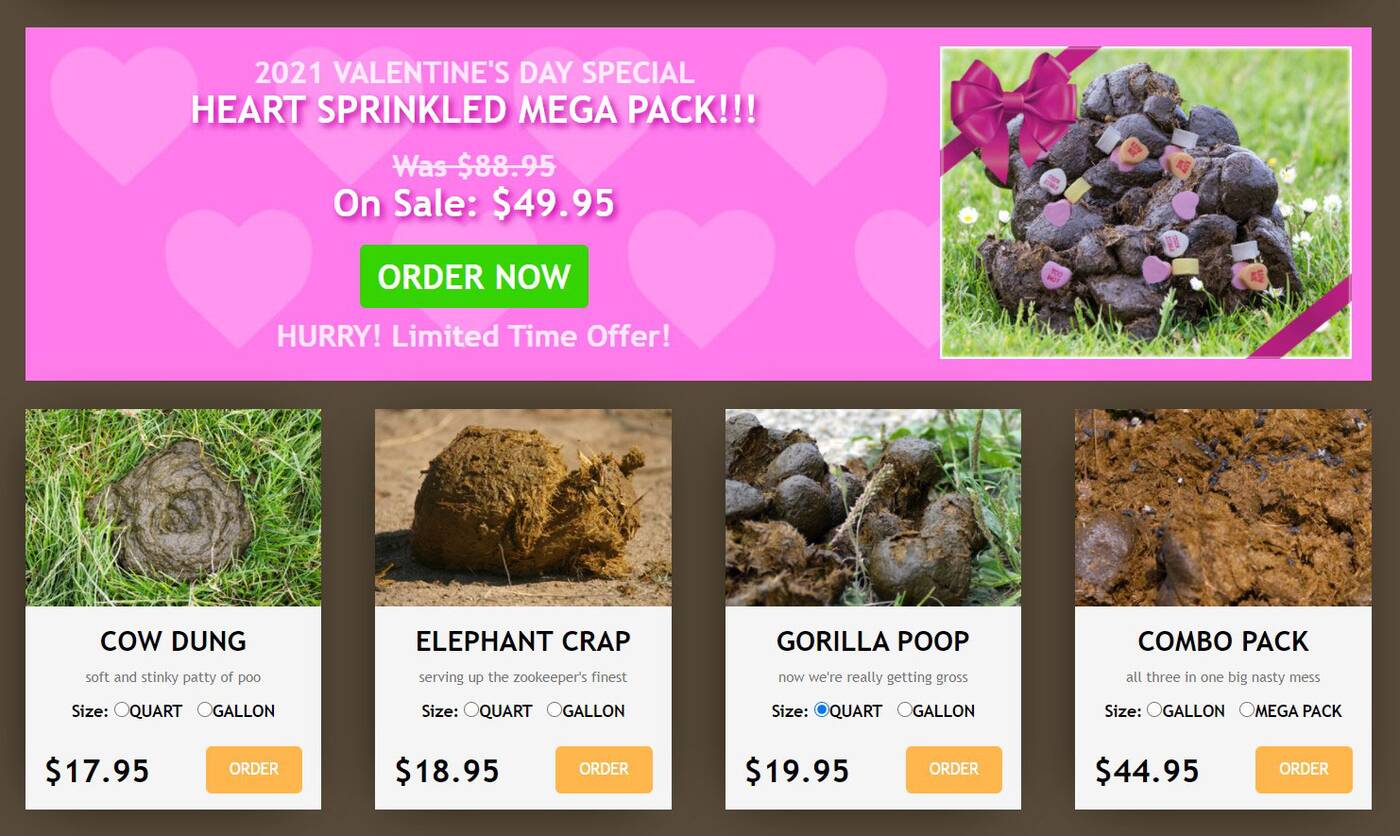 Poop delivery services have been around for several years. The company Poop Senders has a selection that includes elephant crap and gorilla poop. Photo via Poop Senders.

Evidently, there are enough reasons to have funded several poop delivery services worldwide, some of which have been around for years, from I Poop You to horse manure purveyor Shit Express.

That being said, Battleshits does offer a disclaimer on its website.

"You may NOT use our service to threaten, constitute harassment, violate a legal restraint, or any other unlawful purpose. The customer agrees that this is a gag gift, novelty service for entertainment ONLY and that is their only intention."

Unlike companies like Poop Senders, whose fecal selection runs the gamut from quarts of elephant crap to gorilla poop, Battleshits offers only dung from a local dairy farm in Caledon.

"Cow poo is relatively stable compared to other species, it is also abundant and therefore cheaply attainable," said Battleshits' owners.

So far, customers for this gag gift have been "incredibly diverse".

"As of right now, there are slightly more women who order than men," they said.

"Most surprisingly our service is currently being used by people of all age groups, educational and socioeconomic backgrounds. From all over Canada."

One would like to imagine scientists sending this to delighted colleagues for cutting edge fecal experiments.

But really, the goal here is that, like the board game Battleship, senders and recipients can be lured into a stinking back-and-forth of dung-sending, which, like most wars, will just end up being costly and fatal (to someone's ego.)

M0st people throw it away or compost it, though Battleshits owners are hoping someone will be silly enough to make a poop sculpture.

The better option is likely to take that cow dung, use it as an all-purpose fertilizer for your potted plants, and take some time to figure out how you ended up in this stinking mess.