People travelling along the 401 in and around the Greater Toronto Area got a disturbing eyeful earlier this week when a car defaced with racial slurs came careening down the highway.

One of two vehicles being hauled by a nondescript tow truck, the black SUV appeared in poor condition with a missing fuel door as well as some obvious dents and long, deep scratches.

It certainly looked like someone had damaged the vehicle on purpose, which might not have been apparent to casual passersby if the car hadn't been covered in hate speech.

Shocked by what she saw while riding alongside her husband on the 401 near the Ajax GO Station, a local Instagram user named Ann Marie whipped out her phone to record.

The footage she later posted online shows the words "white power" written across the vehicle at least twice, as well as two instances of the word "bitch," and a racist slur targeting people of South Asian descent.

"I looked and I saw white power on the back, I thought immediately 'what?' —  It didn't register. You're in Canada, this isn't happening here," said Ann Marie by phone to blogTO this week.

"We're a very diverse country, and things do happen, but not usually so blatantly," she continued. "I couldn't believe it."

Horrified, Ann Marie's husband got closer so that she could take photos of the incident, which later served to prove, as she put it on Instagram, that "racism is rampant in Canada as well."

"Yup...this one wasn't being 'Canadian' at all" responded one commenter on the post.  "Racism is somewhat subtle here. But that's just horrible! Makes me SO angry!" 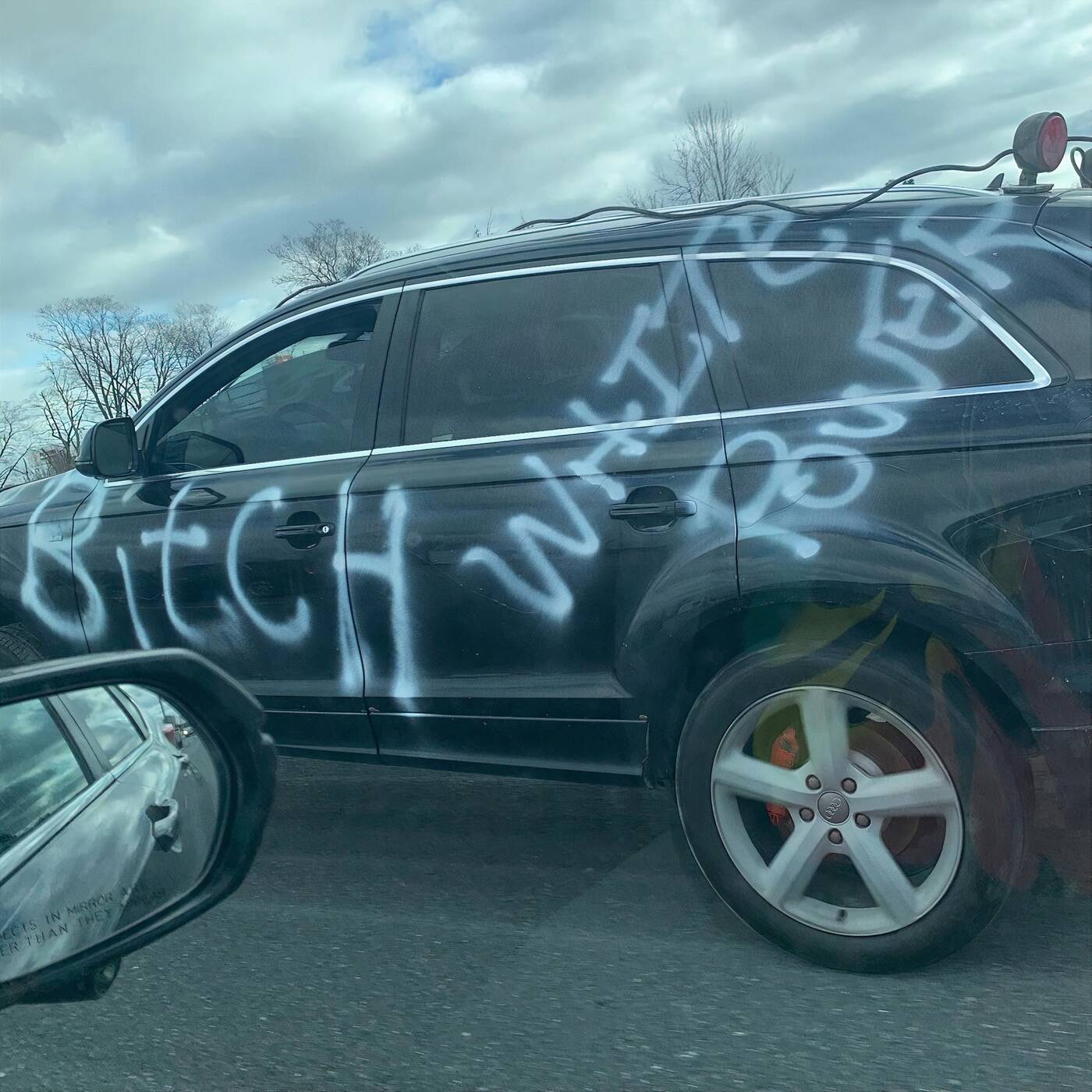 Both sides of the car were totalled, but the one not shown also contained a massive racist slur. Image via ann_marie_mw.

It's not clear how the vehicle came to be defaced or why it was being towed on the 401 this week. When asked if it had something to do with a crime, Ontario Provincial Police said they hadn't received any complaints or calls about the vehicle.

Neither the Toronto Police Service nor Durham Regional Police Service had any immediate information to provide either regarding the vehicle in question.

Whatever was done to the car and for what reason, the sight of it shocked many people on Monday and continues to do so via Instagram.

"Who could have such hate in them?" said Ann Marie to blogTO of the graffiti. "So much hate, and so much time to desecrate the car in such a way."