The divide between rich and poor continues to grow in Canada amid the COVID-19 pandemic, which experts say has exacerbated economic inequality not only here at home, but in nearly every country on the planet.

"History will remember the COVID-19 pandemic for taking over two million lives worldwide. It will remember hundreds of millions being pushed into destitution and poverty," reads a freshly-released and comprehensive report from Oxfam called The Inequality Virus.

"History will also likely remember the pandemic as the first time since records began that inequality rose in virtually every country on Earth at the same time."

Released to coincide with the World Economic Forum's (virtual) Davos Agenda summit, the report concludes that it could take at least 14 times longer for people in poverty to restore their pandemic losses than it has for the world's top 1,000 wealthiest people.

That's right, the aforementioned billionaires have already recouped their fortunes in full (and then some) since March of 2020, while the poorest half of the world will face more than a decade of additional hardship brought on by the pandemic.

"In the first months of the pandemic, a stock market collapse saw billionaires, who are some of the biggest stockholders, experience dramatic reductions in their wealth," reads the Oxfam report.

"Yet this setback was short-lived. Within nine months, the top 1,000 billionaires, mainly white men, had recovered all the wealth they had lost. With unprecedented support from governments for their economies, the stock market has been booming, driving up billionaire wealth, even while the real economy faces the deepest recession in a century."

Across the world, the wealth of billionaires increased by roughly $3.9 trillion between March and December of 2020.

"Their total wealth now stands at $11.95 trillion," writes Oxfam, "which is equivalent to what G20 governments have spent in response to the pandemic." 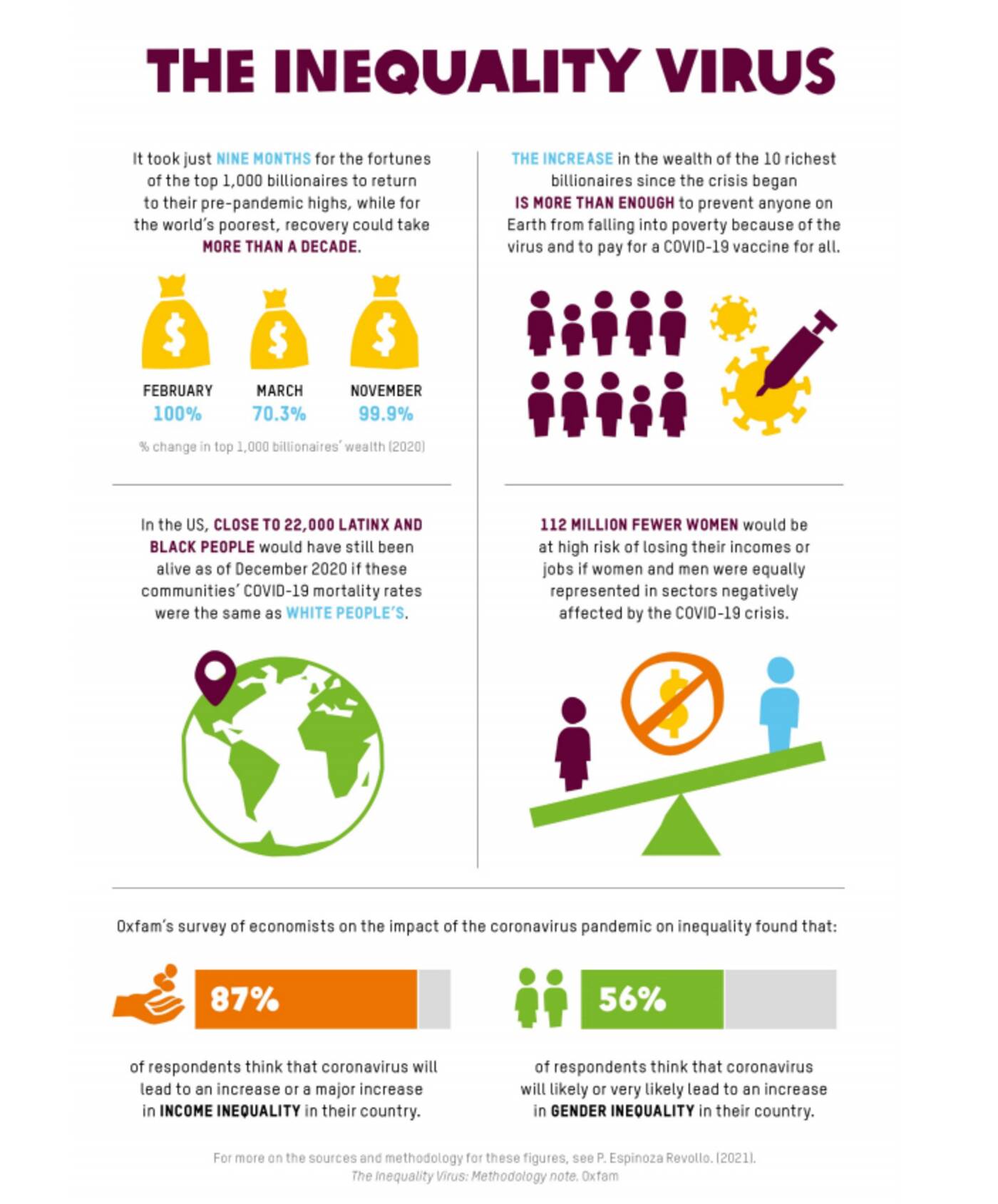 In Canada specifically, billionaires have increased their fortunes by a collective $63.5 billion since March. Considering that the country has only 44 billionaires in total, that's a staggering sum of money — one that Oxfam estimates would be enough to give every one of the 3.8 million poorest Canadians a cheque for $16,823.

"We stand to witness the greatest rise in inequality since records began. The deep divide between the rich and poor is proving as deadly as the virus," said Diana Sarosi, director of policy and campaigns for Oxfam Canada, in a release announcing the report on Monday.

The pandemic has furthermore led to "an explosion in unpaid care work, which is done predominantly by women," but COVID-19 is not the reason behind extreme inequality — the virus has merely worsened and exposed an already dire situation.

"COVID-19 has been likened to an x-ray, revealing fractures in the fragile skeleton of the societies we have built," UN Secretary General Antonio Guterres is quoted as saying in Oxfam's new report.

"It is exposing fallacies and falsehoods everywhere: The lie that free markets can deliver healthcare for all; The fiction that unpaid care work is not work; The delusion that we live in a post-racist world; The myth that we are all in the same boat."

"While we are all floating on the same sea, it's clear that some are in super yachts, while others are clinging to the drifting debris," says Guterres.

As for what can be done to shrink the wealth gap and lift millions out of poverty, experts cited by Oxfam feel confident that the pandemic has given the world an opportunity to change.

"Now is the time to rip up the rulebook, and invest in policies that will build a more equal, inclusive and sustainable world. Now is the time to dismantle structural racism and patriarchy, and design democratic processes which ensure that the rights of all people," reads the report.

"More than anything, now is the time for governments to take specific and concrete actions that will build towards that better future."