New COVID-19 modelling data has just been released by Ontario's top health experts, who suggest that a few more weeks of radical lockdowns could help to curb the province's COVID-19 case count.

This is despite the fact that weeks of such measures in hotspot regions such as Toronto and Peel have done seemingly little to diminish the more than 2,000 new cases per day we've been seeing lately among a population of 14.5 million.

According to the report from Ontario's COVID-19 science advisory table, which was shared on Monday, based on the fact that hospitalizations and ICU admissions have respectively climbed 69.3 per cent and 83.1 per cent in the last four weeks, the province is projected to surpass a milestone of 300 coronavirus patients in the ICU within the next ten days. 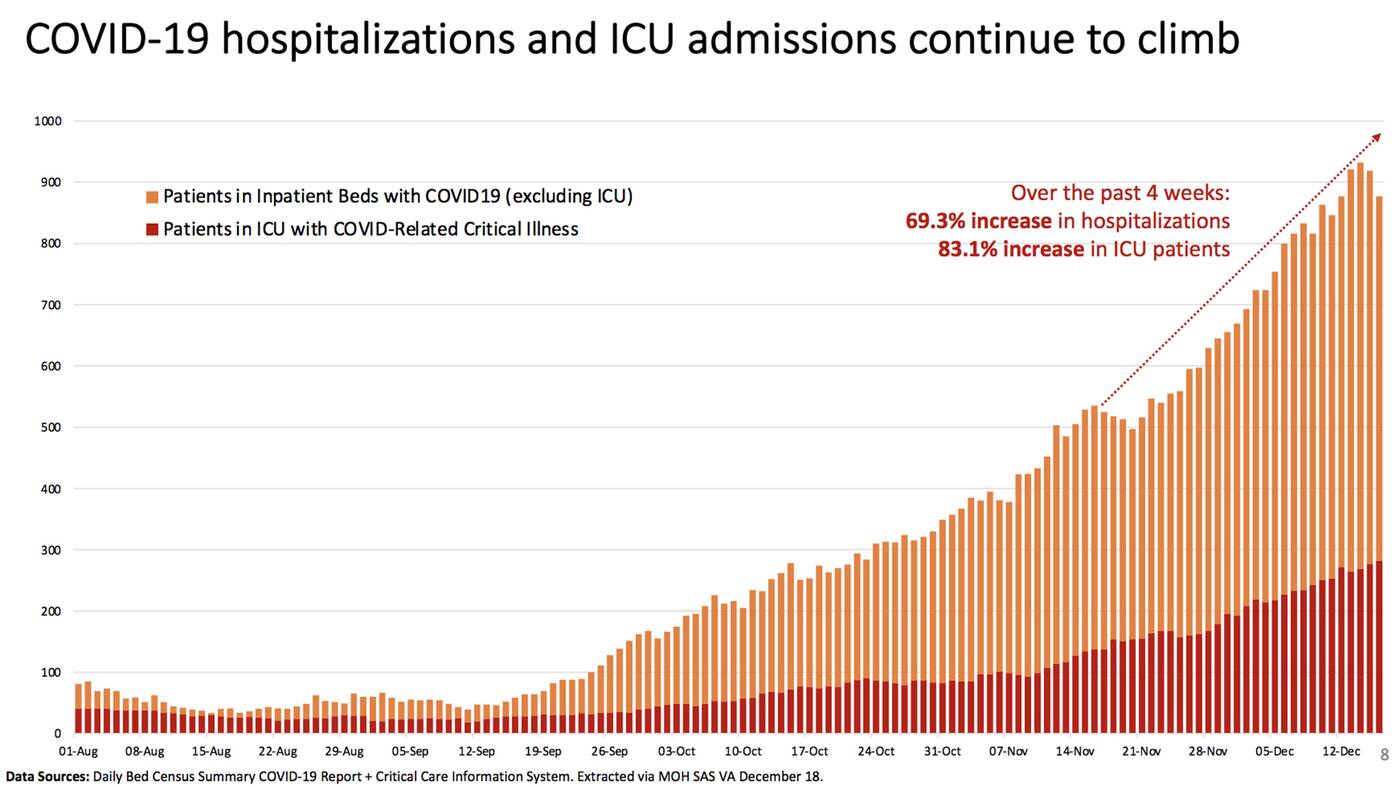 This number may hit 1,500 by halfway through next month, the officials say, which is substantially below our capacity but can create staffing and other resource issues depending on geographic distribution of patients, and can impact the ability to help the other types of emergency patients that comprise 75 per cent of ICU admissions.

They also predict a continuing increase of deaths, most of which are taking place among residents 80 and over, in part due to the ongoing outbreak risk at long-term care homes.

According to the latest release from the government, at current, there are 915 COVID-19 patients requiring acute care, 265 of which are in the ICU, and 152 of which require a ventilator in Ontario.

#BREAKING - New provincial modelling data paints a troubling picture when it comes to hospitalizations. 300 ICU beds are projected to be in use within 10 days & potentially as many as 1,500 by mid January. It notes “Hard lock-downs” of 4-6 weeks have been positive elsewhere. pic.twitter.com/8Q5q1mfMI7

Other numbers include a potential 3,000 to 5,000 new infections per day by the end of next month if the virus continues to spread at its current rate, and a staggering 30,000 new cases per day if there is more substantial spread, with a growth of 7 per cent.

"The duration of lockdown is very important," the table's co-chair said at a presser about the projections this afternoon.

"A very stringent lockdown with very strong communication of four to six weeks can reduce case numbers in Ontario." 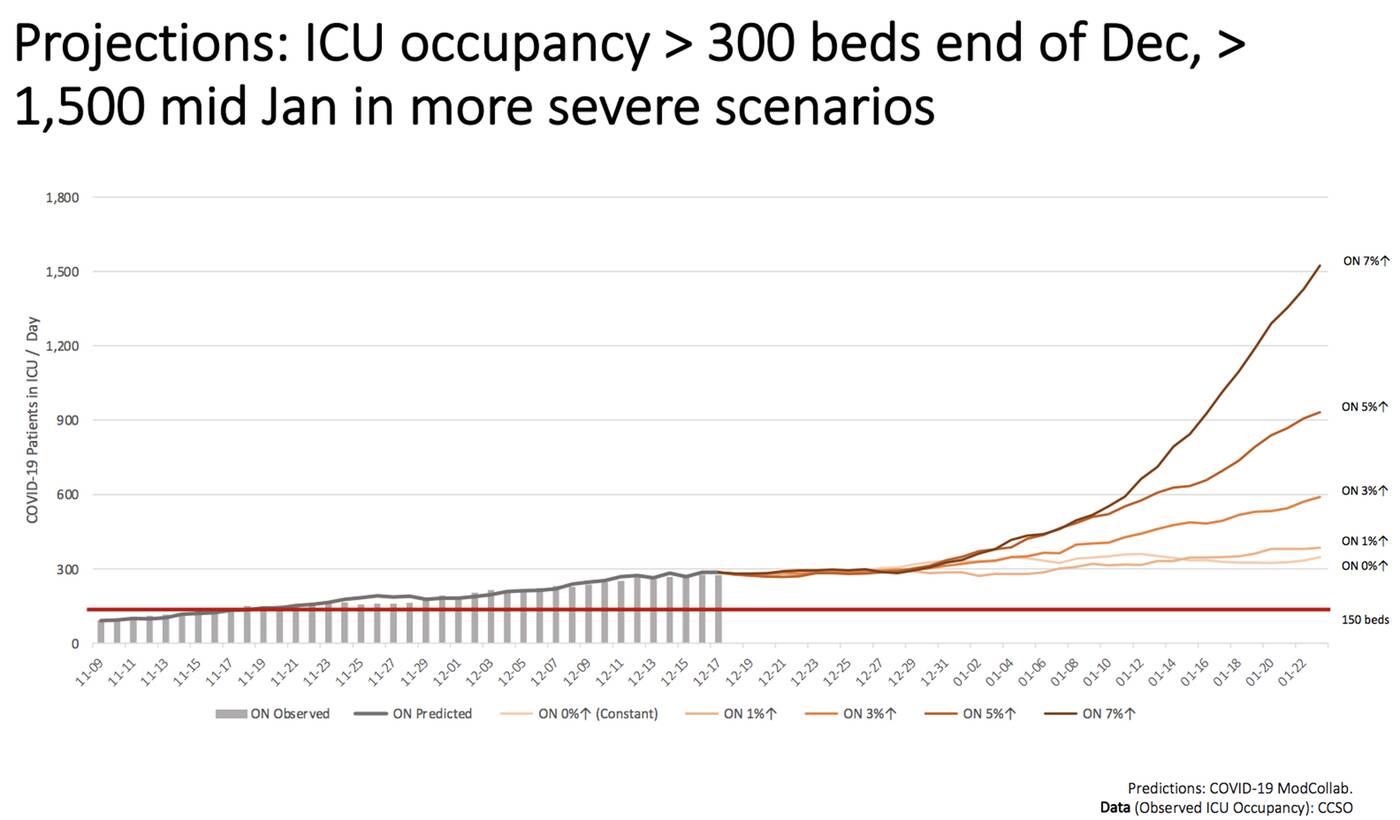 It is in part the success of extremely rigid restrictions in comparable cities that prompted experts to make such suggestions, such as Melbourne, Australia's massive shutdown, which included a curfew and prevented residents from travelling further than five kilometres from their home.

Some deemed the rules draconian and a violation of human rights and freedoms, but they worked. 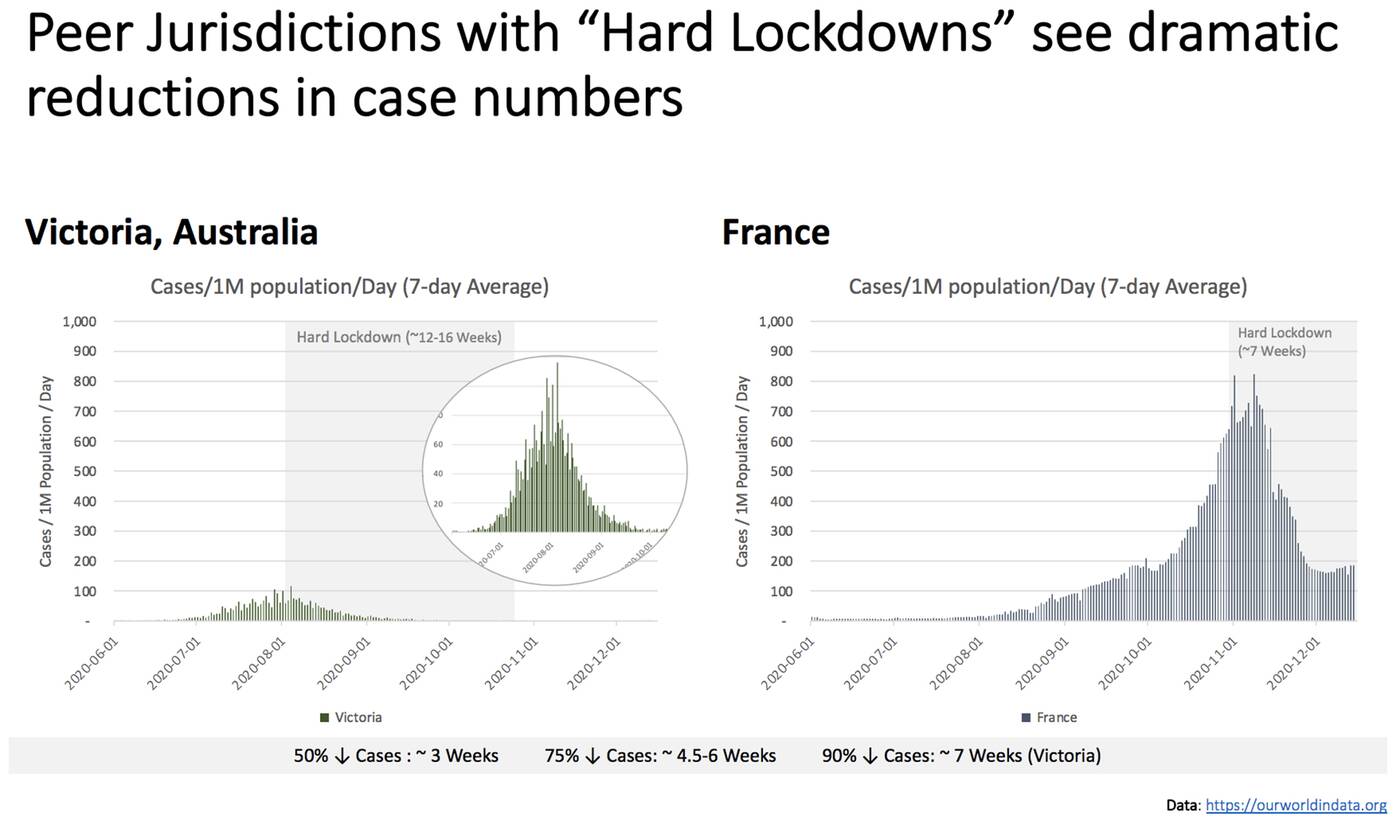 A severe four-week lockdown is exactly what Premier Doug Ford and his team announced for the entire province today, at least for the more dense southern parts. Those regions north of the Sudbury area, which is a four hour drive from Toronto, will instead be locked down for two weeks to start.