Along the west end of Trinity Bellwoods Park, on the soft, muddy expanse of land between the playground and the seniors supportive living facility, there exists Bruce Lee City, a quiet settlement of about fifteen tents and tiny shelters encamped in a loose circle around a bare Scotch Elm.

In the grey-brown chill of early December, the utility blues and oranges of the tents are difficult to miss.

The shelter closest to the footpath — which this afternoon is lightly bustling with joggers, delivery bikers, and nannies pushing expensive perambulators — is covered in graffiti tags: the number 420, Beastie Boys lyrics, and the silhouette of a white squirrel.

It's next to a brown leatherette couch with the words RIP BRANDON painted on its side in lurid teal. By the couch is a waist-high Christmas tree, hung sparingly with a few baubles, some fabric, and a miniature football helmet.

Leaning against the shelter is an illustrated poster of Bruce Lee from the climax of Enter The Dragon, arms poised to strike, torso red with claw marks. In the bottom-right of a poster, someone has scrawled a salutation: "Welcome to Bruce Lee City." 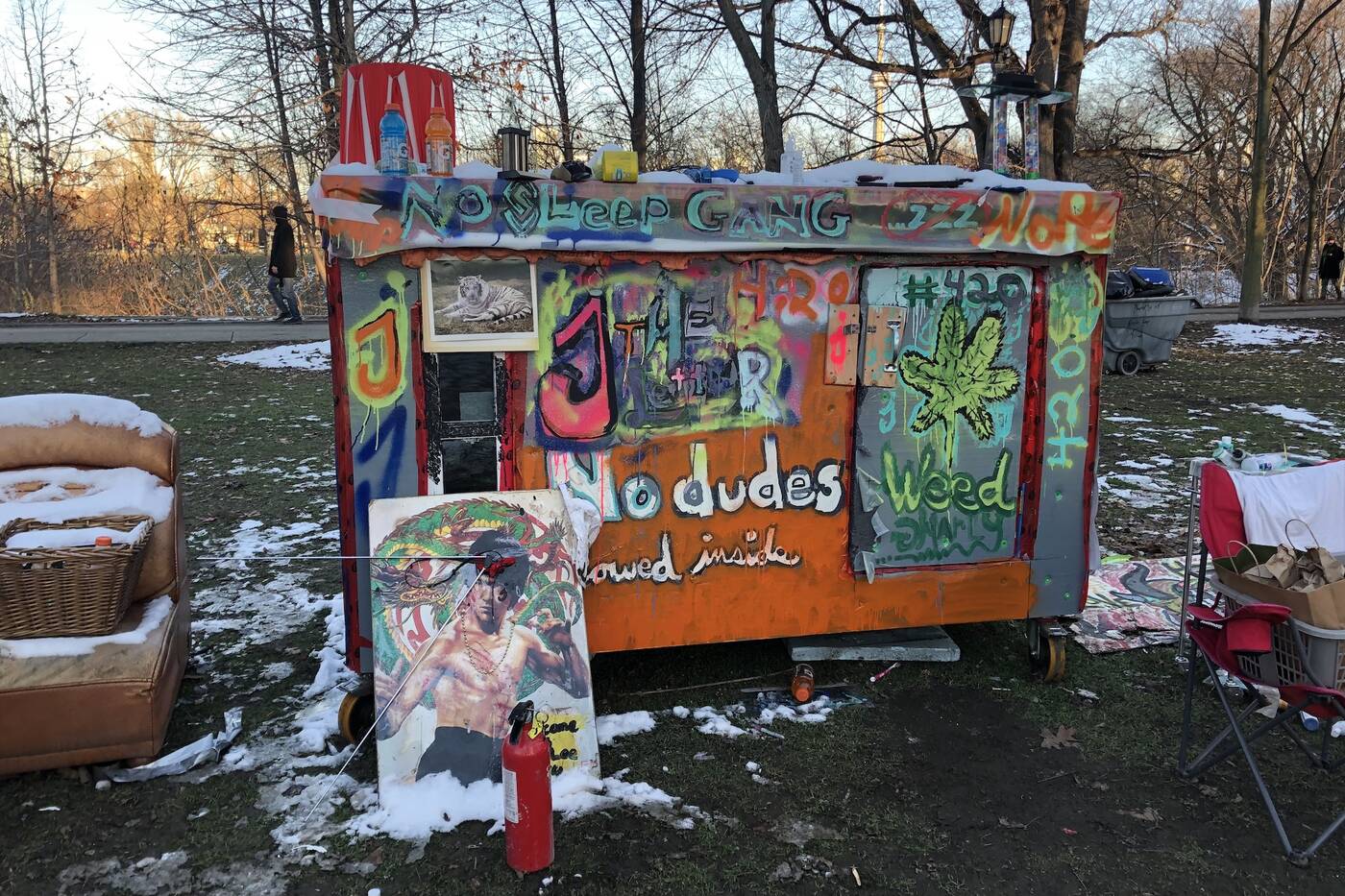 When I first meet J the Letter, he's wearing a floppy wool toque and winter jacket, rummaging through his shelter for a sweater to give to a man waiting nearby. He sees me approaching and waves me over; when he realizes I'm not there to cause problems, he is immediately warm.

After he gives away the sweater (for which he's effusively thanked) he’s happy to give me some of his time, but only after a change of clothes. Stepping into his tent for a moment, he emerges in a grey blazer and a blue bucket hat emblazoned in a weed-leaf pattern. 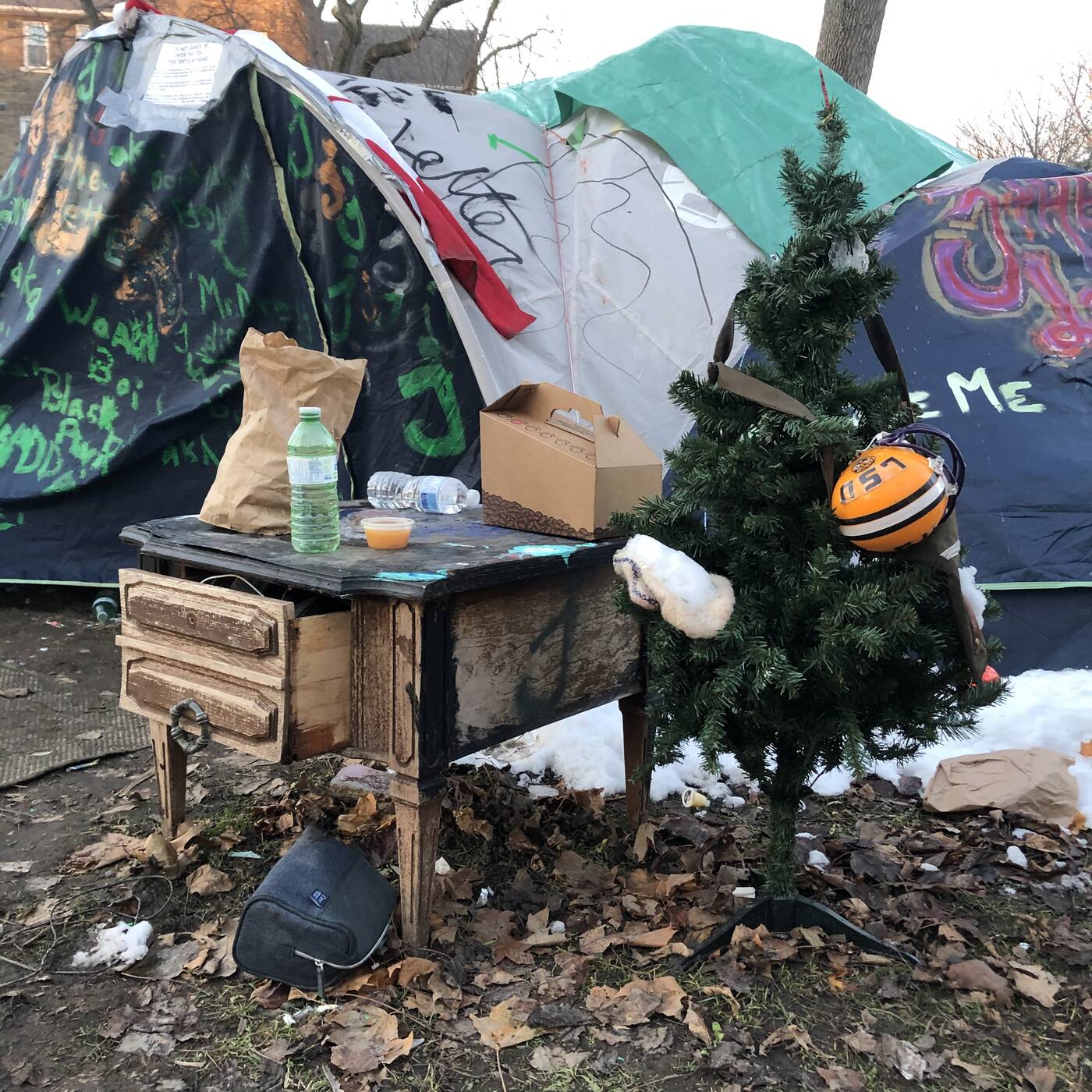 His legal name is Jeremy, but since becoming homeless he has preferred to go by J the Letter or J, which, besides being his initial, is "the youngest of the alphabet." He's 32, and has been living in shelters and the streets since his late twenties. 2020 is his first full year in Toronto.

J the Letter used to live in a suburb just outside of Toronto. He became homeless after the dissolution of a long-term relationship.

"I got to this point in my life from a cocaine addiction. I used to have a family. I was almost married to a woman with kids. They called me dad. I messed it all up by choosing addiction over them," he tells me.

"The only way out for them was for them to sell the house to be safe and taken care of. I sacrificed everything in my life because I couldn’t be their stepdad anymore. We were together for ten years." 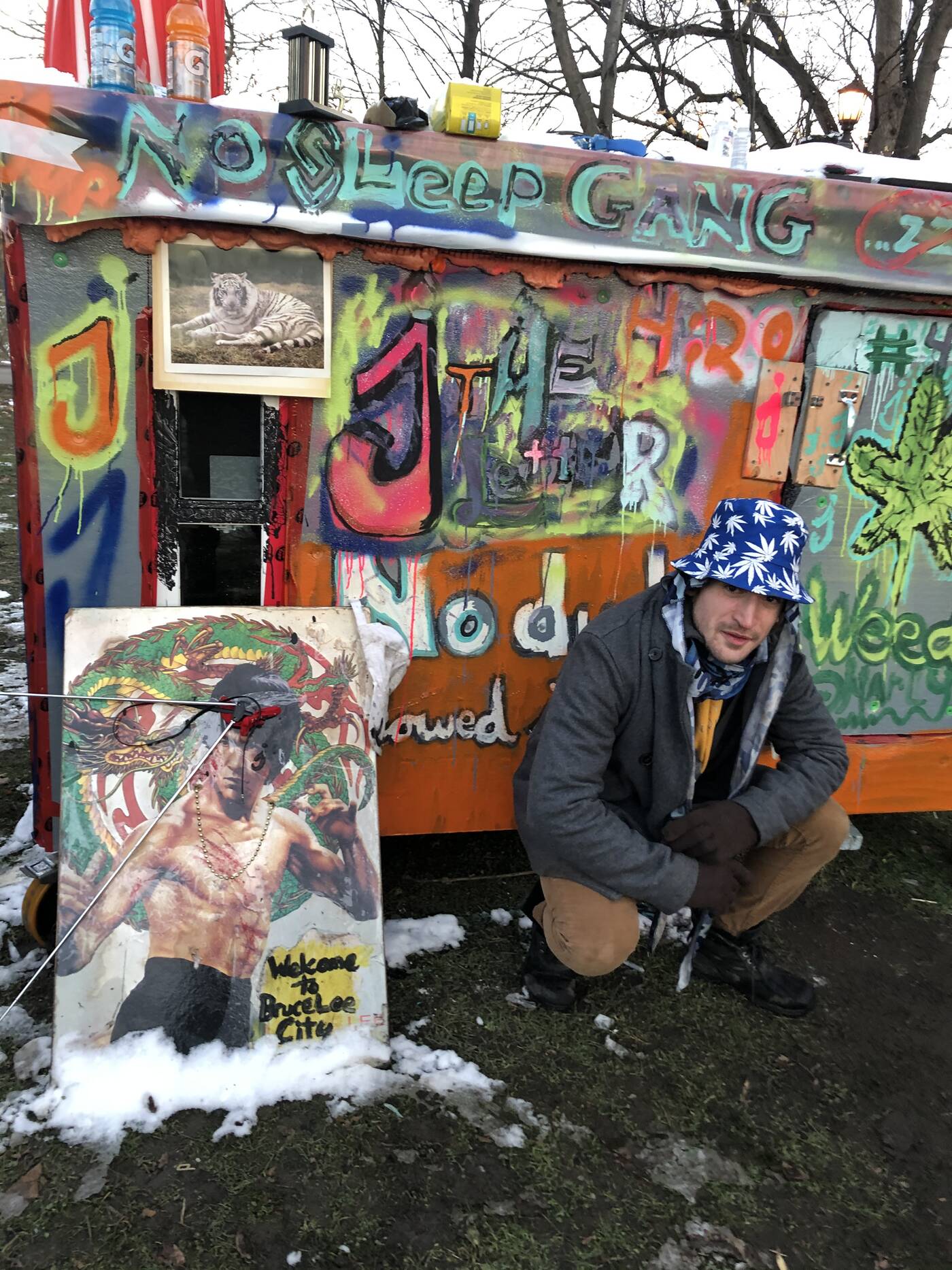 All of the over a dozen tents in Bruce Lee City were J's; because he was finding and being given so many of them, he set up any he wasn't occupying for the use of anyone who needed a place to stay.

All are welcome in the encampment; no one is turned away unless they are causing problems for the others, at which point they are politely asked to leave.

J operates under a five-day rule: if a person doesn't return to their tent for five days, he considers it abandoned and cleans it up for someone else to use.

The City of Toronto operates under a similar MO: an hour prior, officers had cleared out a collapsed and abandoned tent nearby, from an encampment overlooking the park's Dog Bowl.

With it went two other tents whose occupants had left for the afternoon to get something to eat. 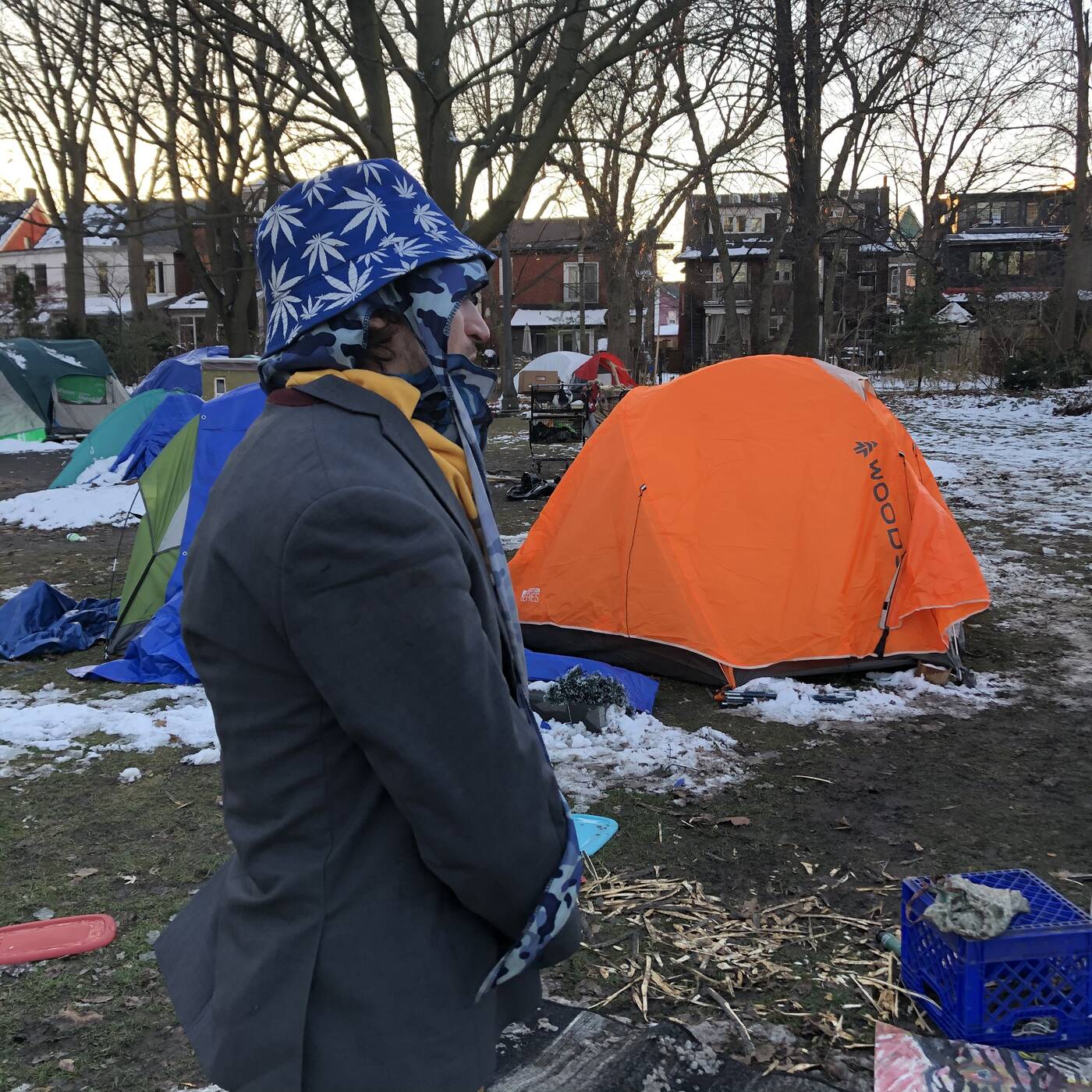 J and the others living in similarly underhoused circumstances survive via community assistance. He walks to The Meeting Place at Queen and Bathurst to do his laundry and occasionally shower, and he uses the bathroom in the Trinity Community Recreation Centre.

He is especially thankful to the Encampment Support Network. "Since tenting started in the spring they've been delivering water, Gatorade, and trail mix every day," he says. "In the summer they brought us ice. We survive on lots of trail mix if we have no food."

The snowstorm the week prior had partially collapsed J's tent: he arose the morning after the collapse to find a package of hand warmers, socks, and a hot plate at his door. Afterwards, he put his tent on skids. "Frozen ground is the number one killer of tents," he says. 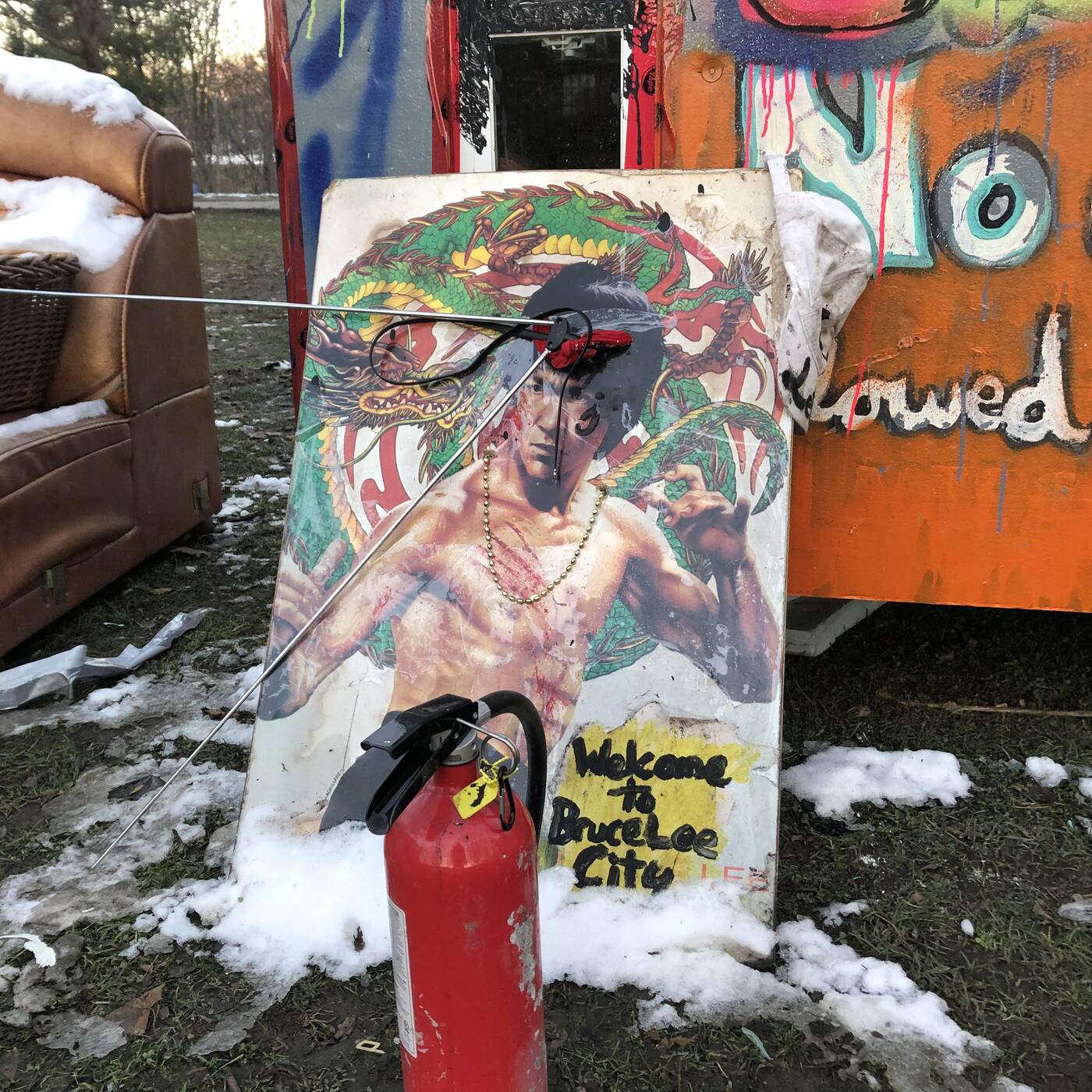 As the weather turns, the Tiny Shelters constructed by Khaleel Sievwright — some of which have now been removed by the city — have become integral. "These things have saved our lives. He made a difference in our lives."

Homeless people in Toronto tend to receive an abundance of clothing donations. J tries to distribute any surplus he has to others who need it. "I'm the type of person that will look after my community and my area. This is a safe park and a safe space," he says.

However, all of J's favourite pieces are found. "I do what we call 'garbage-binning'. I go to nice condos and dig. Anywhere you see a big glass building. As long as they’re not locked up underground, if their bins are outside. I'm not there to make a mess." 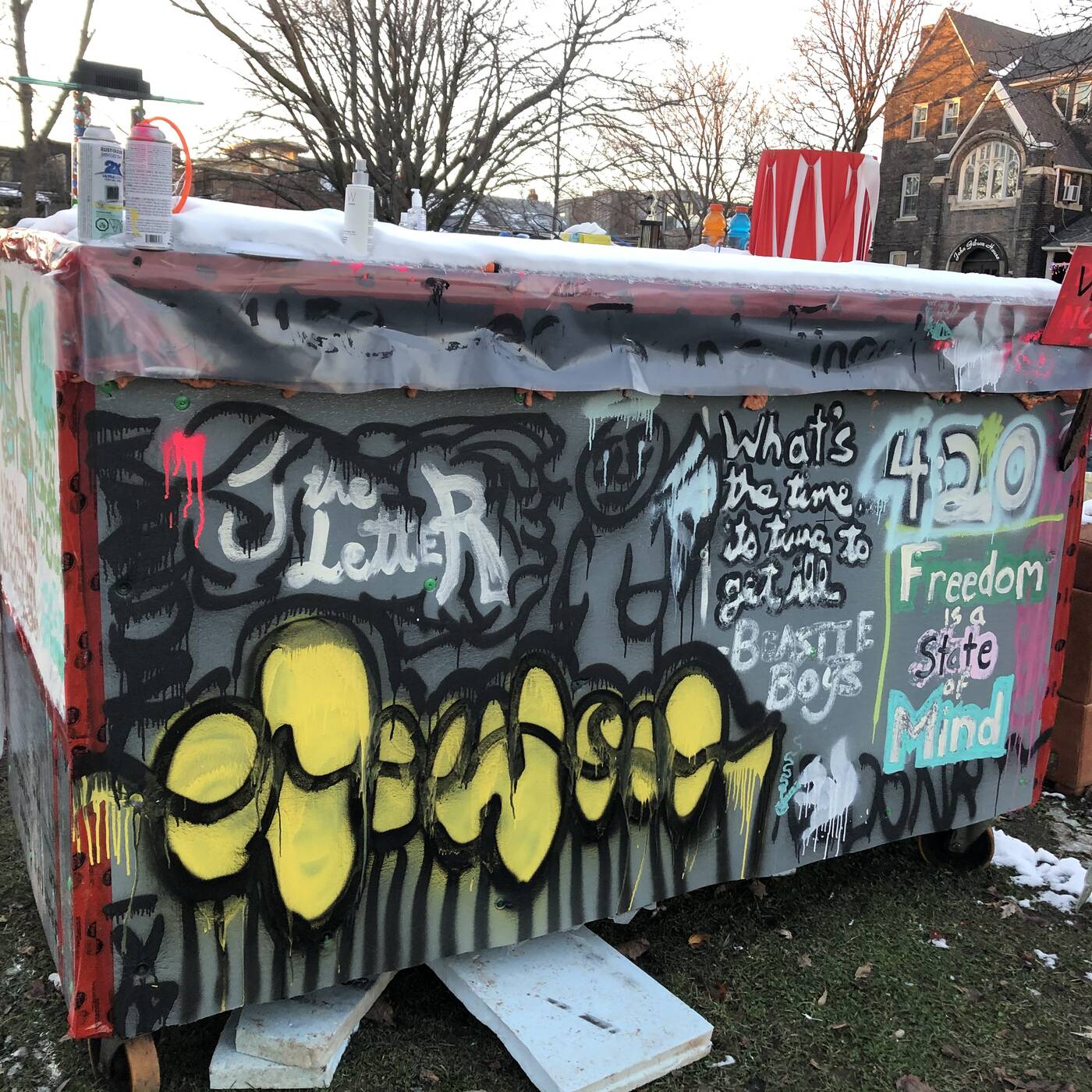 Bruce Lee City was christened by a binning. "My friend and I found the poster at a condo. We brought it back and looked at each other and said 'Bruce Lee Town?'

"One day the Town died and became a City. It had nothing to do with population. It's a place of healing, for everybody that needs time. We all need time to heal, sometimes. Especially at what we call rock bottom. Bruce Lee City's the place to be." 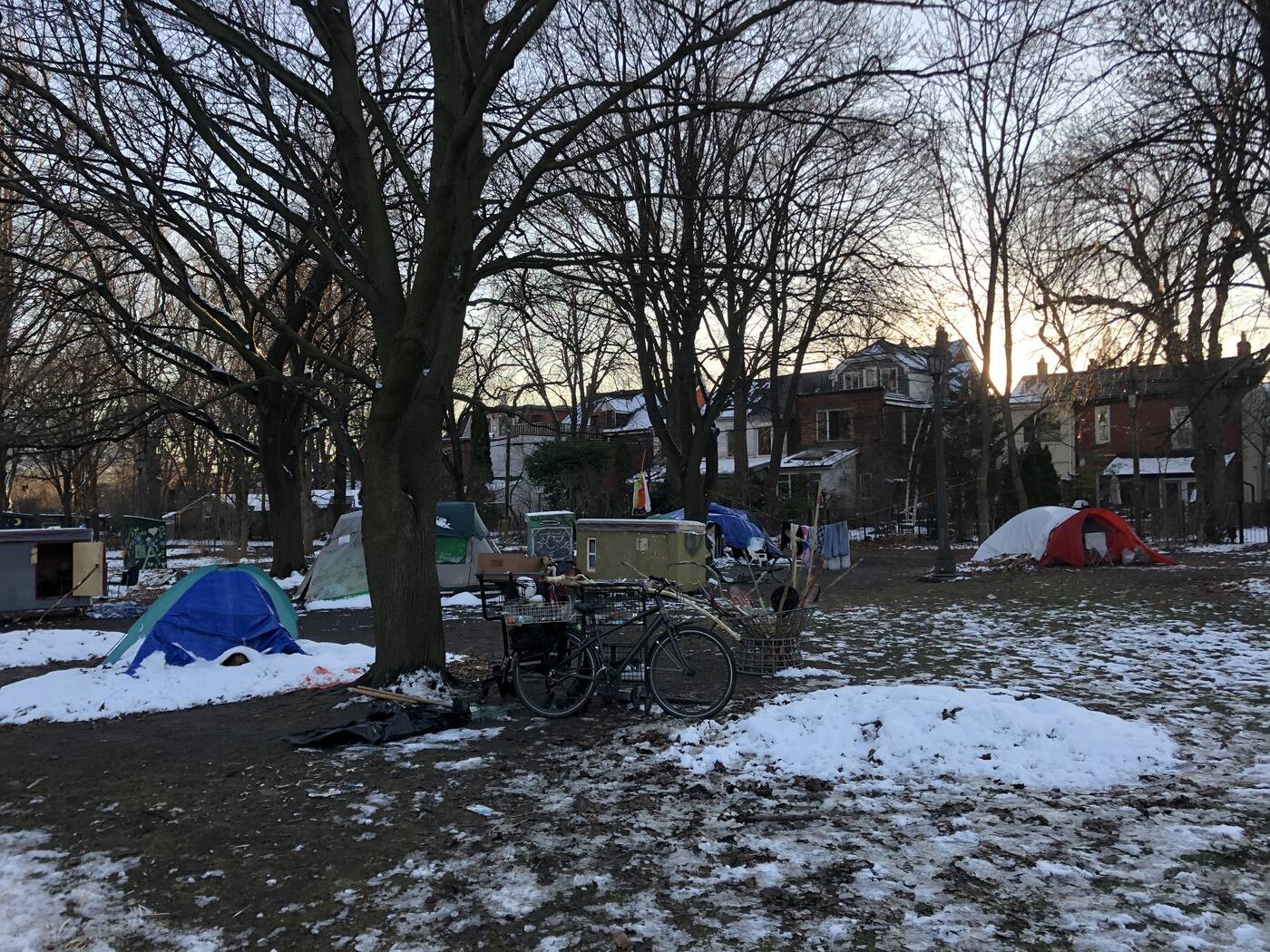 As J and I speak, a man named Rob approaches from the Dog Bowl encampment, lamenting that the officers had taken his cookware and his garbage can. J offers him his spare can, motioning to a pile of furniture in a rolling bin nearby.

As Rob leaves to look, J mentions that his friend DJ Shaker died in the Dog Bowl in the autumn of a fentanyl overdose. He points toward the venerable Grey Alder at the lip of the pit, by which a squat French Bulldog is presently barking manically. "I look at that tree and I see him," he says.

We walk to the elm in the middle of Bruce Lee City, under which he has placed the frame of a papasan. It’s racked with his staff collection: Chinatown bamboo, tennis racquets, and exceptionally large branches.

He pulls one out. It's ornate — partially painted, with a guard fashioned from a smaller, more pliable branch. "This is the Brandon Stick," he says. 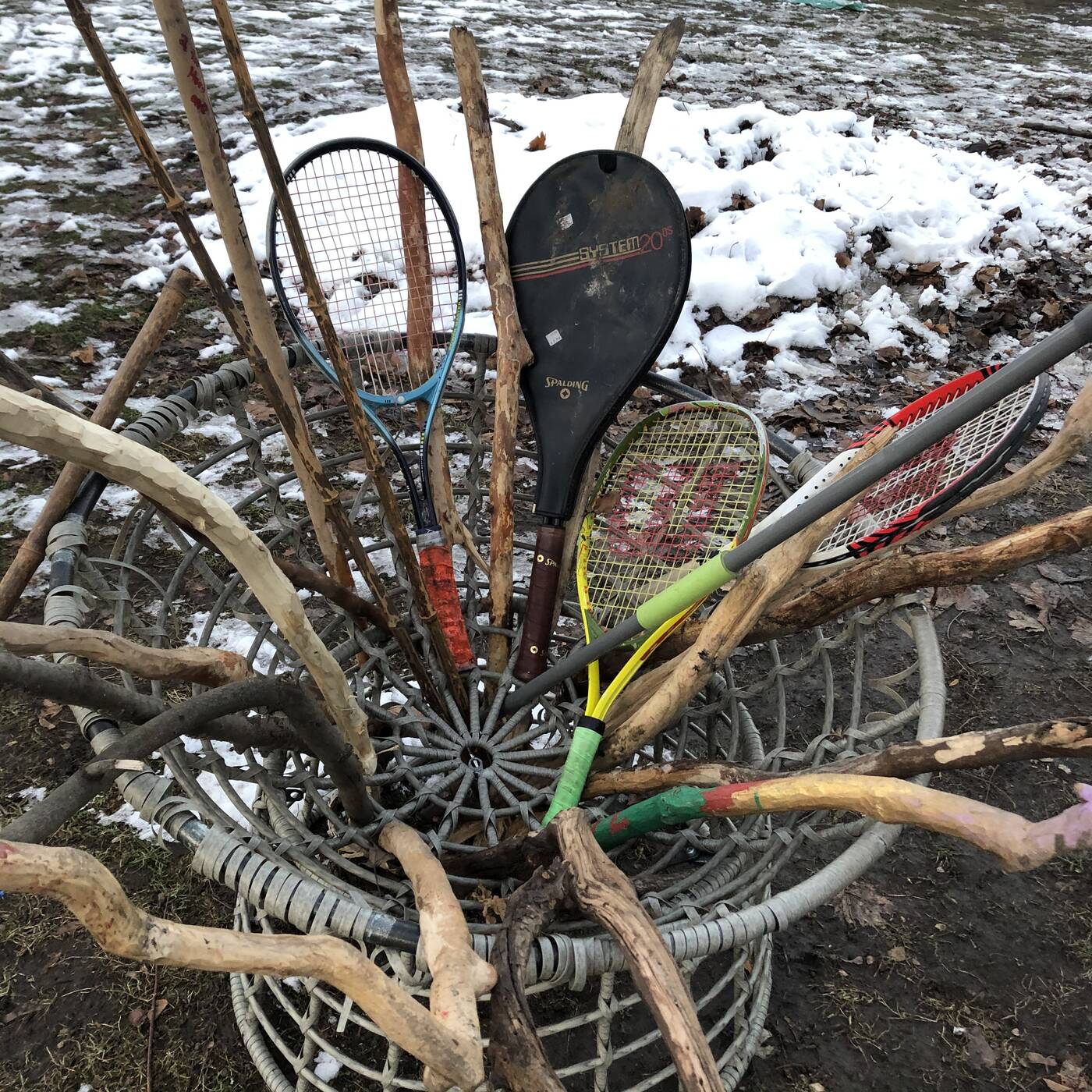 Less than two weeks ago, Brandon had helped him carry a discarded brown couch in excellent condition to the encampment. He died the next night. The couch now sits next to J's tiny shelter; he'd painted RIP BRANDON on it after his death.

"His name was Brandon Kelly. I miss him so much. A very truthful and honest friend who was a lot of fun.

"He came here that night really, really disoriented, but speaking really, really straight. More straight than he ever spoke before. Every time I used to mention Brandon's name, he would show up the next day. He showed up that night, after I said his name. He said he was going to come back that night. The next time I heard his name, he was dead." 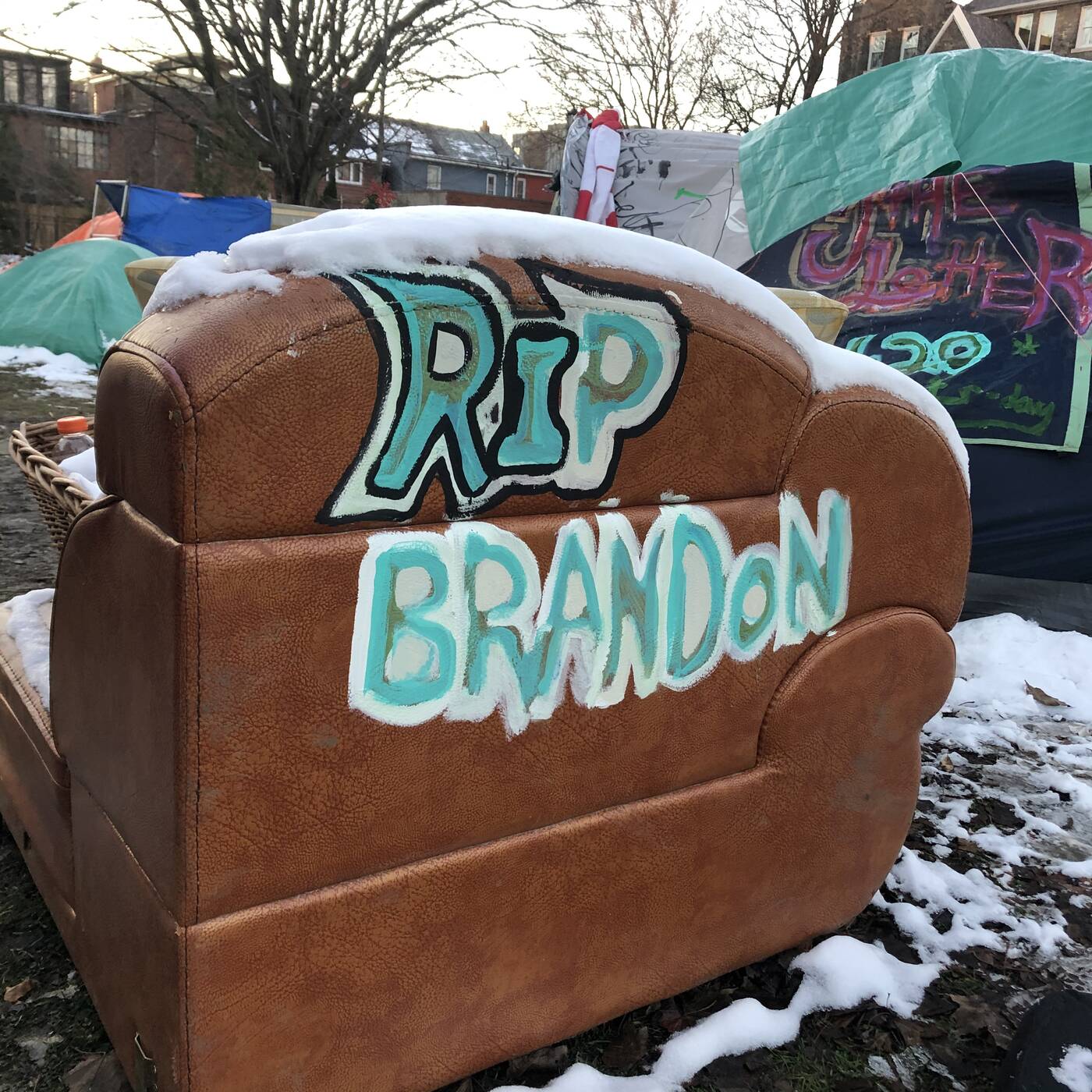 J personally knew at least 25 people who've died from fentanyl. A friend who has been on the streets for longer said a hundred. Another said thousands.

He says he has overdosed once, though he hasn't used the drug many times.

"I am not a fentanyl user any more, but if I see anybody in this park that uses fentanyl, I will not criminalize them for using a drug they got addicted to," he says. 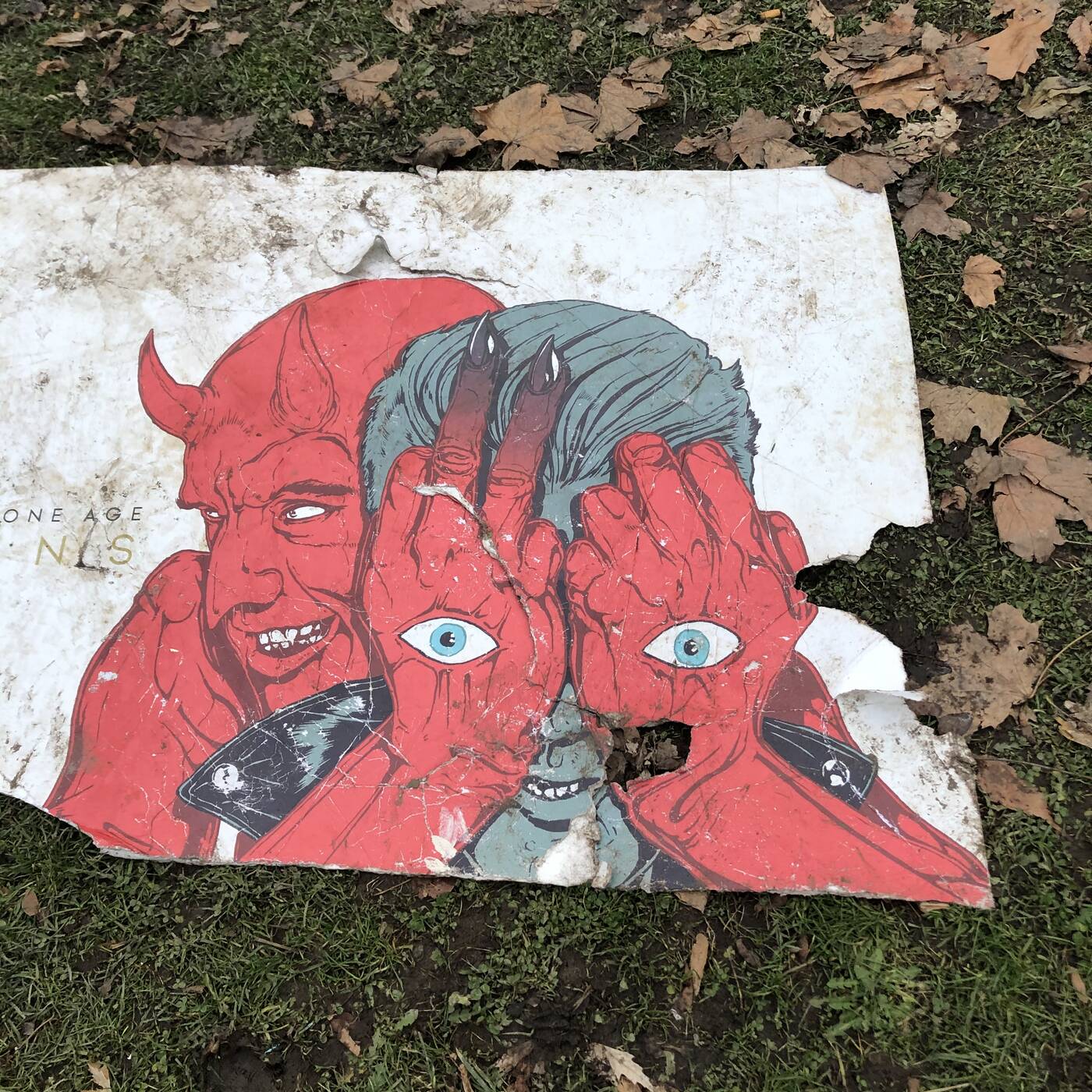 J's overdose was at the St. Felix Centre Respite. He feels unsafe in Toronto's beleaguered shelter system. Thus, he plans to remain encamped outdoors for as long as he can into winter.

"It's not fun being outside in a tent, any night. Every night is hard. Still, there's other people out here. I think I just have to experience it. I've had friends die on these streets."

As the sun is setting on Bruce Lee City in Trinity Bellwoods Park, J the Letter chooses a long, thin piece of bamboo from the papasan frame, pushes up his hat, and smiles. "I guess I have street cred."