The Don Mills Trail, which runs from York Mills Road to Eglinton Avenue East, is home to a walk along the former railway line known as the Leaside Spur.

The trail is situated within the Don Mills neighbourhood of Toronto with none of the trail within Leaside, although that was the destination of the trains that used the former rail line. 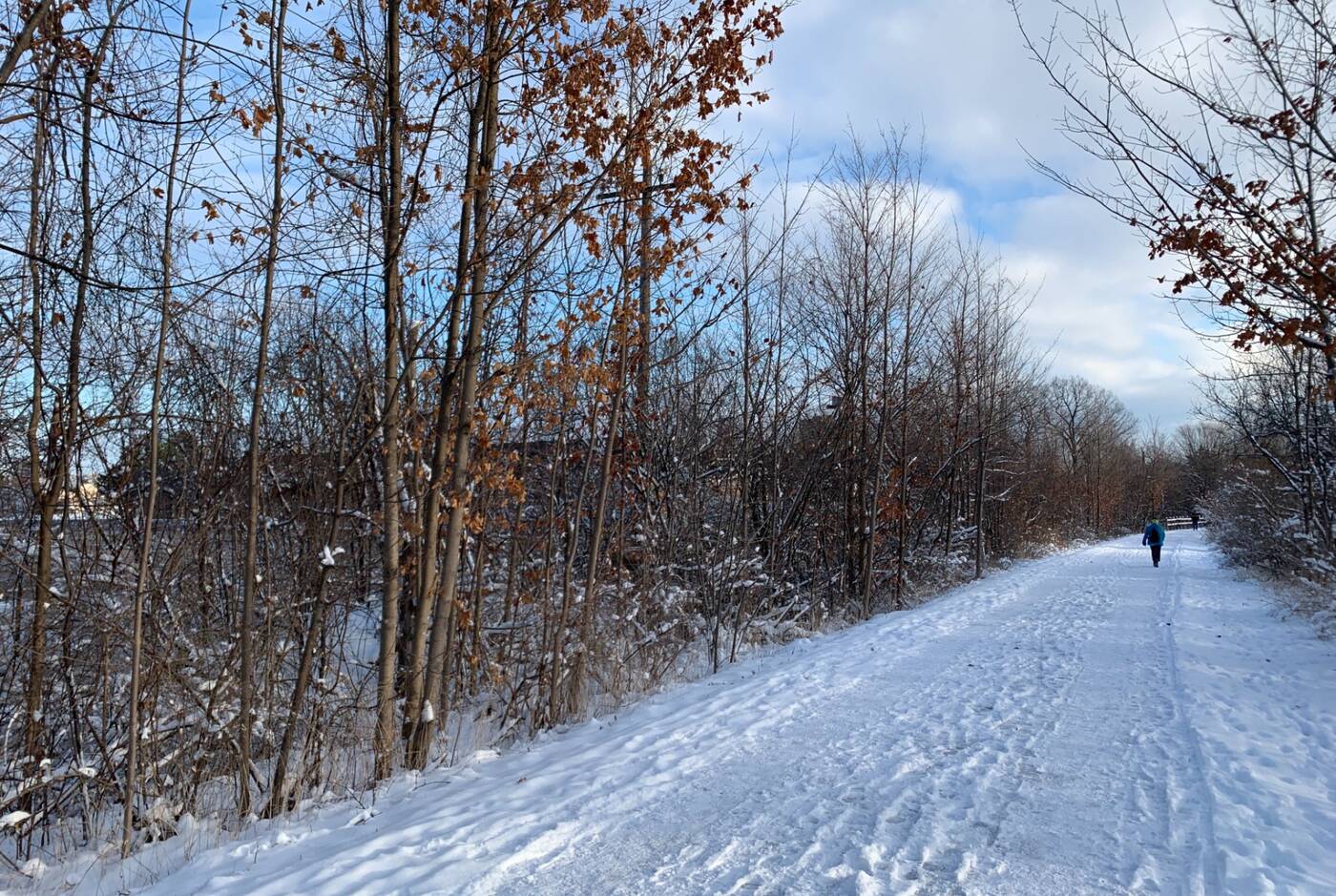 The Don Mills Trail stretches for seven kilometres out and back from York Mills Road to Eglinton Avenue East.

The railroad repair shop used to be located in Leaside at the site of what is now a Longo's store at 93 Laird Drive. There's a historic marker outside indicating the history of the building.

Starting at York Mills Roads and Scarsdale Road behind an LCBO and Longo's parking lot, you wouldn't guess that a trailhead is located here. 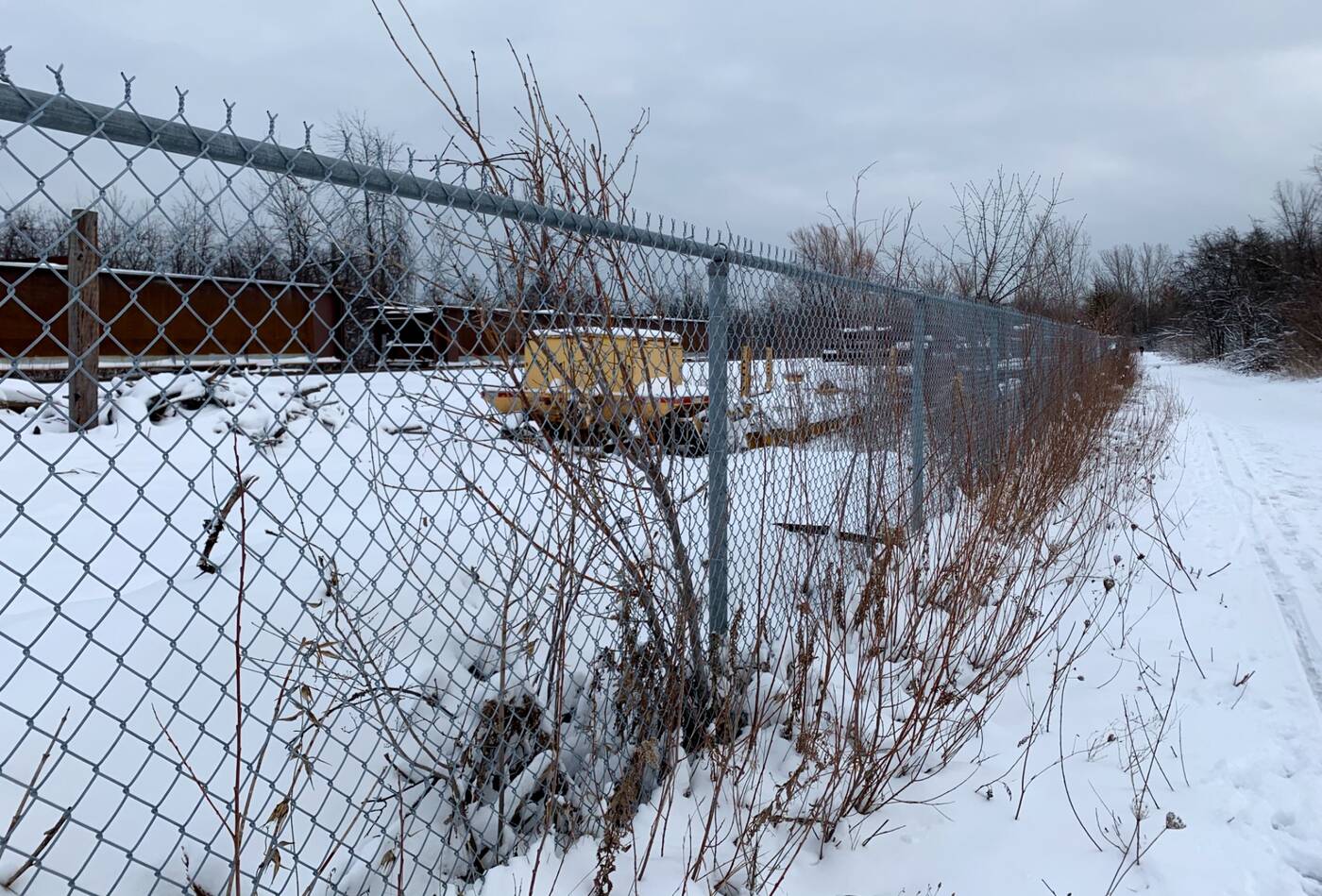 The north end of the trail follows the still-active CNR tracks which are fenced off.

The rail corridor on the north end of the trail makes for a fairly urban walk as it runs parallel to the still-active tracks of the Canadian National Railway (CNR) Bala Division and is bordered by industrial properties. 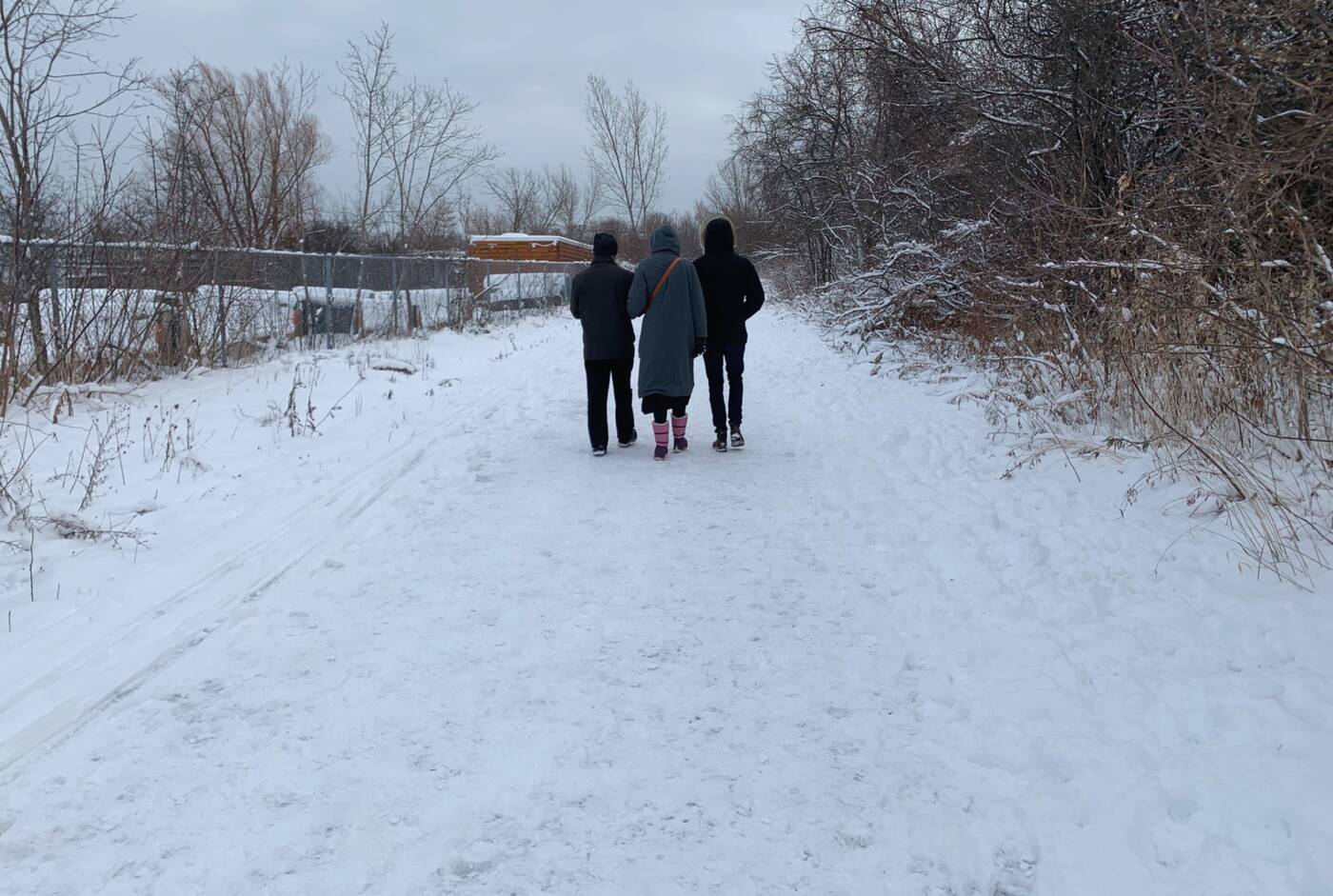 The first portion of the trail is bordered in by a number of industrial and commercial buildings.

The Canadian Northern Railway built the line originally to access the CPR North Toronto Station. Passenger service never occurred, however, and the CNR purchased the spur in 1918. 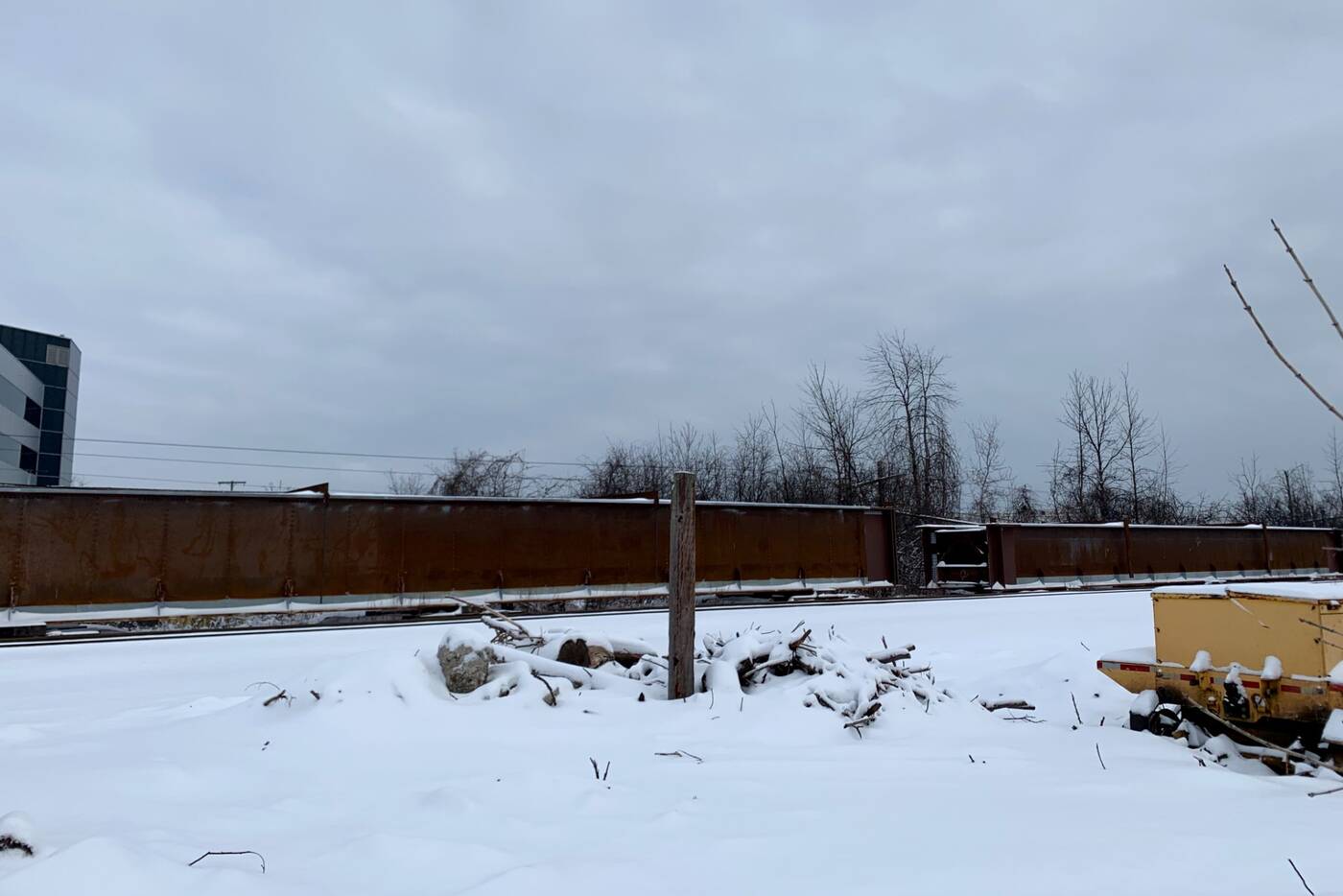 You can easily spot the CNR line nearby if you peek over the fence.

The trail becomes much less industrial toward the south end of the tree-lined pathway as you're led through thicker vegetation and forest. 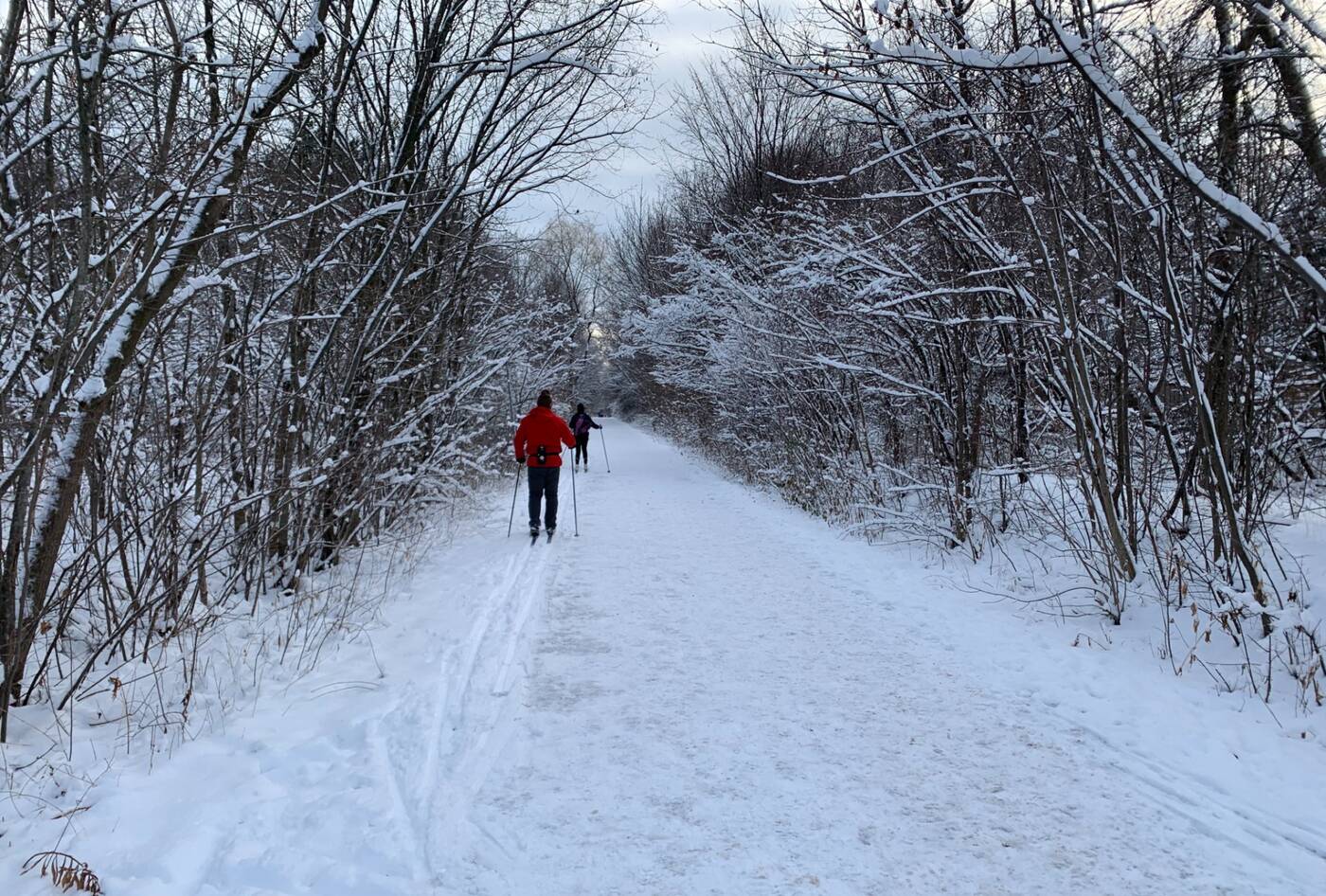 The straight and quiet trail makes for a good spot for cross-country skiing in the winter.

Where the trail intersects a street or a cross-trail, there are ornamental circles which bear the name of it. 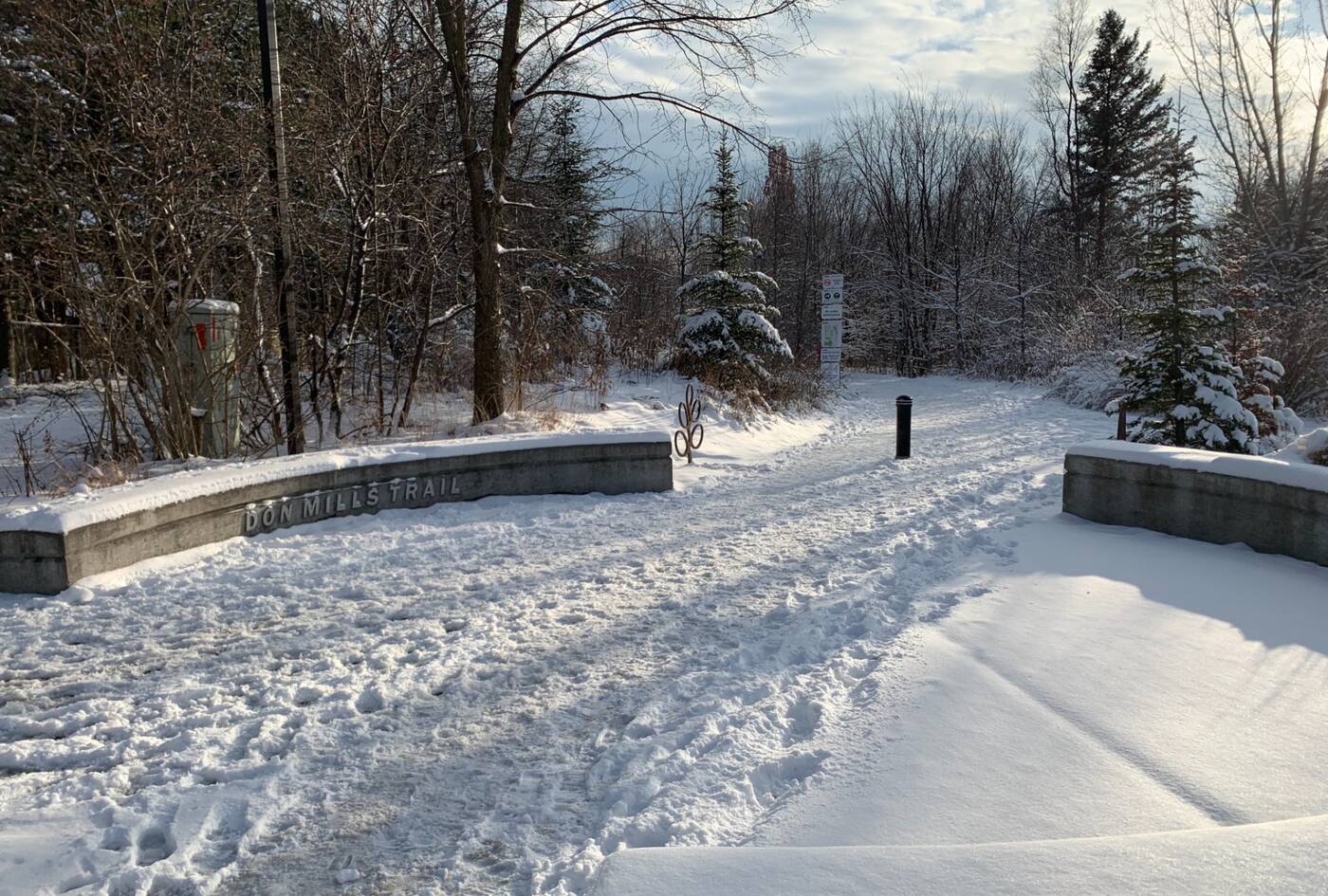 The ornamental circles at Lawrence Avenue bear the name of the trail.

Though you might miss it in the winter, some of these intersections even contain two embedded parallel rails as a reminder of the trail's long legacy. 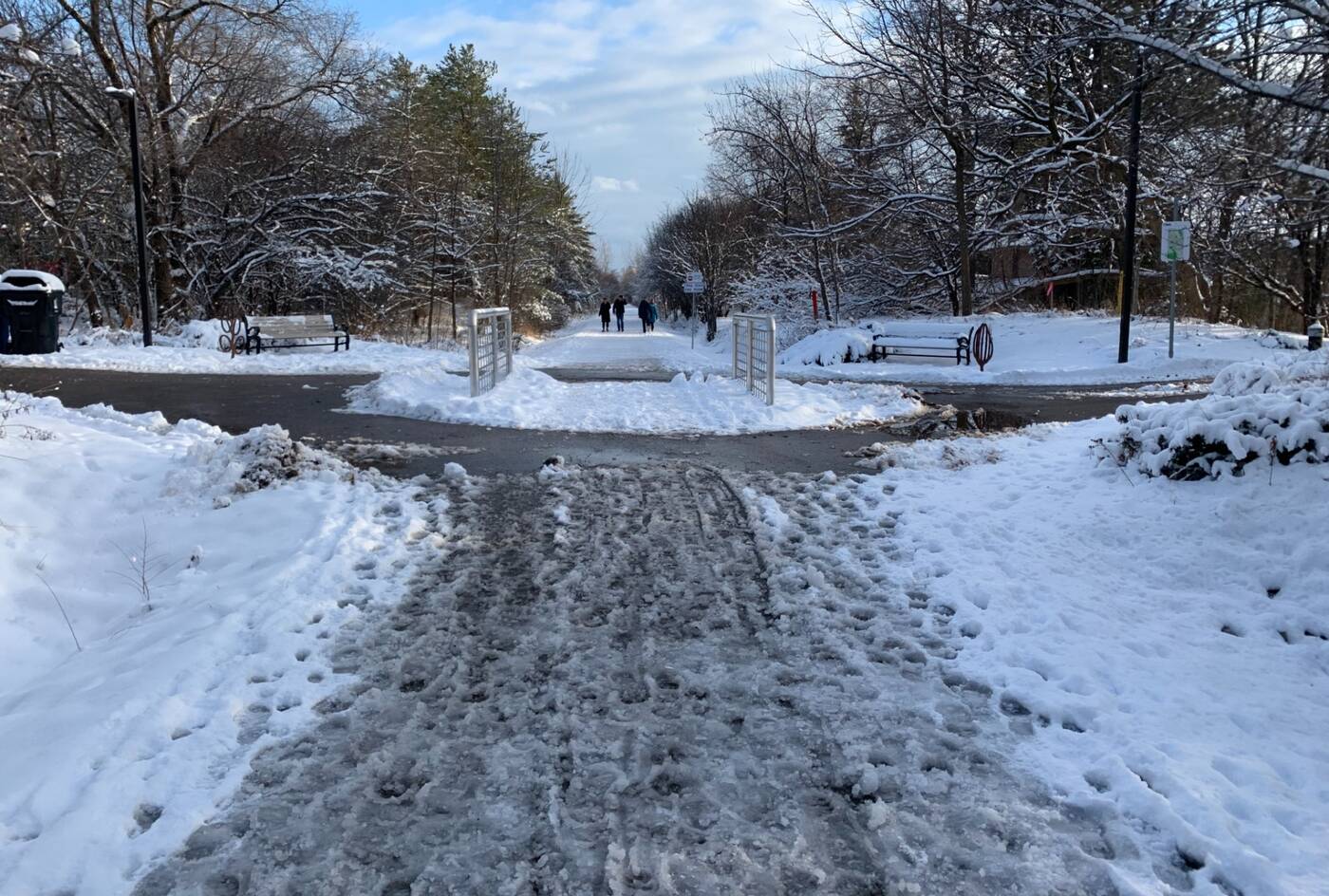 There are a number of benches located at the trail's intersections toward the south end.

The trail also passes over a hundred-year-old bridge at Bond Avenue. Local residents saved the deteriorating bridge from being demolished about 10 years ago due to its historic significance. 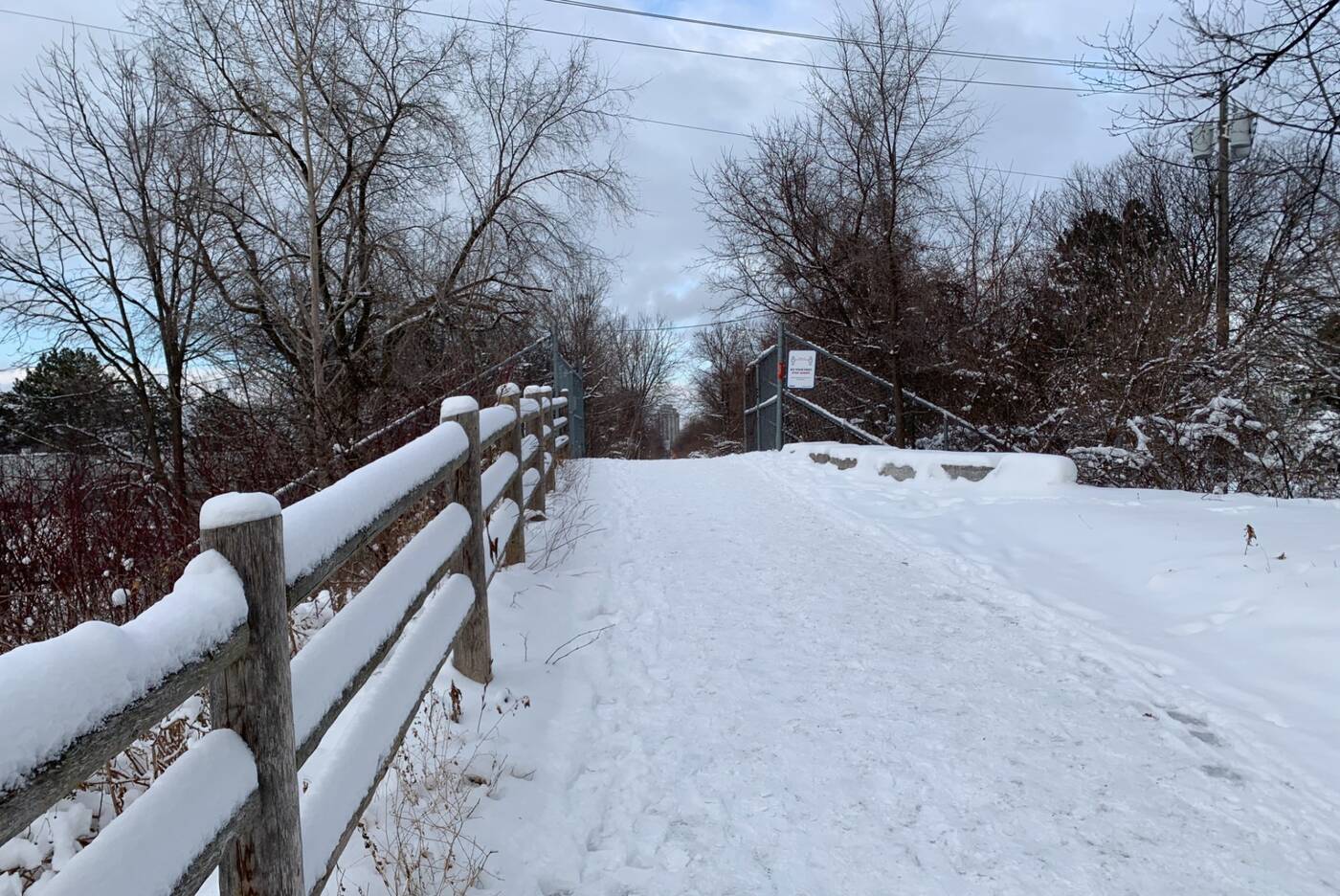 The bridge, which used to be a part of the Leaside Spur, was almost demolished in 2011.

The bridge took six years to construct and was made with concrete slabs and six-foot-thick steel beams in order to handle the weight of locomotives and heavily loaded railcars. 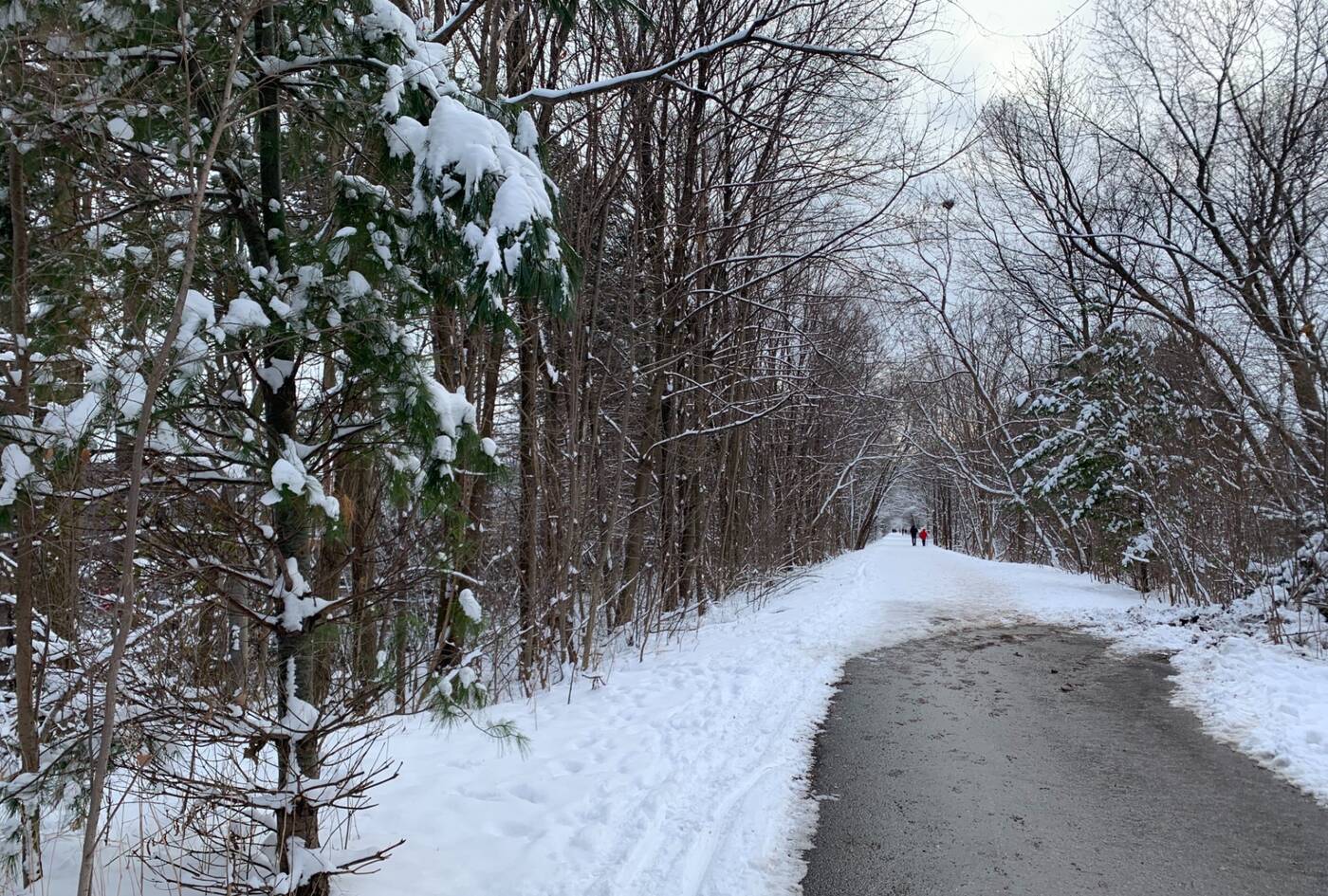 Keep in mind, there are no lights or winter maintenance on the trail.

Although there are plans to connect the trail east across the CP tracks to ET Seton Park, the linear pathway currently ends at a dead-end after about three or four kilometres. 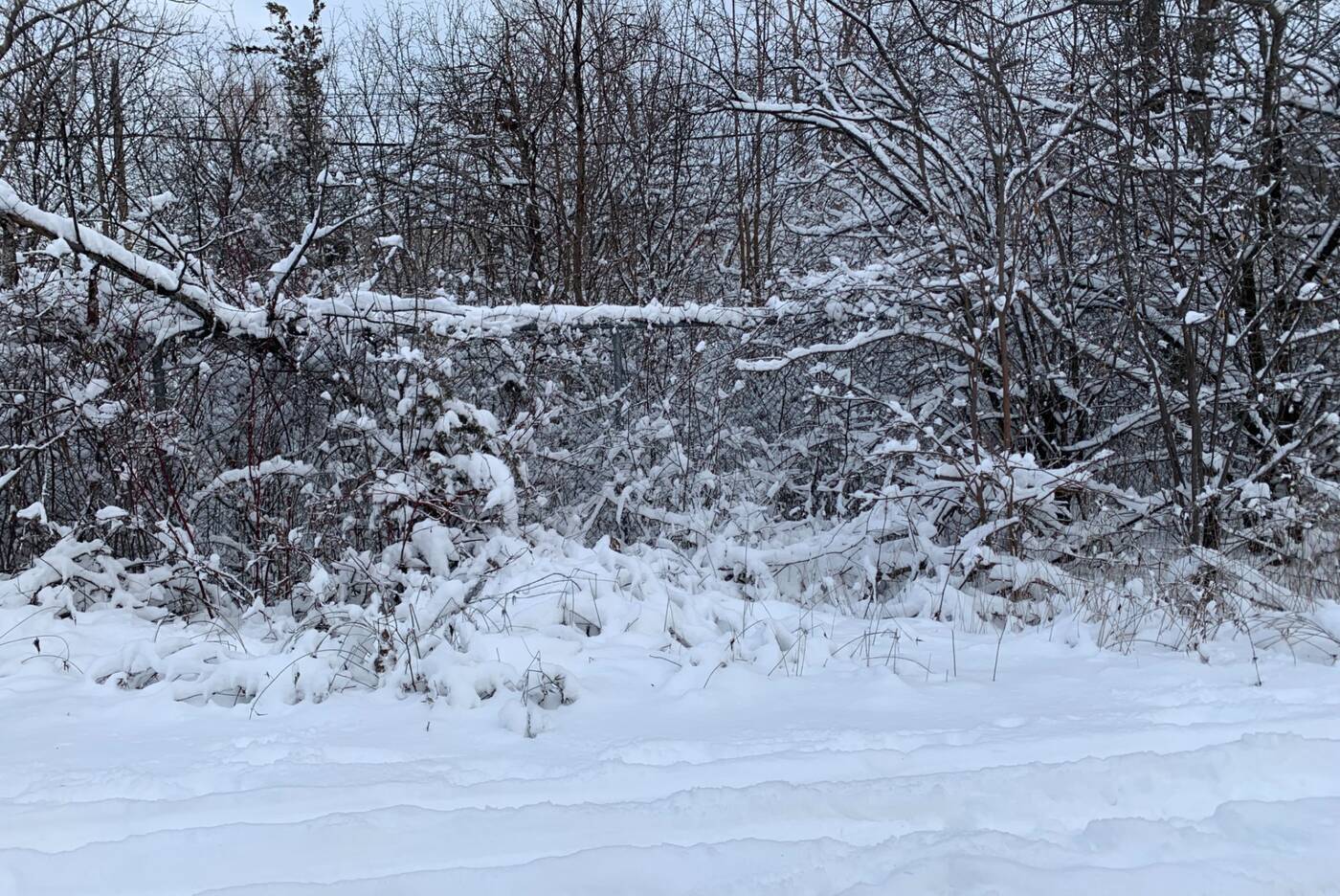 The trail ends at a fenced-off dead-end.

You can either exit through the unofficial path that leads to the intersection of Eglinton Avenue East and Leslie Street or head back in the direction you came. 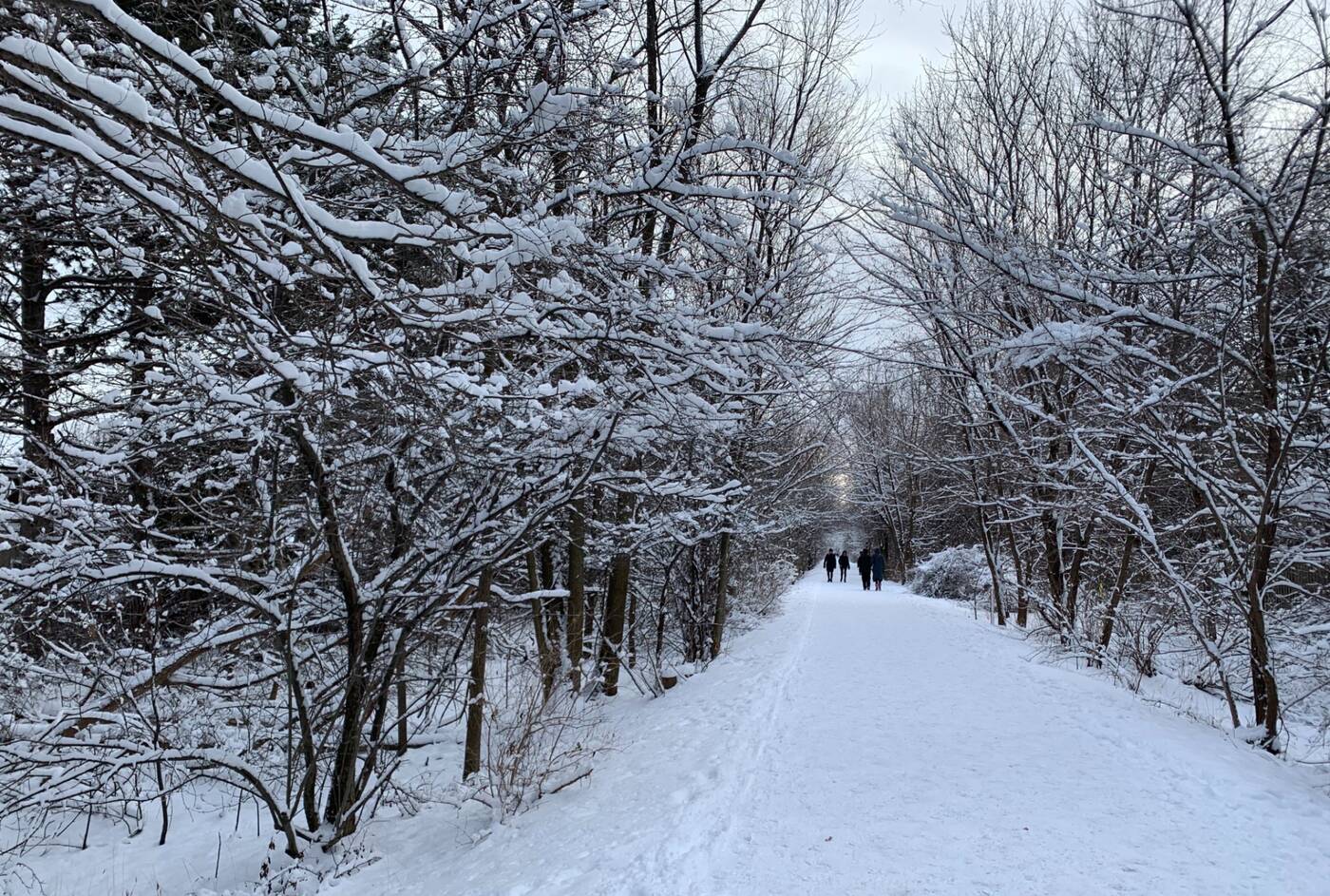