Remembrance Day was observed by all of the British Commonwealth nations after the close of WWI. The first official observance occurred on November 11 in 1919. The day was originally known as Armistice Day to commemorate the signing of the armistice that ended WWI on November 11 at 11 a.m. in 1918.

2.3 million Canadians have served during WWI, WWII, the Korean War, during peacekeeping missions, and in Afghanistan. Over 100,000 Canadians have died in war.

When WWI ended on November 11, 1918, Toronto was a different city. For starters, it was much smaller — it had only half a million people. However, everyone was touched, in one way or another, by the effects of the war.

When the armistice was signed, the news travelled by telegraph to Toronto. Celebrations erupted throughout the city.

Crowds of people lined downtown streets and parades were organized. Businesses and factories halted their workdays, allowing Toronto’s citizens to attend parades and gatherings. Children set off firecrackers and banged on tin cans. Sirens, church bells, and car horns erupted in a cacophony of joyful celebration. 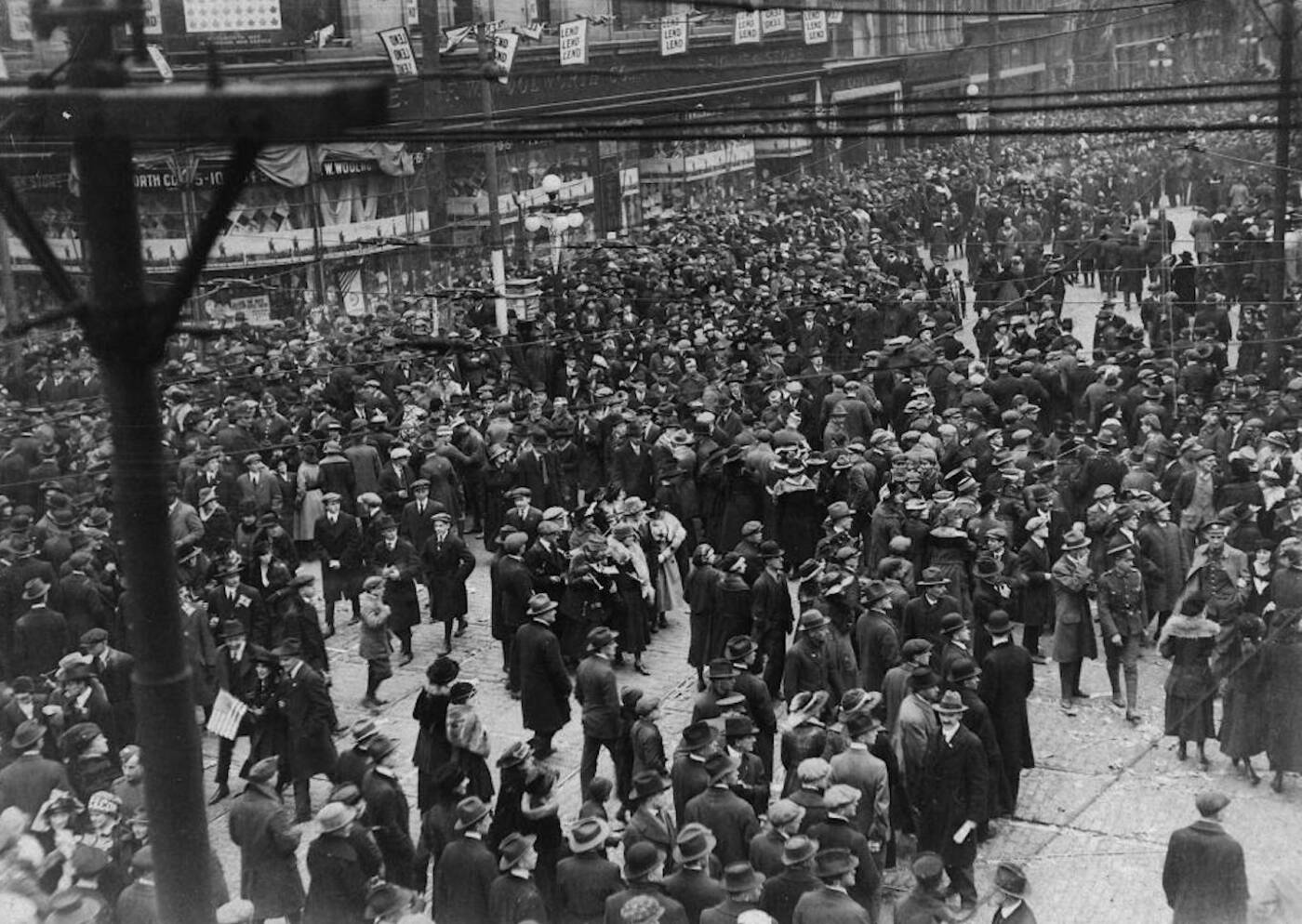 Nearly 200,000 people attended a Victory Loan parade in the middle of the city. 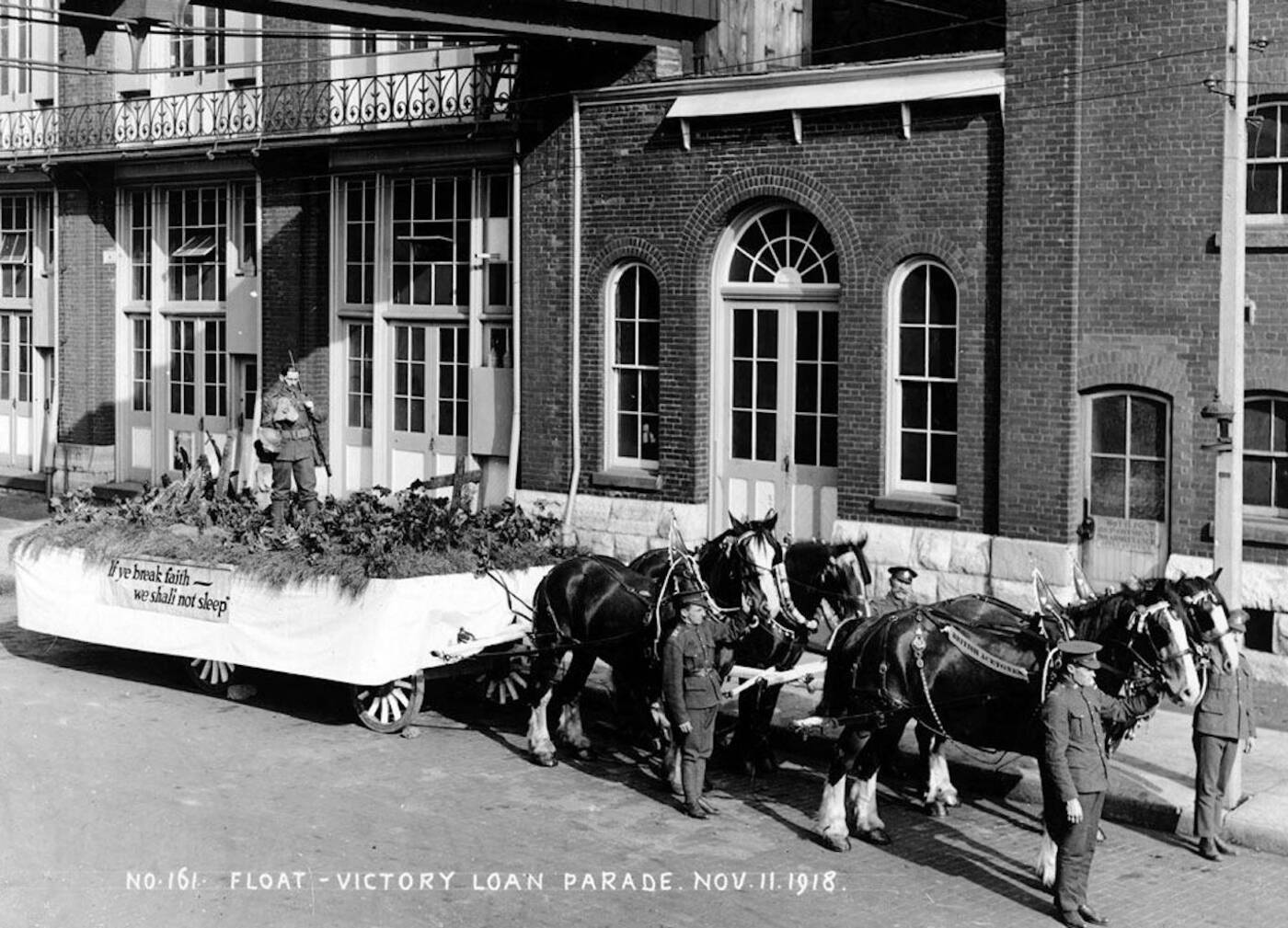 A float in the Victory Loan Parade representing Flanders Fields, with a quotation from the poem by John McCrae.

In a not-so-surprising parallel to today's pandemic, there were fears that mass celebrations would spark a second wave of the Spanish flu to hang like a pall over the city. 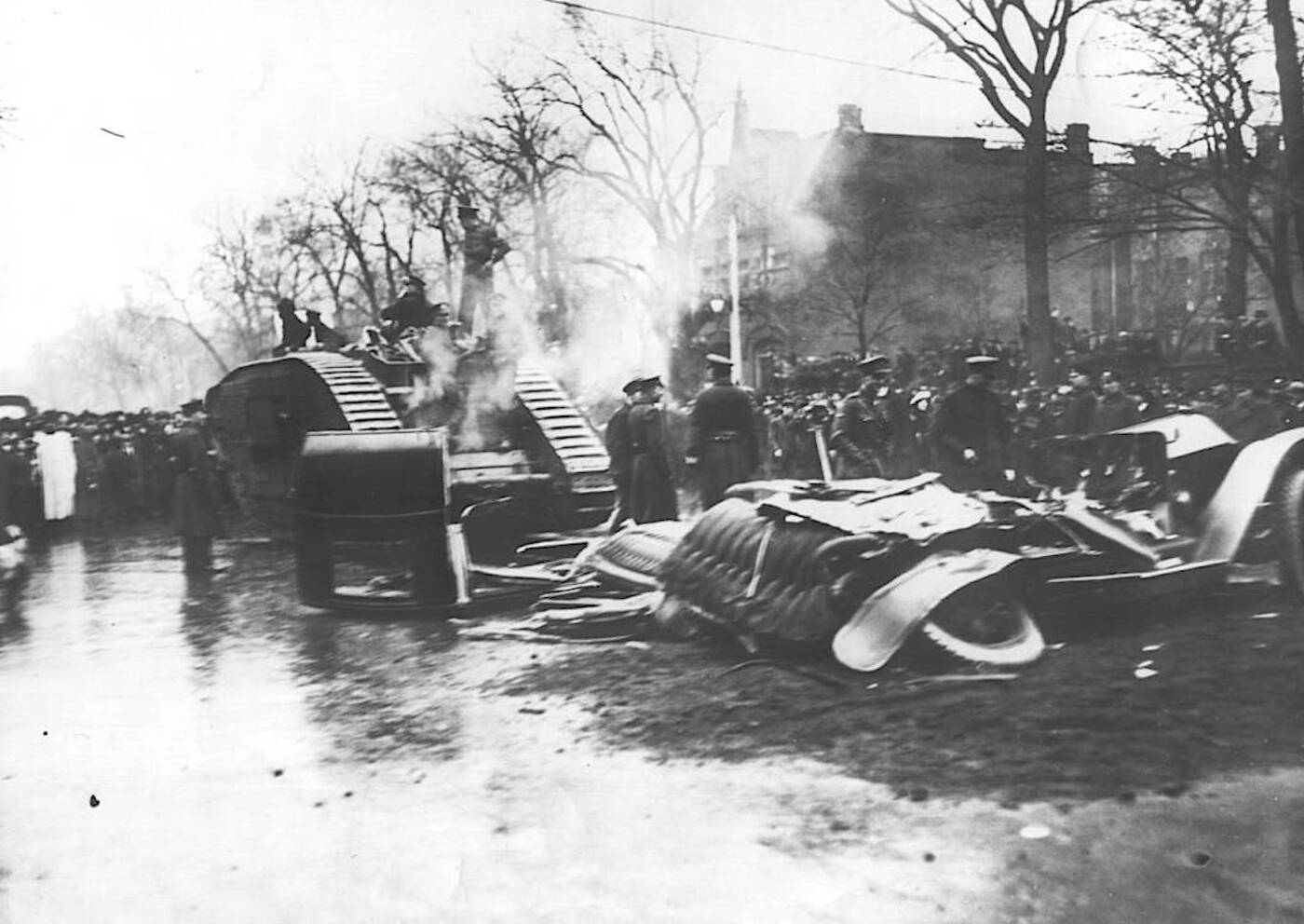 A tank crushes a car in an Armistice Day parade. Courtesy City of Toronto Archives.

A more sombre tone fell over the city during the evening, when a thanksgiving service was held in front of Queen’s Park, including remembrance of those who had fallen during the war.

Toronto’s first temporary, wooden cenotaph was built on November 8, 1920 outside of City Hall. The first official Remembrance Day Ceremony at the cenotaph was held on November 11, 1920, with 10,000 Torontonians in attendance.

The Salvation Army band played hymns, while the temporary cenotaph itself was guarded by dragoons and members of the Royal Canadian Regiment. Perhaps most poignantly, two grieving mothers laid wreaths at the cenotaph before the official ceremony began, as this was the only grave where they could mourn for their sons.

A permanent cenotaph was built in 1925. After an extensive competition with 50 entrants, Toronto hired architects and veterans William Ferguson and Thomas Pomphrey to design and complete the cenotaph’s construction. 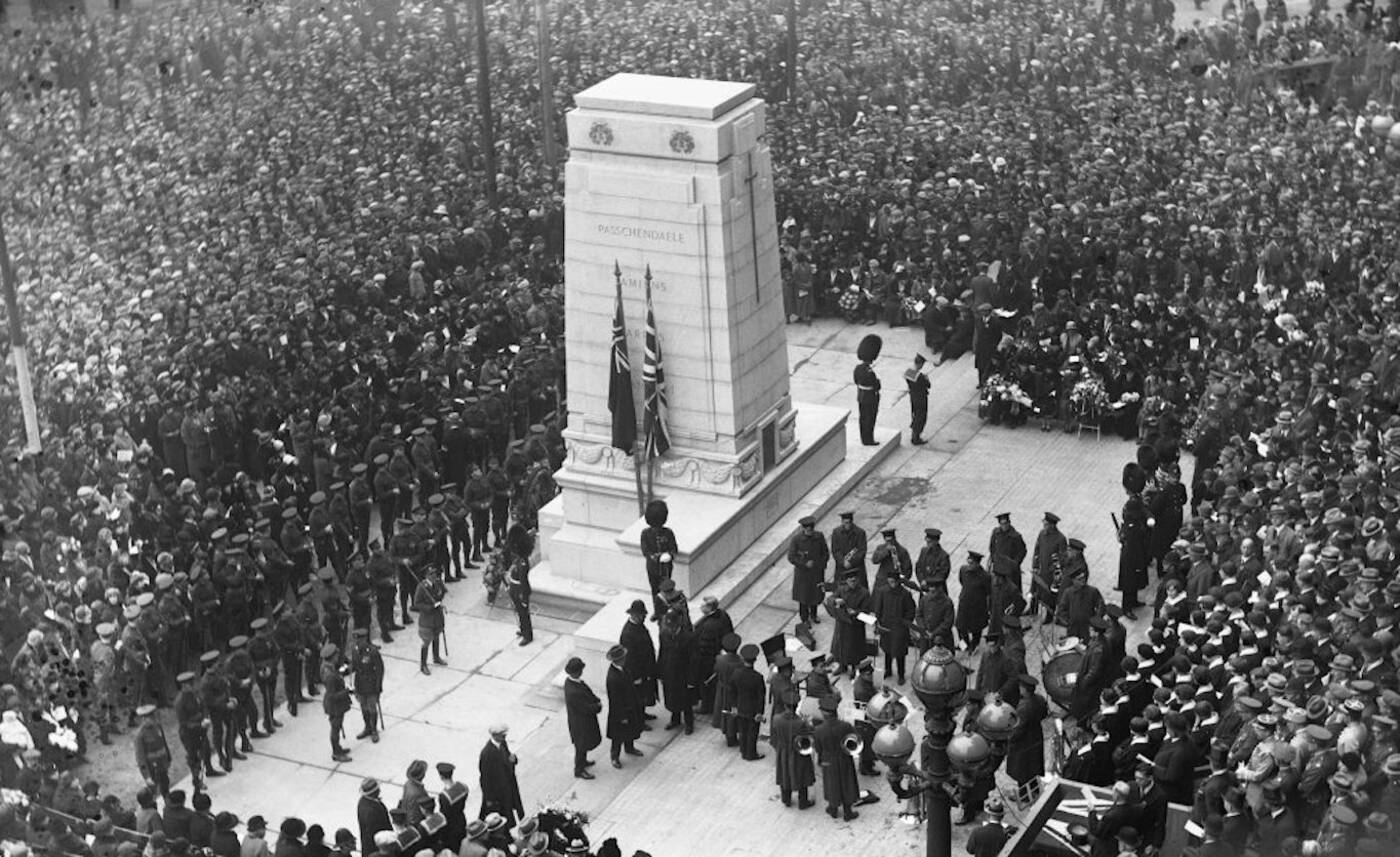 Crowds gather around the cenotaph on November 11, 1925. Courtesy City of Toronto Archives.

Field Marshal Earl Haig laid the cornerstone with a silver trowel that July. Built out of granite from the Canadian Shield, the cenotaph was finally unveiled on November 11, 1925.

The unveiling ceremony was marked by a large crowd, with Governor General Lord Byng, who had led Canadian soldiers to victory at Vimy Ridge, as the master of ceremonies. Celebrated Mohawk spiritual leader Chief Oskenoton later laid an arrow of peace at the foot of the memorial in December 1925 to commemorate fallen Indigenous soldiers. 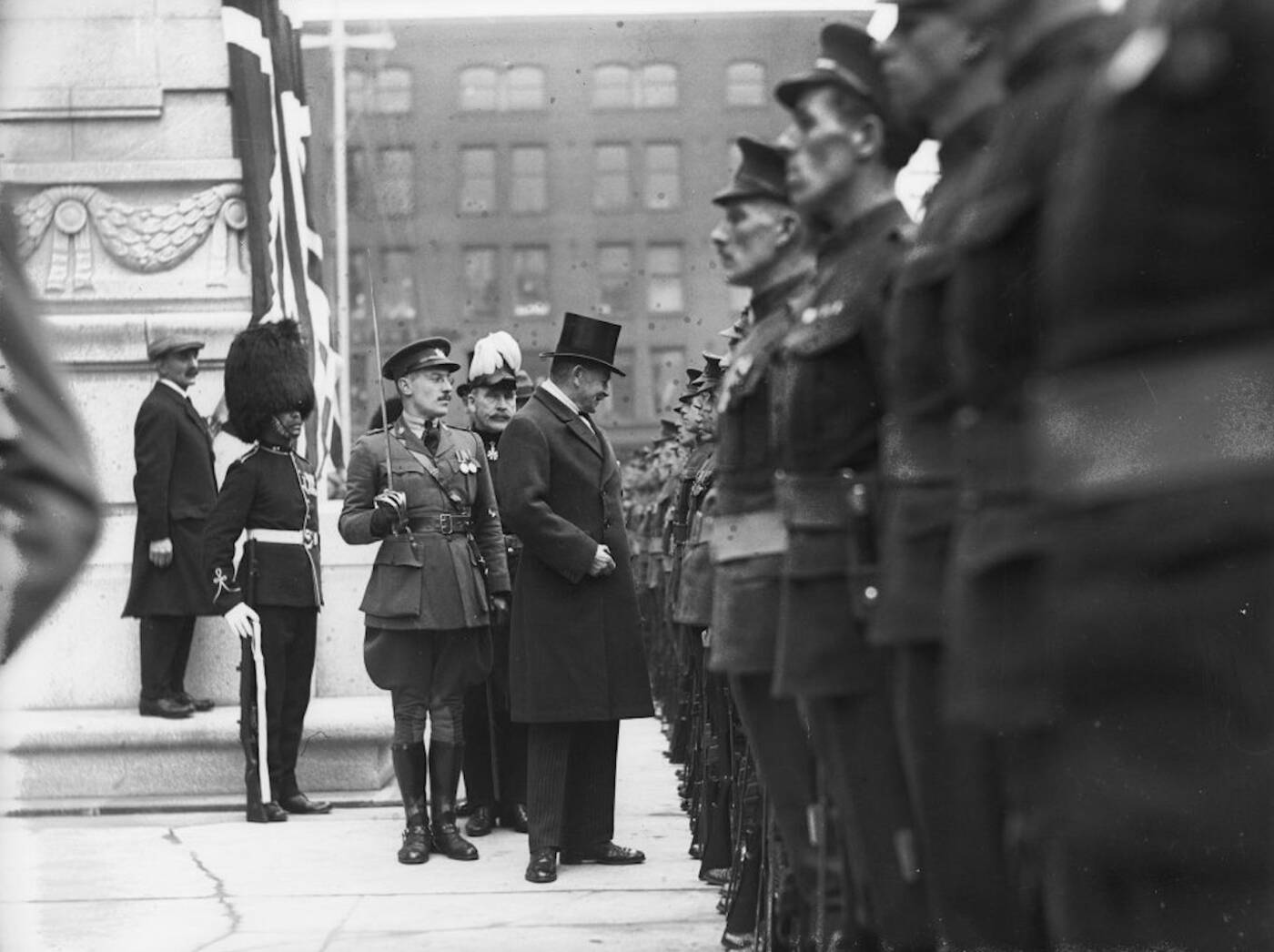 Lord Byng inspects the troops at the unveiling of the Toronto cenotaph. Courtesy City of Toronto Archives.

The cenotaph has been the site of official City Remembrance Day ceremonies in Toronto ever since. 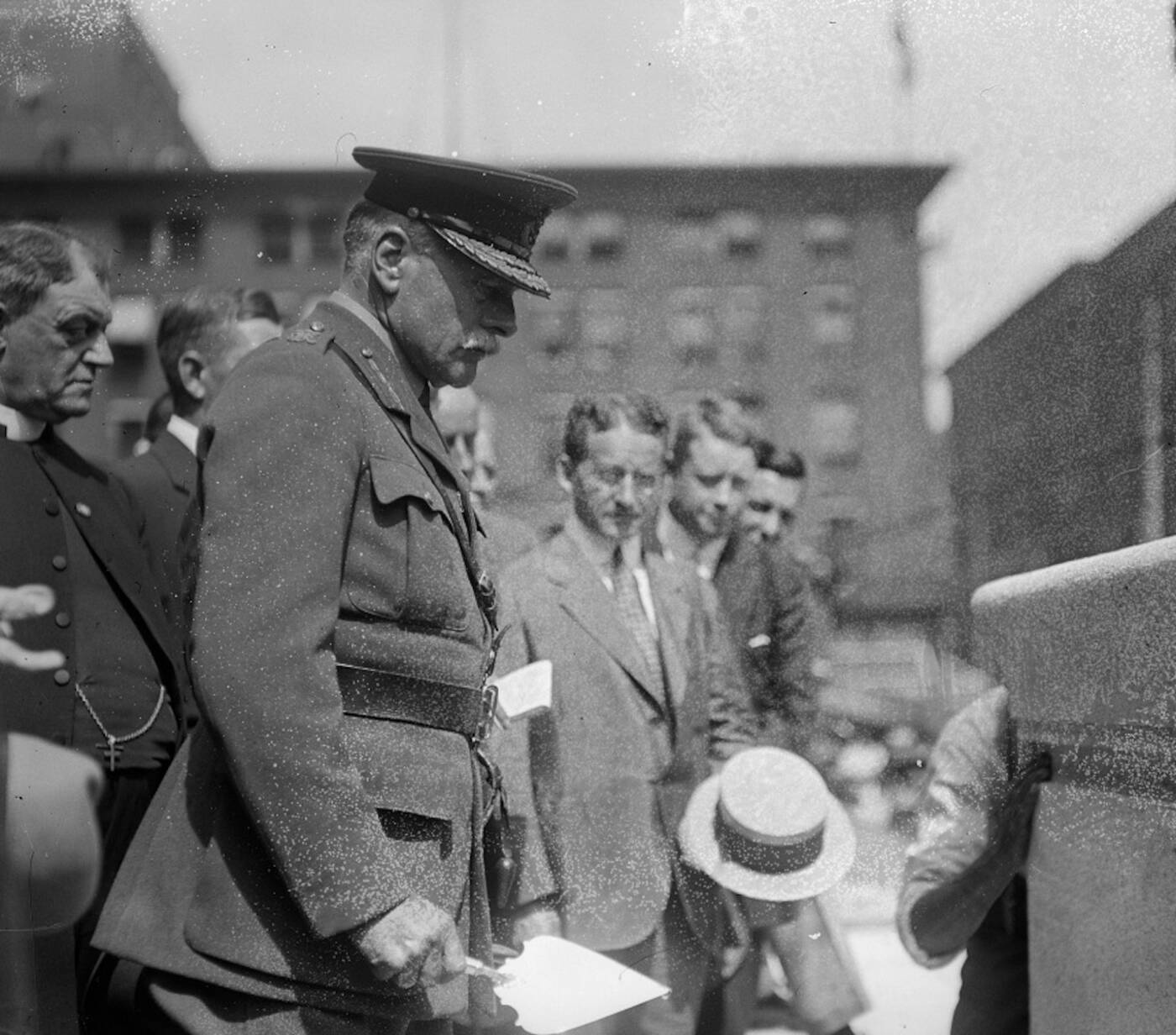 Earl Haig lays the cornerstone of the cenotaph in July 0f 1925, silver trowel in hand. Courtesy City of Toronto Archives.

Although public ceremonies will have a markedly different character this year, there are still many ways that one can commemorate Canada’s veterans. The City Hall Towers will be lit red on November 11, all TTC vehicles will stop at 11 a.m. for two minutes of silence, and virtual ceremonies will be available for streaming.

2020 will mark 75 years since the end of WWII. The stories of veterans are being shared on the City’s official webpage as a sobering reminder of the immense cost of war.

Veteran's Affairs Canada has also been running a virtual honour roll of fallen soldiers every day. A comprehensive website gives great detail into the important contributions made by Canadian soldiers.

Additionally, Soldiers' Tower at the University of Toronto  St. George campus will be running a virtual ceremony. You can find a program on their website.