A Toronto and American celebrity chef aren't quite on the same page when it comes to who should be the winner of the U.S. election.

As we all anxiously await the official and final results from Tuesday night, many have taken to social media to express their opinions on the U.S. presidential candidates, including Toronto's very own Mark McEwan and American celebrity chef David Chang.

Sharing a photo of himself next to democratic politican Joe Biden, Chang jokingly asked to be considered for a position in his kitchen cabinet. 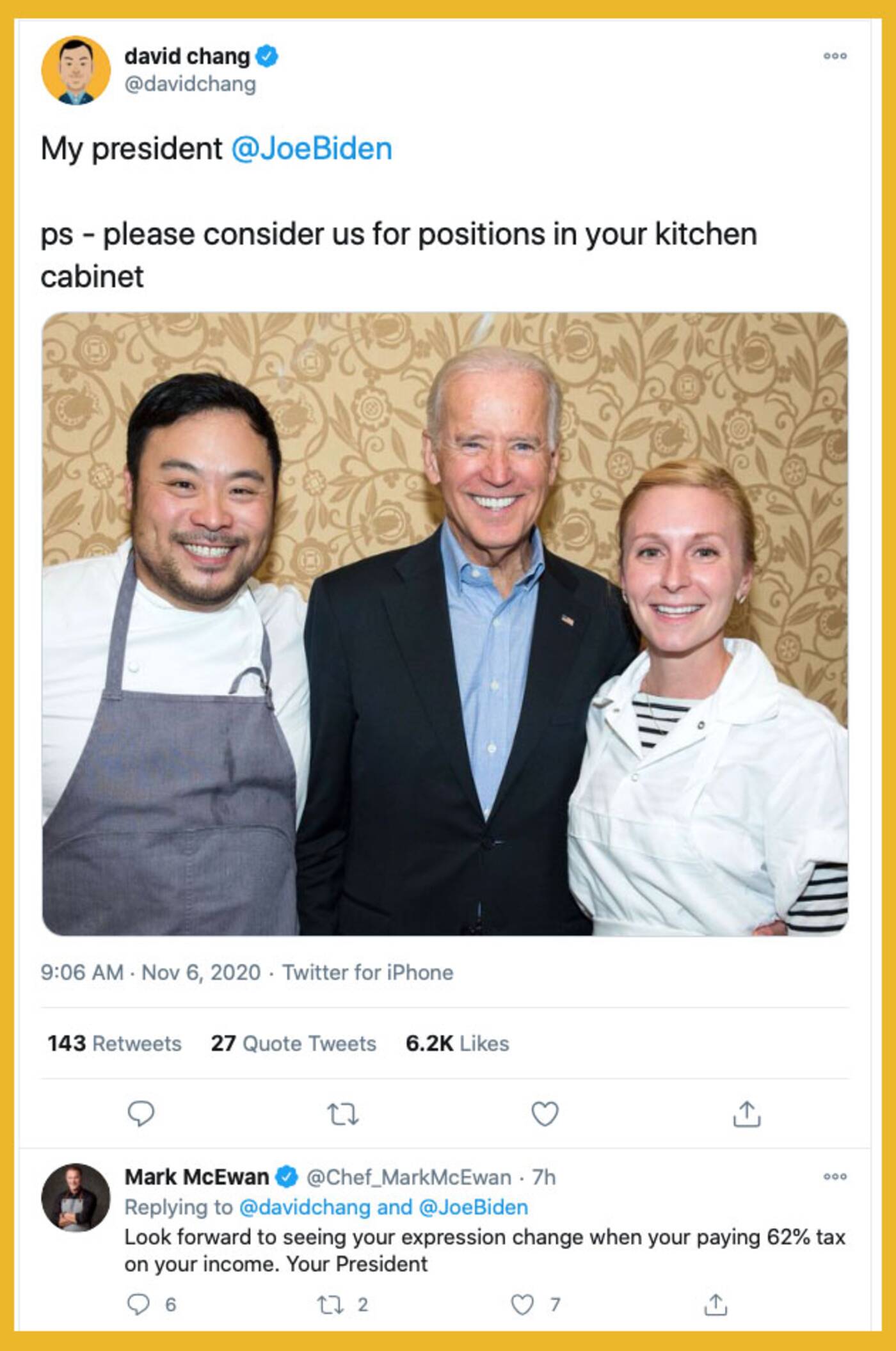 "My president @JoeBiden ps - please consider us for positions in your kitchen cabinet," Chang wrote on the social media platform.

This seemingly did not sit well with McEwan, who shared his own thoughts on Biden in a now-deleted tweet.

"Look forward to seeing your expression change when your paying 62% tax on your income. Your President," McEwan responded.

While some Twitter users agreed with McEwan, others weren't quite happy with his input.

You live in Canada dude shut the fuuuuuck up

Some even took the opportunity to comment on Biden's age.

You could literally serve him anything and he wouldn’t remember what he ordered in the first place.

However, there were many who thought Chang working in the White House was a great idea.

"Let me know if you need a sous chef!" one person tweeted.

I’ll do the dishes 😎

This is the second time McEwan has been in the news lately. Just last month, he publicly spoke up about his frustration with Premier Doug Ford's implementation of stringent rules on bars and restaurants.

Doug Ford needs to lead ontario back to work safely. Shut downs are a mistake. Do the right thing and lead the economy back!! BOLD LEADERSHIP...Be brave Doug Ford

Ford addressed the comments in a press conference, saying that while he respects the restauranteur, McEwan is not a medical professional.

"We see the numbers going up and we're concerned about that," Ford said.

"I respect what he's saying, but again, we have to focus on the health and safety of everyone across the province."

McEwan was the head judge on Top Chef Canada and is known for a slew of restuarants in Toronto, including a gourmet food supermarket called McEwan.

Chang, on the other hand, is the founder of the Momofuko restuarant group which also has locations in the city.