East York’s character has changed over the years, but is known by its residents for retaining something of its small-town charm.

The area had been part of York township all the way up to January 1st, 1924, when a group of East Yorkers decided to split apart from the more centralized township, creating the borough of East York. At this point, the borough had a population of just under 20,000 residents, which grew to over 30,000 during the 1930s and 1940s.

East York was a neighbourhood largely populated by the working class. At that time, they would have been able to afford the small homes there, often complete with both back and front gardens. 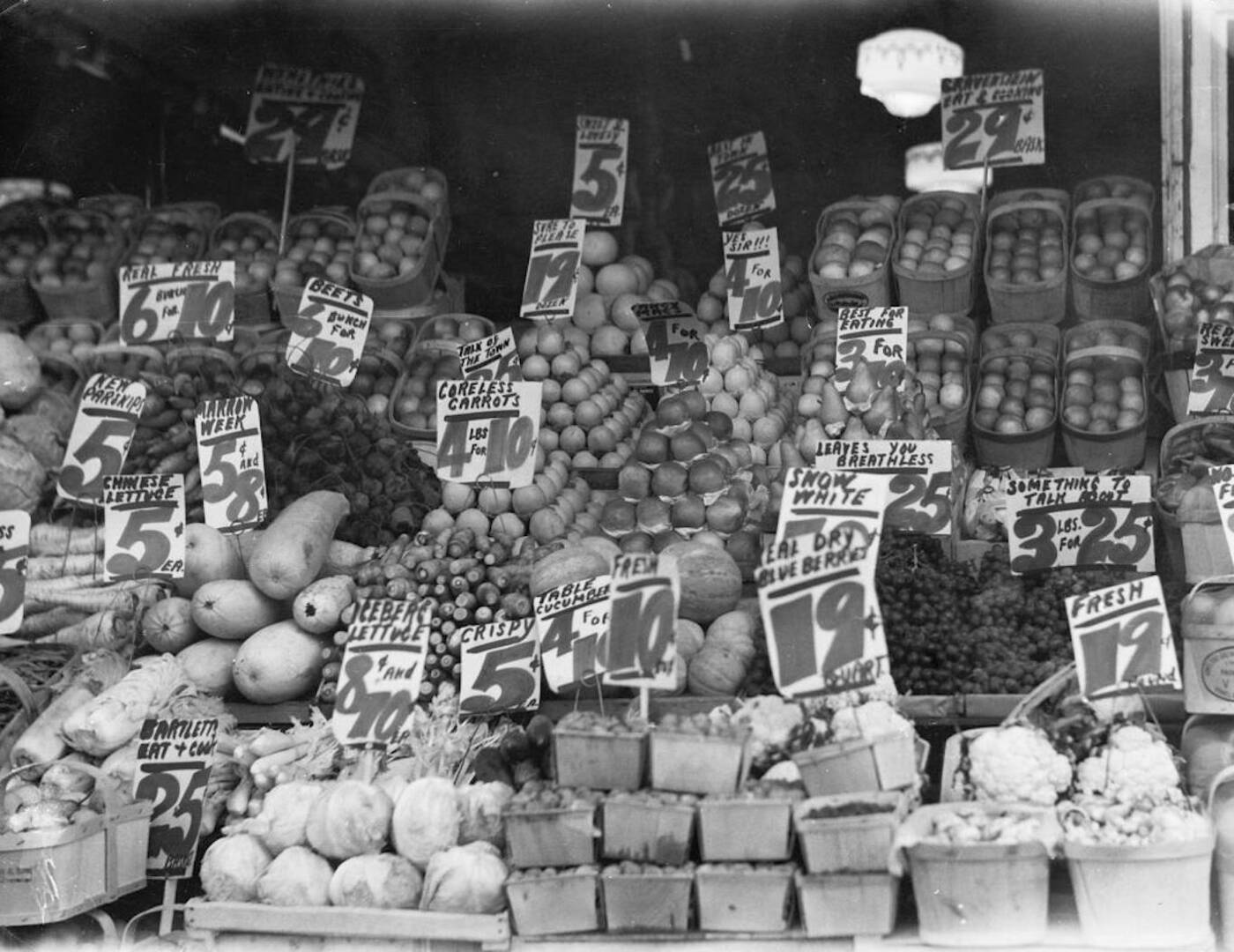 A produce stand on Coxwell Avenue in the 1940s, very much like the ones lining the Danforth today. Courtesy City of Toronto Archives.

In fact, in the 1930s and 1940s the likes of Cosburn, Donlands, and Mortimer Avenues would have been dotted with backyard and market gardens, where residents could supplement their wages by selling produce to their neighbours.

A panoramic shot near Cosburn Avenue and Linsmore Crescent in 1943, taken from the roof of the Cosburn United Church. Courtesy Toronto Public Library.

Later on, when war rationing was enacted during WWII, these market gardens would turn into victory gardens and residents were encouraged to grow their own produce and be more self-reliant as the war pressed on. Cosburn Avenue was named after a local market gardener. 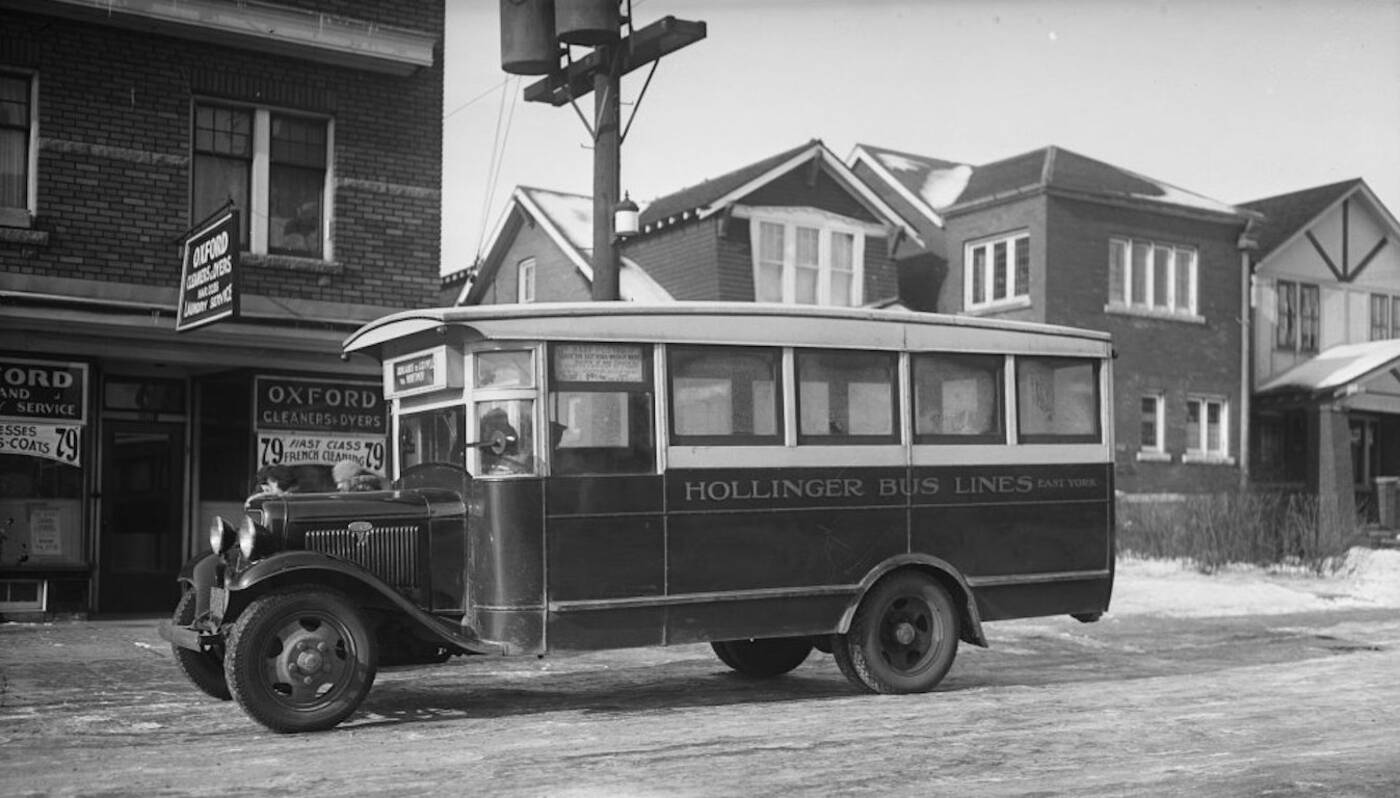 A Hollinger bus in 1936. Courtesy City of Toronto Archives.

Hollinger buses would have been a frequent site on East York roadways. The company, founded by Irish immigrant John Hollinger in 1921, served the community until it was absorbed by the TTC.

At the outset, there was one route along Woodbine Avenue from Danforth Avenue to Plains Road. Hollinger himself was often a driver on the route and would deliver eggs and other groceries to families on quiet days.

Hollinger added a number of routes along Coxwell Avenue, Broadview Avenue, O’Connor Drive, and Donlands Avenue. The Hollinger bus line, when it was finally absorbed by the TTC, operated eight routes across East York, had a fleet of 56 buses, and employed 100 people.

East York during the Great Depression

East York suffered when the Great Depression hit in 1929, with 45% of its population on relief by 1935. The township was in tax arrears to the sum of $1.1 million, and the Township Council could not meet its financial obligations. Costs needed to be cut to ensure the Township’s survival.

Unemployed families were encouraged to develop farmland up north in Cochrane, Ontario, between Sudbury and Moose Factory. While some families opted to eke out a difficult living in northern Ontario, they quickly realized that it was a back-breaking task to farm on the Canadian Shield. Many of these families hastily returned to East York. 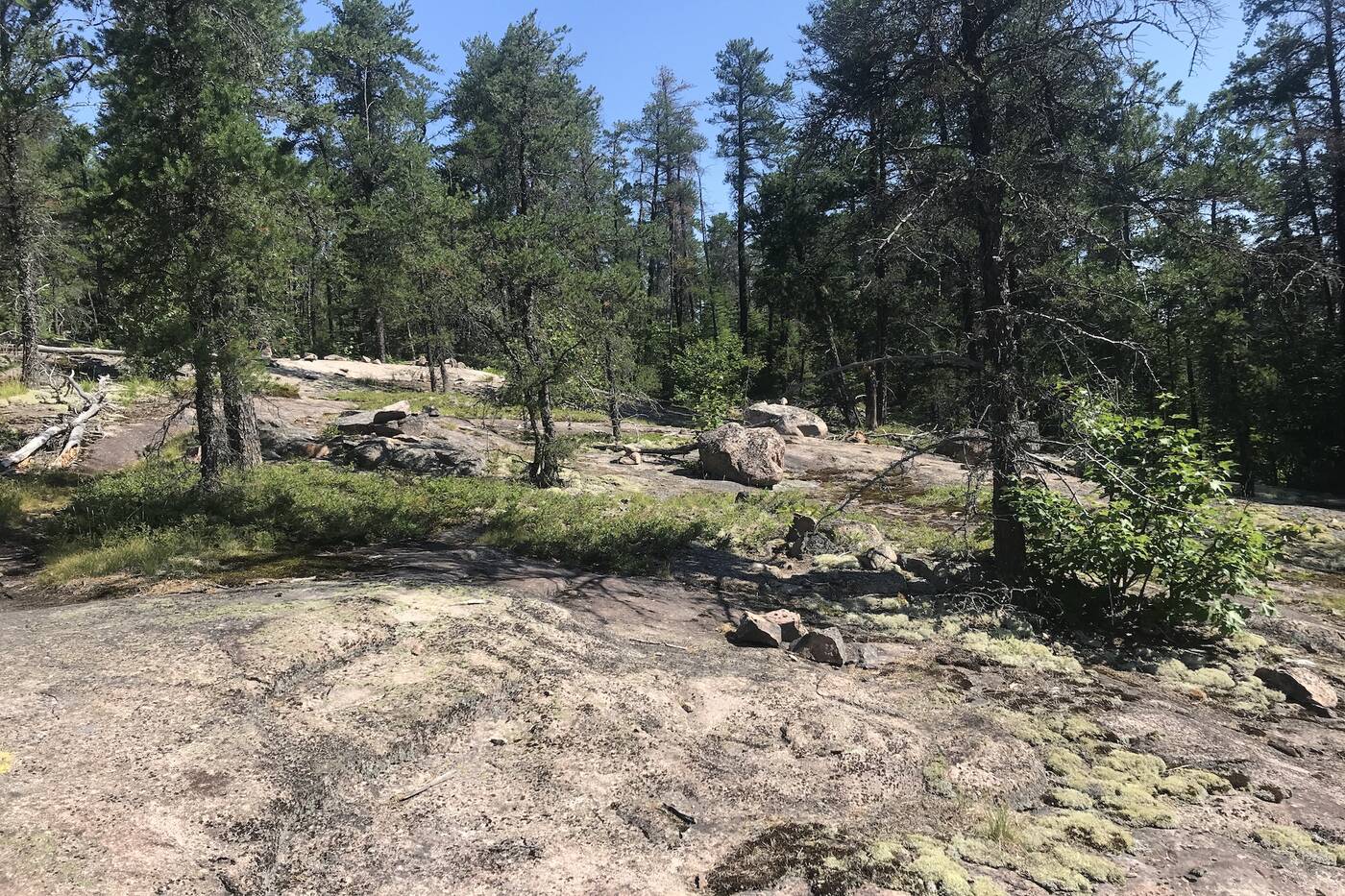 A portion of the Canadian Shield. A great place to visit for nature enthusiasts, but not an ideal spot for farmland. Photo by Alice McMurtry.

During the Great Depression many locals came together in 1931 to form the East York Workers Association. By 1934 the Association had over 1,600 members and they championed workers’ rights during an unstable economic era.

The Association often held socials and card nights to keep up morale. They also blocked local bailiffs from evicting unemployed residents from their home. As a bailiff came to remove a family’s furniture during an eviction, members of the Association would take the furniture back into the house until the bailiff finally relented. 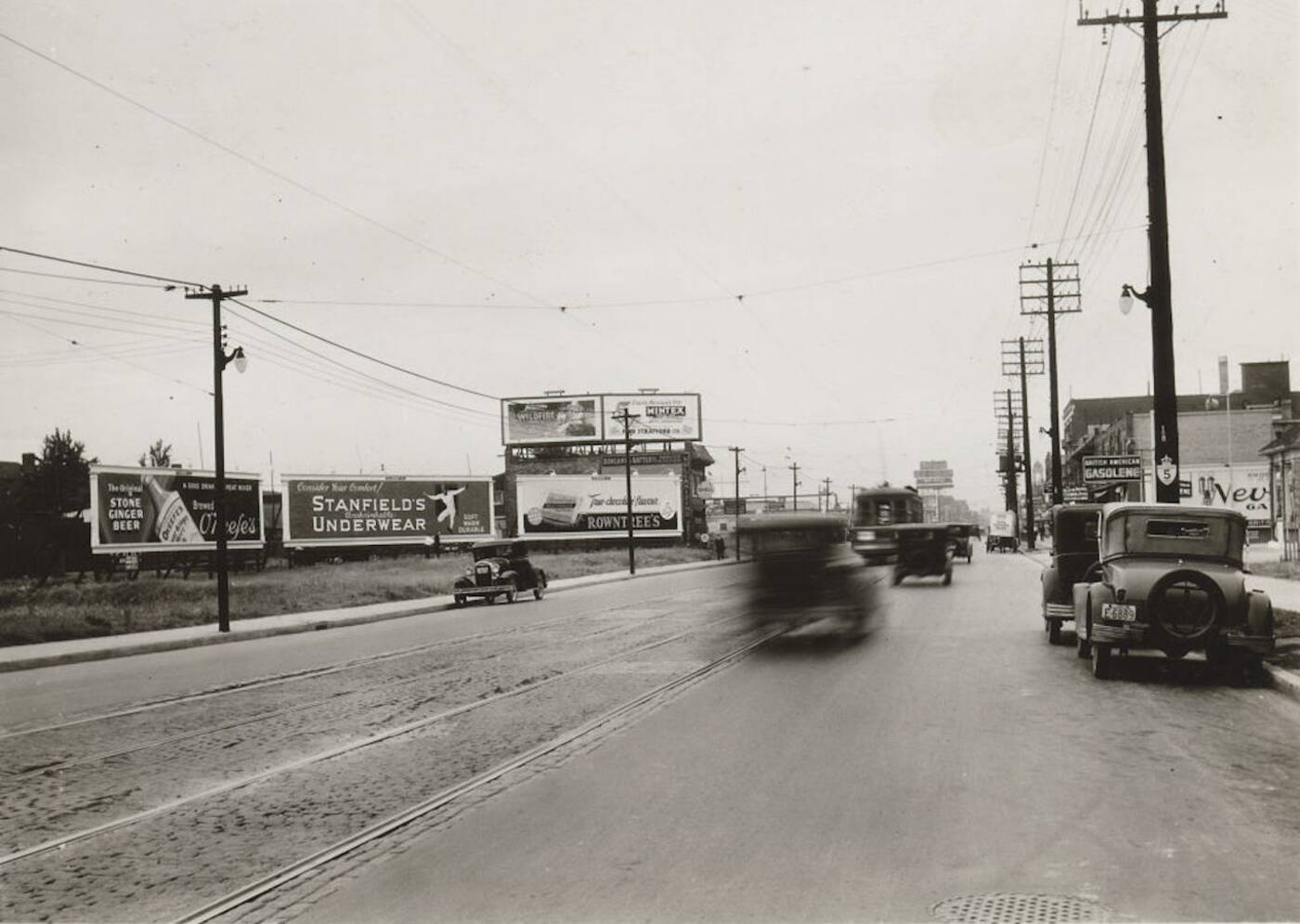 A view of Donlands and Danforth Avenues in the 1930s. Courtesy City of Toronto Archives.

Many homeless men took up residence in the Don Valley, referring to themselves as the Cave and Shack Dwellers. They built a shanty town close to Todmorden Mills and would sleep in the kilns at the Brickworks during the harsh winter months. 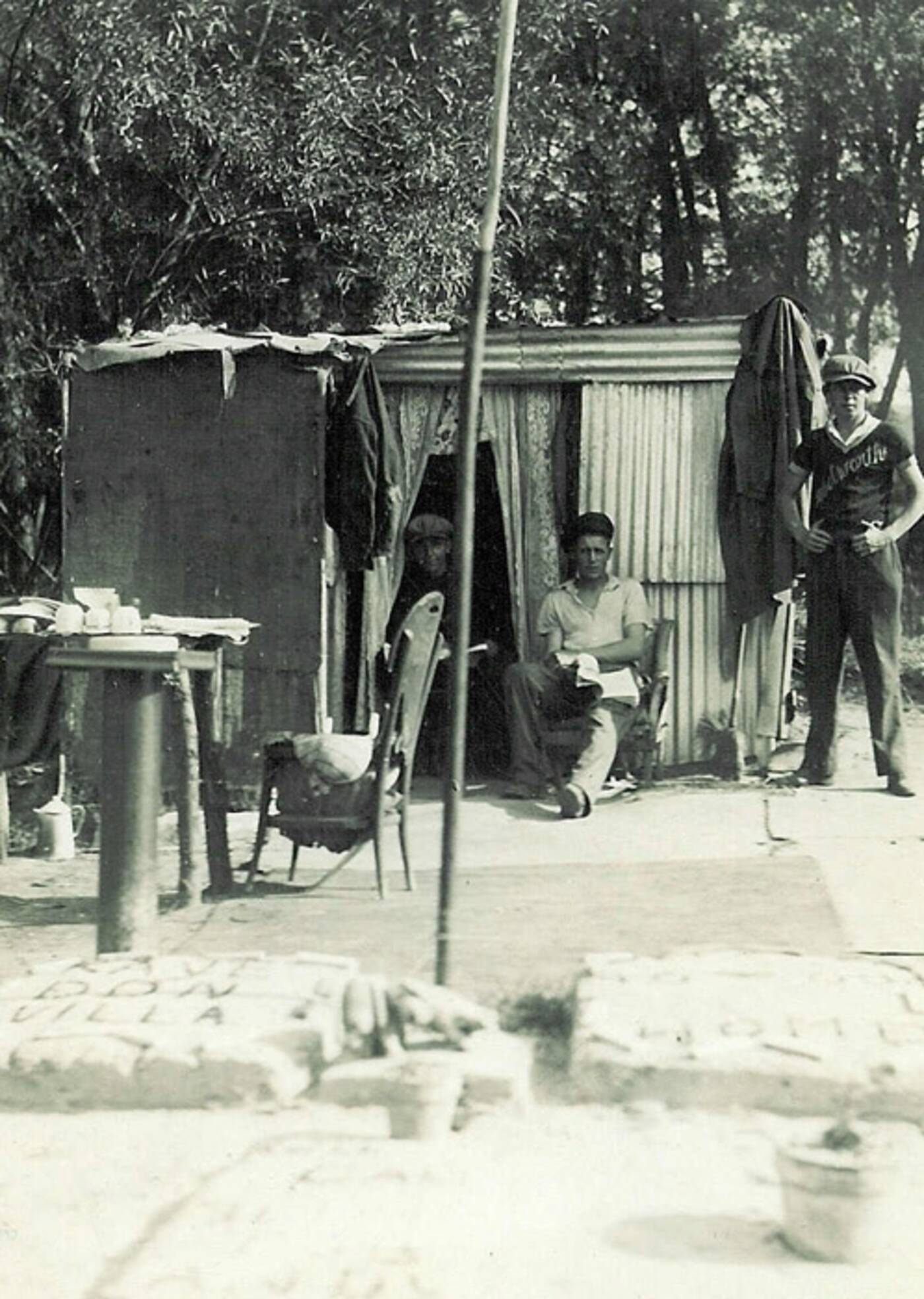 Unemployed men made the Don Valley their home during the Dirty Thirties. Courtesy Wikimedia Commons.

Entertainment and amusement in the 1930s and 1940s

What did people do before the days of the Internet and TV? Families went to the movie theatre, of course.

The history of movie theatres is well documented in Toronto, and East York was home to a number of them. The Cameo Theatre stood at 939 Pape Avenue, just south of Cosburn at Floyd Avenue.

It was constructed back in 1934 and remained a family business (owned by the Strashin family), later being sold off to major grocery chain Loblaws in 1957. The site is now occupied by a TD branch.

Going out to see a movie was considered a luxury during the lean period of the Great Depression. To counteract plummeting ticket sales, many movie theatres in the city offered something called Dish Night.

At Dish Night, purchasing a ticket entitled a patron to a plate, coffee cup, casserole, or other item of dinnerware. These could be collected over time and households were able to amass dinnerware quite cheaply. 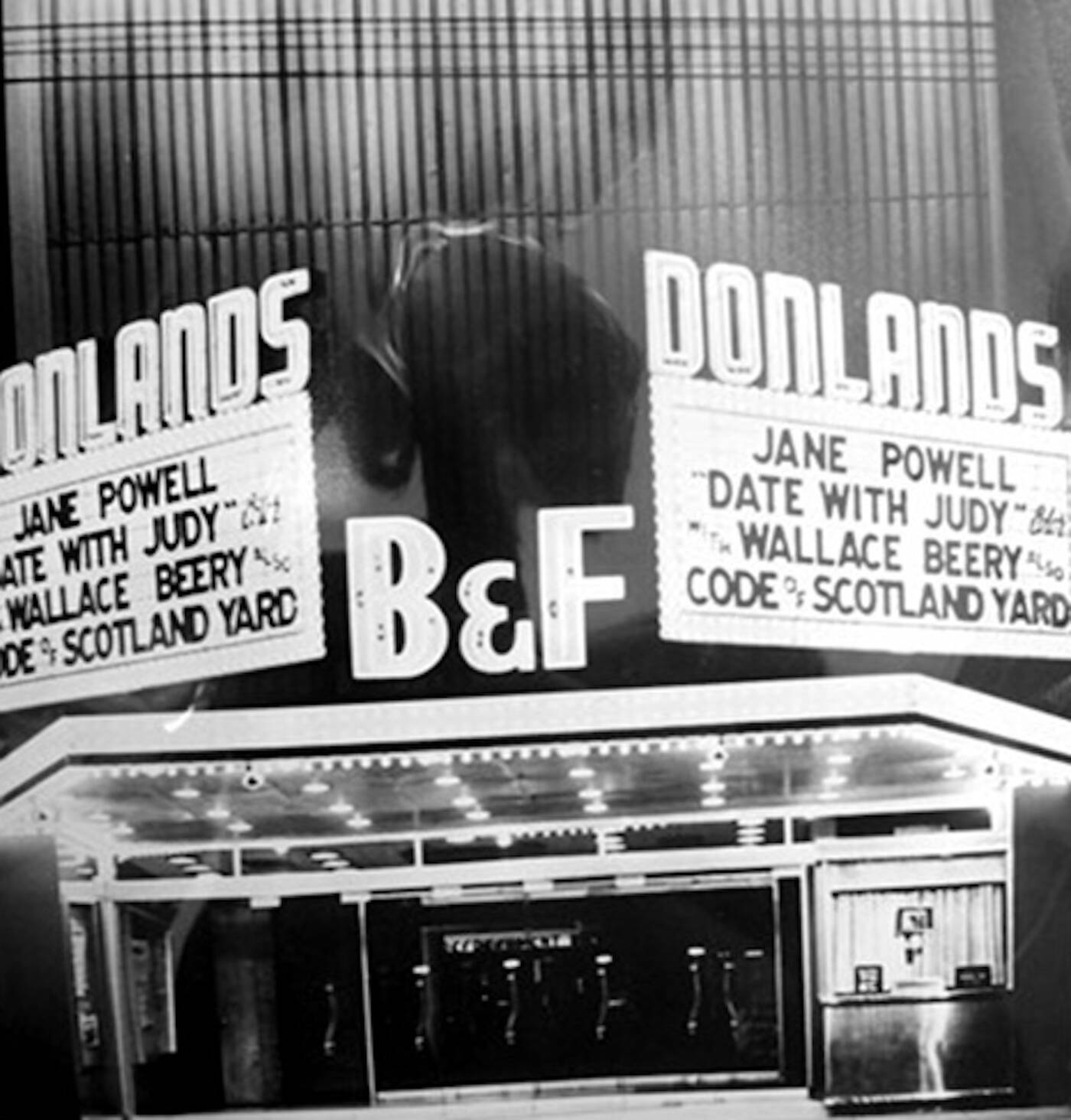 The exterior of the Donlands Theatre. Courtesy Cinema Treasures.

Another theatre in the neighbourhood reflects the post-war economic boom. The Donlands Theatre was opened in 1948 as part of the Bloom and Fine theatre chain. With 850 seats and one screen, it was a central entertainment hub for East York.

The former theatre is now being used as a sound stage by Pie in the Sky Studios. Luckily, they have preserved much of the interior character of the theatre. 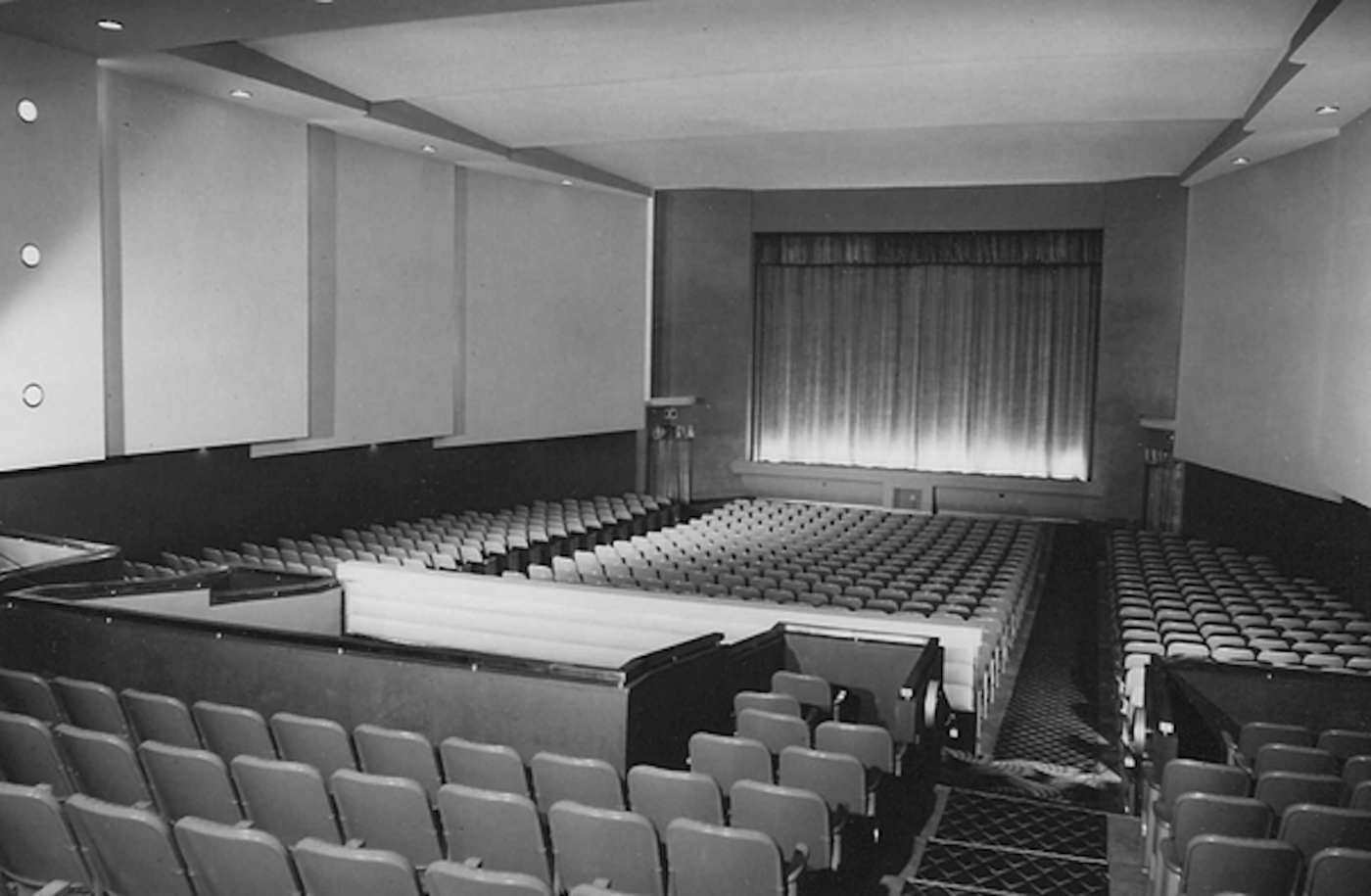 The interior of the Donlands Theatre. Courtesy Cinema Treasures.

The Pape Library on the south east corner of Pape and Danforth was opened in November of 1929, designed by the architectural firm George, Moorhouse, and King.

The Pape Library would have been one of the only libraries to serve the area until S. Walter Stewart Library was built in 1950. A library card cost about 5 cents. 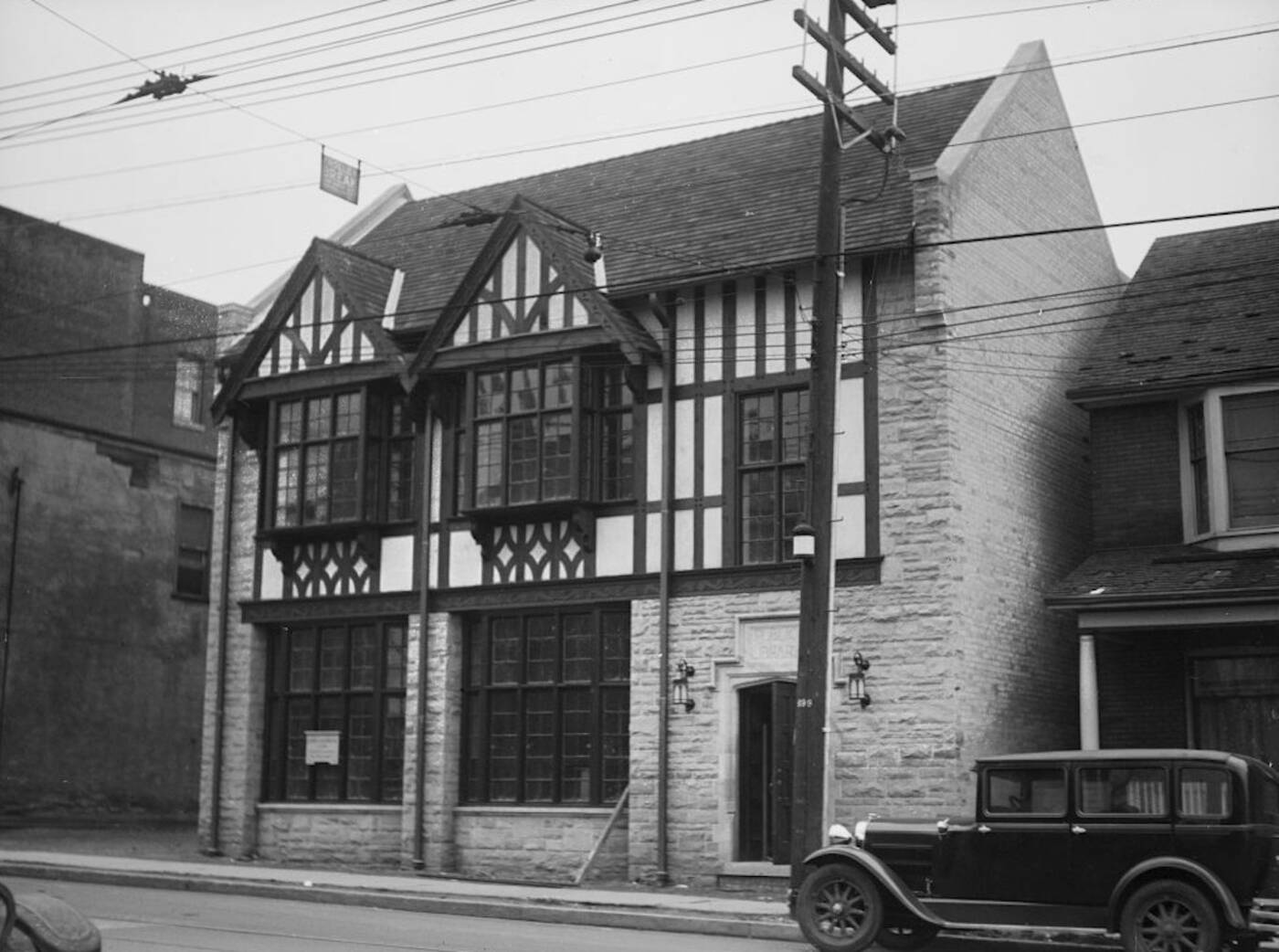 The Pape and Danforth public library after its construction in 1929. Courtesy of City of Toronto.

Even as the rest of Toronto expanded in the post-war years, East York retained its sense of place and unique character. Local festivals, associations, and shops keep it a tightly-knit community.

Though you boast about London,

To compare with East York

Its people are friendly,

If you can't get along

Then the trouble is you

Toronto Archives. With files and resources gleaned from the East York Historical Society.