Cases of COVID-19 have been steadily rising in Toronto for months now, and today the city's top doctor painted a bleak picture of what's to come if we don't take swift and substantial action.

She clarified that the outbreak is considered to be dying out when this number is below 1, it's under control when it's at 1, and it's considered out of control when the R level surpasses 1. This means the virus is currently spreading quickly and will continue to do so unless actions are taken to slow it down.

Based on the current R level and other data from Toronto Public Health, Dr. de Villa stated bluntly that the city is on track to surpass the peak we saw during the first wave back in April within the coming weeks without intervention, and it will only get worse from there. 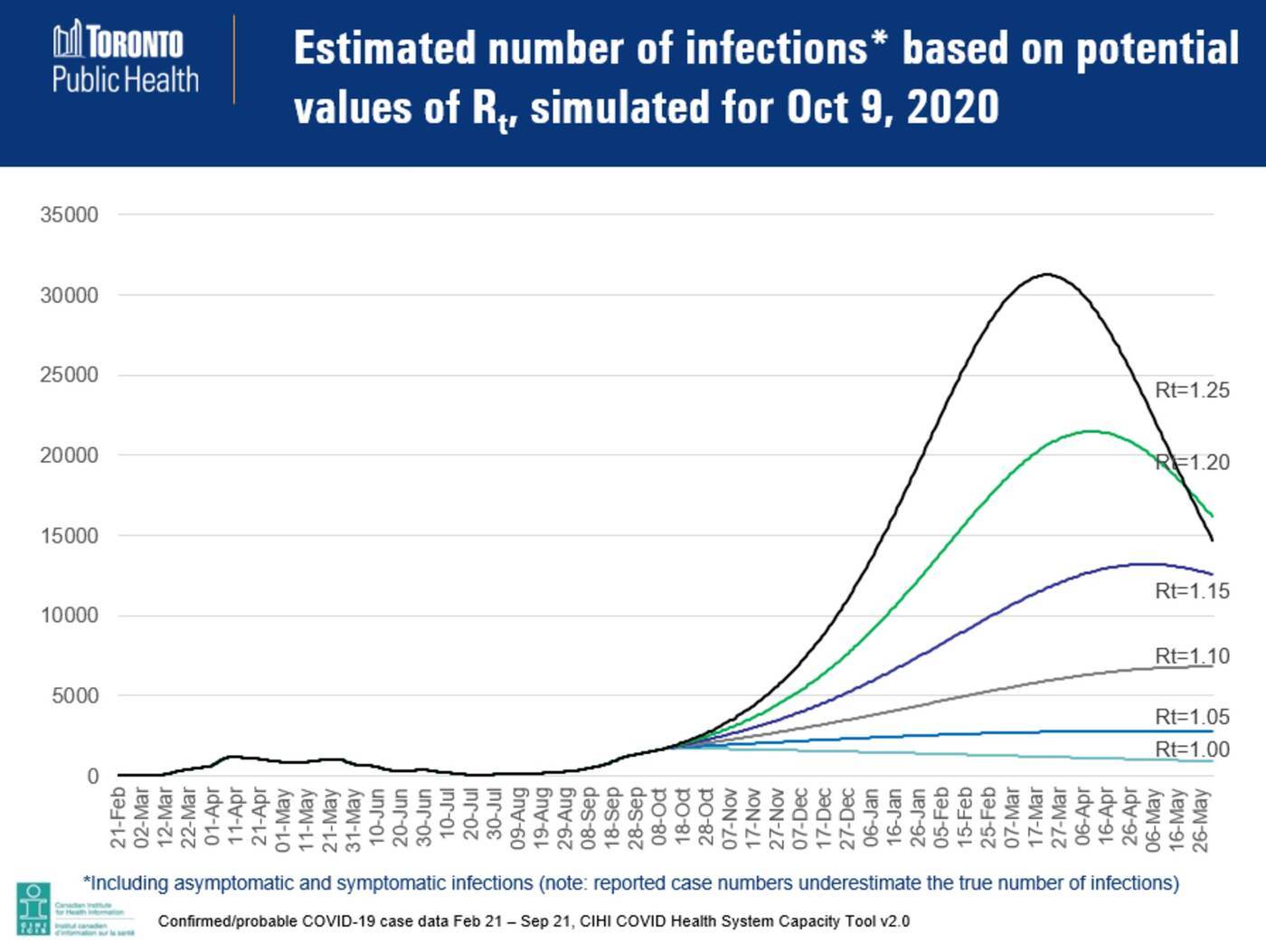 Assuming we remain on the current track, the second wave is expected to continue to worsen and peak in the spring, sometime between early March and May of 2021.

Dr. de Villa also shared modelling drawn up by Toronto Public Health that shows three possible scenarios for what could happen if we wait different amounts of time to ramp up public health measures.

In the first scenario, if stricter measures are introduced at the end of October, the total number of people infected could be six times lower by May 2021, compared to taking no action.

In the second, if measures are introduced at the end of November, the number could be three times lower by May.

And, in the final scenario, the number of new infections could still be cut almost in half if new interventions are introduced at the end of December. 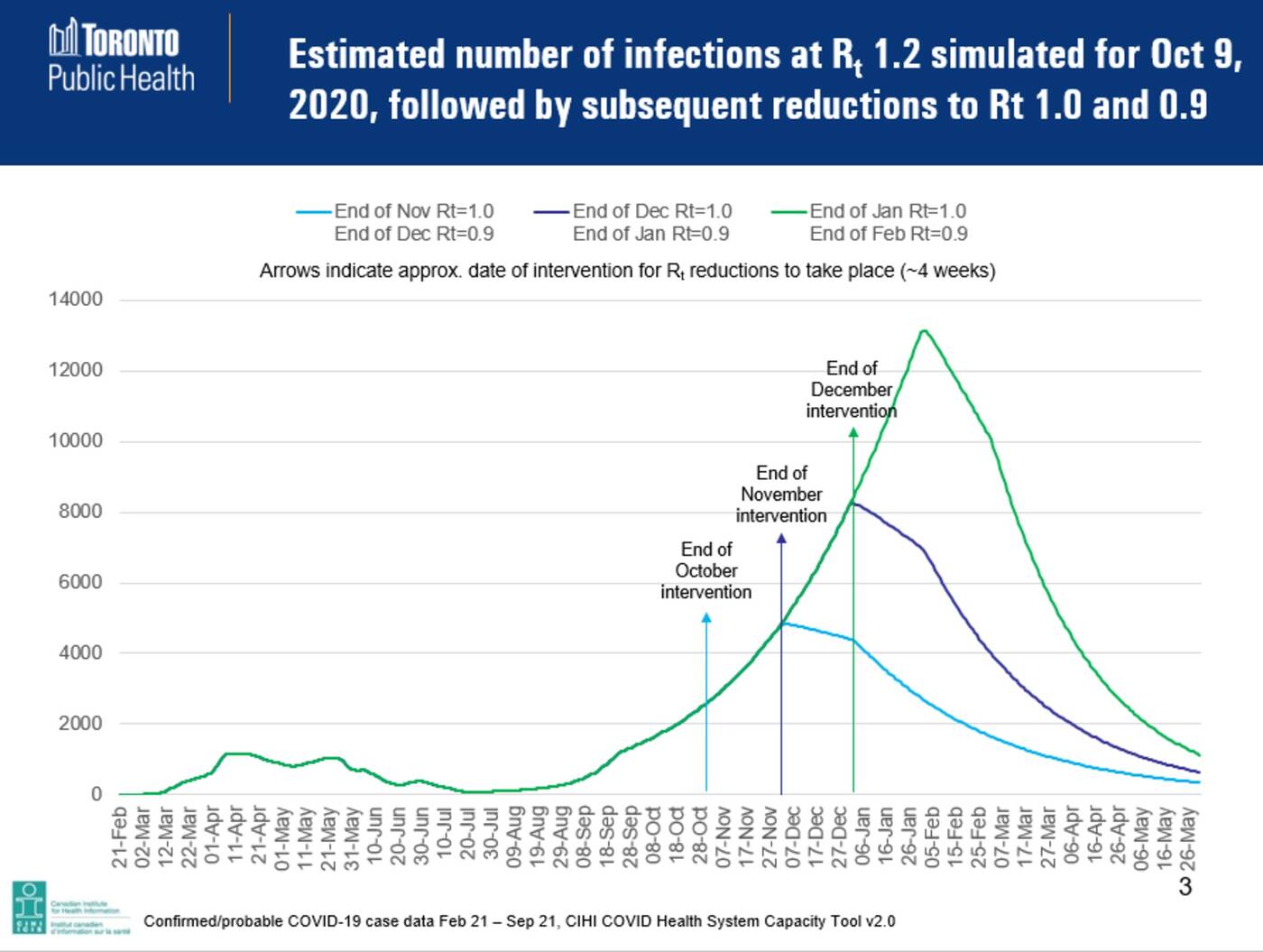 So what are these public health measures needed to ensure we keep case numbers as low as possible? The exact same ones we've been hearing about all along, of course: physical distancing, hand washing, staying home when sick, and mask usage.

Dr. de Villa has also been advocating for the province to shut down indoor dining and fitness classes in Toronto for a period of 28 days to help get the virus under control, but the province has not indicated that they have any intention of cooperating any time soon.

In the meantime, she says it's about individual actions that can and should be taken by residents of Toronto to limit transmission.

"In any scenario, you aren't just passive observers. You do not need to wait to protect yourself and, by extension, everyone around you," she said, directly addressing the public. "The virus will find it a lot harder to spread if you aren't doing things that help it to spread."

The doctor then spoke about Thanksgiving as an example of a time when everyone must come together and make sacrifices for the greater good.

I know #Thanksgiving will look a little different this year & I thank everyone who is making their plans around the risk of #COVID19 to help keep their loved ones & our city safer. https://t.co/OwYPTivyMX

She clearly stated that people should only gather with members of their household for this holiday, and she said even those that live alone should consider connecting with people virtually.

If an individual lives alone and is in need of face-to-face contact for mental health reasons, she said people should meet outside, keep a distance, wear a mask and not get together to eat or drink.

"This year, no one should make the mistake of being in a crowded room full of people they don't live with," she said. "It just isn't worth it."

These are the vaccination rates in Toronto by neighbourhood