If you're at all familiar with quirky Toronto icons, you'll have heard of a man known colloquially as I Hate Rubber Boots guy, who treks around the city in a shirt that has his namesake phrase across it, while also quite confusingly wearing a pair of rubber boots.

He's a character who is often photographed and has been the inspiration behind local art, cartoons and even Halloween costumes — and one resident who dressed up as him for Halloween last year actually had a chance run-in with him earlier this month, and it inspired a hilarious hangout and mini photoshoot that has gone viral on Toronto community Facebook groups.

"I mentioned that, as he’s a bit of a Toronto sartorial icon, I’d taken inspiration from him for last year's Halloween costume. He seemed to find that funny and flattering, and suggested we get together for an coordinated photoshoot," resident Mikhail Honoridez told blogTO.

"I still have the shirt and boots so I saw no reason to refuse."

The duo arranged a second meetup in Kensington Market last Friday, with Honoridez donning his costume to match Rubber Boots Guy's daily attire. They traipsed from Bellevue Square park around the area, heading up to College, over to Spadina, across Dundas and back up to the market.

On the walk, they attracted quite the attention, with passersby stopping, as they do, to take photos. Honoridez also got to learn a lot about the mysterious Toronto figure. 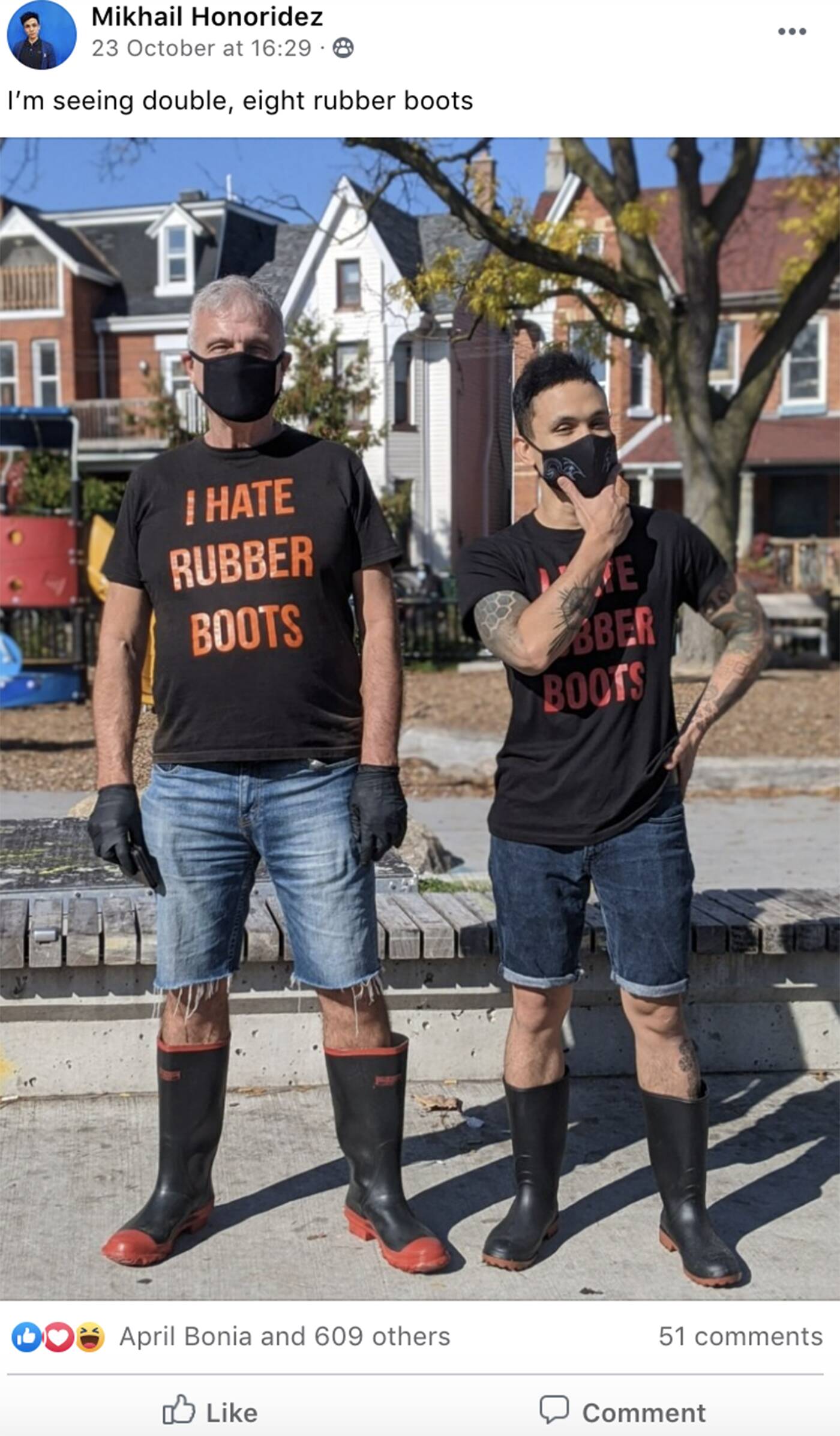 The full and final photo, as posted in the Weird Toronto Facebook group.

"He says that he first began wearing (and loathing) rubber boots as part of a job; when he initially started wearing the ensemble recreationally, he was worried about the derision he’d potentially attract," the fan said.

"As time passed he realized that Torontonians really aren't fazed by much, and he now enjoys and appreciates the attention... He's really representative of a wholesomely bizarre and borderline-zen aspect of a city that is undergoing rapid gentrification."

Apparently, Rubber Boots Guy has amassed quite a collection of clothing bearing his signature phrase over the years — including a face mask — and has multiple pairs of rubber boots, including some hip-waders that he's "especially fond of."

He's also extremely informed and opinionated about Toronto history and politics, having been a long-time resident who gets around the city.

"If you see him on the street, say hello! He loves meeting new people, and is an engaging conversationalist with a wry sense of humour," Honoridez adds. "Though, in my opinion, I don’t think he actually hates rubber boots."