Whether you love it, hate it, or refuse to believe that it even exists, "Toronto slang" has become as much of a cultural phenomenon as people arguing over things like this on Twitter.

Some recent takes on the origins of this lexicon have proven controversial for their general inaccuracies, lack of attribution to Black communities, as well as flat out cultural ignorance.

Others, like this new "Toronto Slang Generator," don't try to whitesplain or take credit for anything — they're simply cute, fun compendiums of real, user-submitted terms and words gleaned from social media.

While we can all agree that it wasn't Drake (or even anyone from Toronto) who "invented" words like "mandem" and "styll," we can also agree that robots pronouncing words like "nyah" and "wifey" are universally hilarious.

TorontoSlangGenerator.com, created by 24-year-old professional bass player and computer programmer Jesse Mccormack, is simple in its design but surprisingly addictive, especially once you turn the sound on.

"Press the button to generate your own Toronto slang, fam," reads a piece of text followed by two buttons: "Generate" and "Text to Speech."

With every click of the generate button, users get a new, randomly-generated string of words typically associated with Toronto youth culture. They also hear a classic TTC "ding dang dong" tone.

The second button obviously triggers a text-to-speech function in which a robotic voice can be heard attempting to say what's on screen. 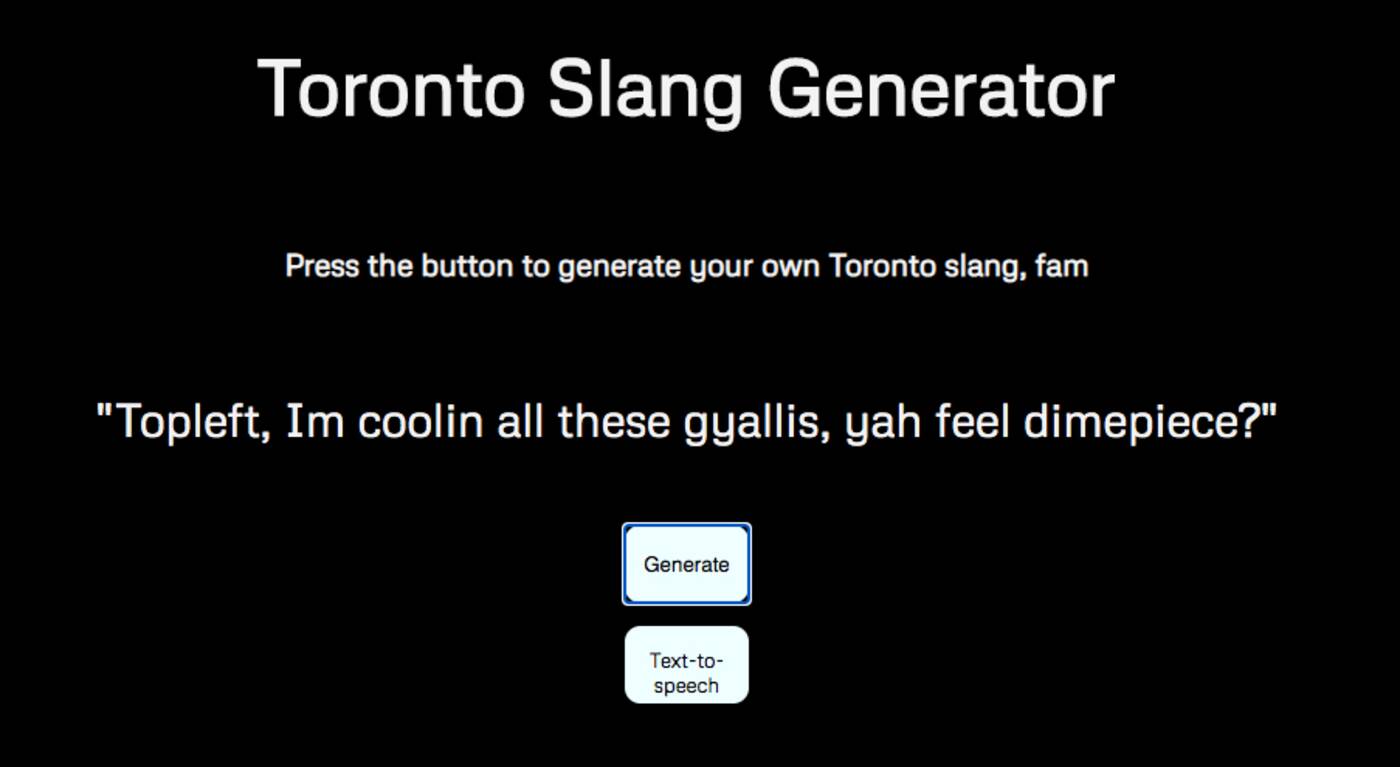 If you haven't heard a computer say "don't cheese me waste yute" or "Jheeeez, mandem got yeeted," I recommend doing so immediately. "Gyal got bare 6ix, worldstarrr," is also pretty funny to hear, even if the sentence itself doesn't make much sense.

"The quotes are almost completely randomly generated, and that was influenced by a linguist named [Noam] Chomsky, who broke down how sentence structures should look (in simple terms)," explained Mccormack to blogTO.

"So random slang words are placed in very specific orders, and I just hope that it makes sense."

The chances of sentences making sense will increase as more and more people submit slang terms to the site, which launched at the beginning of October and is still a work in progress.

"I have an email set up and I gladly welcome people to submit their own Toronto Slang words and sentences to me," says Mccormack, who was born in Toronto but now lives in Barrie. "I do take some user requests for sentences, so they are less random."

As for how he sourced the content in his generator now, Mccormack credits a wide variety of sources, chiefly a popular TikTok creator named Jesse Jaurji.

"A coworker of mine is constantly sending me Tik Toks from a creator named @Jaurji, whose content revolves around Toronto and Toronto 'mans' slang," said Mccormack.

"As a small town white dude, I had no idea about any Toronto slang at all, so I had to rely largely on Tik Toks, YouTube videos, even blogTO had some lists on slang.  It was many hours of reviewing, and I still don't feel like I've even scratched the surface haha."

What he has undeniably done though, is create a smooth-working, web-based, free sentence generator for all to use — not exactly a quick or easy feat.

"My friend Michael and I are twitch streamers (Murphocles and Jesse_Sound respectively), and we coded our own Chatbots," says Mccormack of how the site was inspired.

"He came up with an idea of generating quotes based on his favourite Twitch Streamer, Savko, a very quotable man. I thought Toronto slang was a perfect way of testing out my coding skills, by taking Mike’s code and translating it to Python (he did his in JavaScript)."

"When I finished it, I shared the results to Facebook. I then had people messaging me left right and center to make a website! So, I did."

While relatively new, the site is gaining in popularity through shares alone. Mccormack says he's beyond flattered by the attention, but wants people to know that his intentions with the generator are respectful.

"Toronto is a crazy mix of cultures, and Toronto slang seems to heavily reflect that," he said. "It's important to respect that, as silly as all this is."