The Marian Shrine of Gratitude may not be known to many in Toronto but Roman Catholic pilgrims worldwide know its name.

It's no Mecca or Bodh Gaya but this tiny place of worship tucked behind a parking lot off Weston Road has an origin story of biblical proportions. 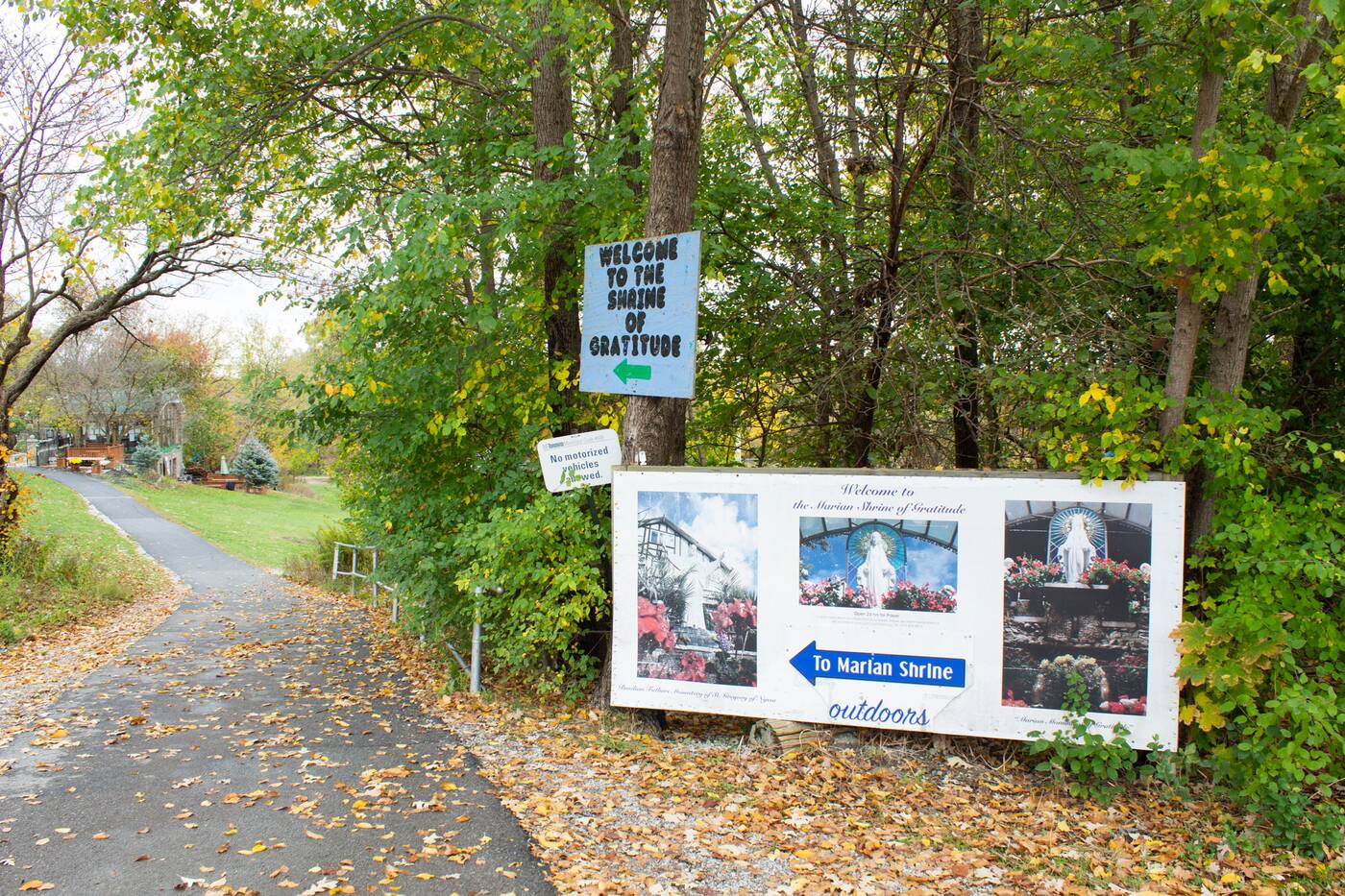 The Marian Shrine of Gratitude is located behind the St. Bernadettes Family Resource Centre.

Open 24 hours, 365 days a year, the outdoor ode to Mother Mary belongs to The Order of Saint Basil The Great.

Once the summer home of the wealthy Gardiner family (of the Gardiner Museum), the property has belonged to the Basilian Order since 1958. 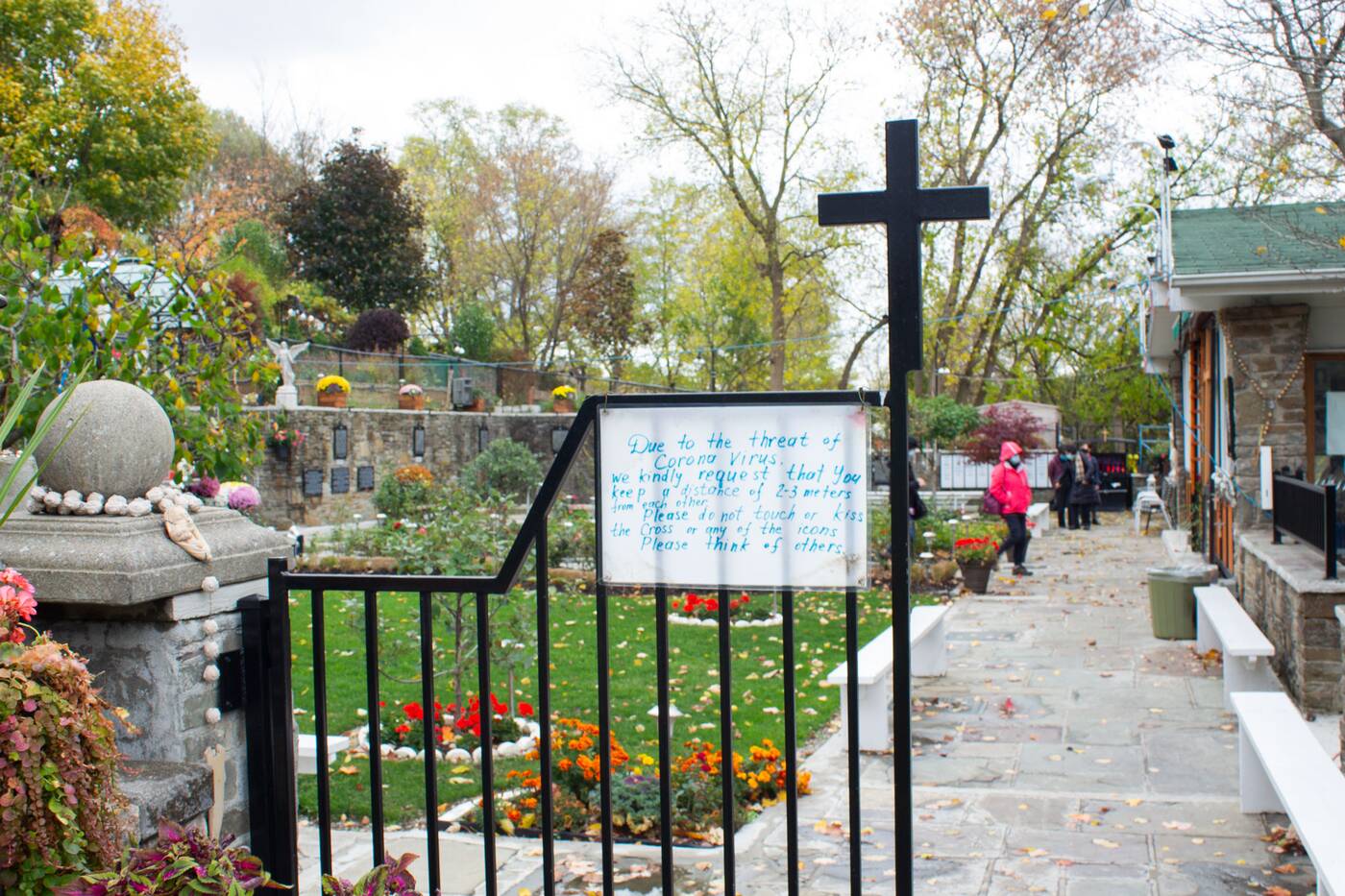 Find it located behind the St. Bernadettes Family Resource Centre. Signage off the centre's parking lot leads to the shrine, which sits atop a hill overlooking the man-made Humber Valley Pond.

It's in this perfectly manicured lot — lush with evergreens, flickering votive candles, trees adorned with hanging rosaries and pots of colourful blooms — where people have purportedly been healed of all sorts of ailments, from cancer to broken hearts. 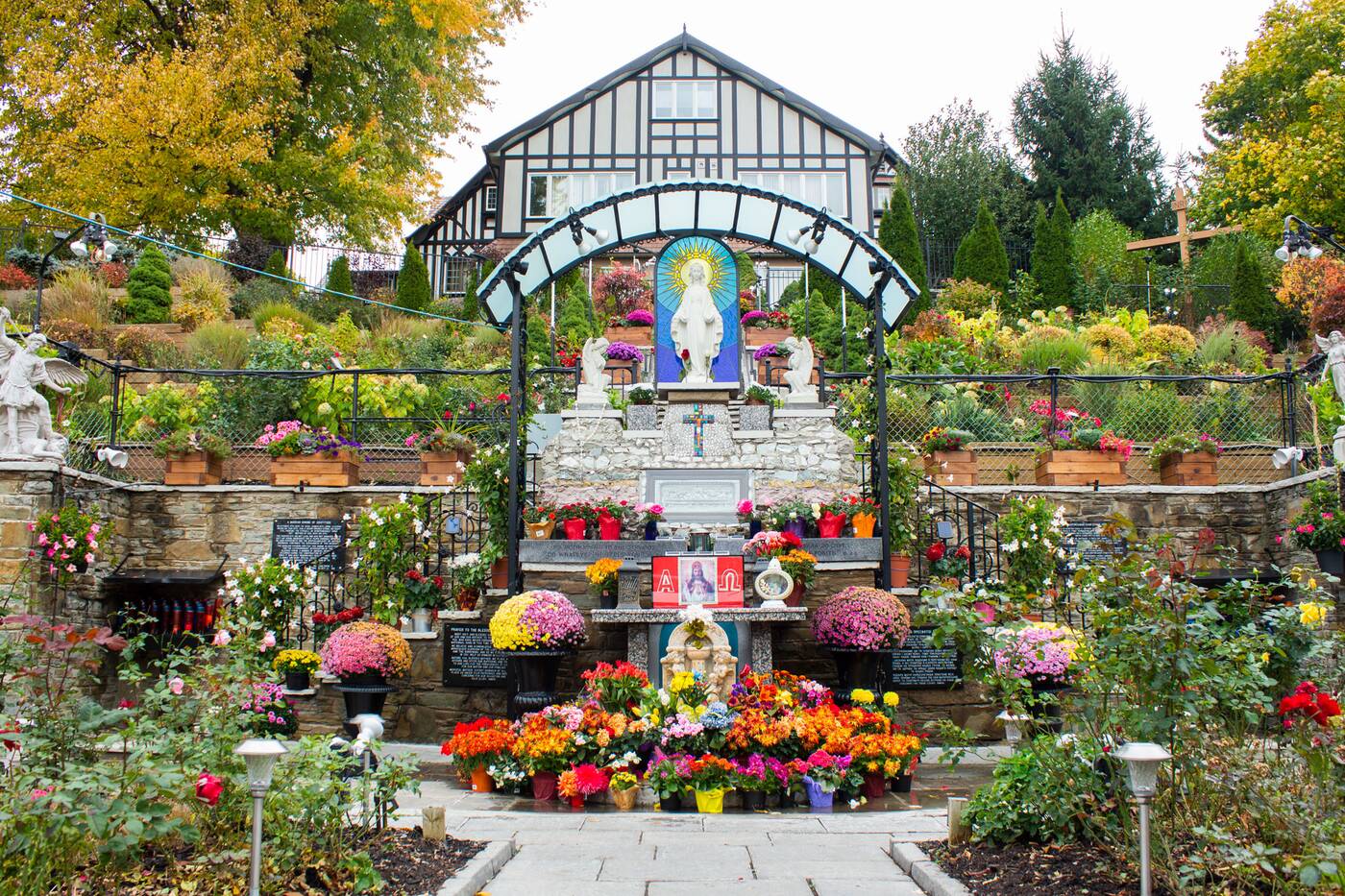 The shrine is dedicated to Mother Mary following a purportedly miraculous event involving an eye injury.

The shrine's creation is predicated on nothing short of a miracle if you believe in those sorts of things.

On Oct. 4, 2004, Father Basil Cembalista, a priest with the Ukrainian Basilian Monastery, was cleaning the neglected piece of land below the monastery when his right eye was punctured by an old tree branch. 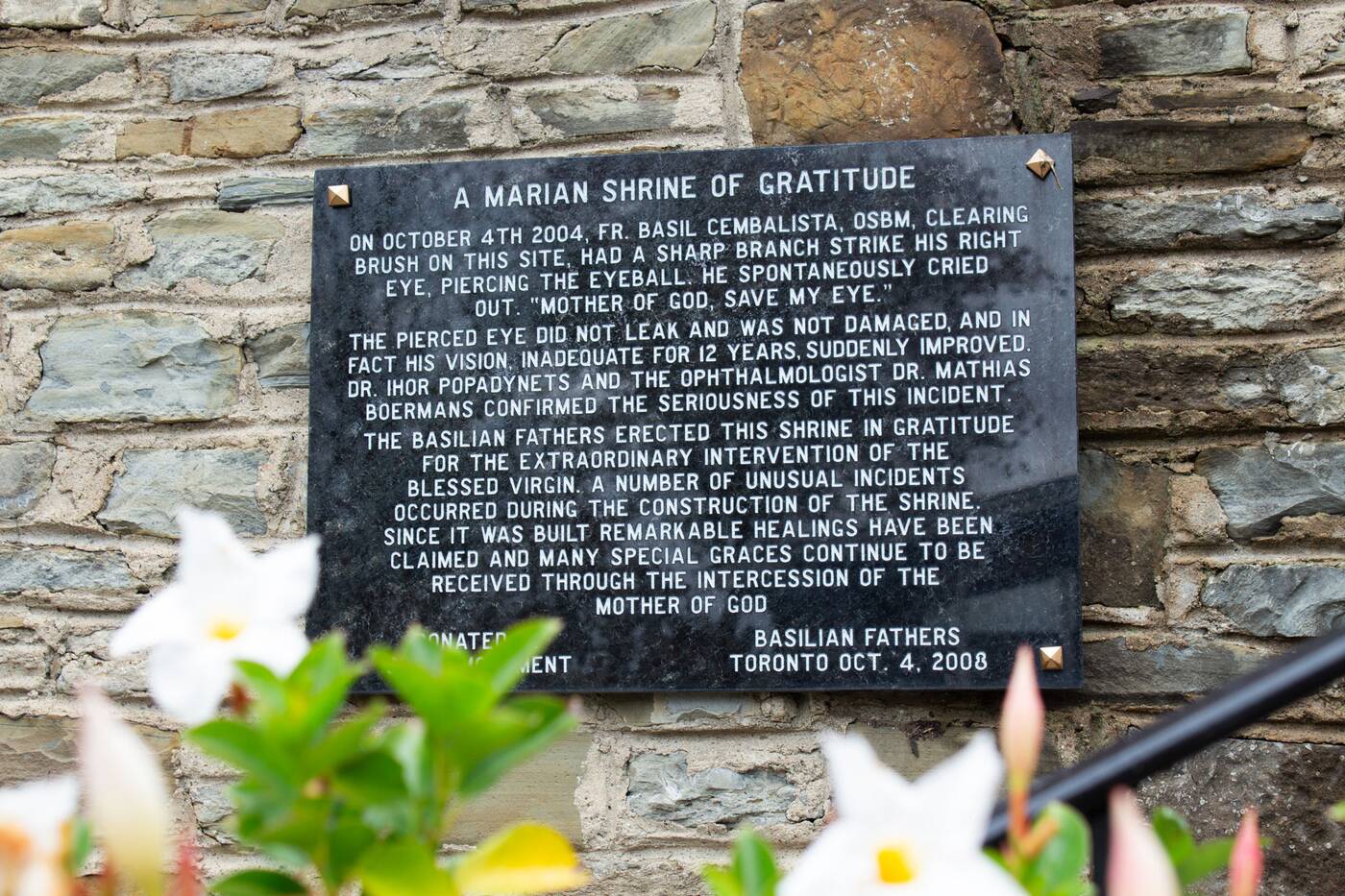 The shrine's origin story is documented widely online and on this plaque by the steps.

As the story goes, he cried out for Mother Mary to restore his eye before he was rushed to the doctor. He suffered from a corneal abrasion, but by the end of the day, was completely healed.

In fact, Cembalista, who'd suffered from terrible eyesight for the last 13 years, says he walked away from the incident with 20/20 vision. 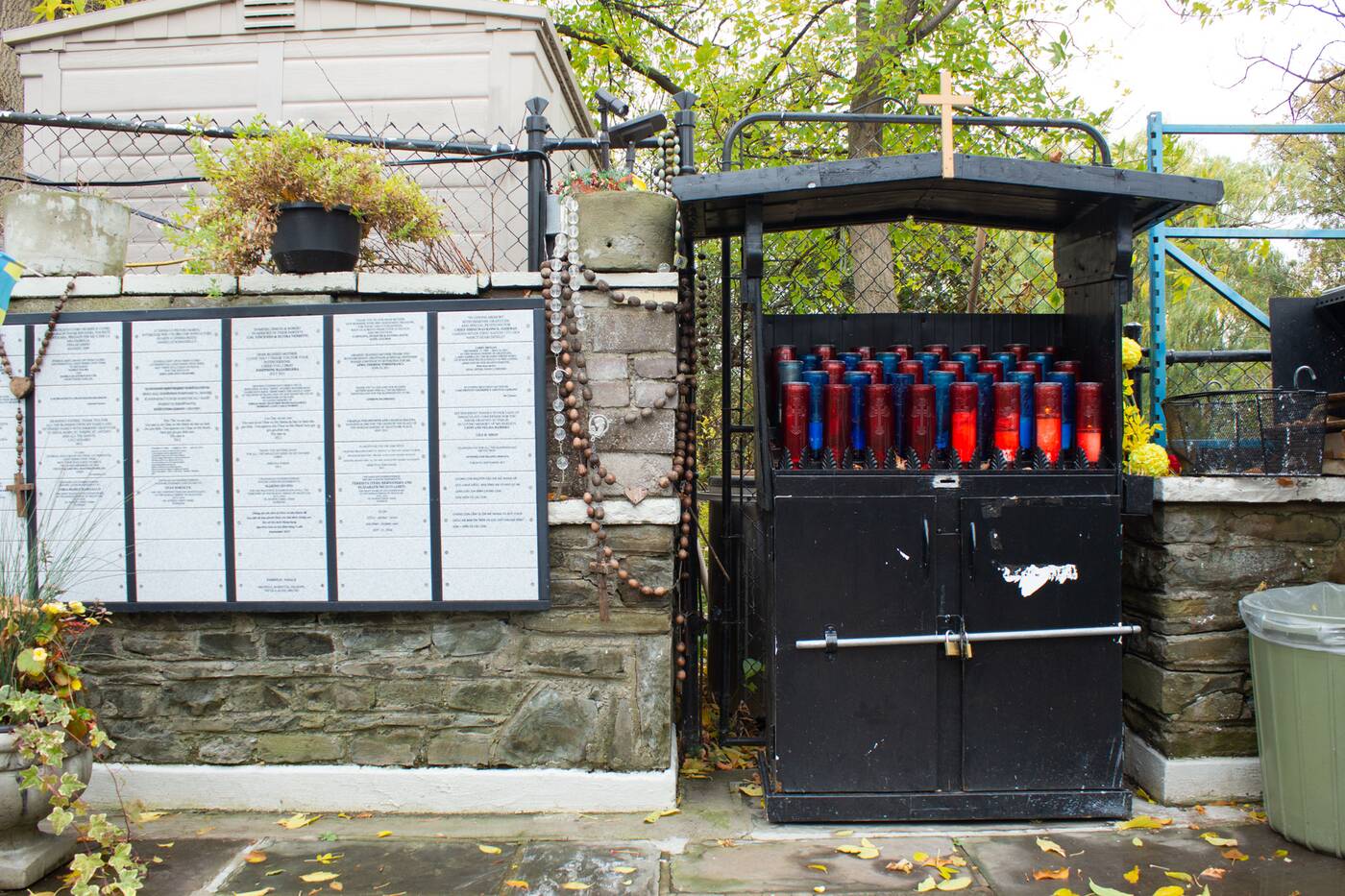 Visitors are free to light a votive candle at the shrine.

The injury is well-documented enough to appease those who follow the evidential reasoning approach.

Go to the shrine's website and you'll find physician's notes, plus two separate driver's licenses issued to Father Cembalista by MTO, one with the X restriction (indicating an eye condition), and then later, without. 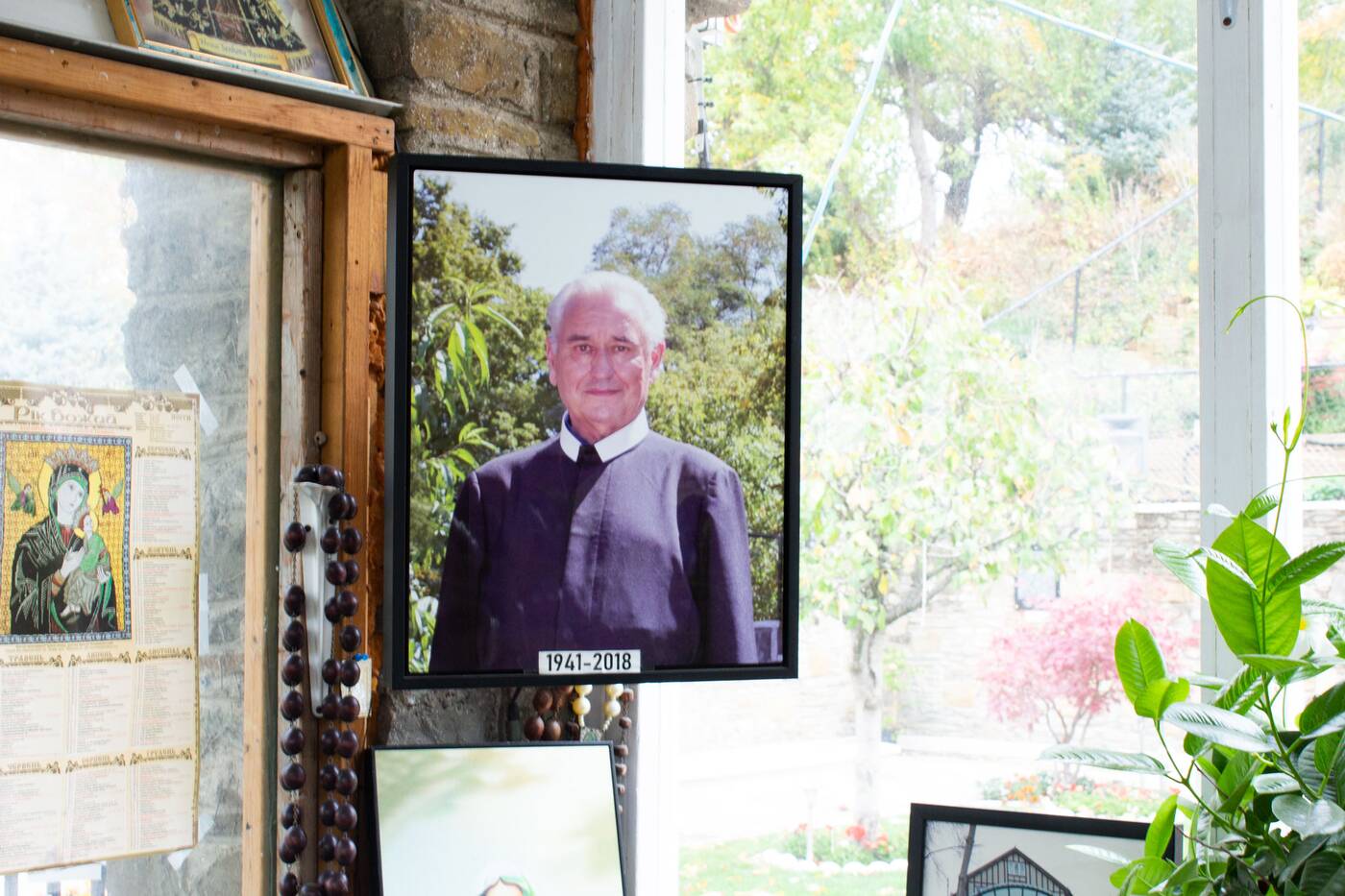 Father Basil Cembalista passed away in 2018. He's pictured here after the incident, glasses-free.

If you need more proof, there's a photo of Cembalista,who passed away in 2018, in the sheltered congregation area, glasses-free.

As someone who's had astigmatism since they were eight, the sight of Cemablista's seraphic smile fills me with (forgive me Lord) envy. 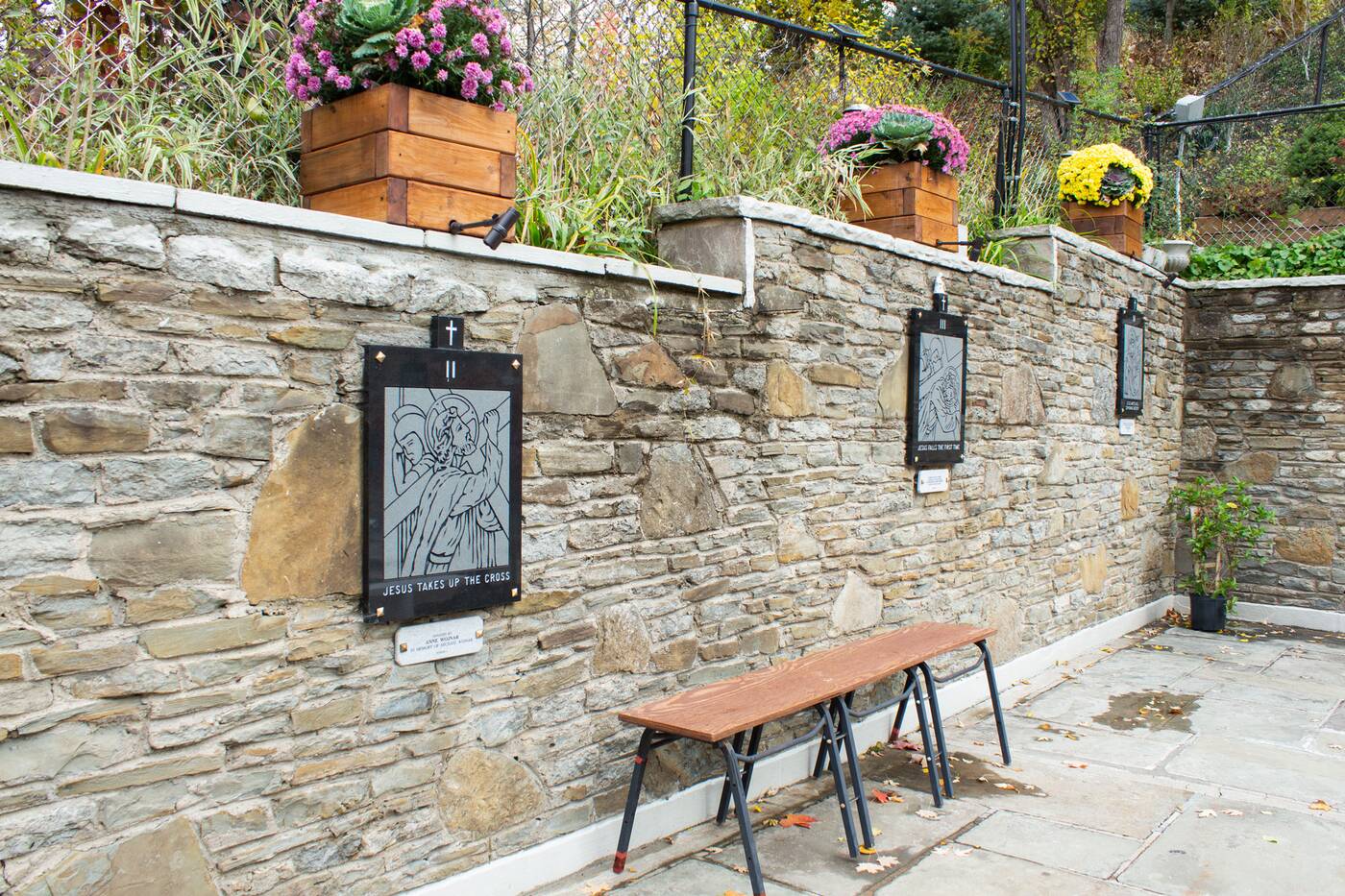 There are areas around the shrine for sitting and praying.

With the blessing from the late Reverend Myron Chimy, a white marble statue of Mother Mary was erected where the accident took place. You'll also find a multi-coloured stone crucifix and metallic icon of the last supper.

The main area of the shrine, which sits lower from the steps leading up to the monastery, is actually in the decades-old stone structure of the Gardiner's former pool. 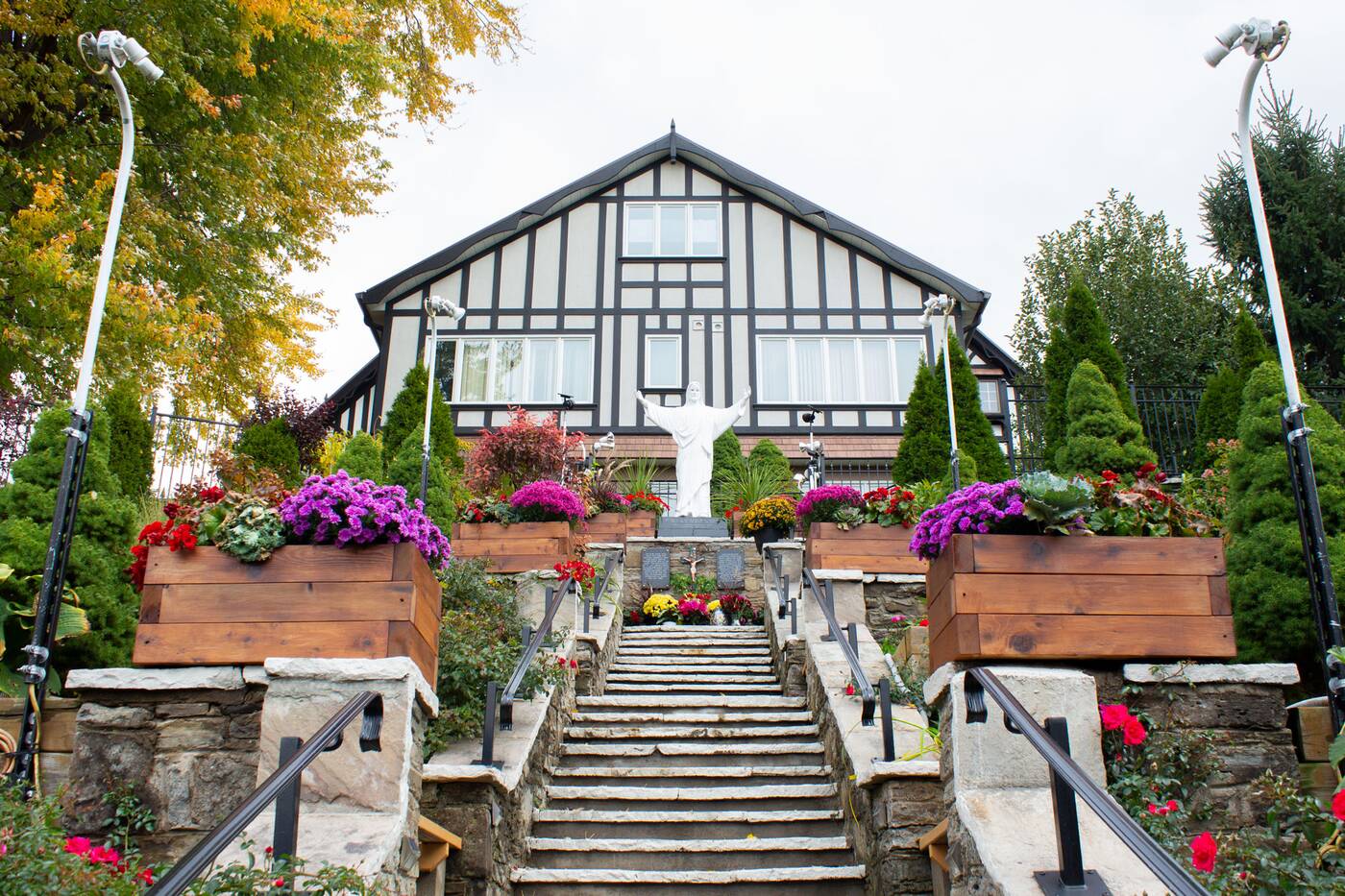 More than 50 steps leading up to the monastery is fronted by a statue of Jesus.

More miracles have been documented at the Marian Shrine since its officialization in 2005.

In one instance, a woman named Nadia Rosati had been fighting lung cancer when she reported feeling a warm feeling in her chest while visiting the shrine. CT scans shortly after her visit came up cancer-free. 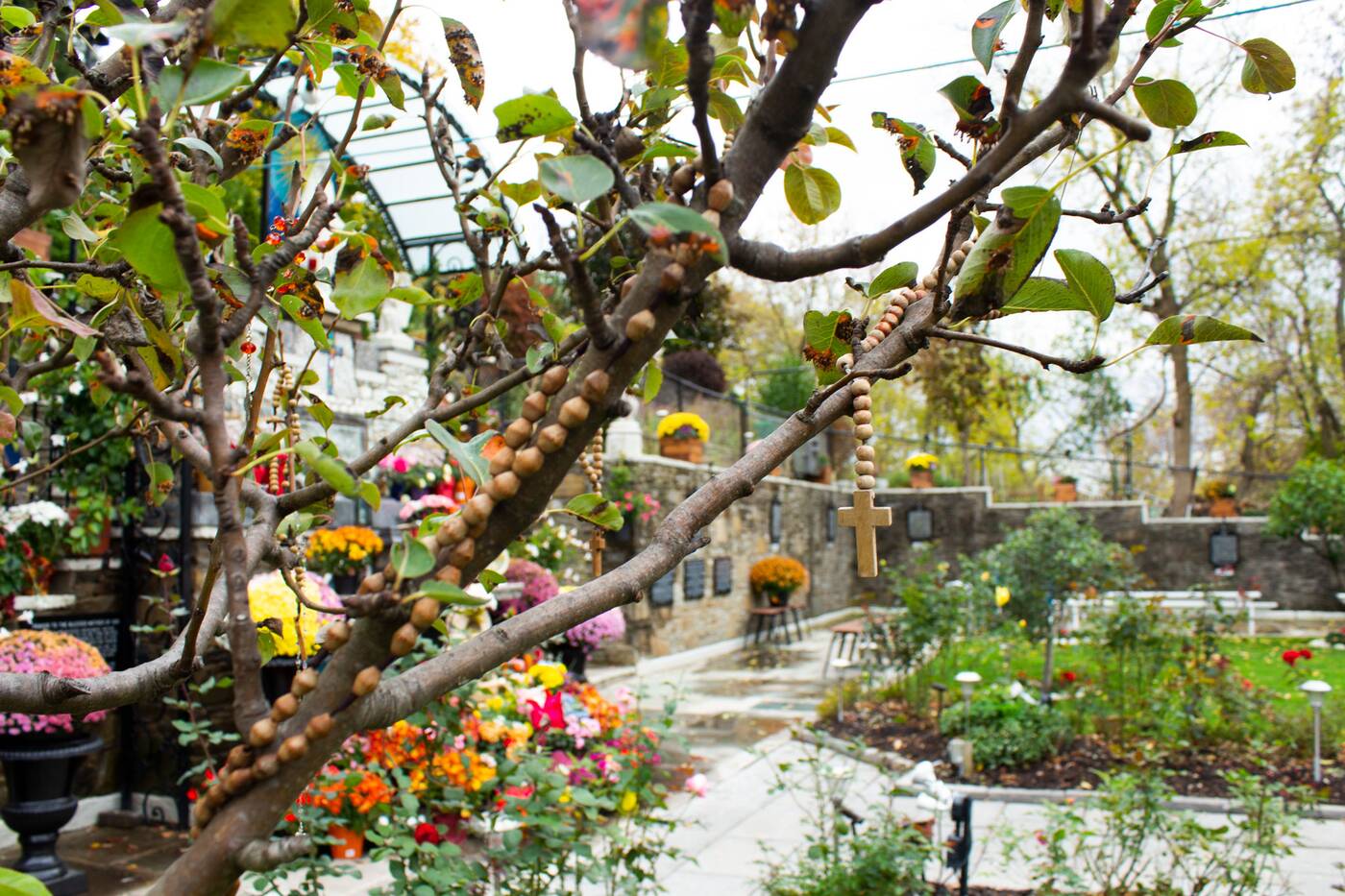 Every tree in the shrine is adorned with hanging rosaries

Another woman named Rose Tomasone says she'd been suffering from neuropathy in her feet, but since praying at the shrine, has been walking without a cane for years.

Over time, this garden has flowered with the help of donations into a serene space for solitude. It runs special events from May to October, night processions, First Friday masses, and 2,000 Hail Marys, among other retreats. 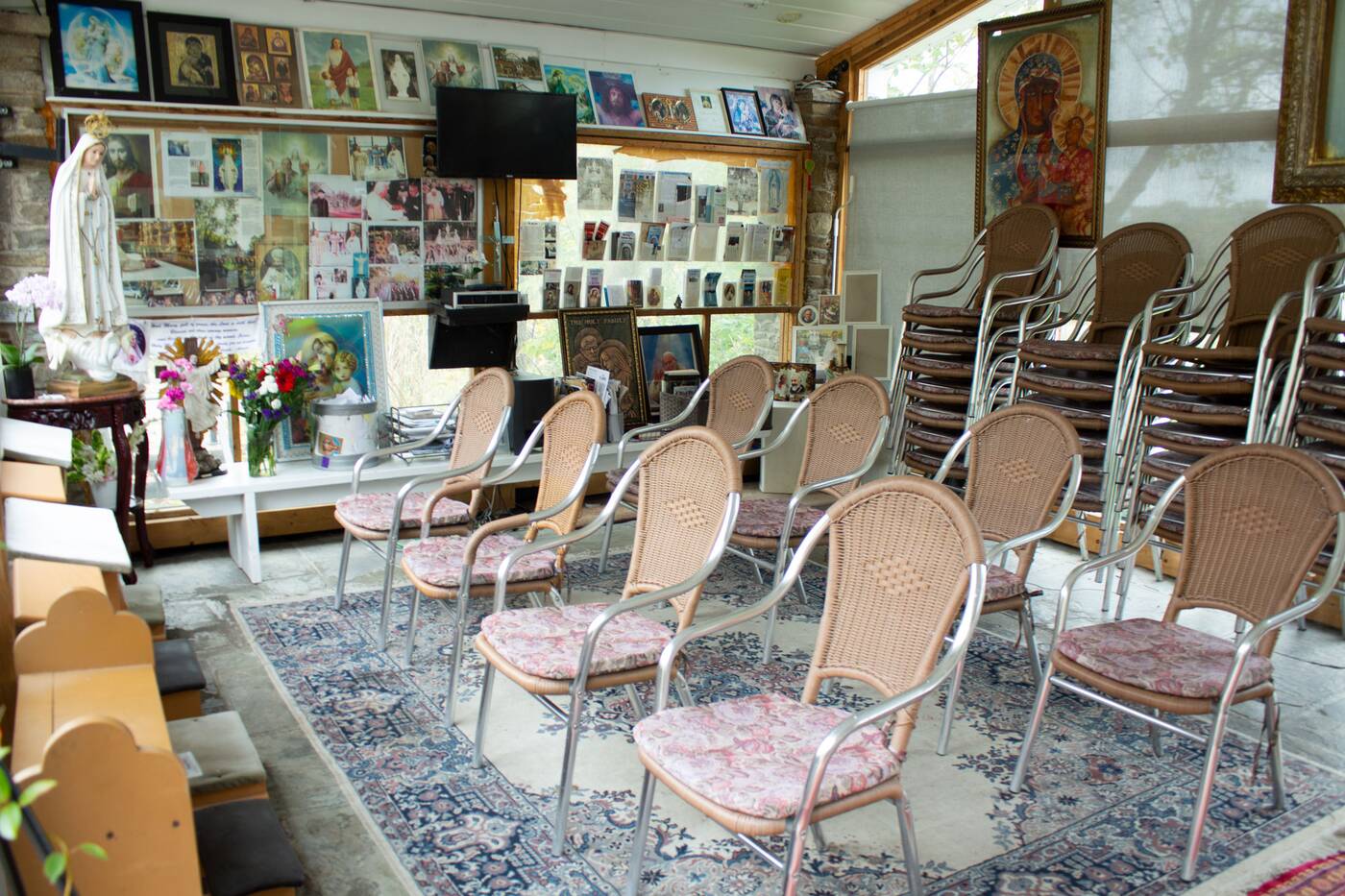 A sheltered area has a makeshift pulpit.

By order of Rome, the Marian Shrine did face the threat of closure in 2019. Thanks to more than 5,000 petition signatures from the community, it appears the crisis has been averted for now — another holy miracle?

Even those not religiously inclined will feel a sense of peace here. Especially amidst a pandemic, a quiet place to sit with one's thoughts is something to be thankful for. 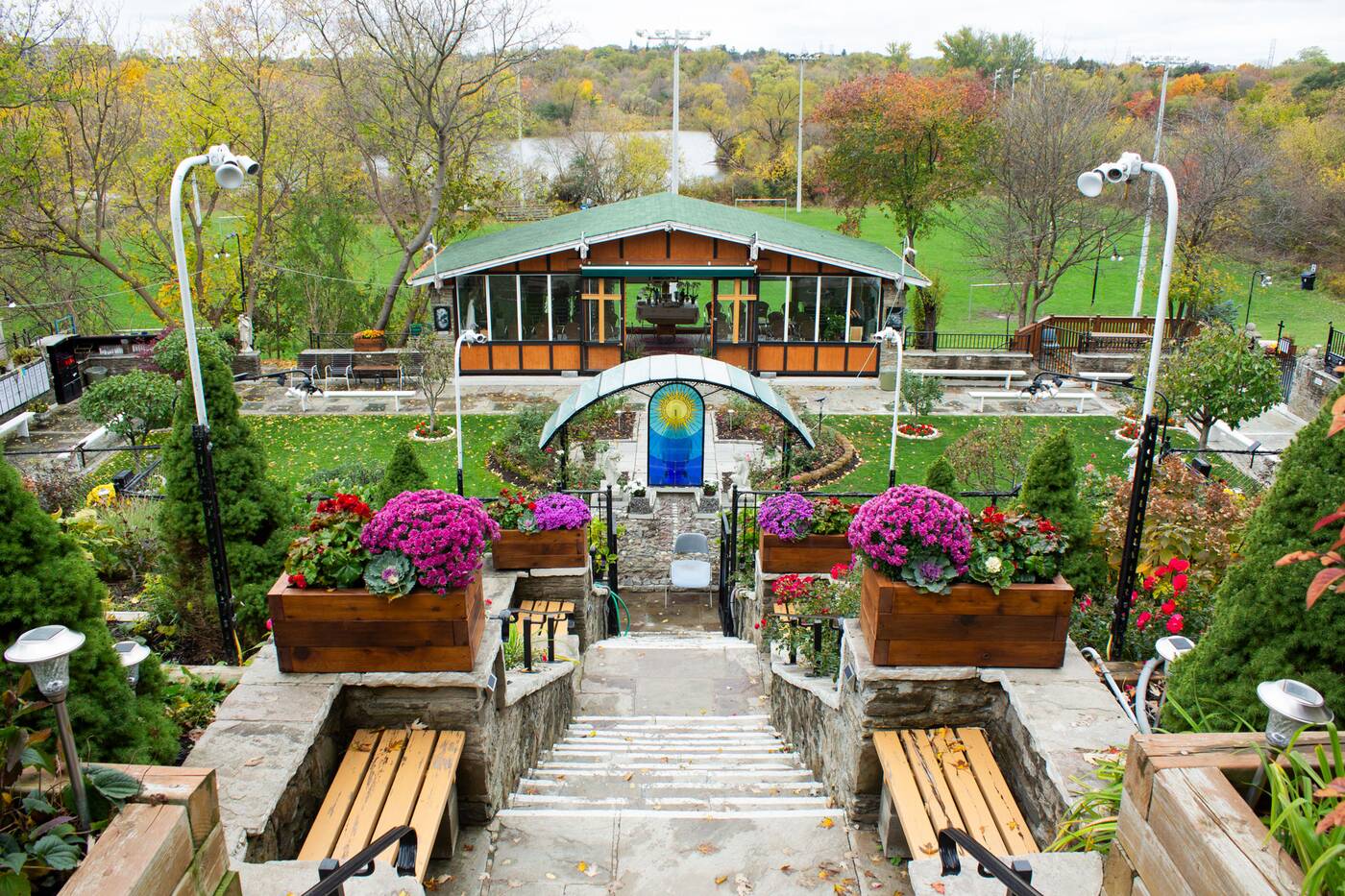