All along Toronto's Humber River, scenic trails run from north to south on the banks of this Lake Ontario tributary — east to west, if on the West Humber Trail.

There's no shortage of watery vistas and bridges all the way from Steeles down to the Martin Goodman Trail. 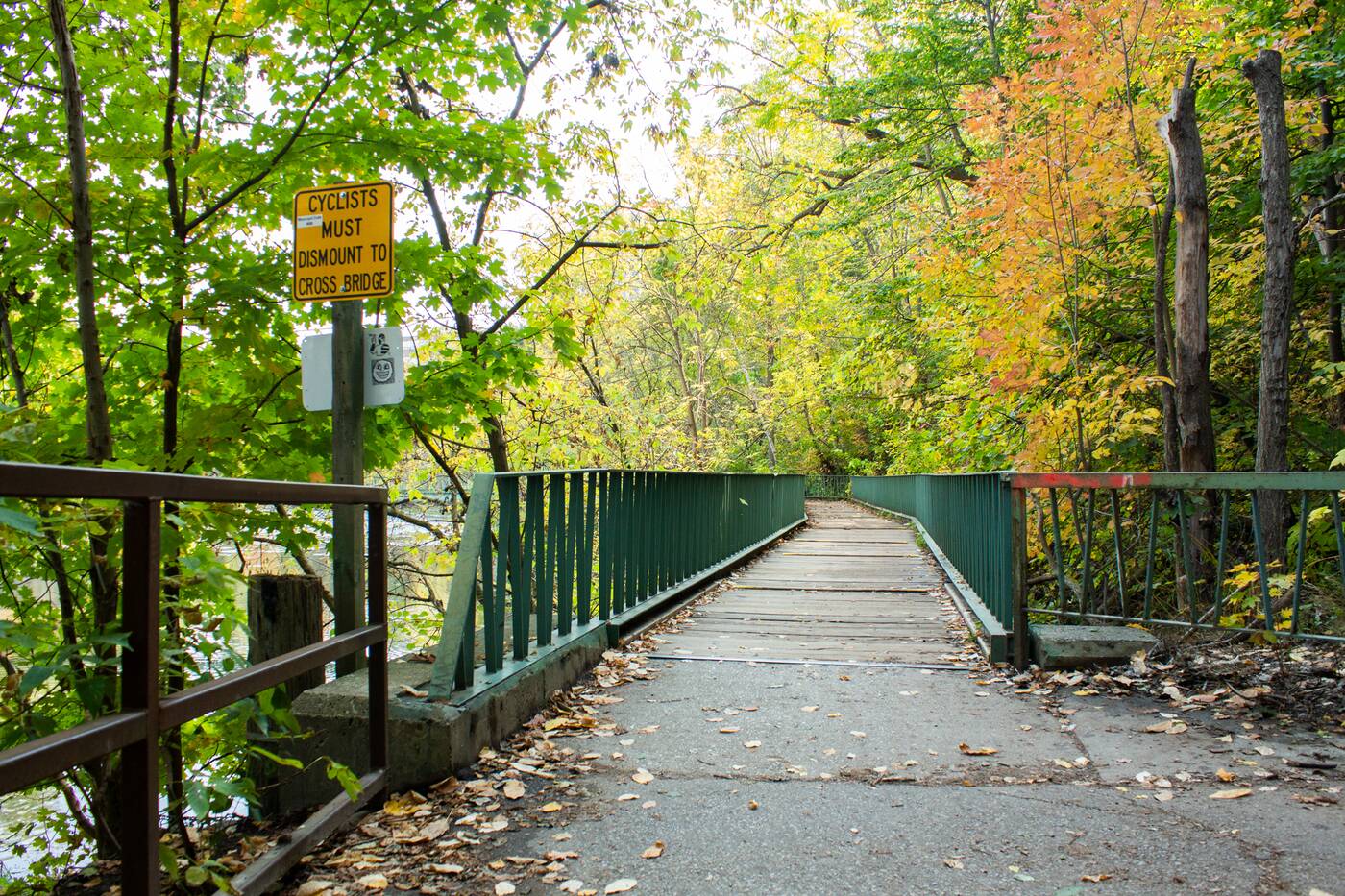 You can find the lookout bridge south of Lambton Woods and north of Dundas Street West.

One such lookout sits right before a bend in the river, before the Humber River Recreational Trail hits Dundas Street.

Emerge south on the trail from the dreamy canopy of Lambton Woods and you'll find the faded turquoise pedestrian bridge, resting atop concrete footings: the only remnants of the Guelph Radial Line. 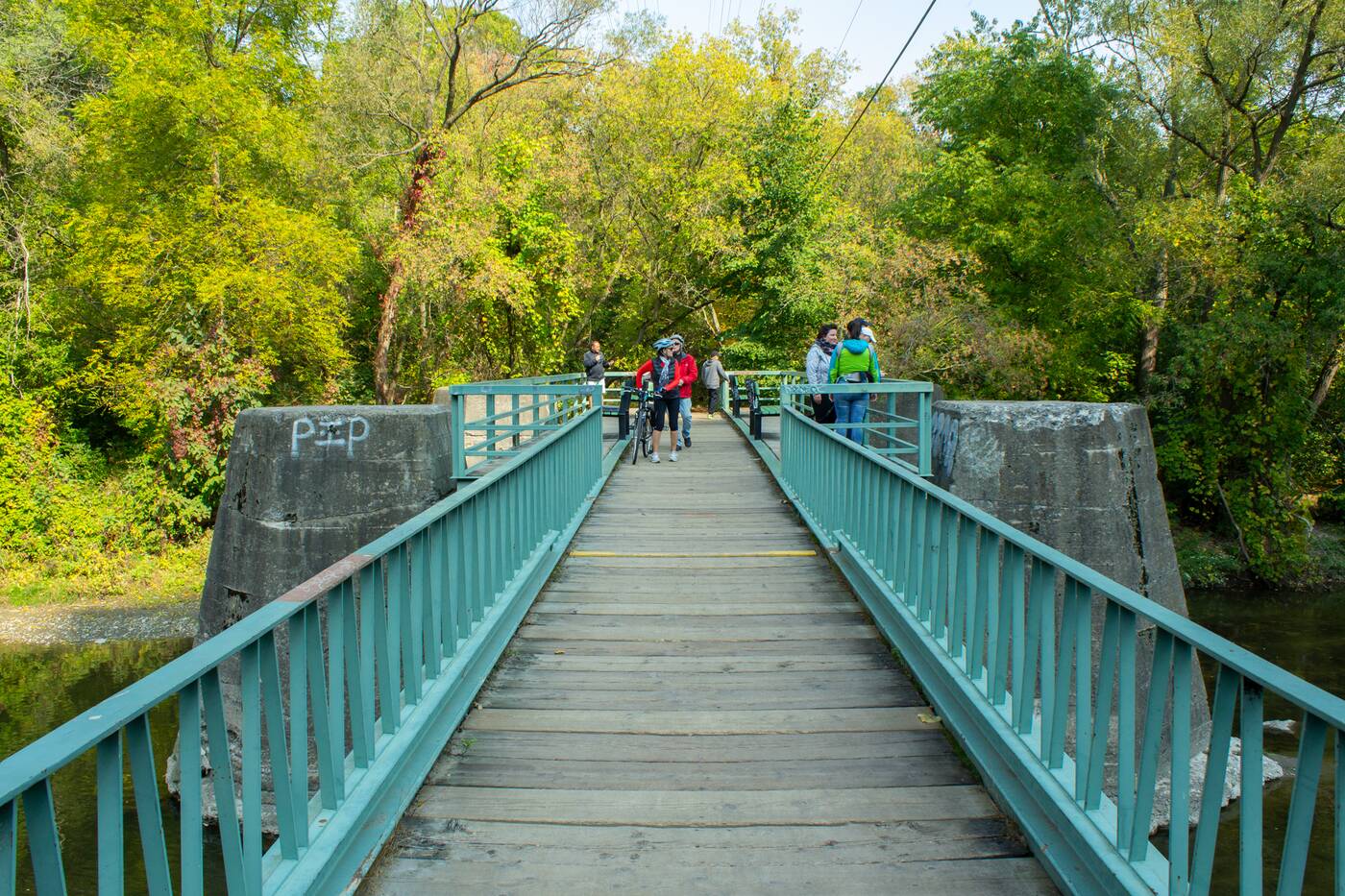 The turquoise bridge used to be part of the Guelph Radial Line.

Today, the bridge is the perfect pit stop for hikers taking the trail from James Gardens (a good place to park if accessing the area by car), perhaps on the way down to the Humber Marshes. 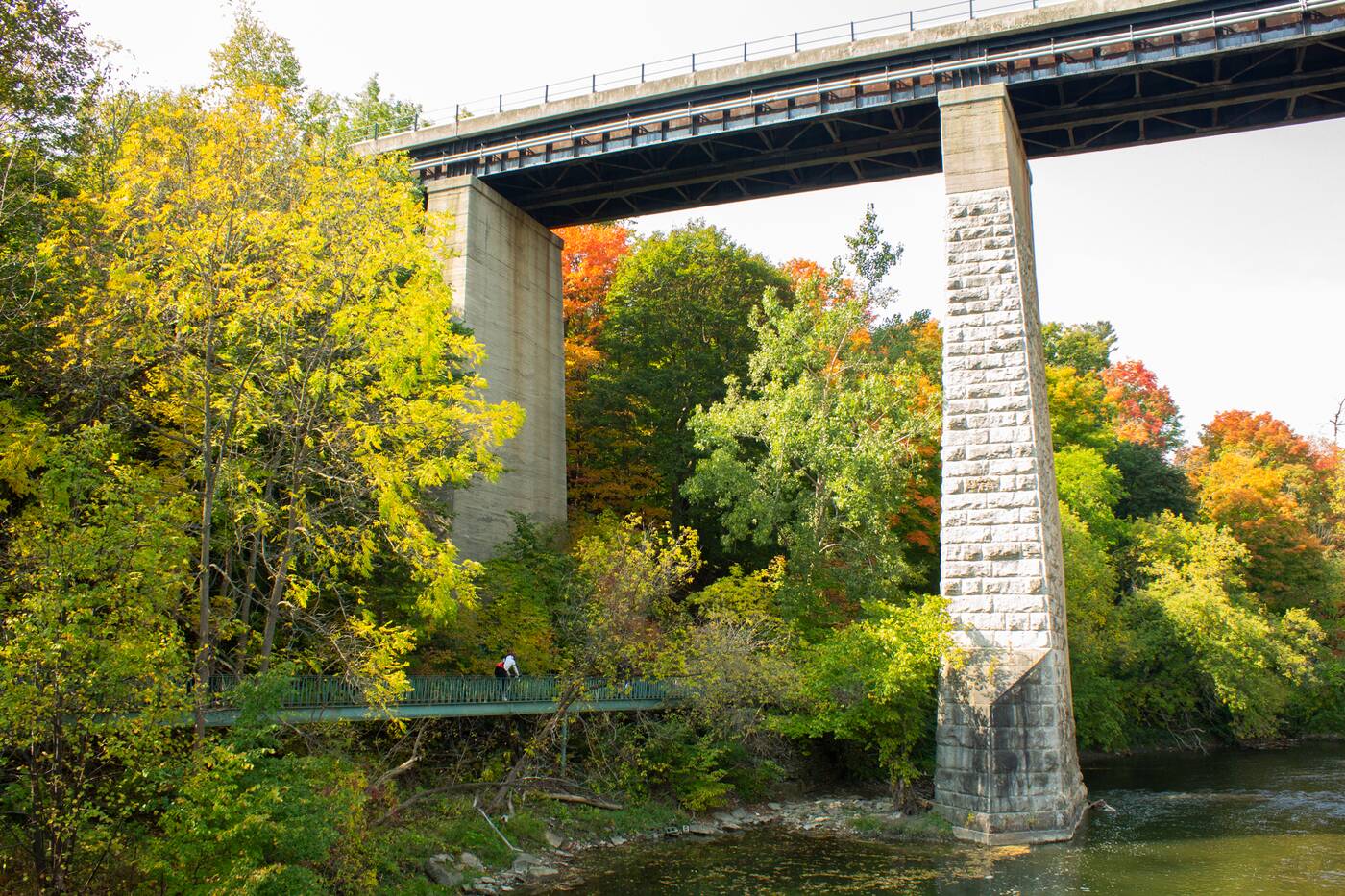 The bridge runs beneath the Lambton Canadian Pacific Railway Bridge before crossing the Humber.

When it was originally built in 1917, the bridge included a 61-metre trestle before an extension was built in 1925. The Toronto and Region Conservation Authority (TRCA) describes it as "a high degree of achievement for its time." 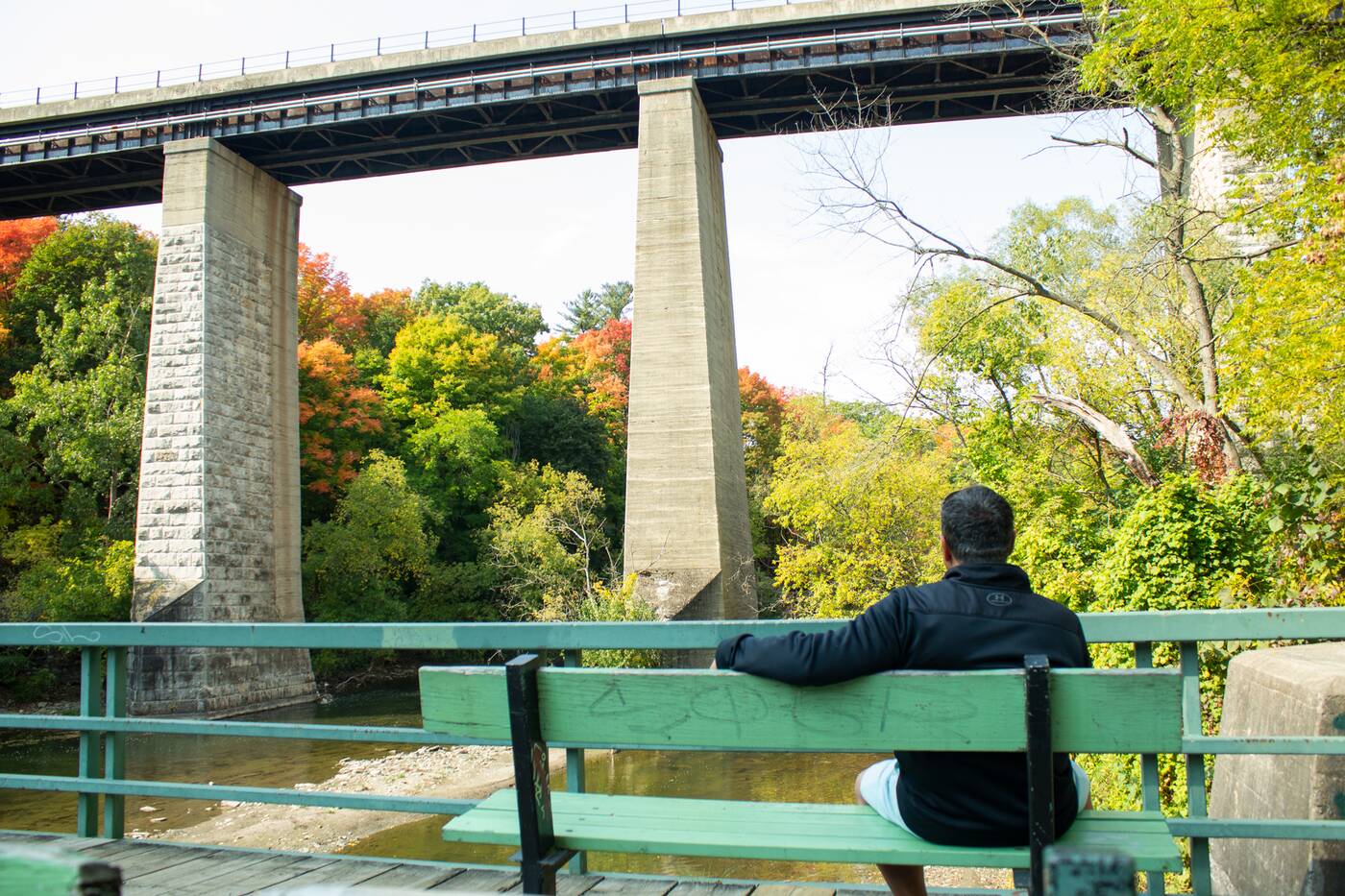 The centre part of the bridge has a number of benches with a great view of the CN bridge.

The Guelph Radial Line no longer exists: it operated from 1917 to 1931 as an electric rail between Guelph and Toronto, the most extensive line of the Toronto Suburban Railway.

All that's left now are the concrete footings that hold up the main parts of the pedestrian bridge. 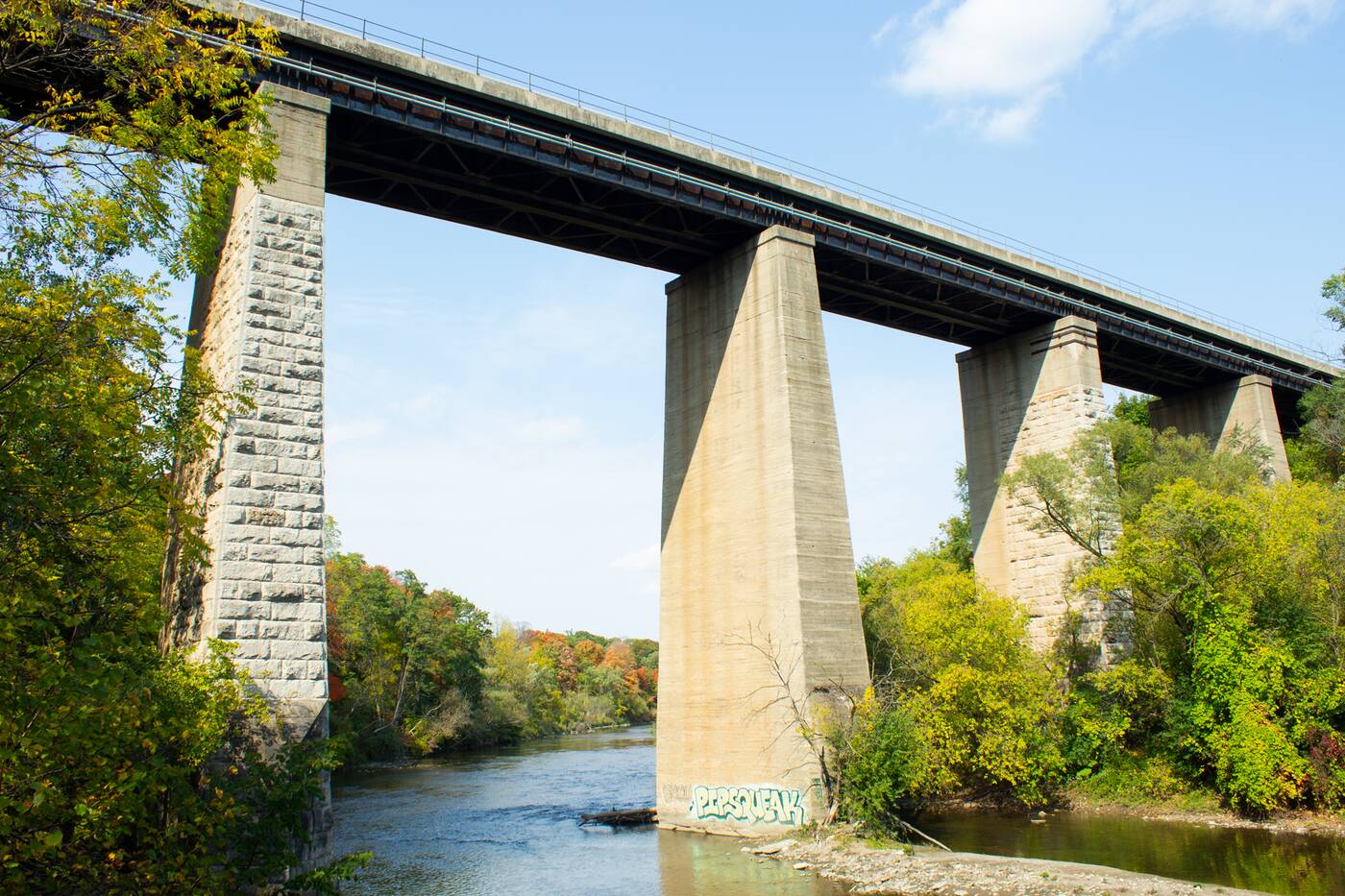 The Lambton Canadian Pacific Railway Bridge was built in 1874.

Complete with benches, it gives an expansive view of the towering Lambton Canadian Pacific Railway Bridge north of it, which was built in 1874. 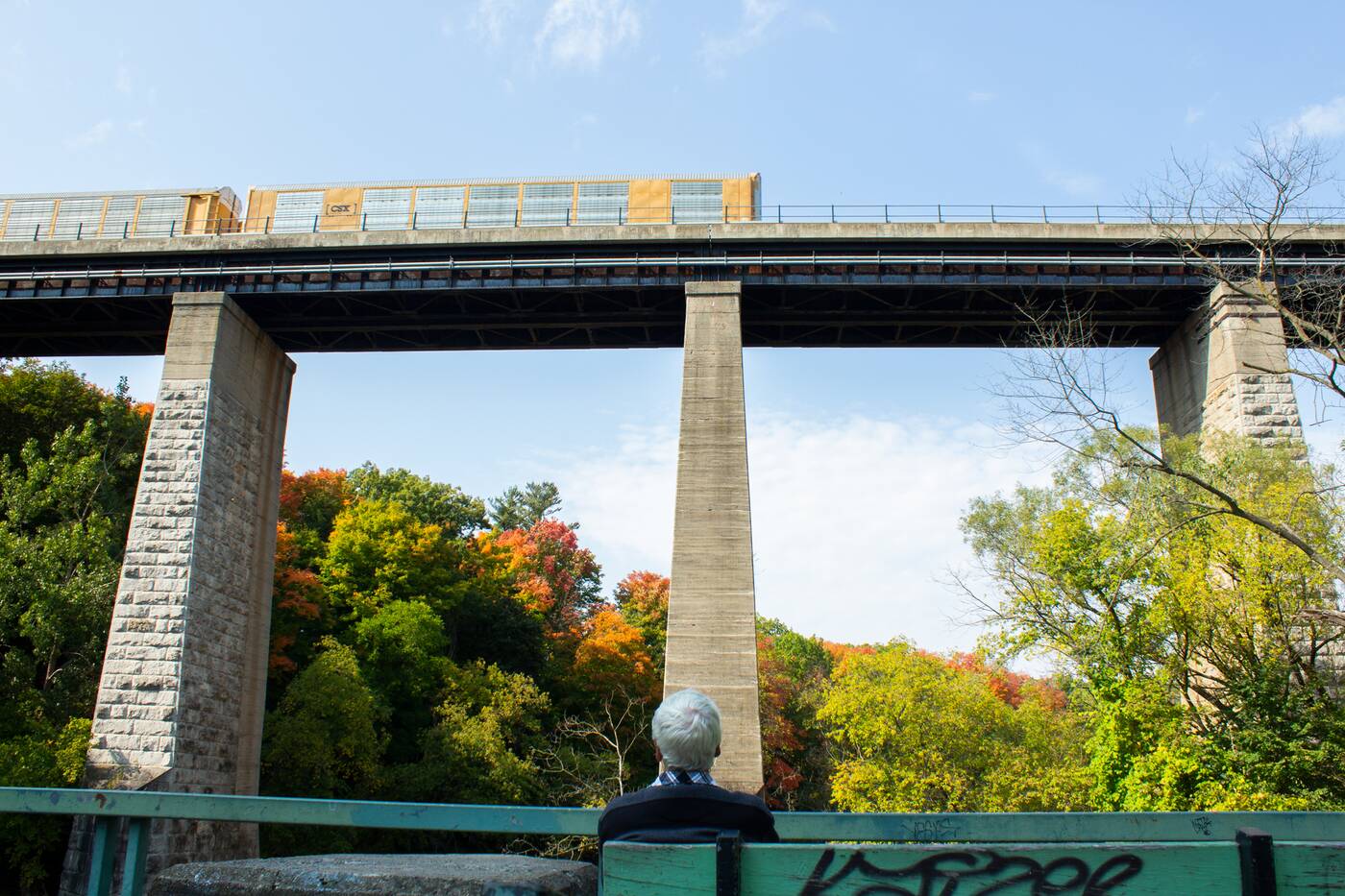 Wait long enough and you'll be able to watch and hear a freight train, or perhaps a passenger train, chugging along its single line track.

Being suspended over water, while looking across to another, much taller bridge, is sort of a nice reminder of the simple feats of human engineering if you needed one. 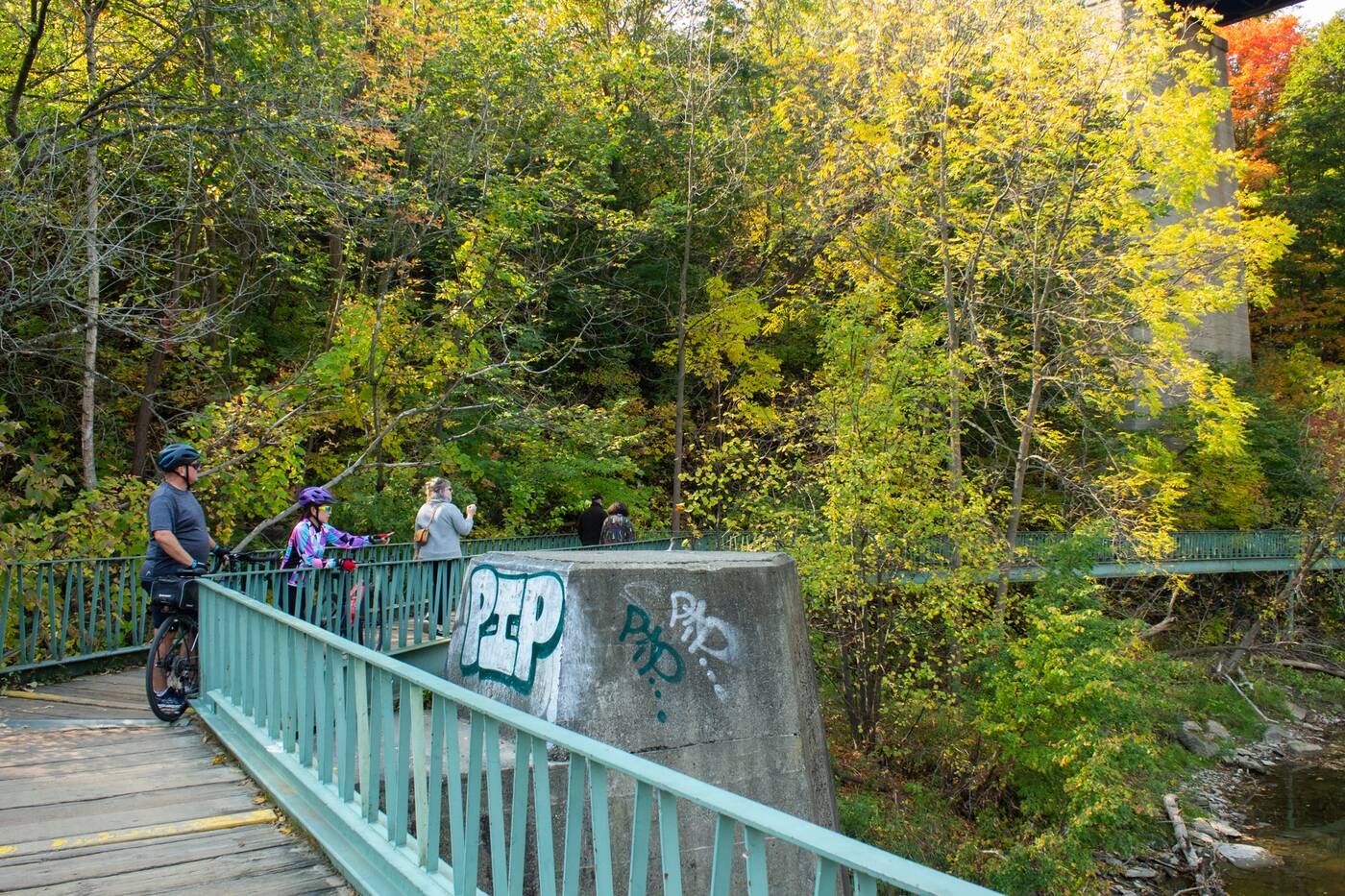 The Humber River Recreational Trail is a pedestrian and cyclist trail that runs along the river.

The east-west perspective also provides an ideal north-south vantage point of what used to be the Toronto Carrying Place, a large reason why the city as we know it exists today. 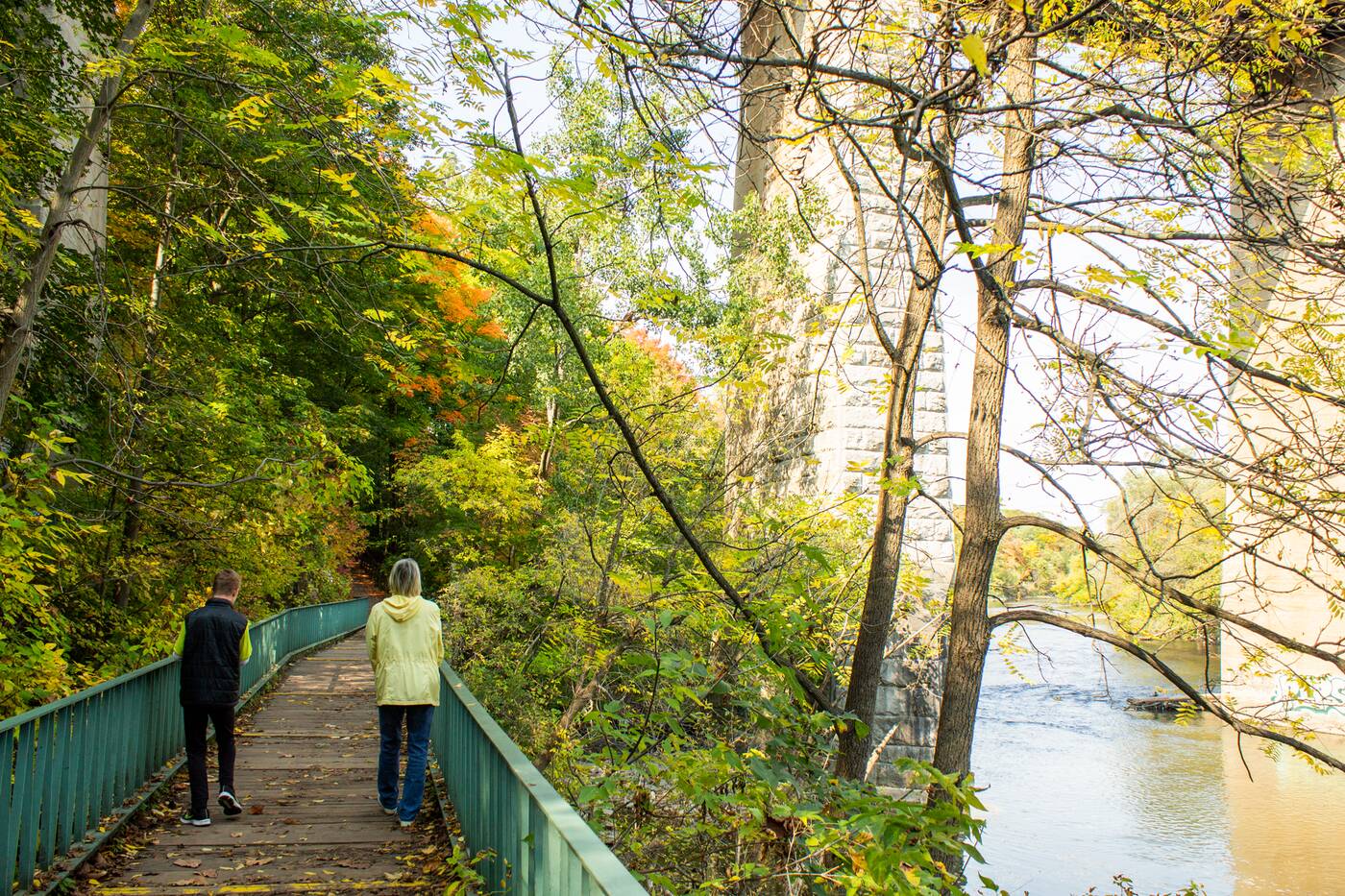 There are a number of bridges and footpaths along the Humber River Recreational Trail.

The centuries-old Indigenous trail followed the east bank of the Humber and was most recently used by the Wendat, Onondawahgah, and later, the Mississauga First Nations to travel between Lake Ontario and Lake Simcoe.

Later it was used by colonialists, from traders to priests, between 1615 and the early 1800s. It's along this route that Toronto has purposefully built many railways and hydro corridors. 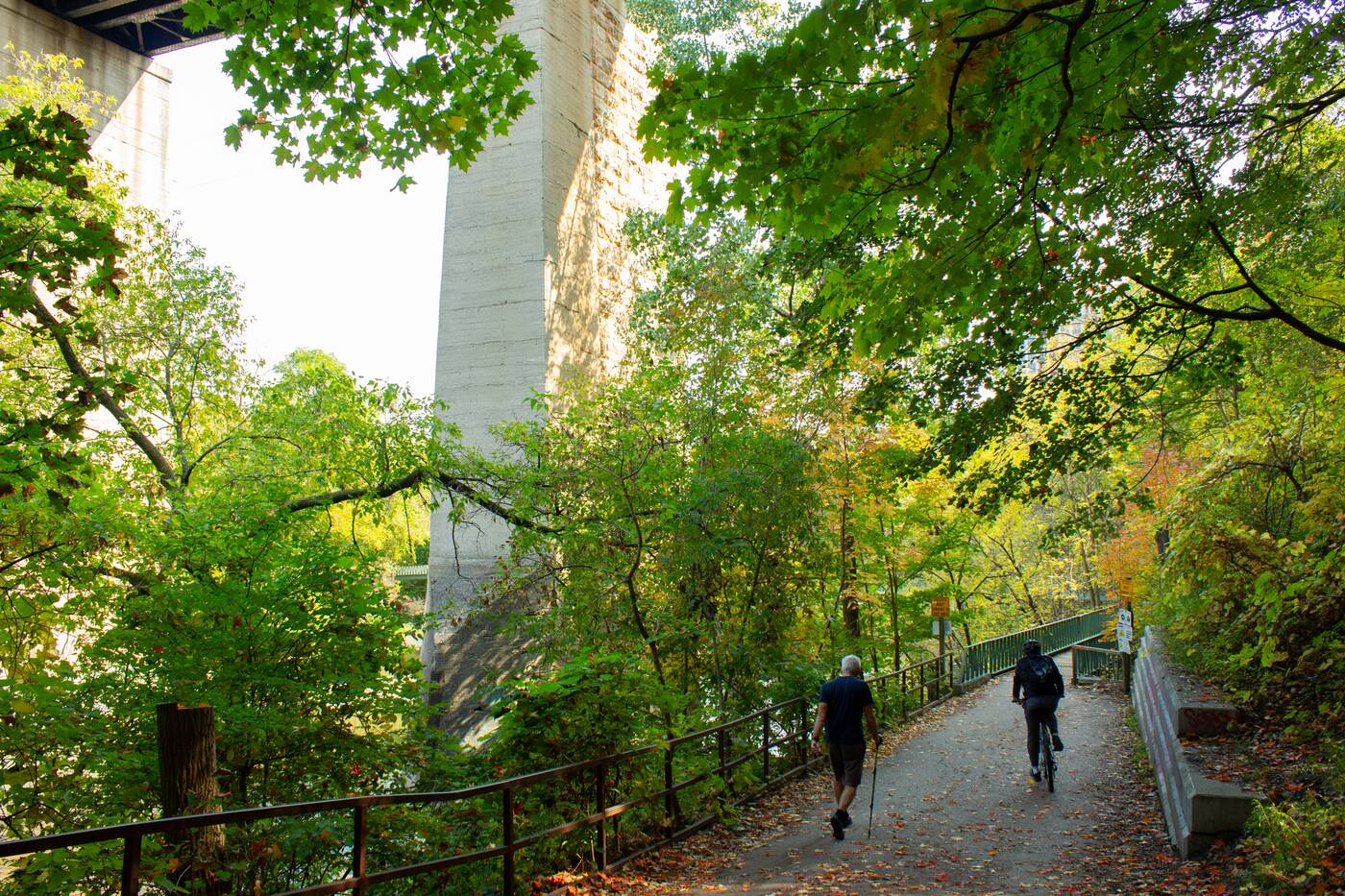 North of the railway bridge, looking south toward the entrance of the pedestrian bridge.

Not much portaging happens along these shores these days —  the Carrying Place hasn't been used for more than 200 years — but with a view like this, one can imagine why it was so popular. 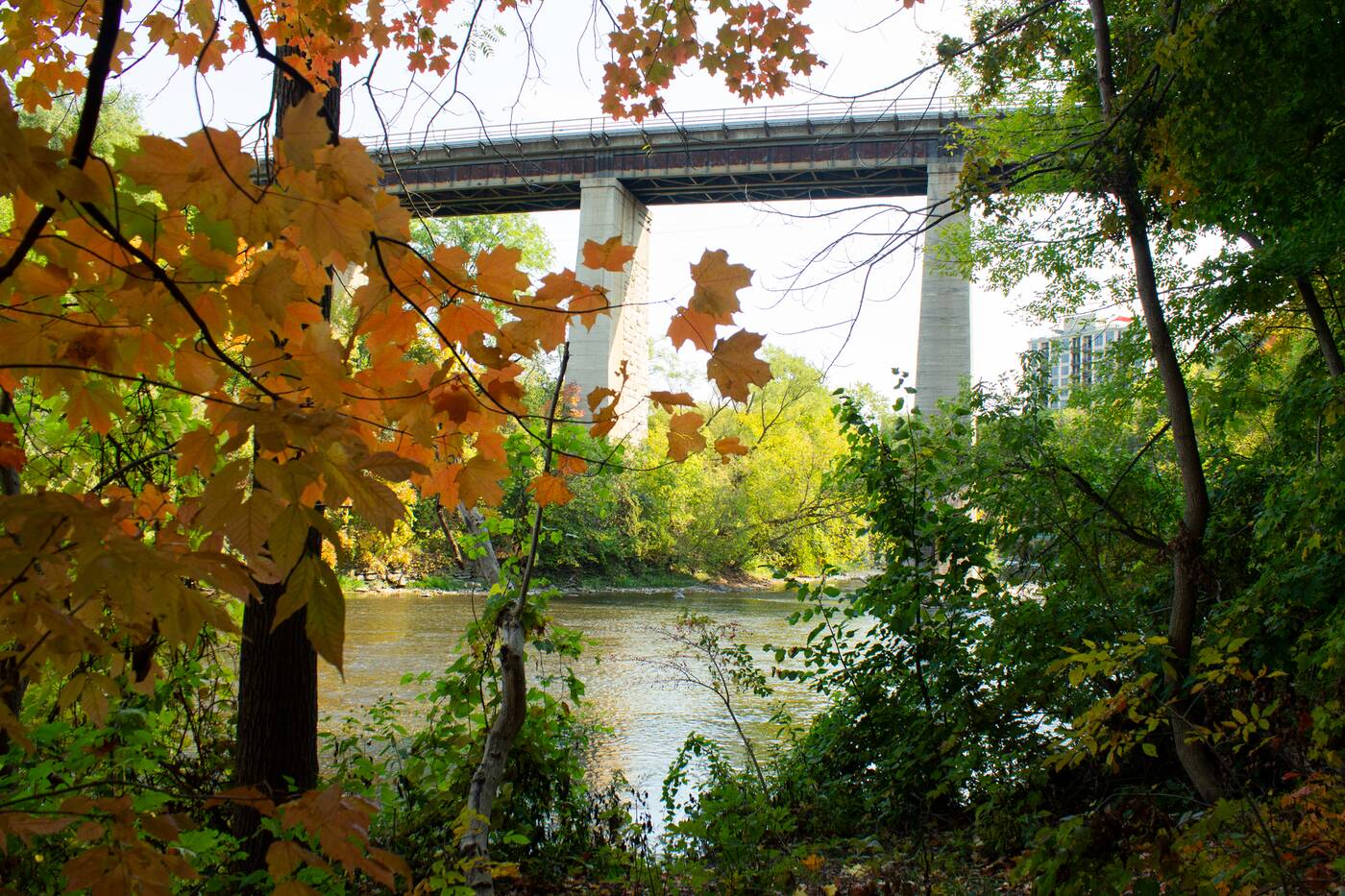 The history of City Dairy in Toronto

The history of the squirrel statues in Toronto

The ghosts of Exhibition Place in Toronto

A miniature version of Canada opens in Toronto next year

Special weather alert in effect for Toronto ahead of major thunderstorm