The history of Bloor West Village in Toronto

Bloor West Village isn’t Toronto's largest neighbourhood by far, but it packs a lot of history into its streets. The strip along Bloor Street from South Kingsway to Ellis Park Road prides itself on being the first Business Improvement Area (BIA) in Canada.

This neighbourhood wasn’t always filled with shops and restaurants though.

Early development of the area began in the late 1800s when the Toronto Suburban Railway (TSR) built a railway that ran through the north end of the West Junction. This led the land surrounding it to be sectioned into individual properties for sale. 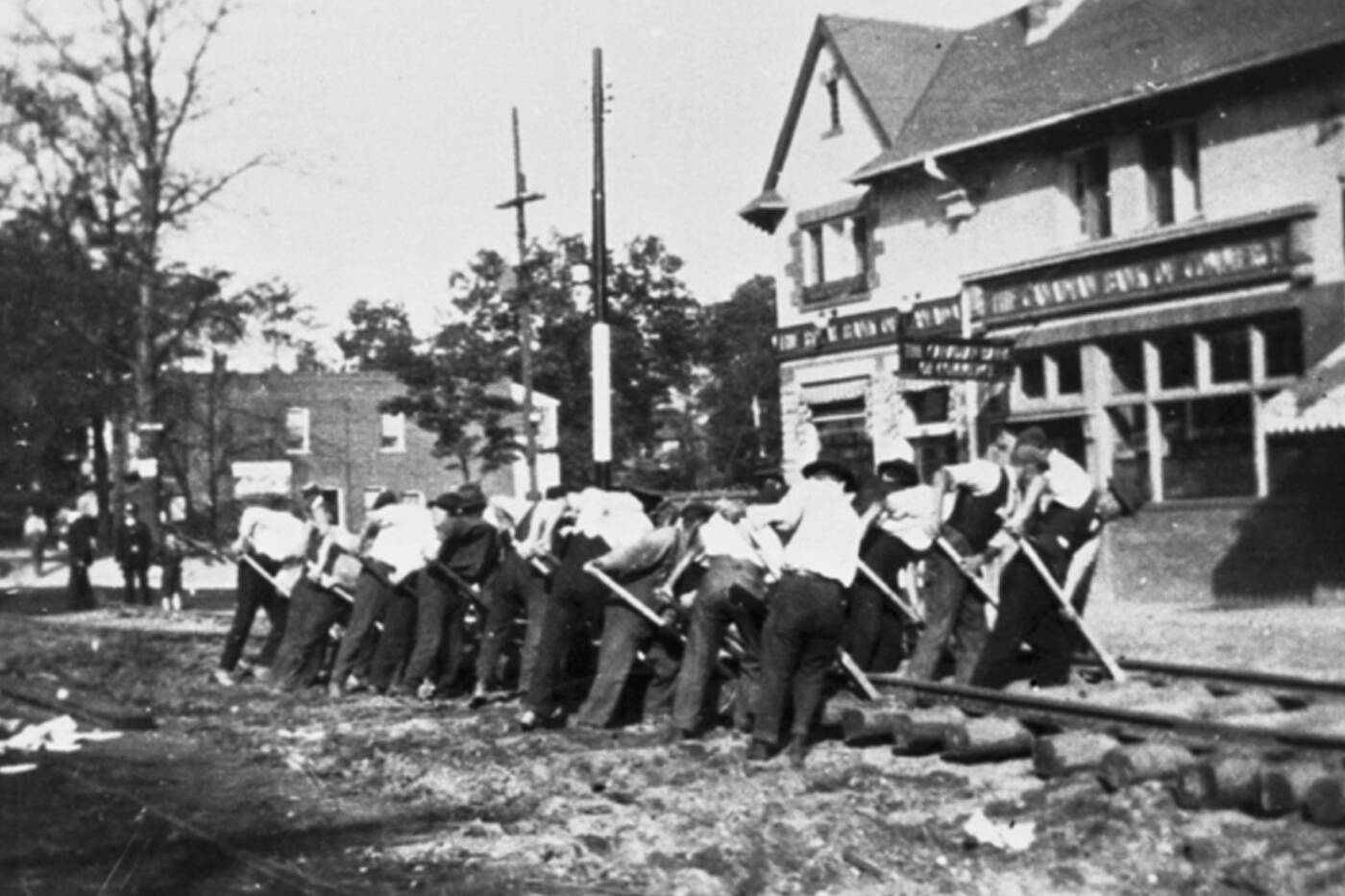 Men laying tracks down at Runnymede Road and Bloor Street in 1917. Photo by City of Toronto Archives.

One of these properties was owned and developed by John Scarlett, a prominent businessman at the time. According to the Bloor West Village Residents Association (BWVRA), he's credited for building Runnymede Road as a road to lead to his estate.

The northern portion of Bloor West Village stands on what was the first commanding officer of the Queens Own Rifles, Lieutenant Colonel William Durie's estate in the 1850s. Named after the Lieutenant Colonel, the present-day Durie Street ran right through his property.

Bloor West Village was greatly influenced by the creation of Bloor Street, which is the main strip of the neighborhood. It was originally a road that connected the east end of Toronto to Paris, Ontario.

Back then it was a very narrow dirt road, with two deep ravines at Keele Street and between Runnymede Road and Quebec Avenue. It was then renamed after Joseph Bloor, a prominent brewer and the founder of Yorkville in the 19th century. 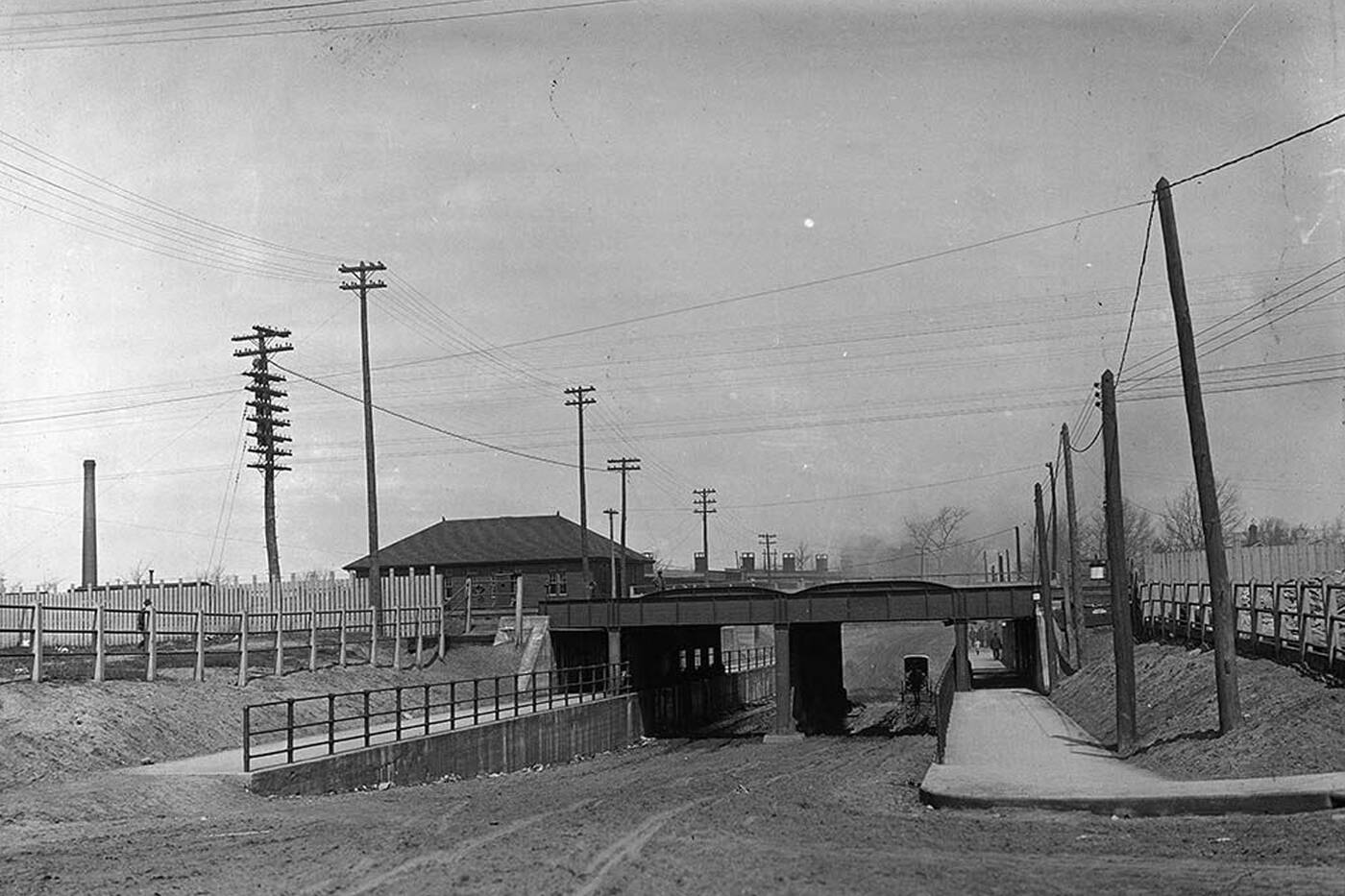 In 1904, West Toronto voted for prohibition to be implemented and Bloor West Village remained a dry neighbourhood until the ban was lifted in 1997. However, years after the implementation it was discovered that the south side of Bloor Street wasn't technically part of West Toronto, meaning that the ban did not apply to any restaurant or institution on the south side of the street.

A major change came for the neighbourhood in 1909 when the City of West Toronto was annexed by the City of Toronto. This meant that Bloor West Village and the Junction could receive city services, which resulted in great economic growth for the area.

In the following years, Bloor West's roads were paved and residential streets began popping up, inviting more families to settle in. Since most of the homes in the area were built in the short period between 1912 and 1923, they are structurally very similar to one another.

Walking through the streets you’ll see deep porches, with the use of a lot of oak, due to the abundance of oak trees that used to grow there. 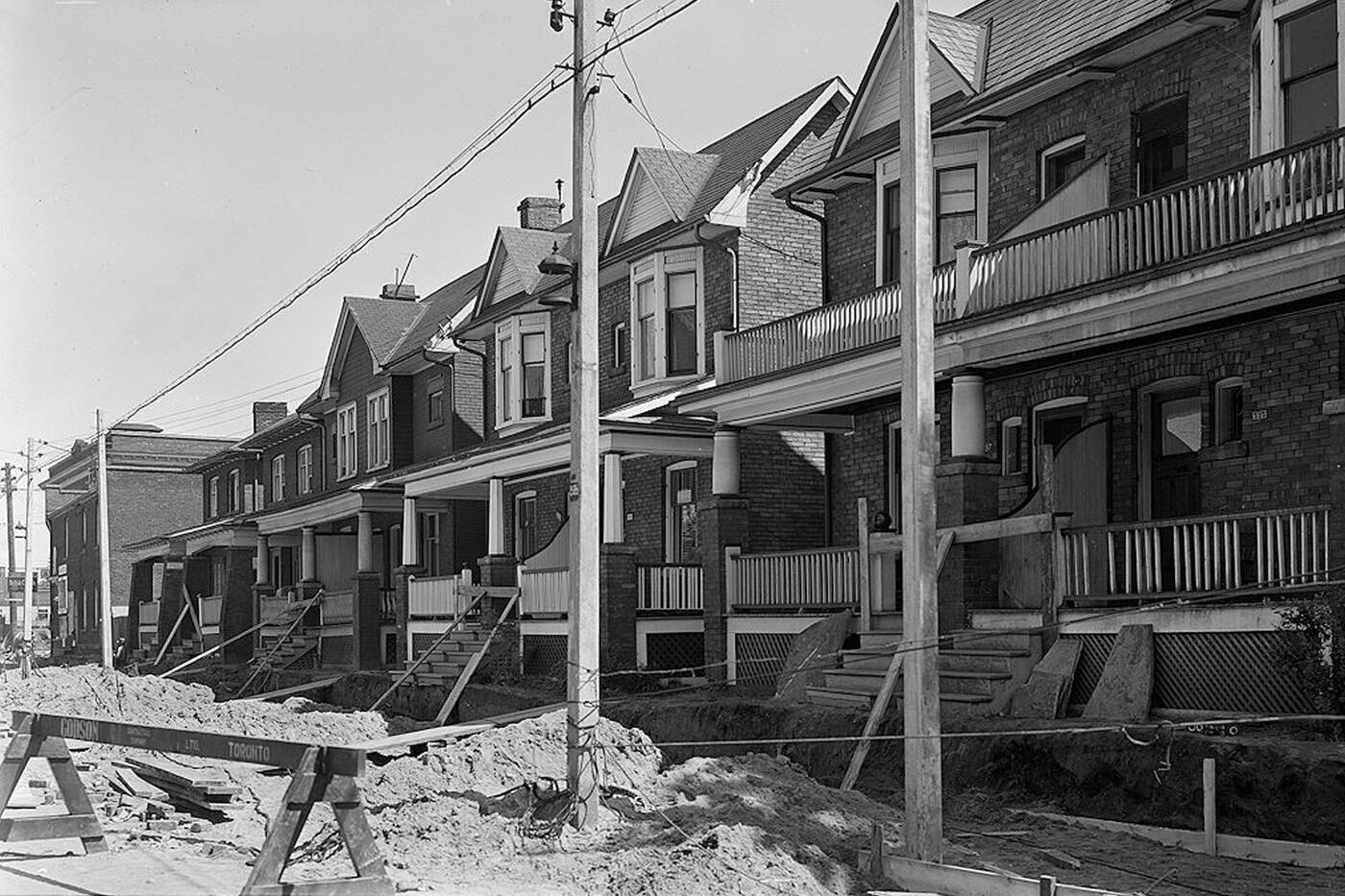 Re-widening Runnymede Road in 1994. Photo by City of Toronto Archives.

In 1914, the Toronto Railway Company and the City of Toronto agreed to build a streetcar line along Bloor Street in hopes of growing the neighborhood even further.

Construction took three years to complete and the streetcar line officially opened in 1917. In 1921, the new Toronto Transit Commission (TTC) extended the line towards Jane Street and named the line Bloor West, according to the BWVRA.

The commercial buildings you see in the area along Bloor Street today were mainly constructed during the 1920s and 1930s. There was a surge in retail, grocery and entertainment businesses in the area, as many of the residents were in the trade industries.

This included the opening of the iconic Runnymede Theatre in 1927. It was built as a vaudeville theatre, in the classical style, the first of its kind in Toronto. Its beautiful interior and live shows brought entertainment to the west end of the city. 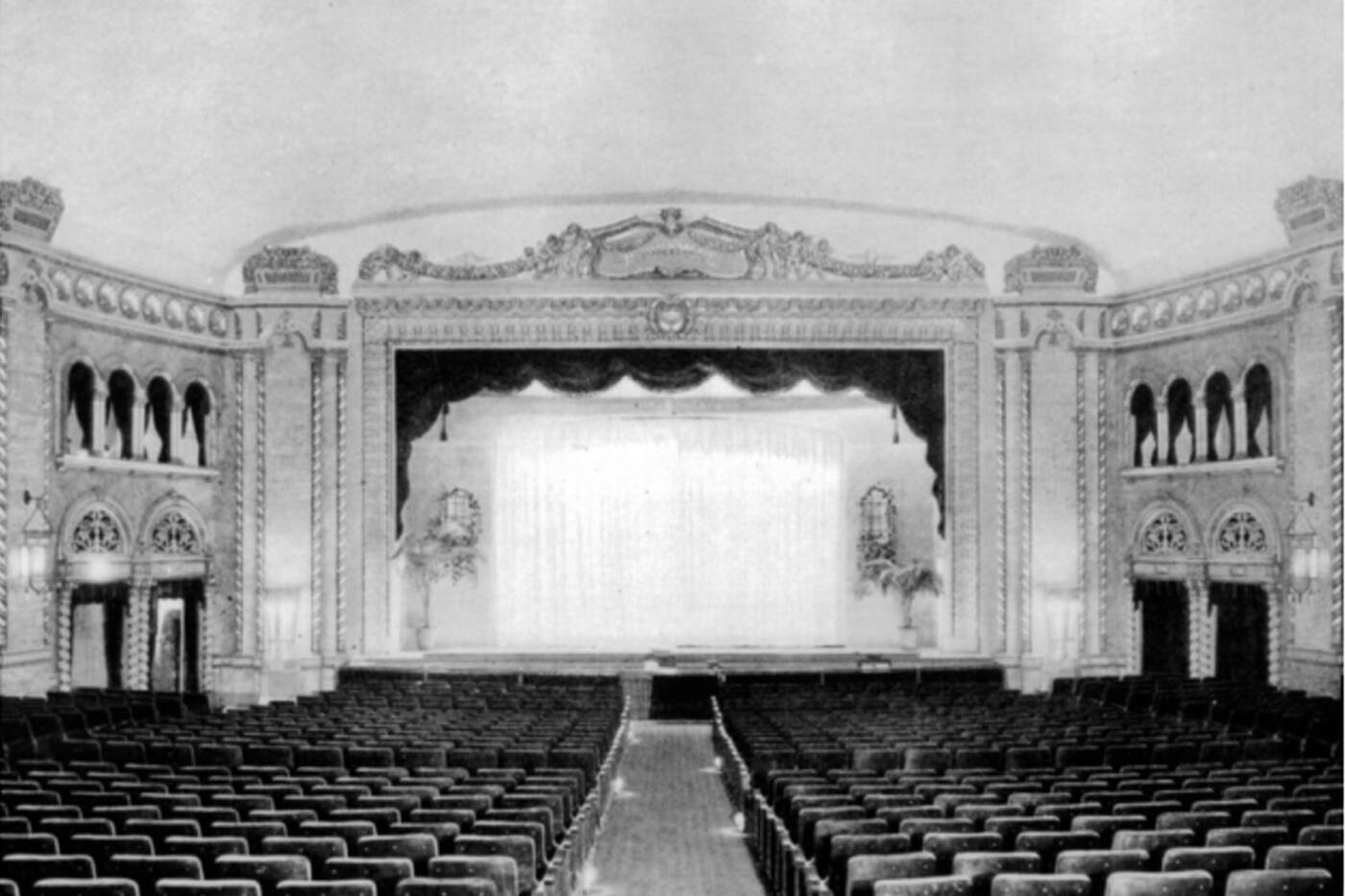 The inside of Runnymede Theatre in 1927. Photo via Swansea Historical Society.

Due to a decline in interest, the theatre converted to a movie theatre in the late 1930s, a bingo hall in the 1970s, a Chapters Bookstore in 1999 and finally the current Shoppers Drug Mart in 2015.

In 2015, the building was given a Heritage Toronto Plaque that recognized its contribution to the city's prosperity.

The newly renovated Runnymede Public library was opened on Nov. 12, 1930. This was after the Toronto City Council granted the Toronto Public Library $100,000 to provide new branches two years prior. 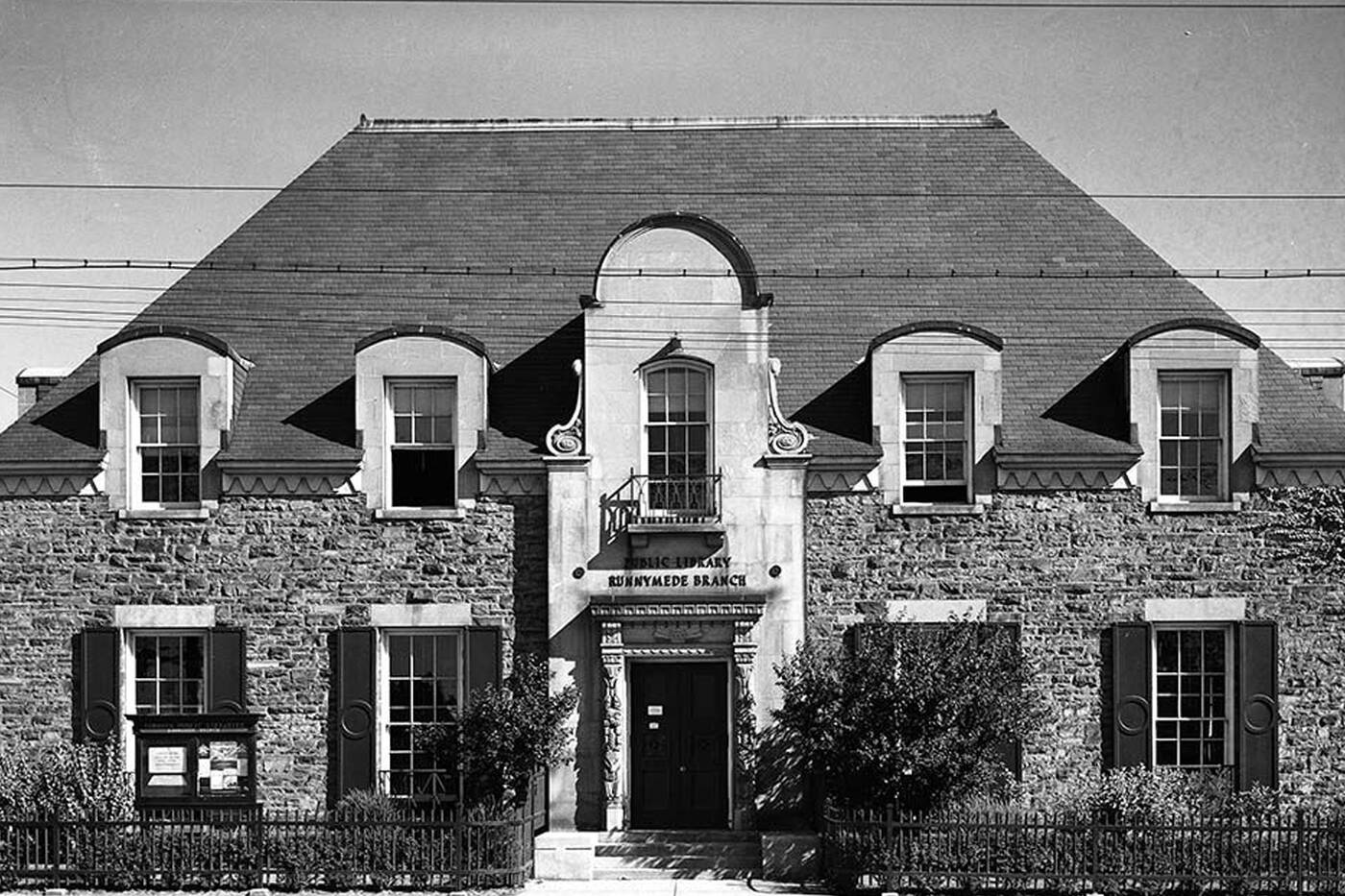 Runnymede Public Library in 1930. Photo by City of Toronto Archives. 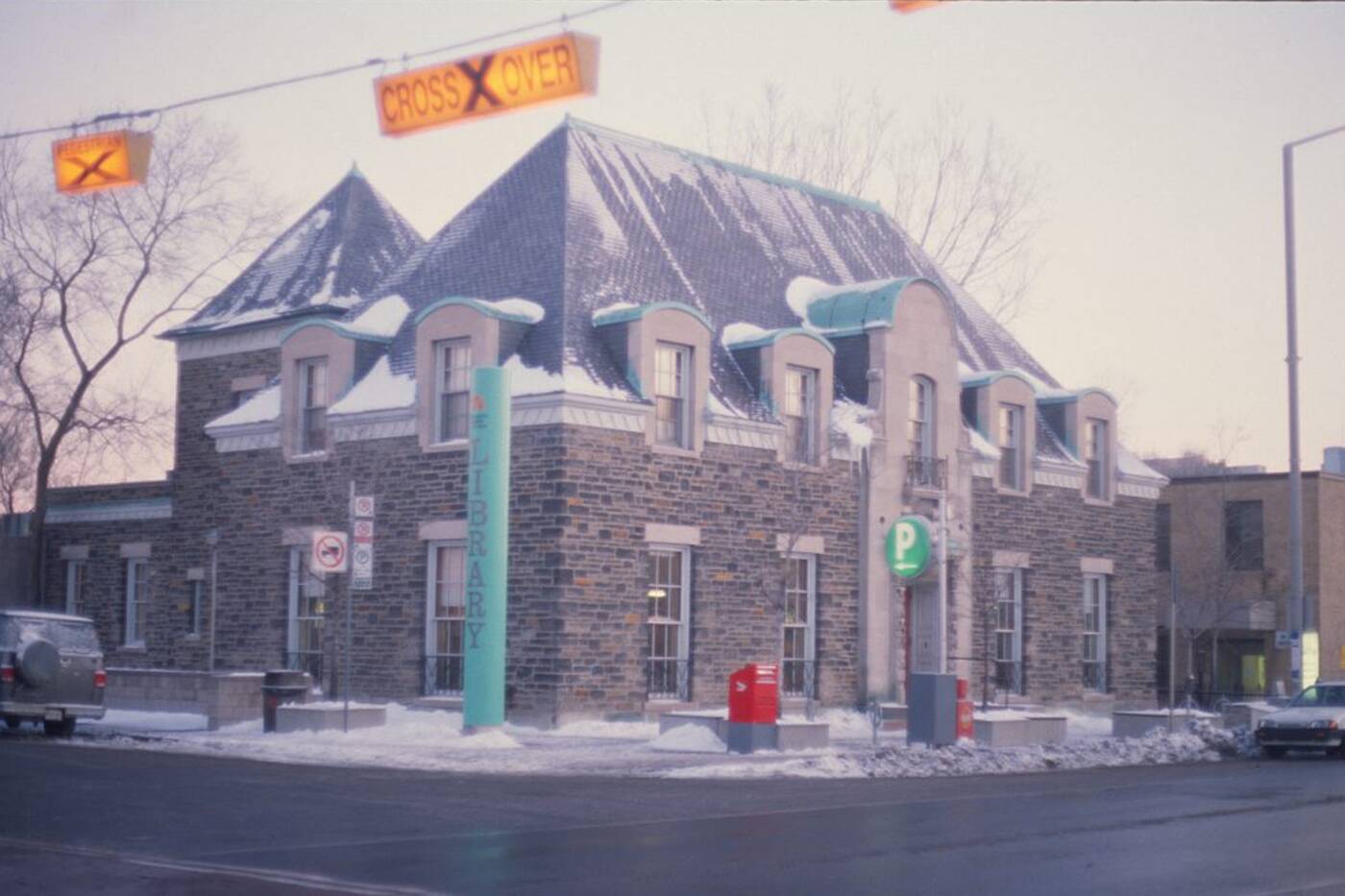 Runnymede Public Library in the 1990s. Photo by City of Toronto Archives.

During and post WWII, Eastern Europeans were settling in Bloor West Village, many of whom were Ukrainian. After the opening of a few Ukrainian businesses, more Ukrainians were naturally drawn to the area.

In 1995, Toronto was twinned with Kyiv, Ukraine, and to mark the occasion the Bloor West Village Ukrainian Festival was established. The annual three-day festival now hosts more than 500,000 guests making it North America's largest Ukrainian festival. 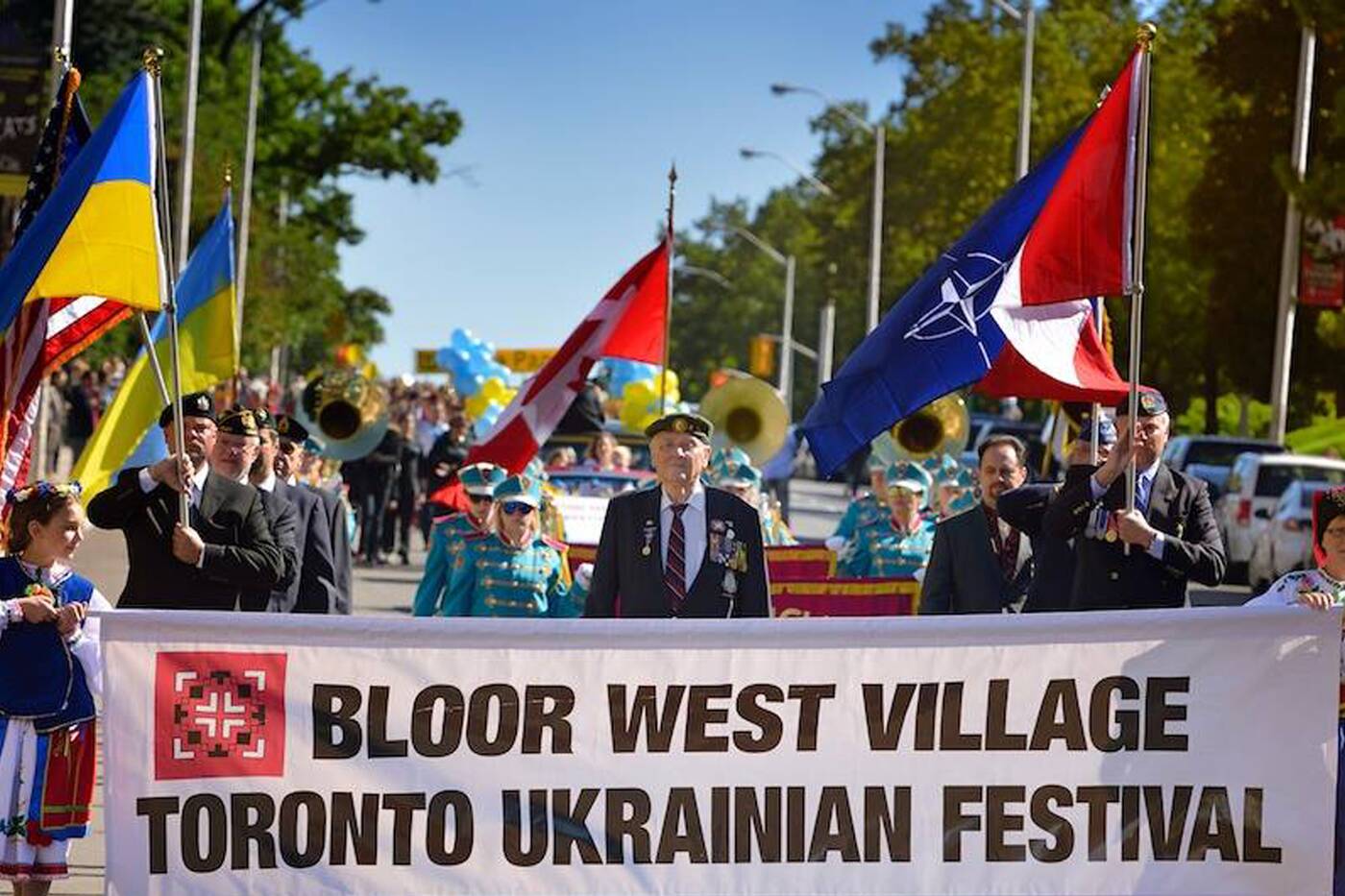 The settlement of the Ukrainian community had a huge impact on the development of business, entertainment and culture in the neighborhood, but one of the biggest changes was yet to come.

In 1967 when the Bloor-Danforth subway line was completed, businesses in the area were noticing a huge decline in shoppers. Now that people were traveling underground, foot traffic greatly diminished.

This, along with the addition of suburban shopping centres, forced many local shops out of business.

According to Bloor West Village BIA, this led a group of west-end businessmen to seek legislation to allow businesses to pay a levy in exchange for the revitalization of the area through physical and promotional improvements.

Little did they know that they were pioneering the first BIA in Canada, a model that would later be used around the world.

They added lighting to the trees, colourful flower boxes and benches outside of establishments. The improvements were such a success that the neighborhood saw a large influx of shoppers.

In 1980, Alex Ling, the late chair of the Bloor West Village BIA, founded the Toronto Association of Business Improvement Areas, and thanks to it Toronto now has 83 BIAs across the city.

Ling spent 24 years as the chairman of Bloor West Village BIA and played a pivotal role in its development.

Over the past decade, the Bloor West Village has hosted the Bloor West Street Fest, Halloween Festival and participates in the Cavalcade of Lights. It has gained a reputation for its abundance of bakeries, cafes and markets.

Despite local businesses being replaced by bigger chains in the late 2000s and early 2010s, the neighbourhood managed to preserve many favourites. 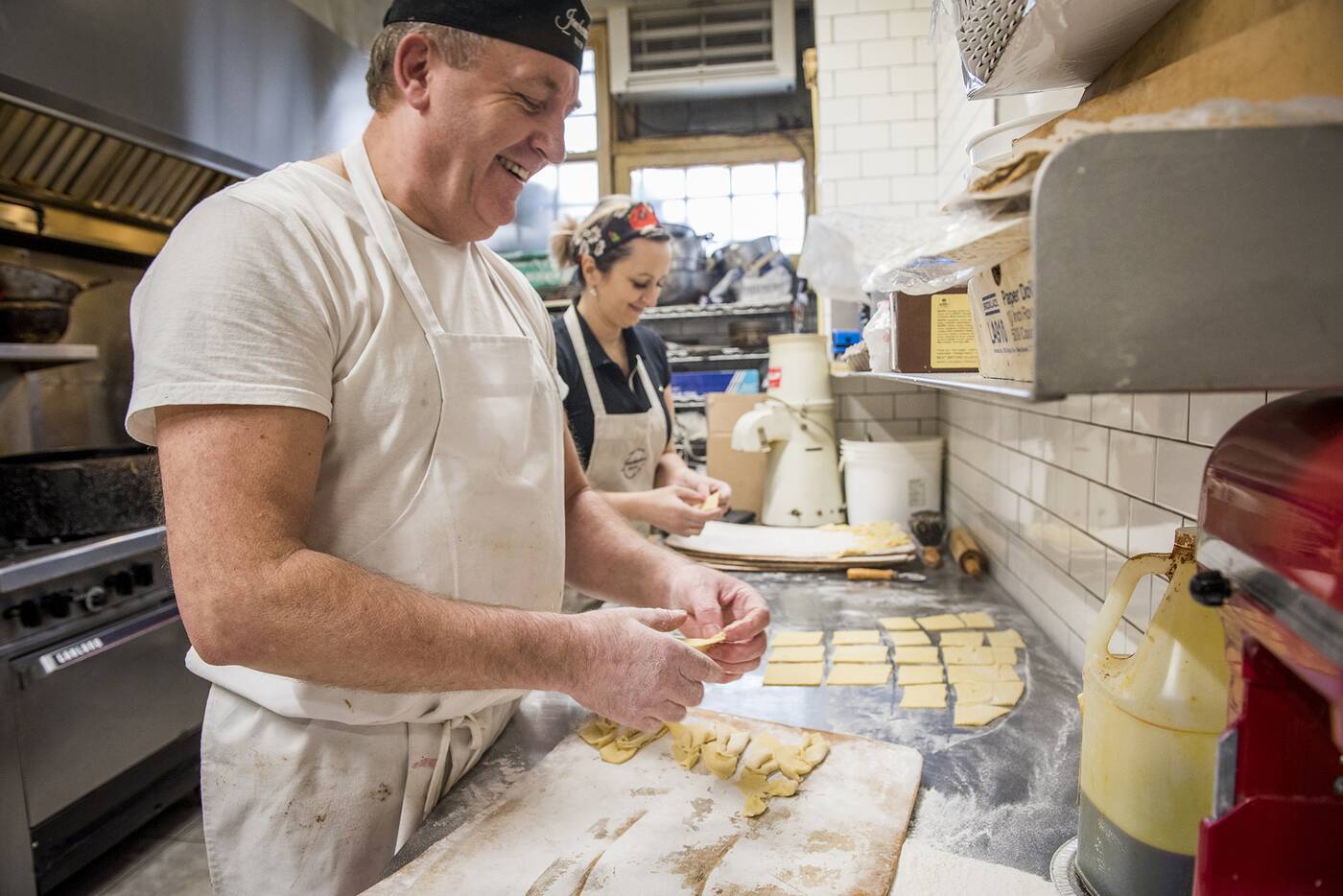 In the kitchen at Janchenko Bakery. Photo by Hector Vasquez.

If you’re in the neighbourhood, Janchenko Bakery specializes in homemade Eastern European cuisine and is truly a must-visit.

The City of Toronto had opened a study to designate Bloor West Village as a Heritage Conservation District, but on July 29, 2020, the Head of Heritage Planning from the City of Toronto announced that they were not going to proceed with the designation.