The City of Toronto has been working on a plan to completely overhaul downtown Yonge Street from Queen to College/Carlton, and the recommended design was just released to the public for feedback.

The project, titled YongeTOmorrow, aims to increase pedestrian space along the stretch and improve the way people experience it.

The watermain beneath Yonge Street will also soon need replacing, so this construction will provide an opportunity to implement a new street design to better serve road users.

The Recommended Design Concept for #YongeTOmorrow is now live and ready for your feedback. The plan offers a significant improvement to the status quo, including wider sidewalks, cycling facilities, and a pedestrianized zone at Yonge-Dundas Square. #WalkTO https://t.co/M1xsOo6UwF pic.twitter.com/2s7FptCAm0

Back in November of 2019, the city released three different possible solutions for this downtown stretch: two car lanes, one car lane or no car lanes during the day.

The recommended design concept has since been released, and it includes pedestrian priority zones with one-way driving access (Gerrard Street to Walton Street and Elm Street to Edward Street) as well as cycle tracks from College Street to Gerrard Street. 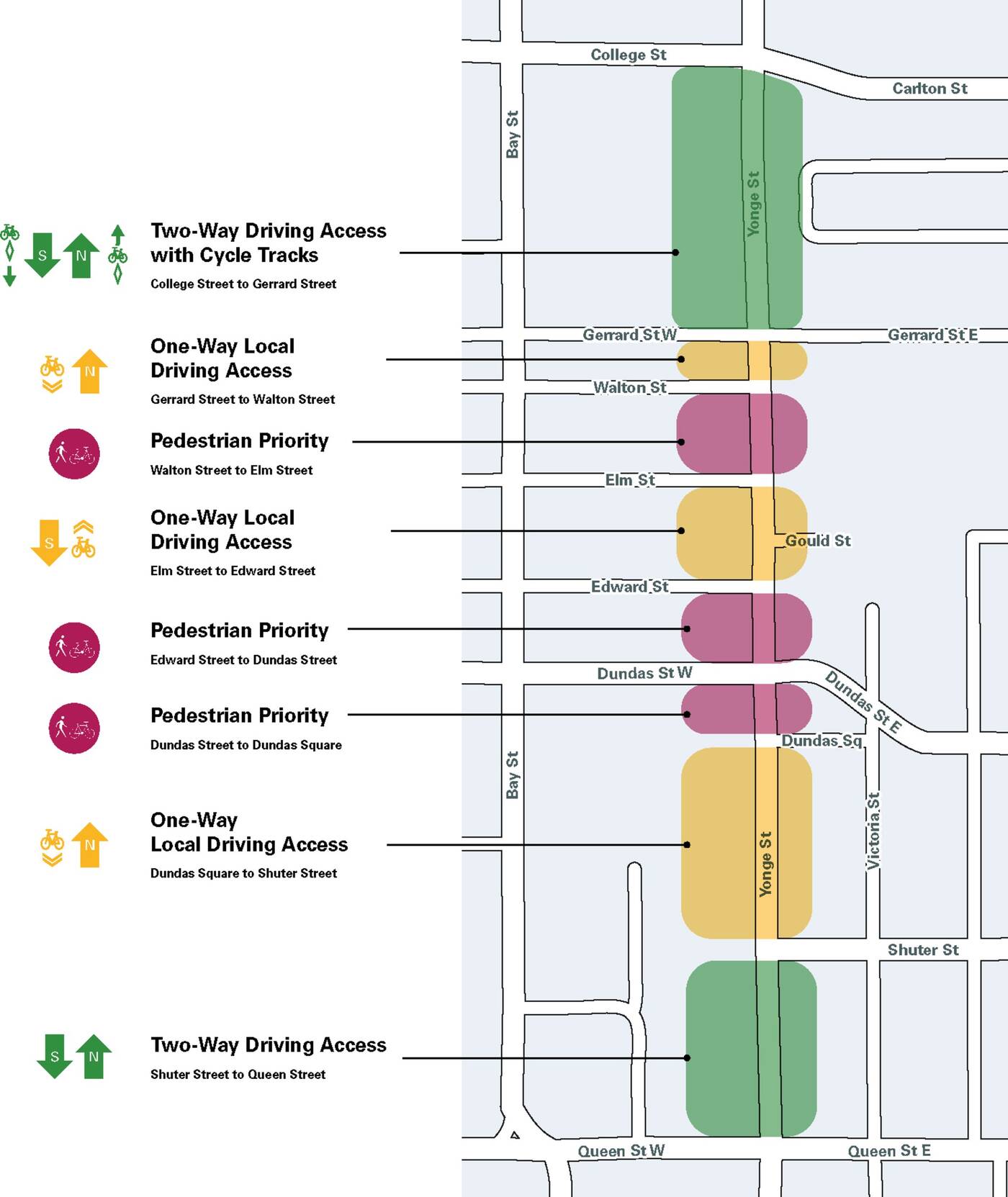 The proposal recommends these driving restrictions for certain blocks from 6 a.m. to 1 a.m., but there would also be two-way driving access for buses, cars and trucks on all blocks overnight. 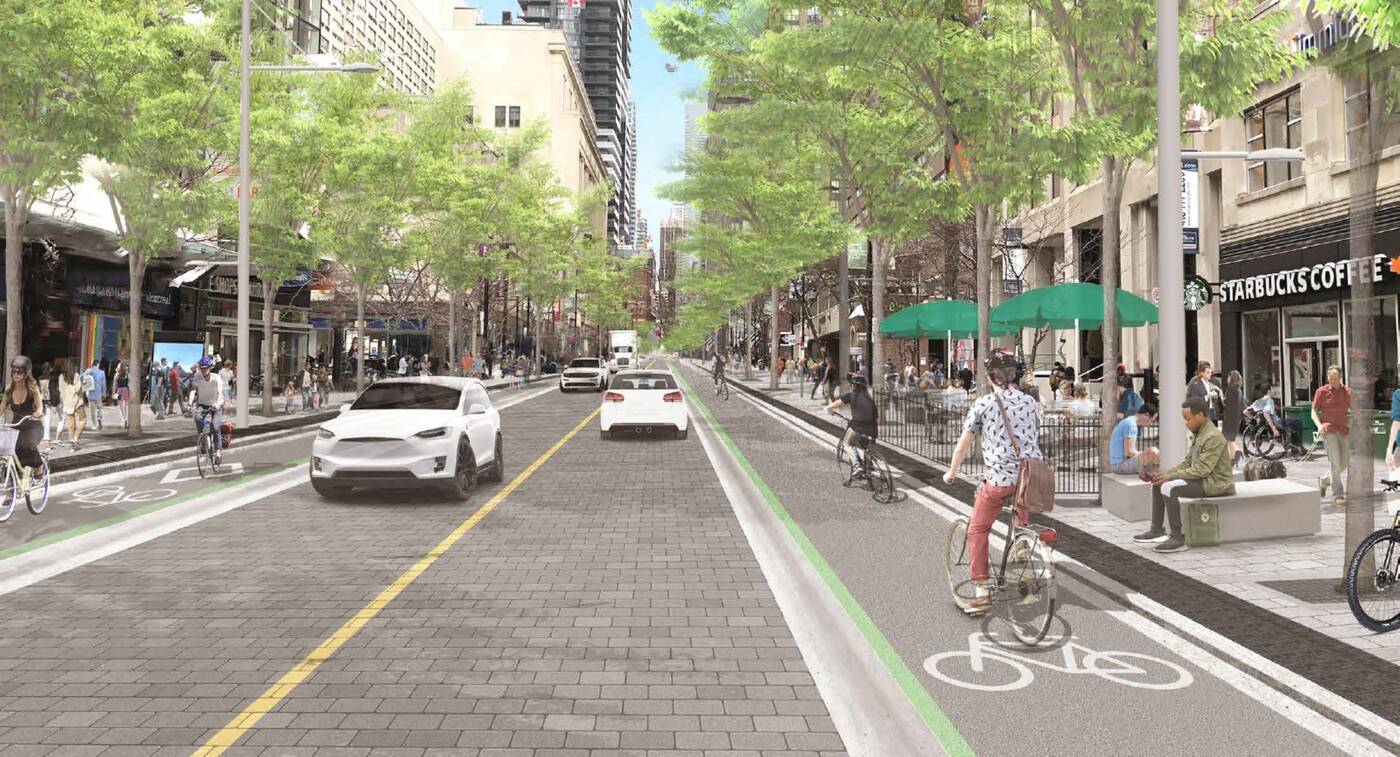 The plan also includes a cycle track on University Avenue from College Street to Adelaide Street. 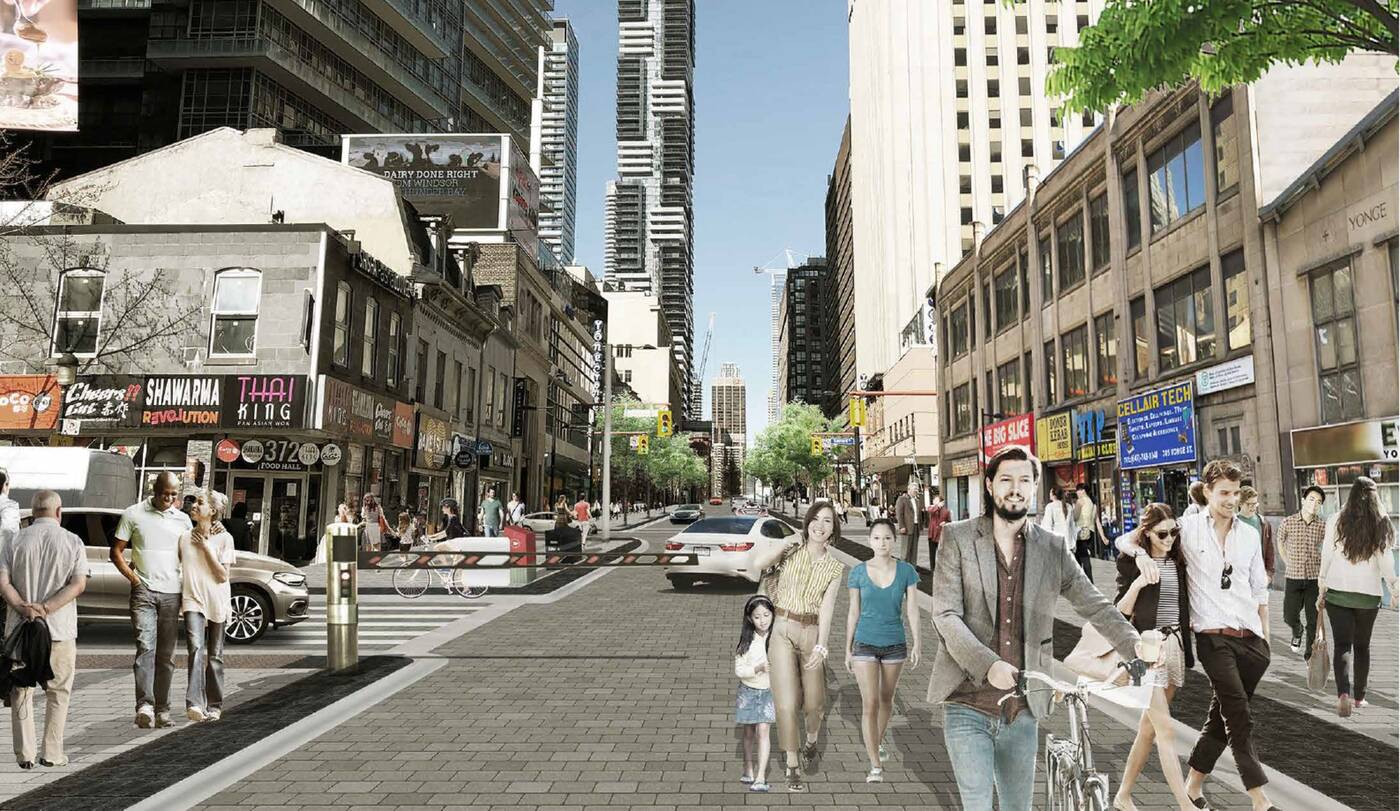 Wider sidewalks and furnishing zones to support cafes, planting and seating are likewise being proposed for the stretch, and Yonge-Dundas Square would see the creation of a pedestrian-priority zone. 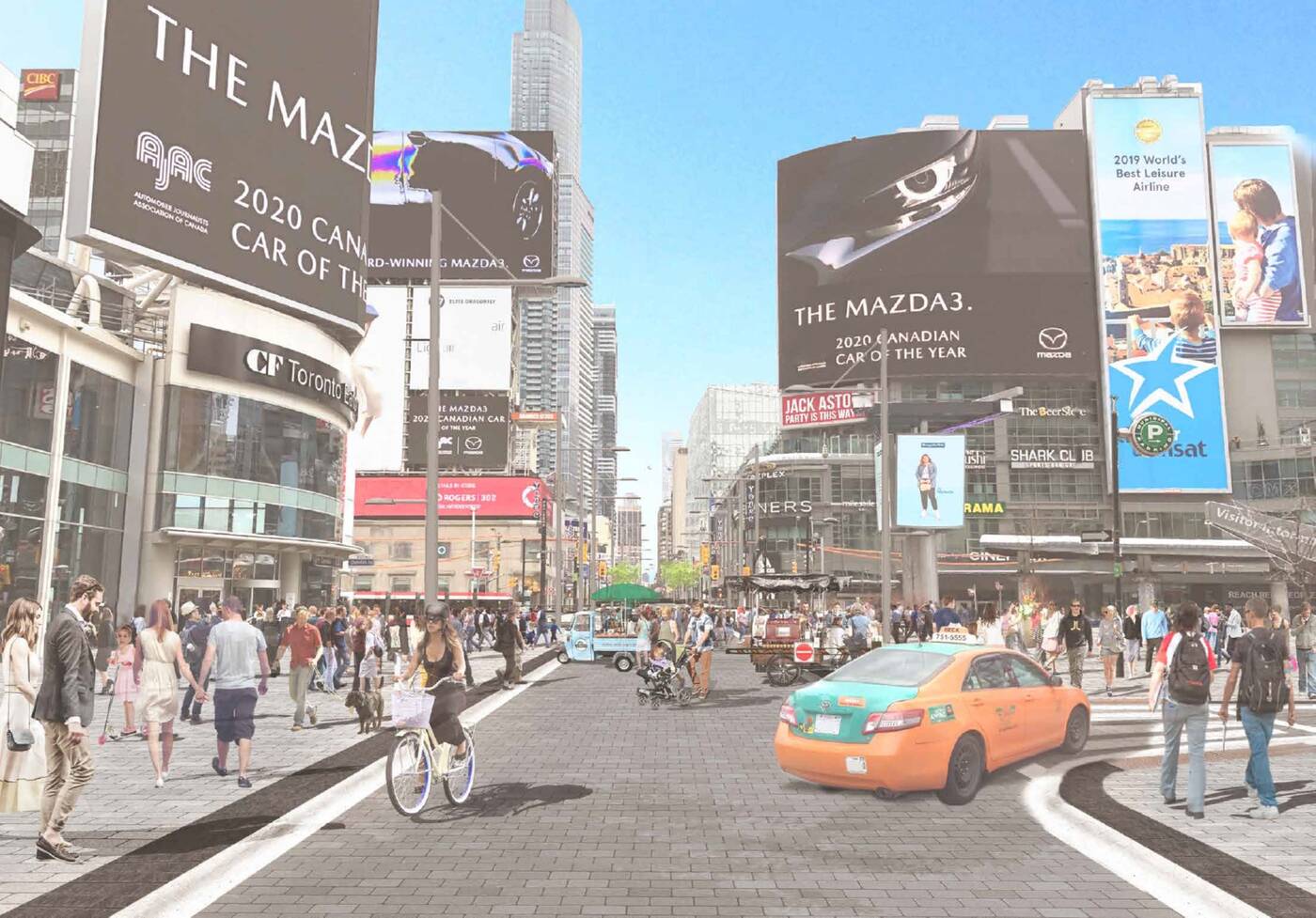 Rendering of Yonge Street at Yonge and Dundas Square 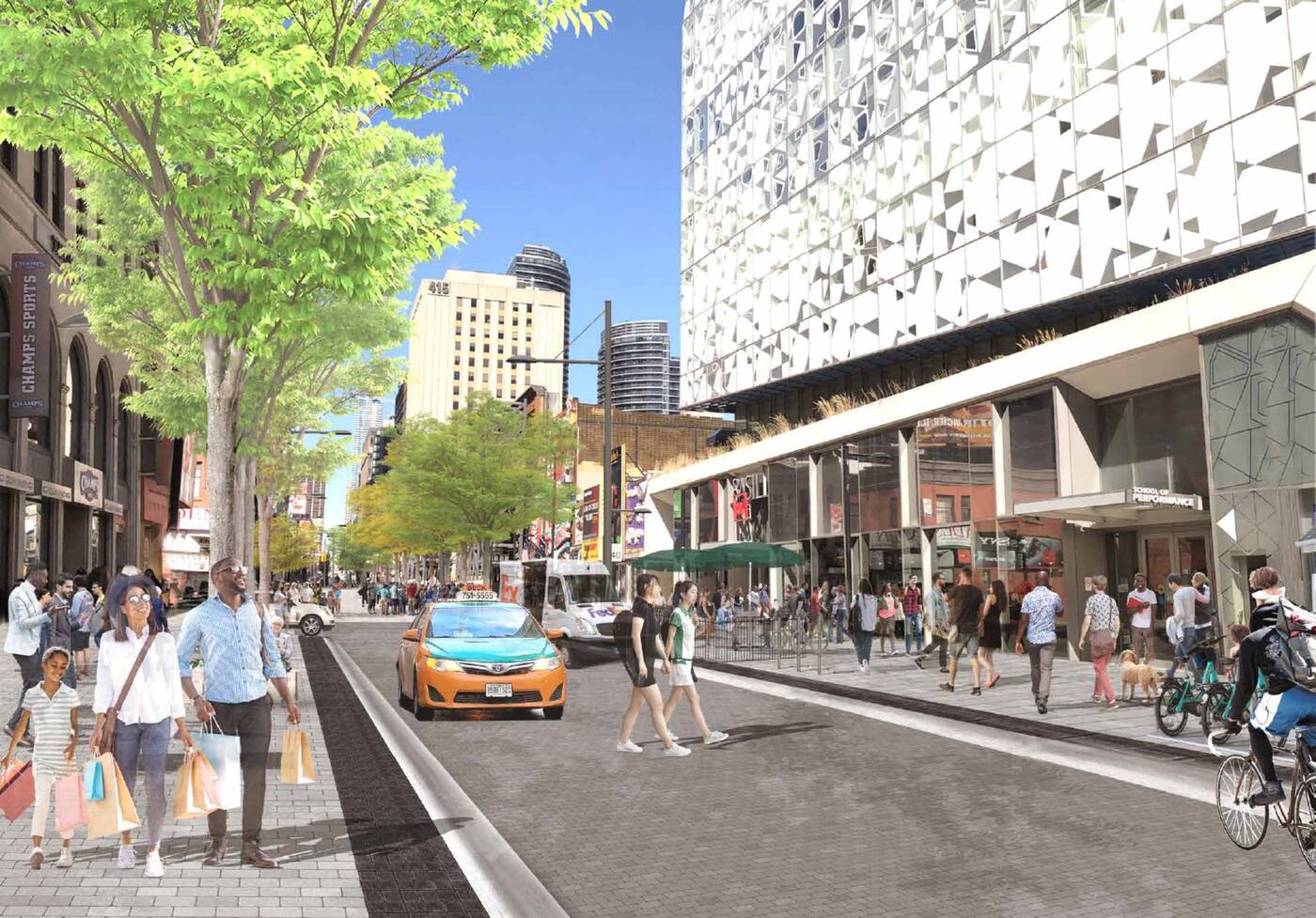 It's worth noting that the newly released renderings were created before COVID-19 struck Toronto, and they're meant to illustrate recommendations for Yonge Street in a post-pandemic future. 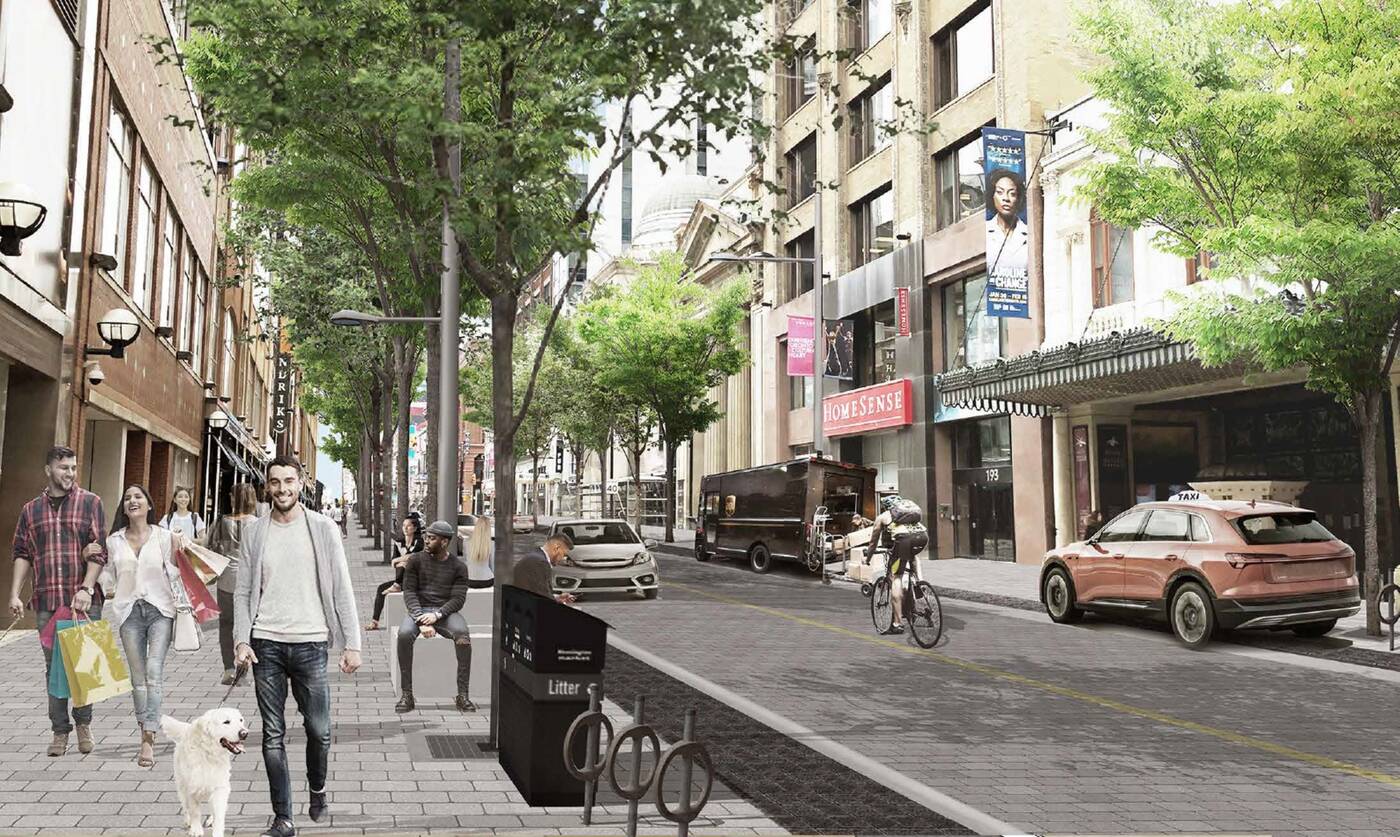 More details about the proposed plan are available to the public online, and anyone interested in providing feedback on the recommended design can register for the Public Event being held virtually on Wednesday, Sept. 16 and complete the online questionnaire by Sept. 30.

Following the consultations, city staff will review the feedback before reporting to city council in December 2020.

The recommended timeline for the project would see the detailed design completed in 2021-2022, with construction taking place between 2023 and 2025.

"The status quo on Downtown Yonge Street is completely unacceptable," wrote active transportation advocate Sean Marshall of the plan on Twitter. "These changes will make Yonge a more welcoming street for all."