Richard Costello has been a deltiologist — a person who collects postcards as a hobby — for almost 20 years. But Costello actually started collecting by mistake.

"Twenty years ago when eBay was fairly new, I was trying to buy an antique online and I had to verify my address. So I thought I'd buy something small, " he explained.

He ended up buying a group of 30 postcards.

"When I got them they were Toronto postcards and I found them really fascinating."

He's now amassed more than 5,000 Toronto postcards, 500 of which are just of the Canadian National Exhibition (CNE).

One of his favourite cards is a postcard one from an early Toronto Industrial Exhibition (the precursor to the CNE). 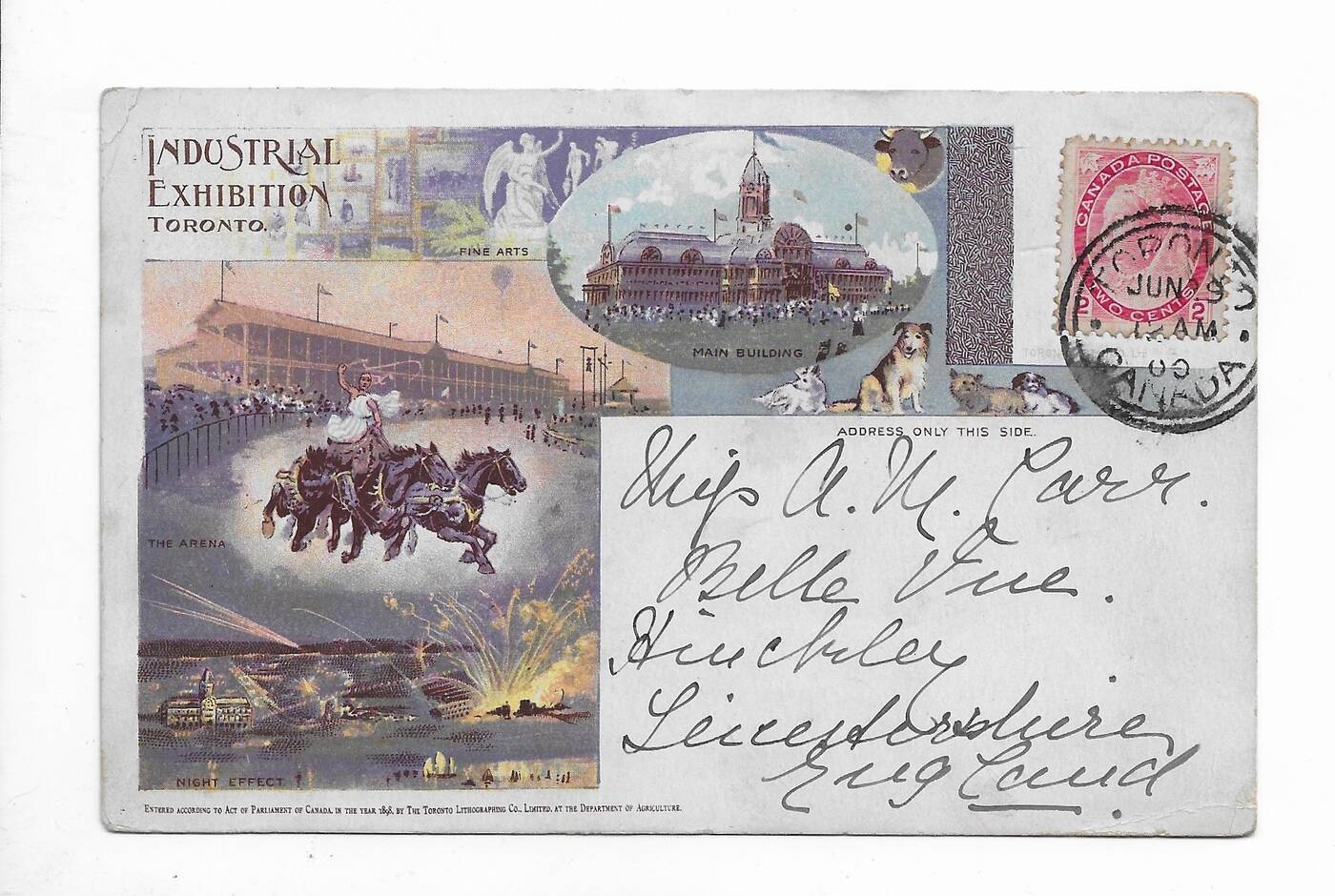 A postcard from the Industrial Exhibition.

"It’s made by the Toronto Lithograph Company, famous for their innovative use of colour on early cards, and is postmarked 1900 with a Queen Victoria stamp. Note that the front can only be used for the address, an early post office requirement."

Costello finds most of his postcards on eBay or at postcard shows across the province. And while his collection is vast, he's still searching for any he doesn't have or those extremely rare or scarce postcards — mostly cards that weren't very popular.

"The more boring the postcard is the scarcer it is. Nobody buys the picture of the street with no houses," he explained.

There are some other things that can increase the value of a postcard, according to Costello. For example, if the card has been mailed to a far away location, such as Japan, it's considered more valuable. It can also be worth more depending on the type of stamp that's been used.

And while Costello doesn't have many cards that have 'gotten away' there is one he'd do almost anything for.

"It's called the administration building at the CNE. It's number 28 in the series. I would just about kill for that, " he said.

It's a picture of the administration building at the exhibition in 1907 and the only time he's seen it is in Toronto Exhibition Place archives.

He'd actually made a bargain with the archivist there to acquire it. Trading them postcards they didn't have in their collection for the card but when he went back to go get it the card had been stolen.

"It's been 18 years and I've never seen it again. The only reason I know it exists is because I held it in my hands otherwise I would think I was crazy," Costello told blogTO. "It's the Holy Grail. I would pay just about anything to get it."

Even without that elusive card Costello still has plenty of old postcards to share stories about. 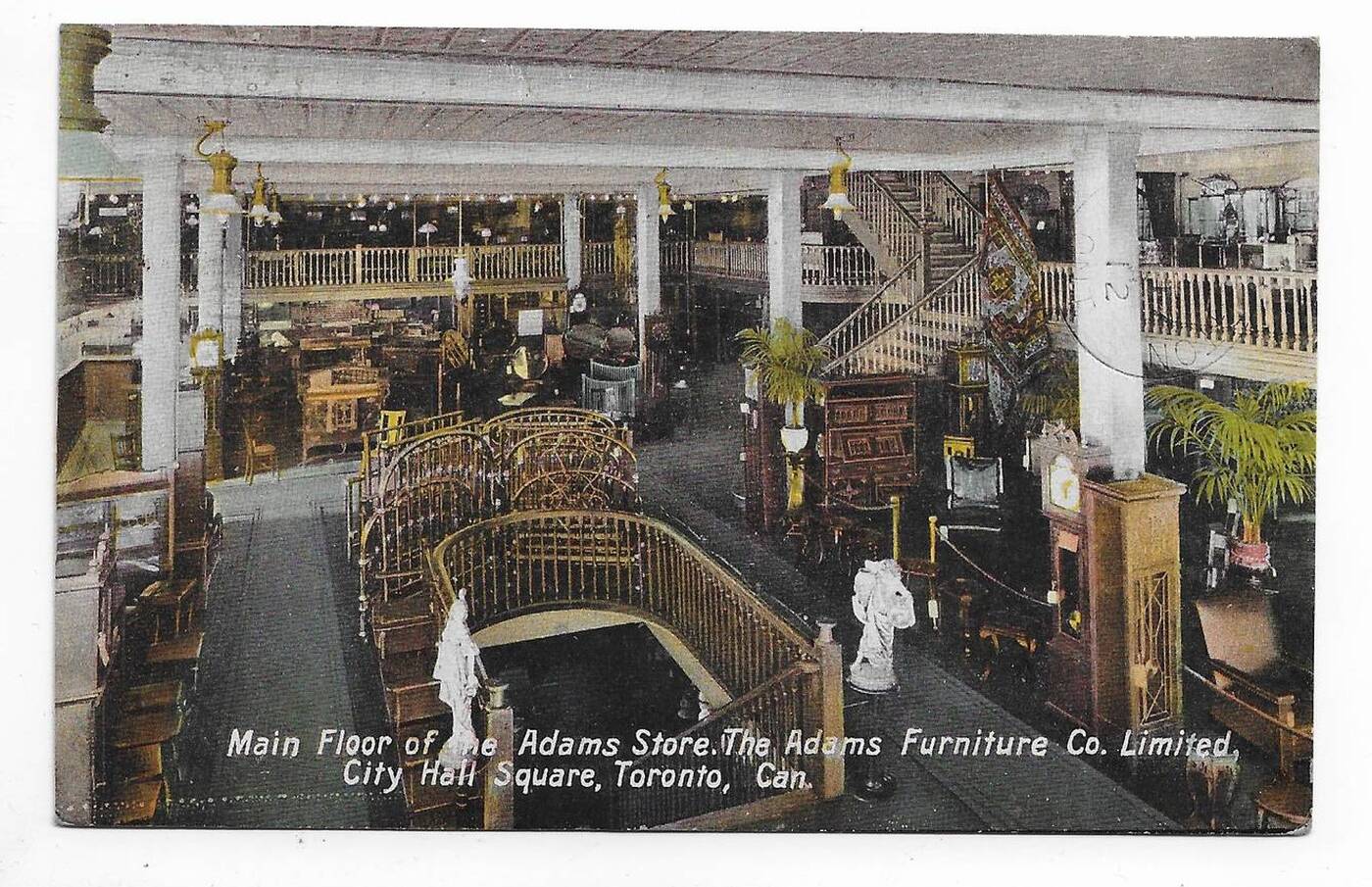 The postcard for The Adams Furniture Co.

One of them is Adams Furniture, one of Eaton's competitors, that was once located at City Hall Square. The store's very ornate decoration included palm trees, which were popular at the time. 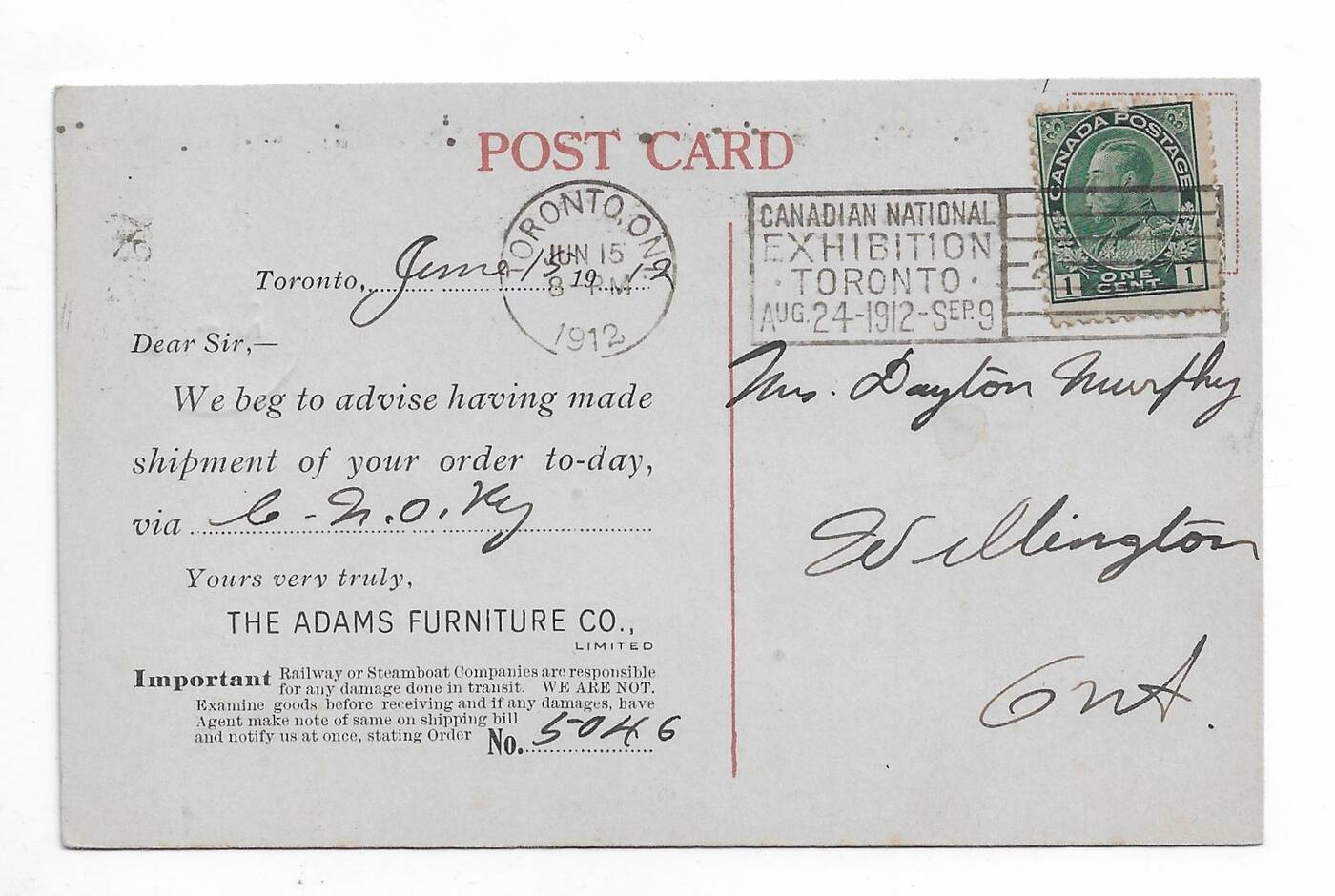 The back of Adams Furniture postcard.

The Adams Furniture postcard is actually an example of one used by the company to communicate with customers.  The back of the card informs the receiver that their order has been sent. 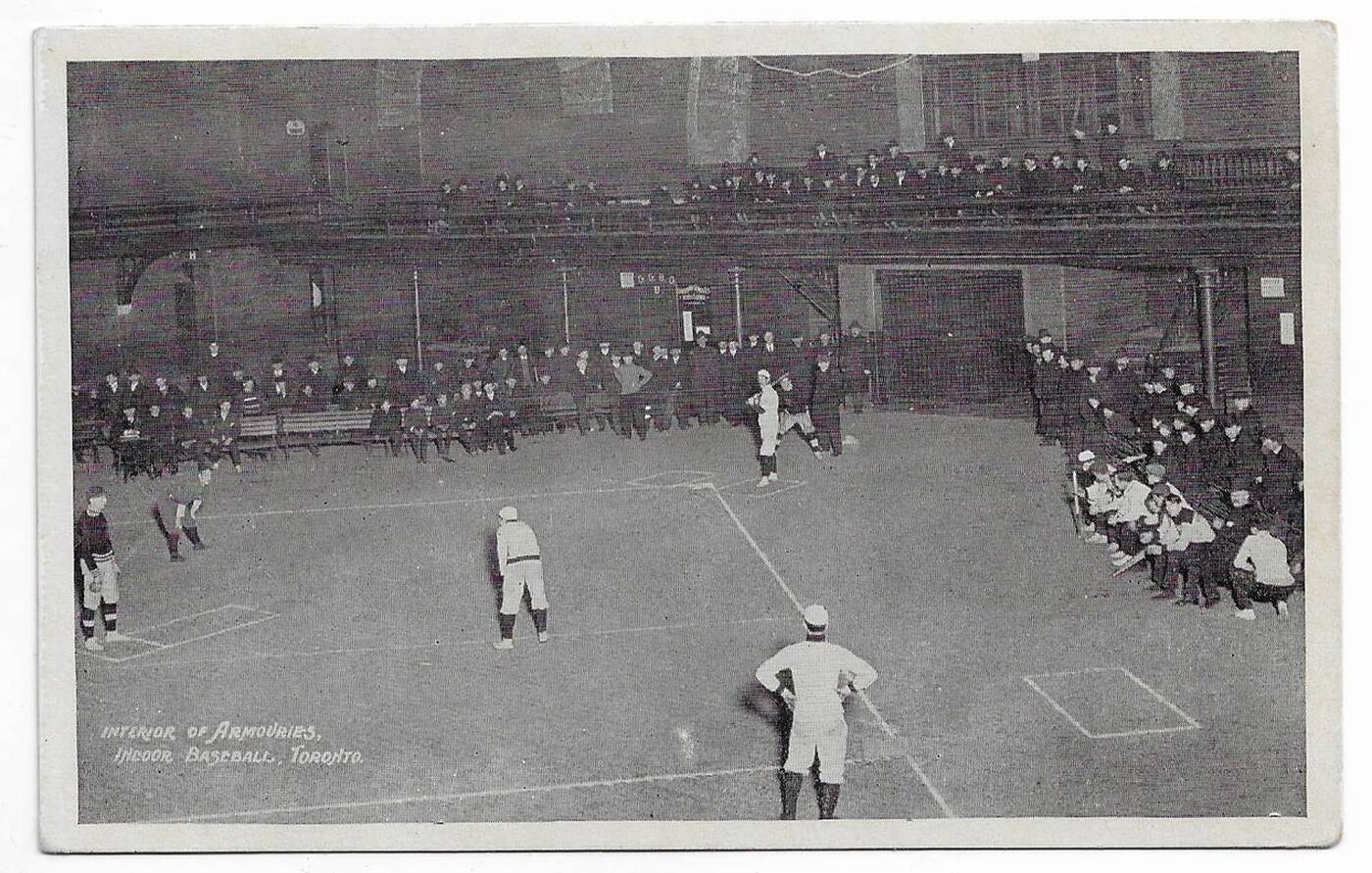 This postcard shows how people used to play baseball indoors at the Toronto Armouries.

Another card shows people in Toronto playing indoor baseball, something unheard of in the city today unless you're in a domed stadium like the Rogers Centre.

The Toronto Armouries on University Avenue north of Queen was the only building in the city at the time large and tall enough to fit a (downsized) baseball diamond. This is a very rare card. 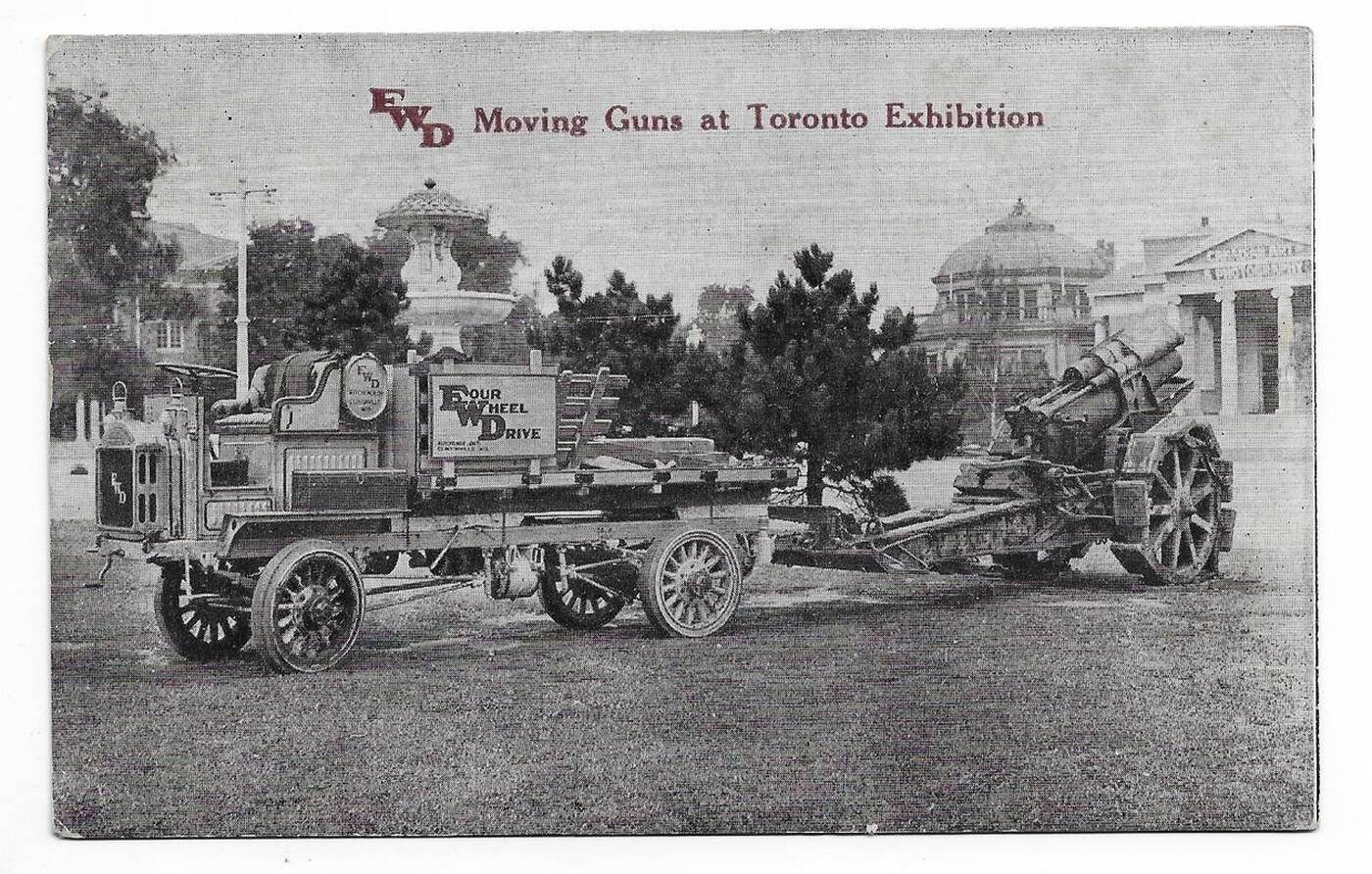 This postcard from 1919 shows how F.W.D. vehicles were used to transport guns fom the Great War.

A postcard from the Ex dating back to This time it's 1919 is also a favourite of Costello because it shows the efforts made to re-purpose First World War war machines. 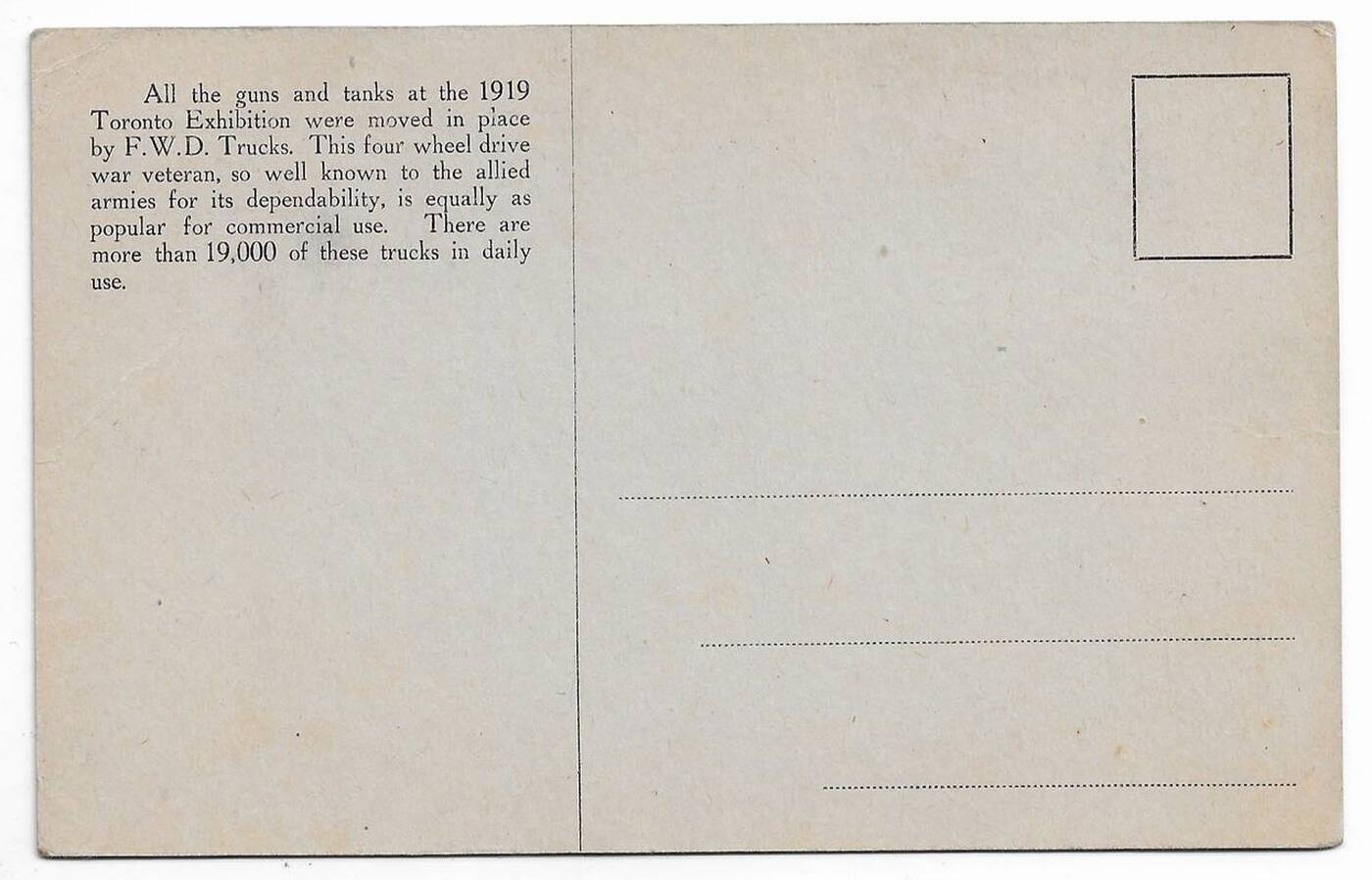 The back of the FWD postcard.

The back of the postcard explains that the F.W.D. trucks were “well known to allied armies for dependability” and were “equally as popular for commercial use.”

The postcard plays on patriotic feelings which remained after the war ended. These cards were likely given out for free at the F.W.D. booth at the Ex. 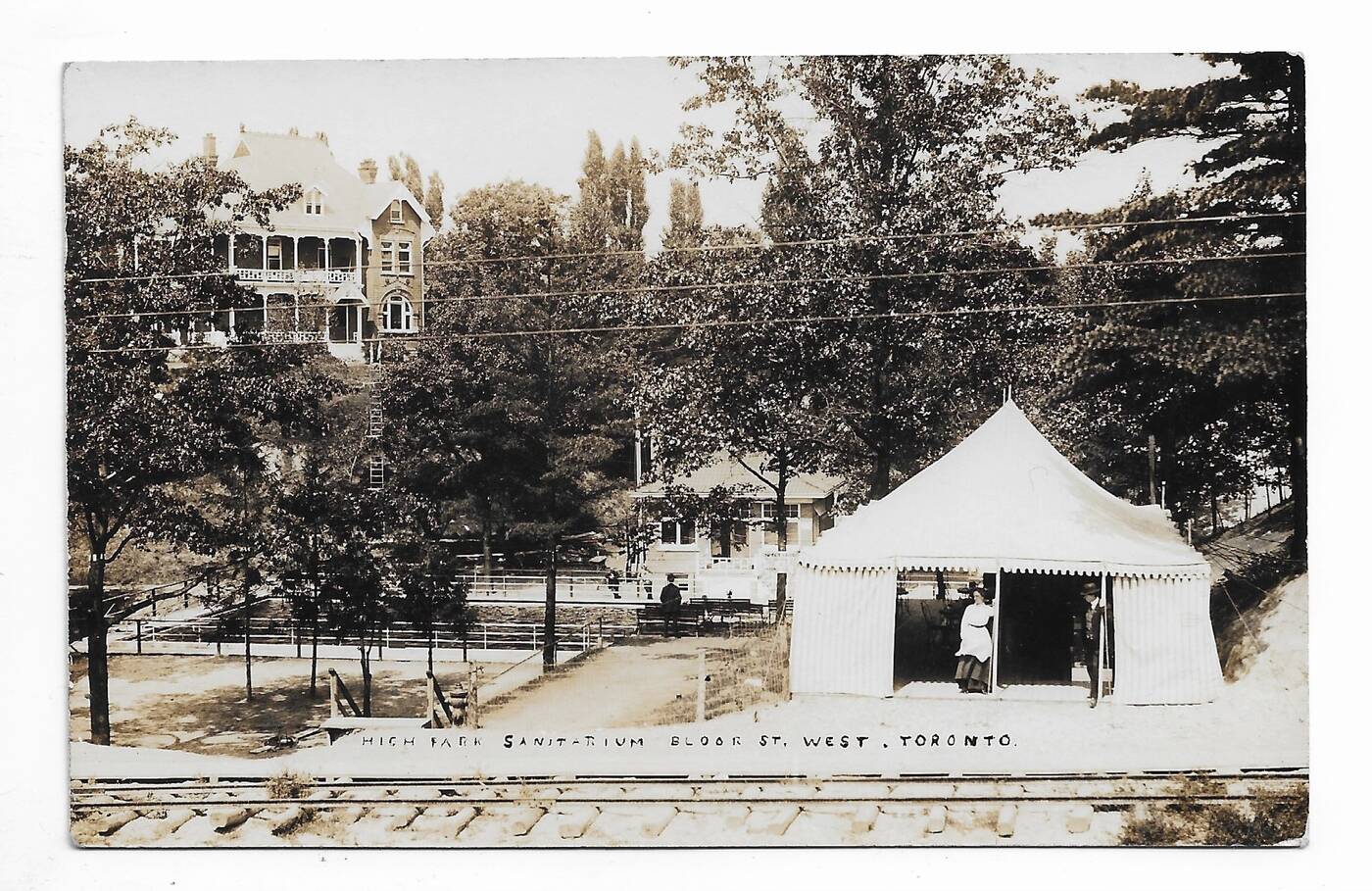 Postcard of the High Park Sanitarium.

One of Costello's favourite subjects is the mineral baths at the High Park Sanitarium. This is his current favourite card because it’s the most recent.

It shows a woman waiting for the Bloor Street streetcar in a tent provided by the sanitarium (the large building on the hill at upper left), with the words “mineral bath” (i.e. swimming pool) behind her.

It's a fine example of what’s called a “real photo”, which became popular with the improvement of photography technology. You could take a picture and send it to be developed — in this case by Kodak — and they would send your camera back reloaded. Costello's earliest postcard dates back to 1899.

Costello's earliest card is postmarked 1899. It plays on the patriotic feelings toward the Empire aroused by the Boer War but it was also used to sell the company’s product. 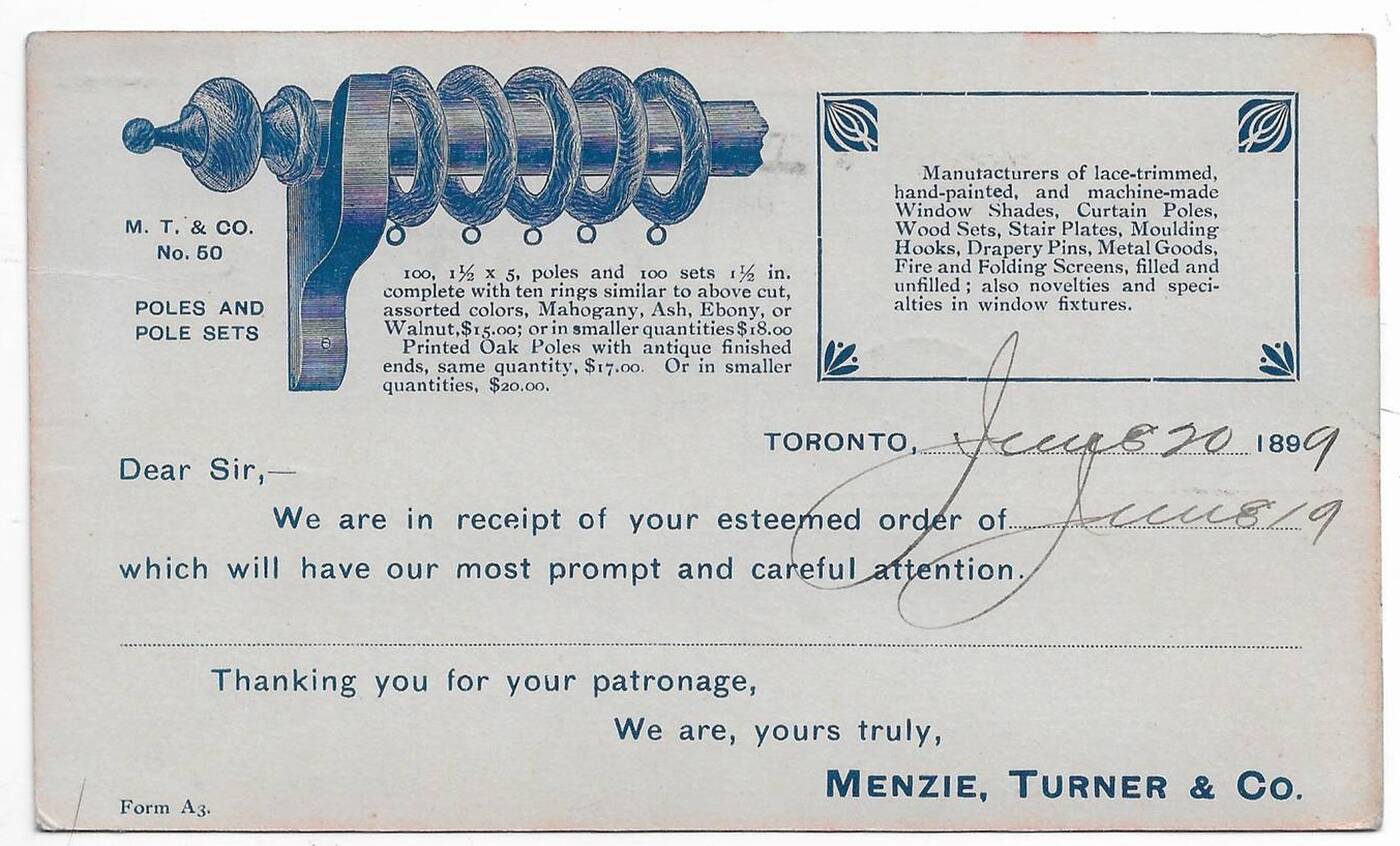 Postcards were sometimes used as a receipt.

Another postcard from Menzie, Turner & Co. shows how they were sometimes used as an ad and a receipt — postcards were often tasked with many roles in a small space. 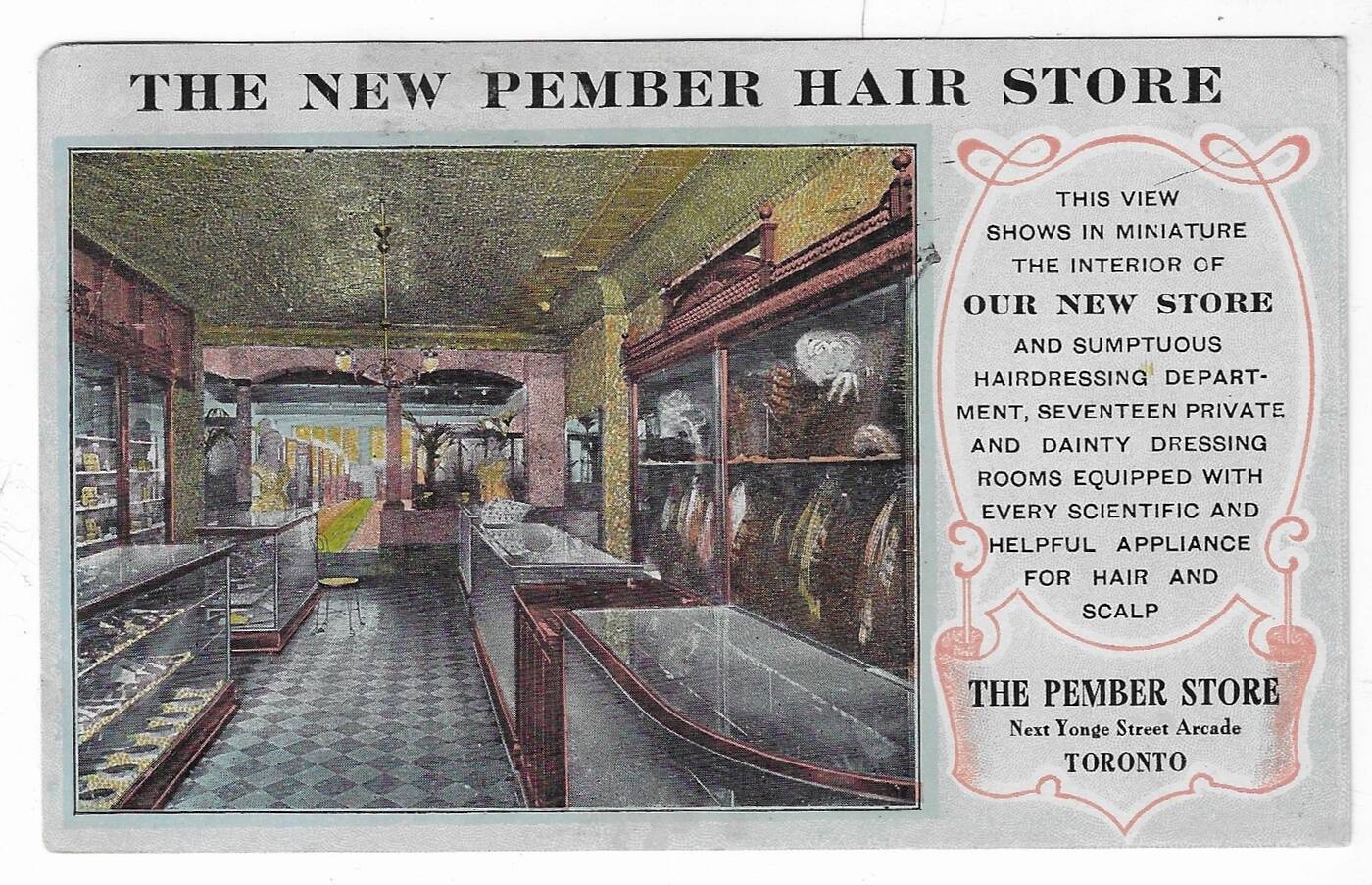 A postcard for the New Pember Hair Store.

One of Costello's favourite cards shows the interior of the Pember Hair Store, which was basically a wig shop, the nature of which was obscured with the fancy language.

“Every scientific and helpful appliance for hair and scalp” meant “wigs”. Note that science was all the rage at the time. 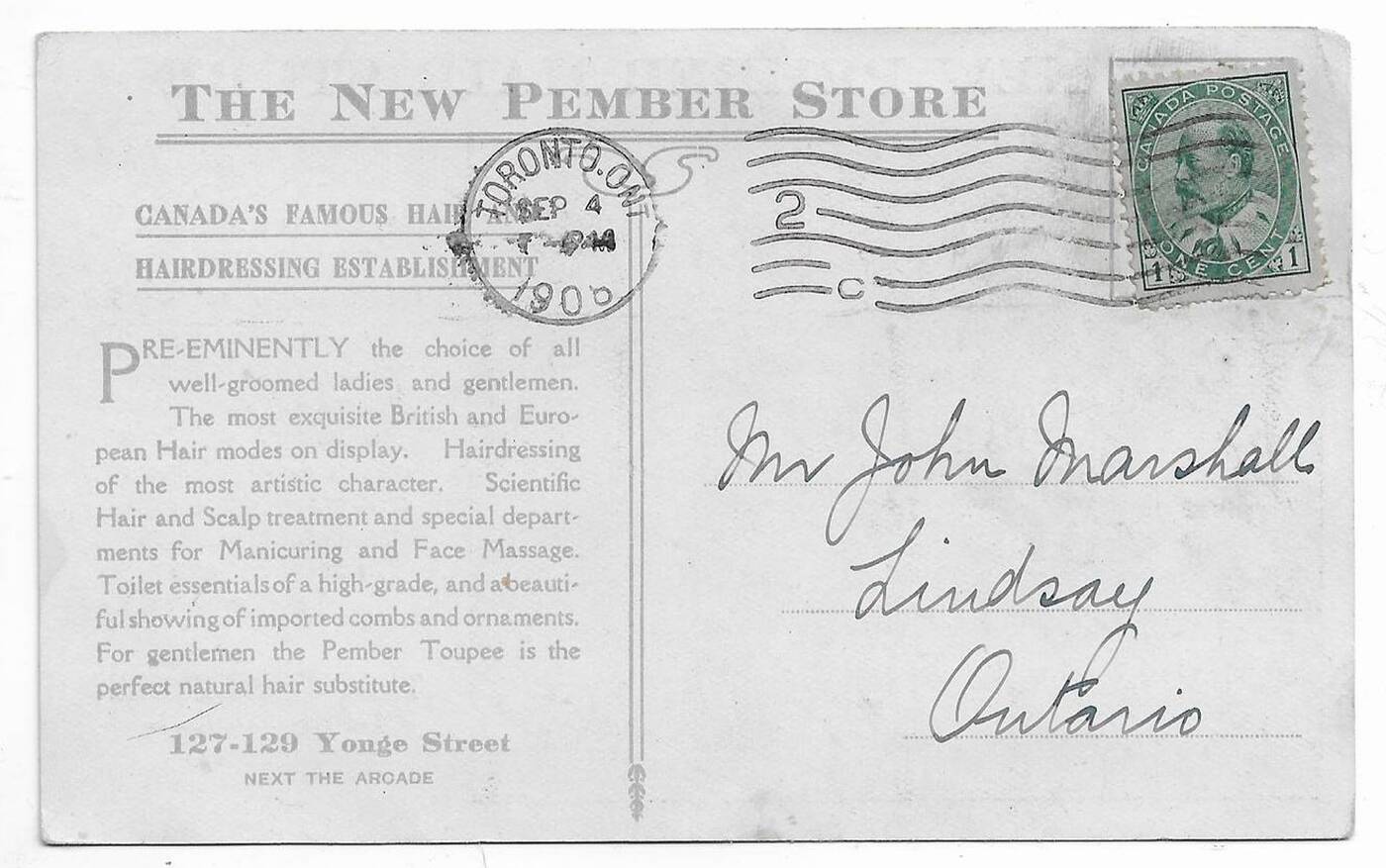 The back of the postcard for the New Pember Hair Store.

Buried right at the end of the ad on the back was an admission that the store sold toupees. 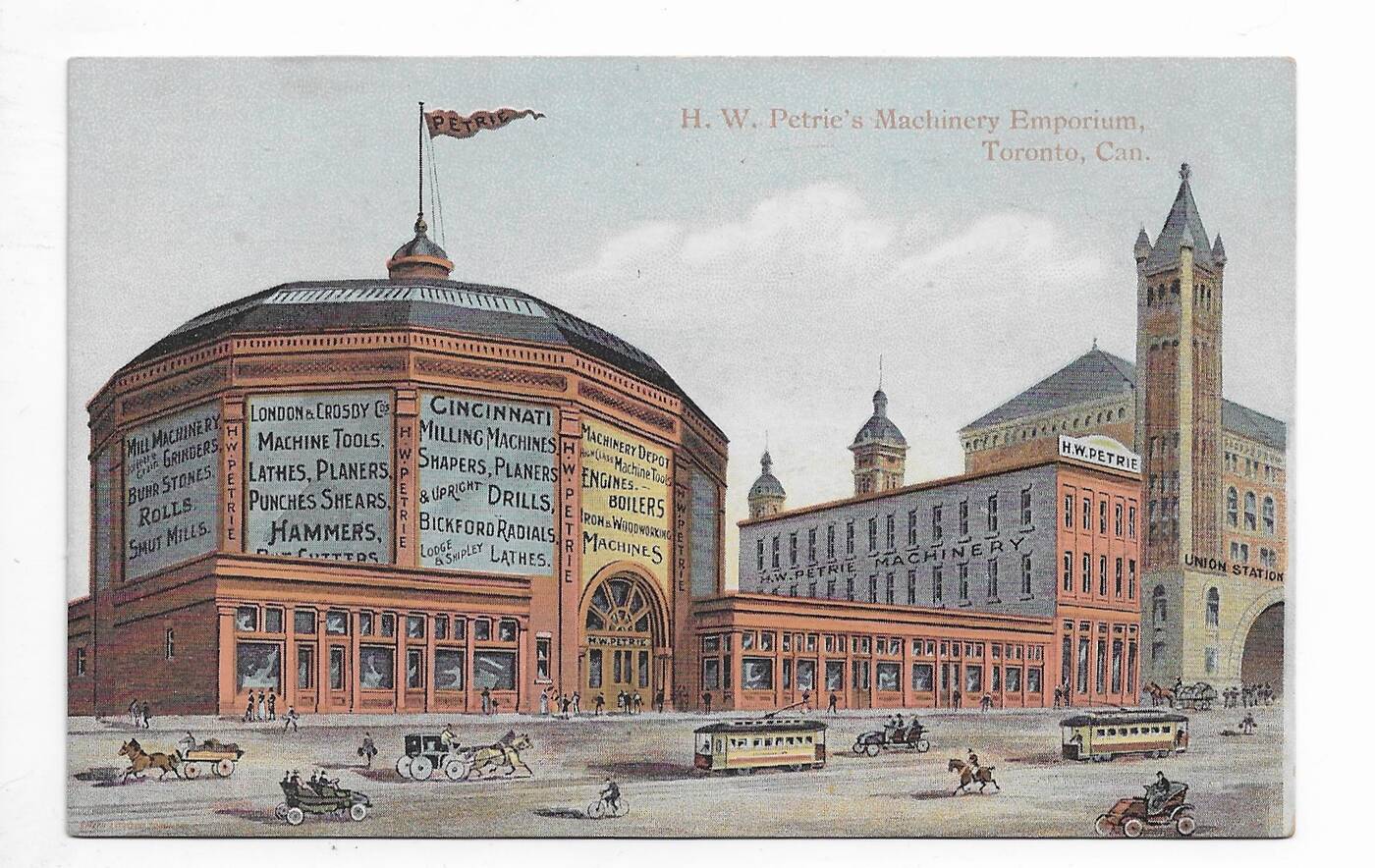 A postcard for Petrie Machinery.

Another postcard shows the famous Cyclorama Building, once located on Front St. between York and Simcoe.

This card has a typical feature of historic postcards — the building is a photo but the streetcars, horses and cyclists have been drawn in. If the streetcars had been real size they would have blocked the first story of the building.

Similarly, power lines have been painted as they would have obscured the building as well.  This is a nice example of the detail that was possible to include on postcards soon after the turn of the century. 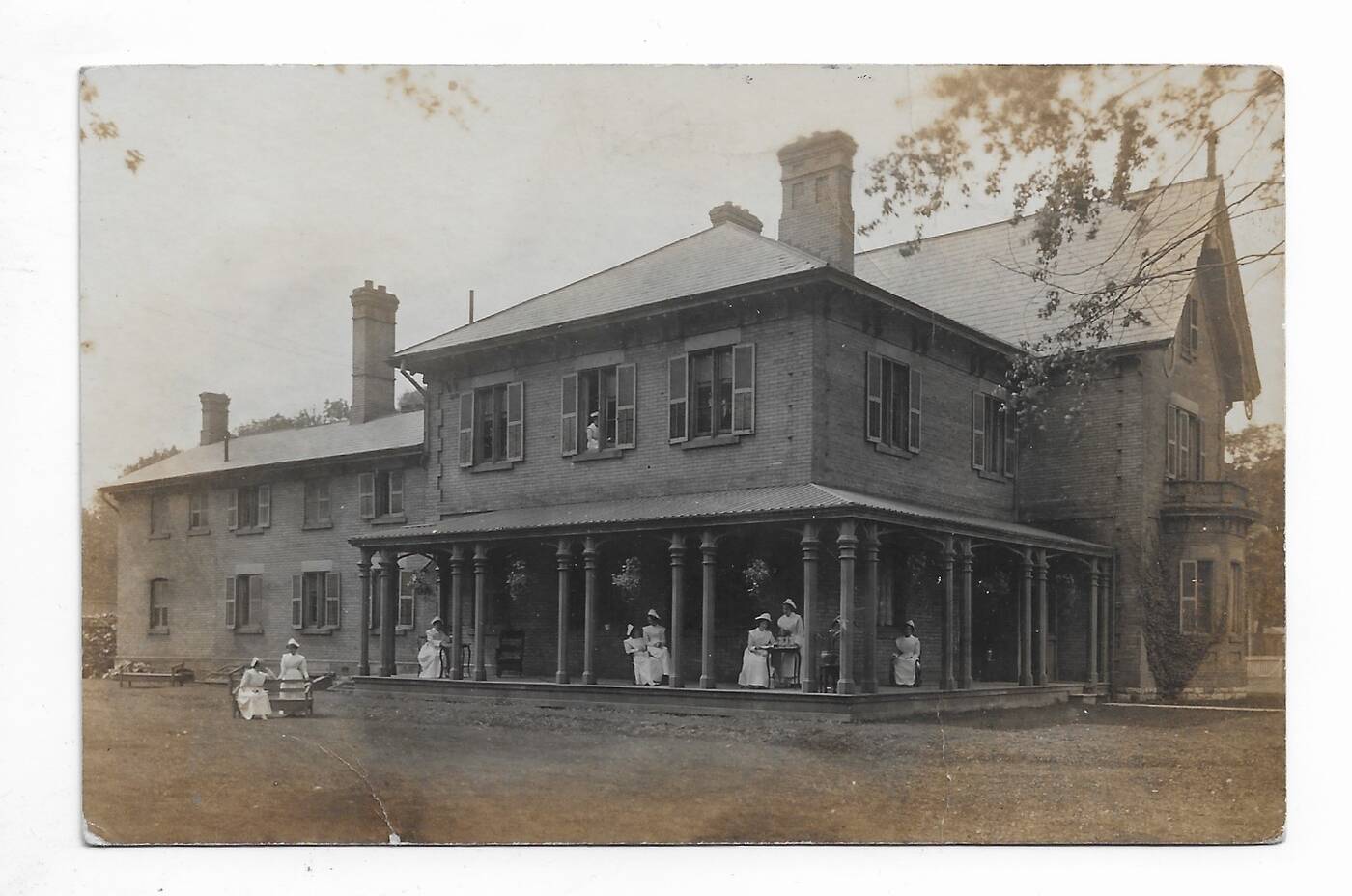 This postcard shows the Queen nurses residence in Toronto.

There's also a very rare postcard of the nurse’s residence at what is now CAMH Queen Street, but was then the Asylum for the Insane at 999 Queen St.

Formerly the residence of the Superintendent of the Asylum, all staff nurses were required to live there so they were available to work six days a week, 24 hours a day.

Only on Sundays were they permitted to attend church off of the grounds. This postcard was written by a nurse working at the asylum and addressed from 999 Queen St. 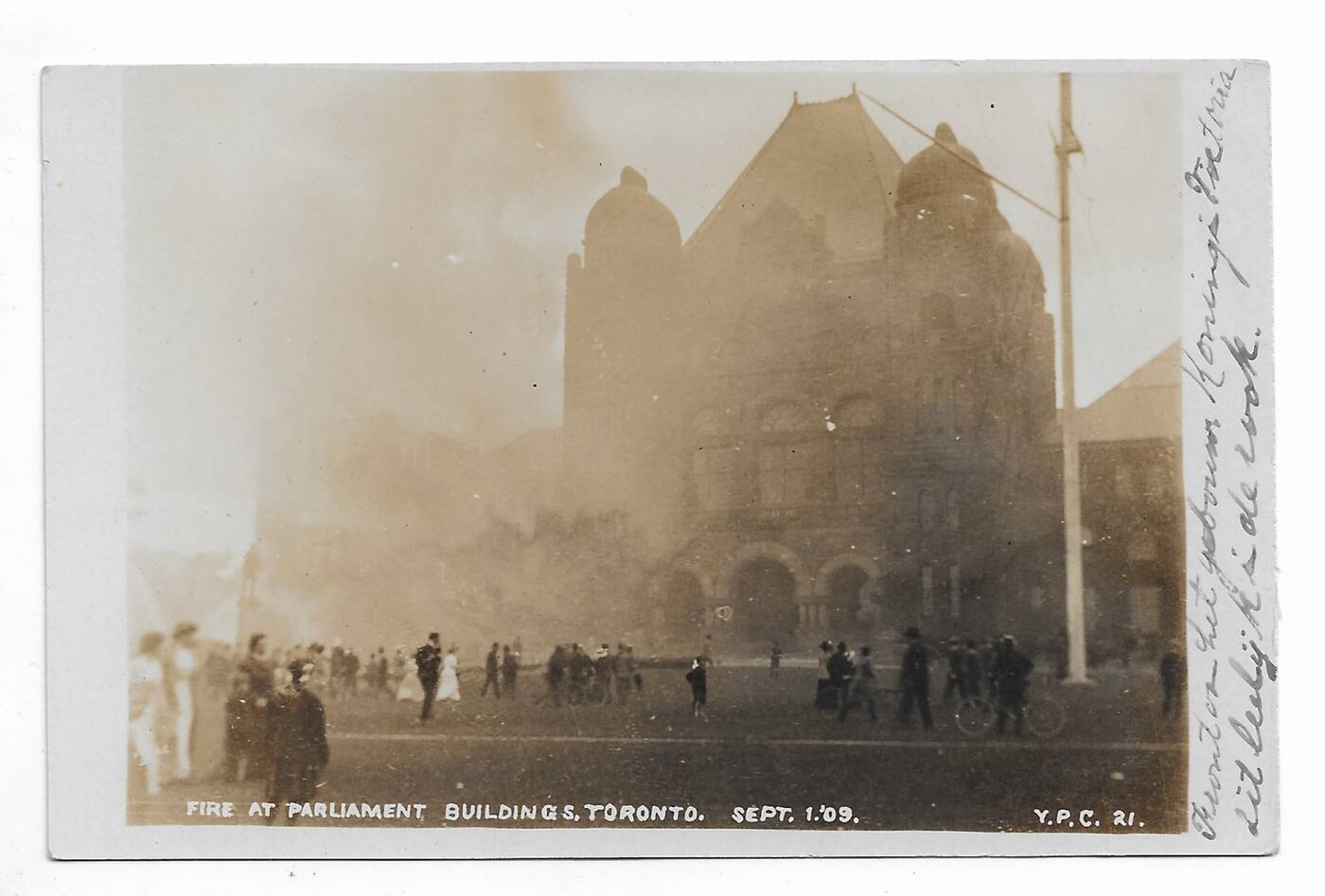 Postcards could also be used as the social media of the day. The caption on one old postcard notes the fire at Queen's Park in the early morning hours of Sept. 1, 1909. 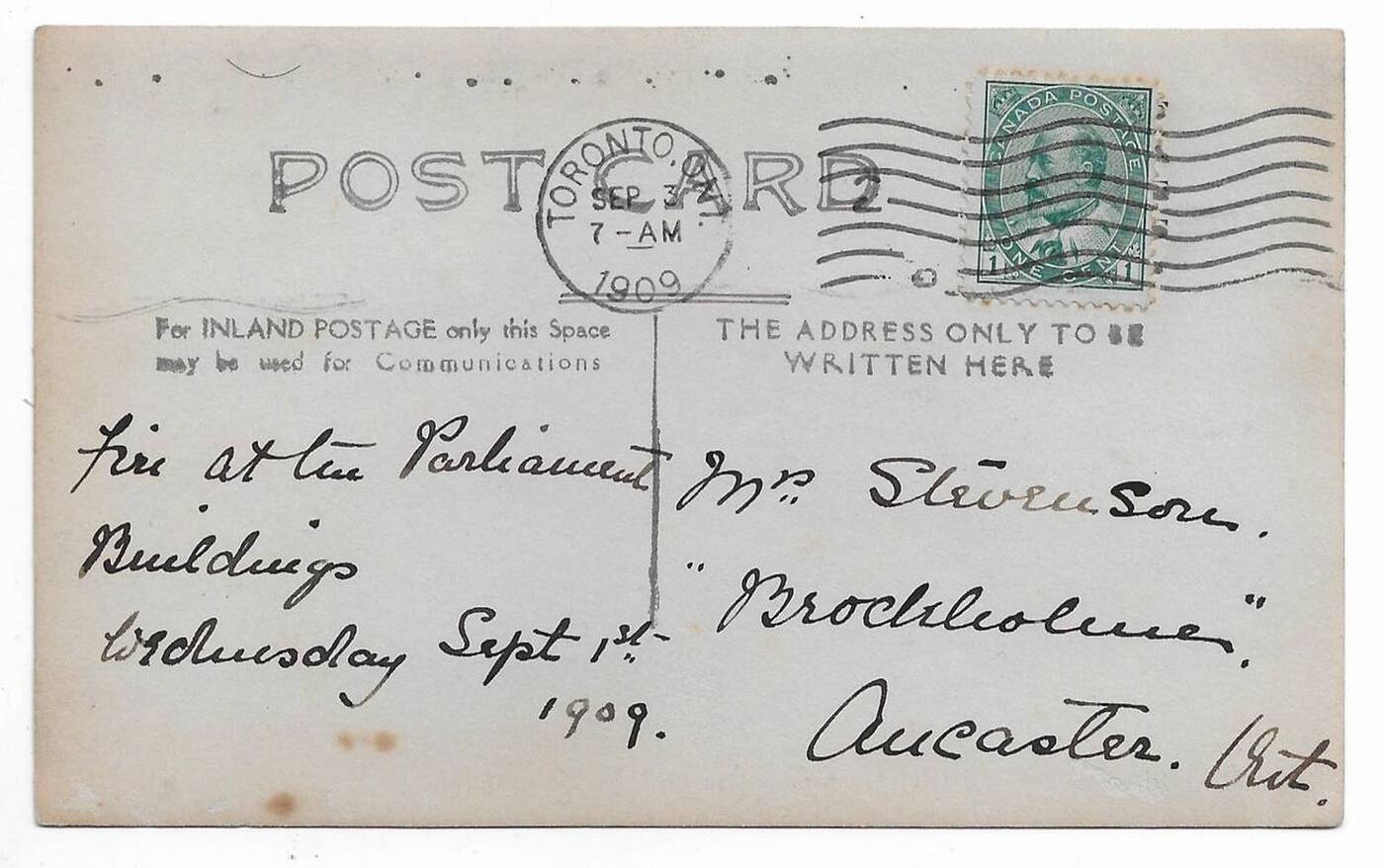 The back of the postcard depicting the fire at Queen's Park in Toronto.

The back of the postcard is postmarked Sept. 3, just two days later, and sent to Ancaster, Ontario to share the news. 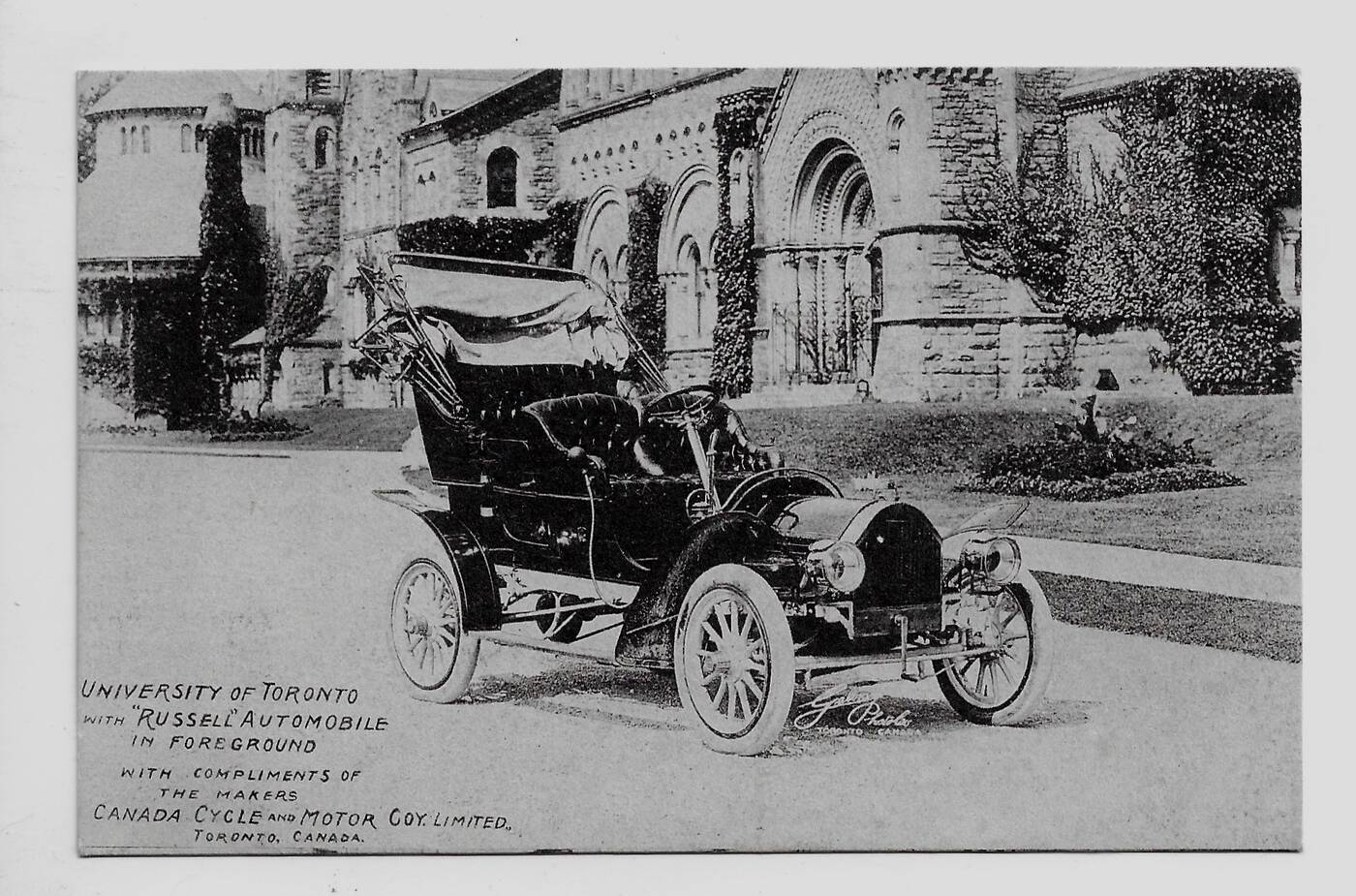 This postcard was taken at the University of Toronto with the Russell CCM in the foreground.

Another postcard is an interesting combination of promotions. Published by the University of Toronto, it shows the entrance to University College in the background, one of the oldest buildings in the city.

In the foreground is the brand new Canadian made Russell automobile, one of the very few Canadian automotive success stories.

It was made by the Canada Cycle and Motor Company, which might be better known today as CCM and was located in Weston (now part of Toronto) on Weston Road just north of St. Clair.

This is a very rare card as is any card showing Canadian automobiles or CCM and is much sought after. 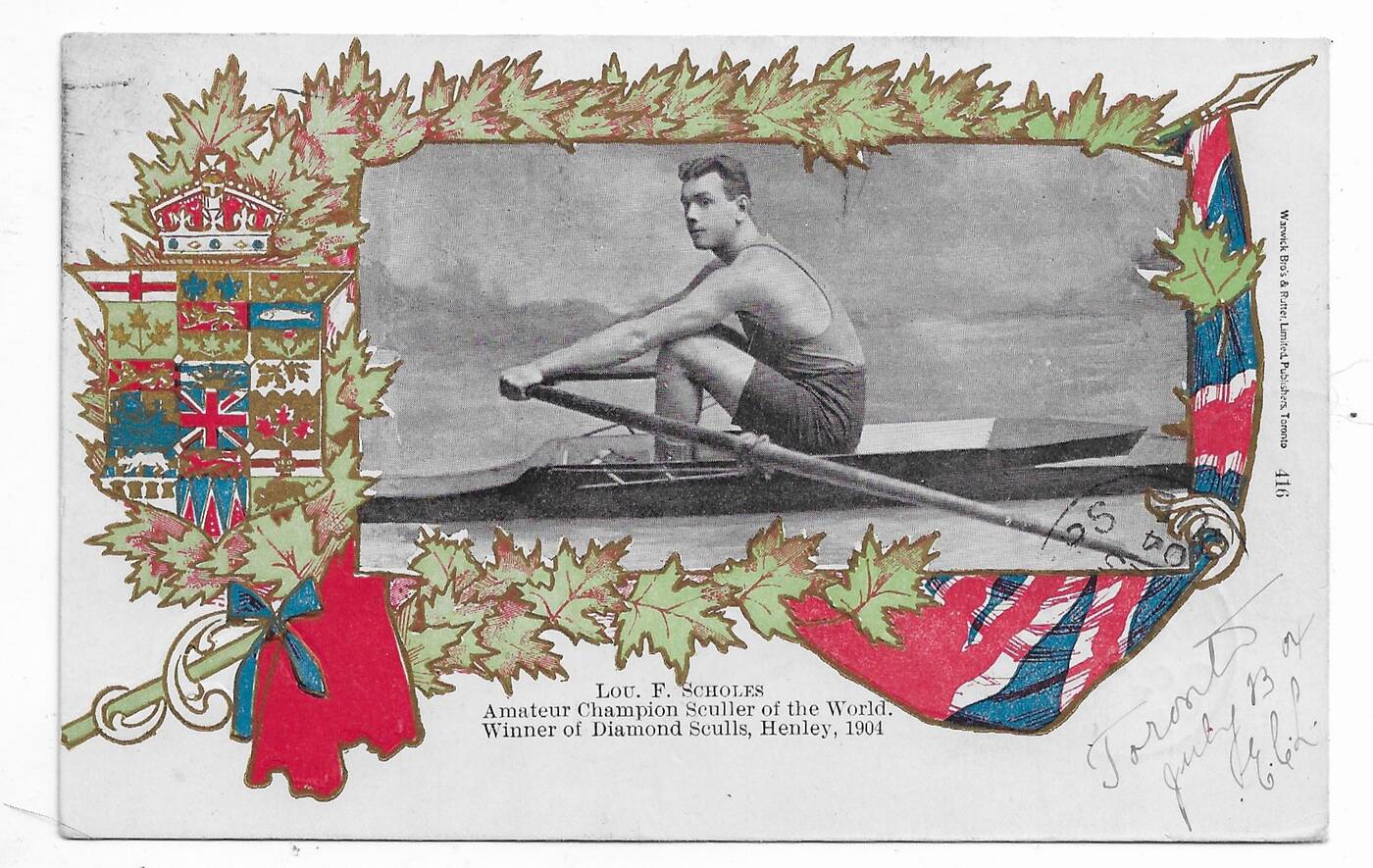 Lou Scholes, a local Toronto boy, was the first Canadian to win the British Diamond Sculls at Henley in 1901, making him a genuine Canadian hero.

He returned home to a huge reception and was the subject of many postcards which combined the fervent patriotism of the early 20th century with hero worship.

The postcard was made by local publisher Warwick Brothers and Rutters which had a factory at 401 King St. W. This is a highly desirable card both for patriotic colour and subject matter. 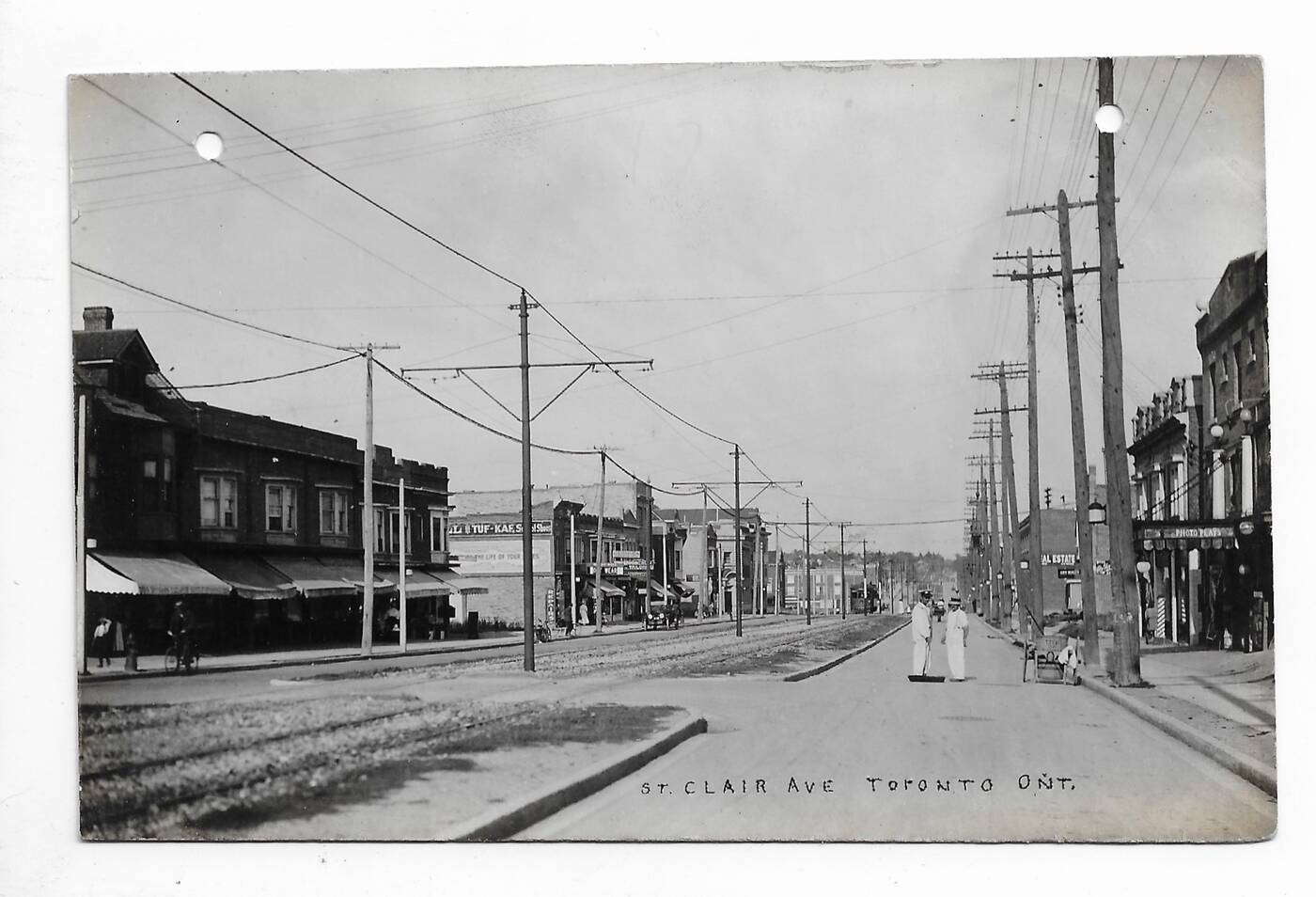 This postcard features an actual photo of St. Clair West.

It's interesting to see that a 72 postcard series was produced that documented the growth of the St. Clair and Dufferin neighbourhood in the period around 1916.

Look how empty St. Clair was in those days. Note that it shows the streetcar right of way which started in 1913, removed by 1935, only to be rebuilt (painfully) again in 2010.

Some enterprising individual would have taken these photos and had them developed on postcard paper then sold them, likely in local drugstores.

At the time, they would have cost no more than five cents. Costello paid $15 each for them, and they’re now worth no less than $35 a card. Times change. 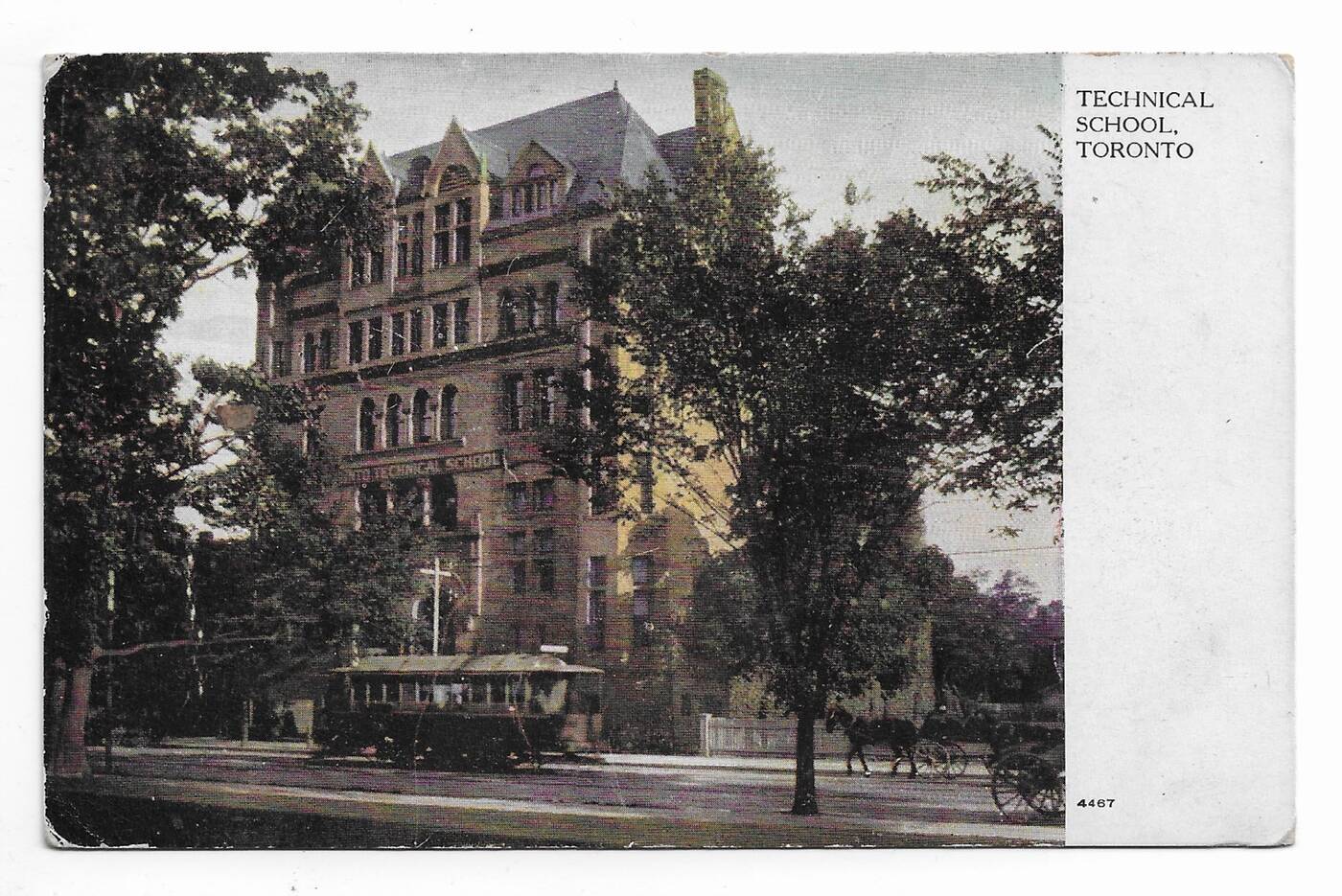 The Technical School in Toronto.

A favourite building of Costello's, the Toronto Technical School, is still standing on College Street, beside the hydro building just west of University Avenue.

It’s a majestic Victorian built of Toronto yellow brick and was the first school to be devoted to teaching technical subjects to students 15 years old and up.

It was started in 1891 to provide skilled labour for Toronto and the province. This card can be dated by the early streetcar in front of it. 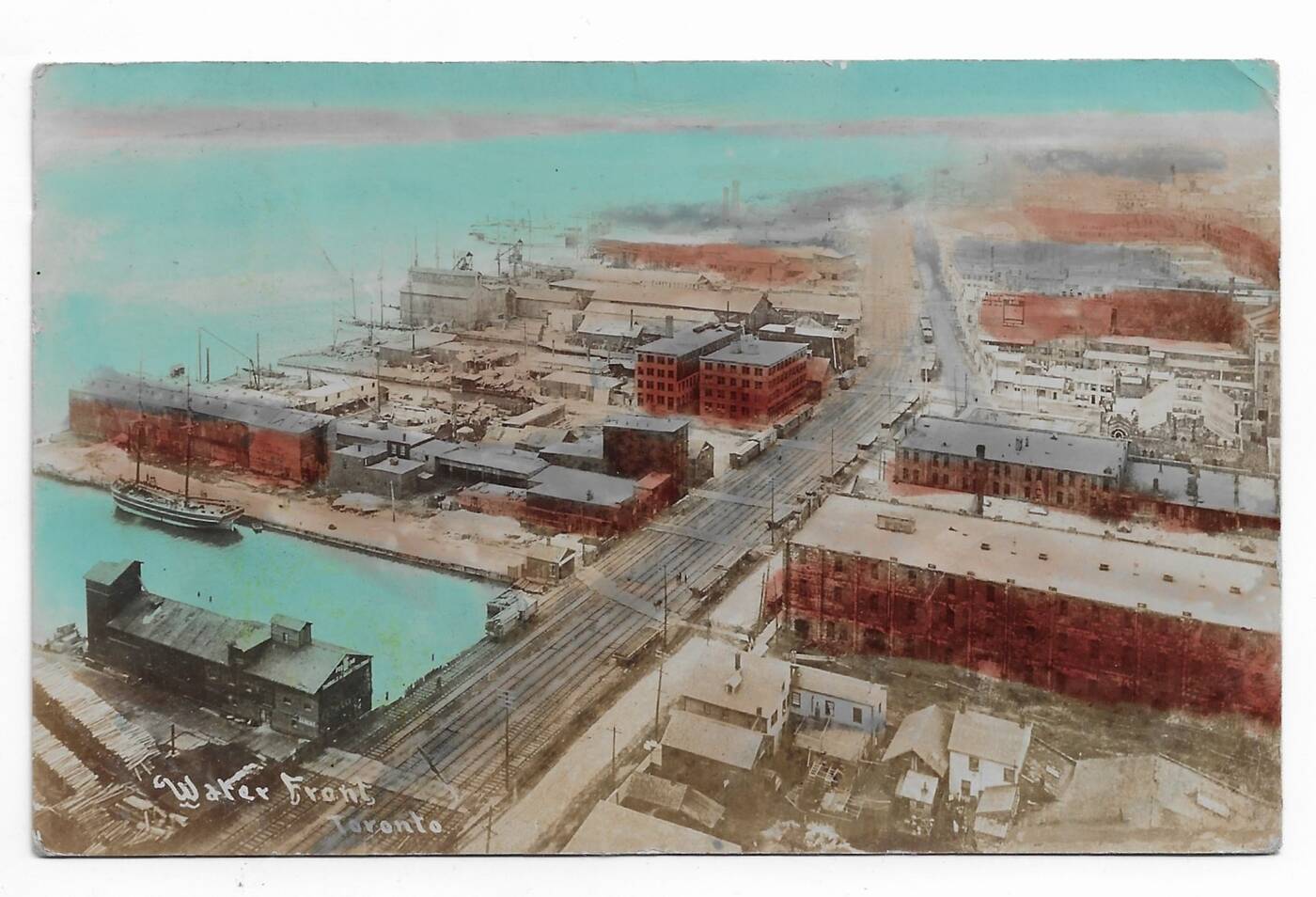 This postcard shows what Toronto's waterfront looked like at the time.

Postcards like this one of Toronto's waterfront show how photographs were sometimes hand coloured. It shows the docks and railroads that made Toronto a transportation hub, but the (somewhat sloppy) application of watercolours seems to make it more real.

Note the bottom right of the card — those buildings have not been painted and show what the original card looked like.

This is civic documentation combined with artistic expression, which aptly sums up what postcards were all about in the early 20th century.