Toronto's outdoor pools have been open to the public since June 27, but many of the city's aquatics staff are now speaking out about what they've deemed to be overwhelmingly unsafe conditions for both employees and the public at pools across the city.

Amanda and Zach are both aquatic coordinators for the City of Toronto, meaning they facilitate giving equipment and safety items out to staff and they oversee shifts of newer lifeguards at several pools around the city within specific regions.

They've asked to remain anonymous as they've specifically been told not to speak to the media, so blogTO has changed their names to preserve their privacy.

Both city workers say they are extremely worried about the safety standards currently present at Toronto's pools, and they cite a lack of training, insufficient personal protective equipment (PPE), expired cleaning chemicals and overall disorganization as just some of the sources for their concerns.

"The amount of time it usually takes us to open and get ready is about a month and a half. So we're already starting mid-May to staff our pools, trainings, ordering supplies and everything," said Amanda of a typical summer in Toronto.

"[This year] we had a week and a half from when city council said, 'Okay, we're opening now' to our first day of opening."

Training was also online only this year and was supposed to take several hours to complete, but Amanda said it's entirely possible that young lifeguards and other staff members simply clicked right through the training — and there's no real way to ensure it was properly completed.

This, according to Amanda, is just the first blip in a series of mishandled issues.

During a regular year, pool staff members are required to wear coveralls when pouring chlorine into the water. This year, Amanda said she and some of her colleagues discovered that the suits are actually single-use, despite the fact that they're reused at Toronto pools time and time again.

This directive is written right on the tags of the coveralls, though Amanda said the tags are usually ripped off before they're given directly to employees. This year, because of the rushed opening, someone left the tags on.

"Last year, every wading pool had the same hazmat suit the entire summer, which is very common. That's usually the case unless it rips or unless it gets moldy in the bin, which sometimes doesn't even get reported. And then the kids just end up using moldy or ripped hazmat suits," said Zach, adding that they're often used three to four times per day, especially at wading pools which have less water and require more chlorine.

He also said the tags specify that the suits are meant for spraying paint or another chemical of some kind, and not actually for use at a pool at all. 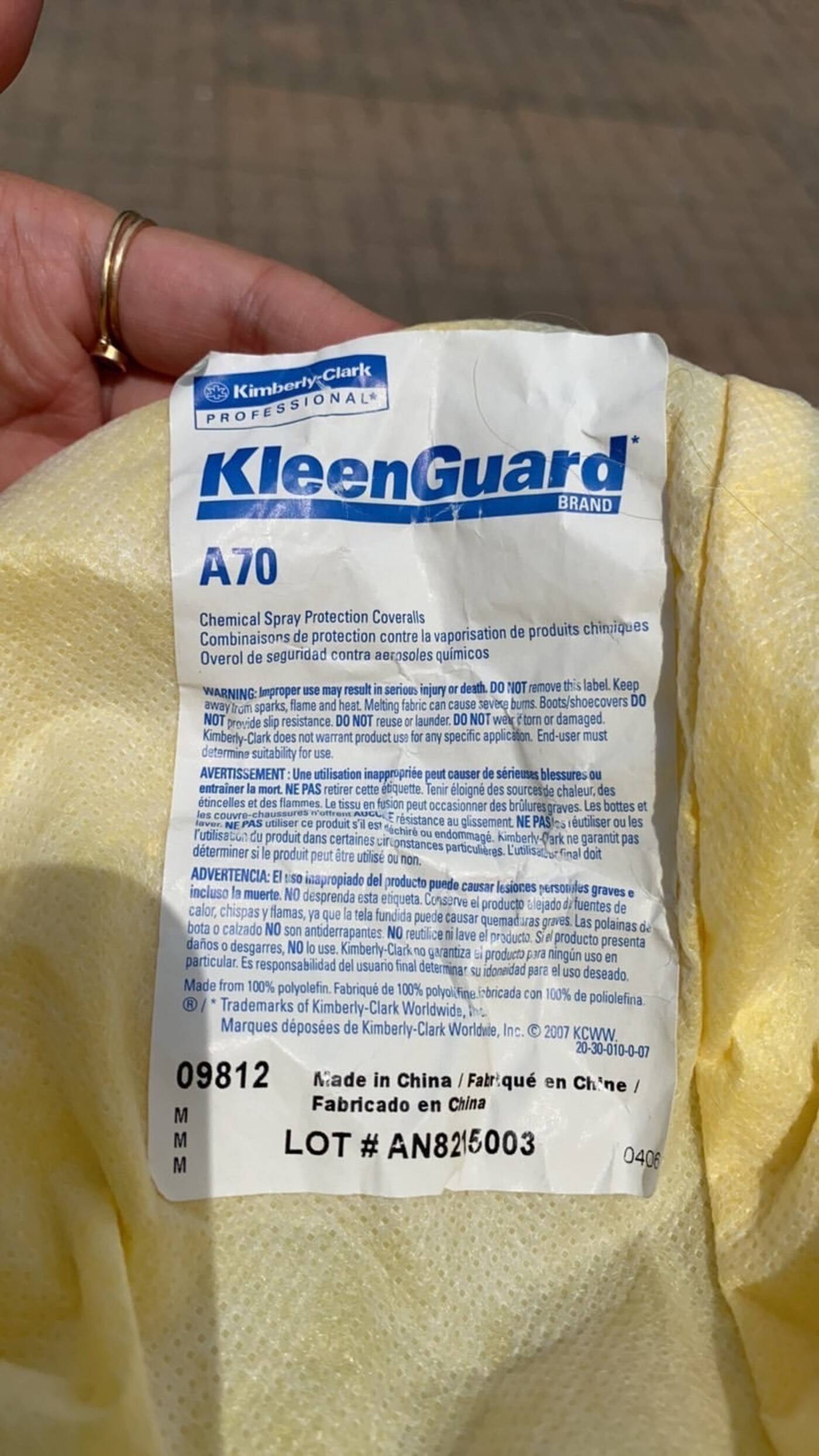 The tag of the hazmat suit specifies that they are single-use.

At Amanda's pool, she said mouldy coveralls from last year were being used when they first reopened this summer since they had not been provided with new ones.

In addition to the coverall issue, Amanda and Zach say there's a major shortage of PPE for pool employees due to the fact that they're now sharing with frontline healthcare workers.

"My pool only has one box of paper masks and they're those disposable ones, and they're not even supposed to be used on the daily," Amanda said. "So our employers have told us that we are responsible for bringing our own masks to work. They're not providing it to us."

Staff has been provided with a certain number of face shields, but they're also supposed to be single-use only due to a foam piece that collects sweat and is no longer useful after being worn.

When this was reported to upper management, Amanda says she was told that she would be provided with at least one per staff member so they wouldn't have to be reused by different people, but each person would still have to reuse their own.

"But then when I was looking at it, I only received eight, and I have a staff of 16," she said. "So are we saying that eight people don't get [shields] now?"

The decision to reopen pools, according to Zach, was completely counterproductive considering the fact that staff now require the same PPE that is already desperately needed by healthcare workers.

"And our government and our municipality has decided to create another risky environment that requires all of these supplies at every single location that will have to be refilled throughout the entire summer when those that are dealing with these issues on the front line are screaming out that they need more of this stuff."

On top of all this, Amanda said she recently discovered that expired chemicals are being used to clean surfaces at pools — despite the fact that sanitization is more important than ever amid the pandemic.

"The containers that were on the shelf, you know, were expired in 2017-2018, and the one that was actually being used to clean the facility on the day I was there was from 2015. And it says expiry, it doesn't say best before," she said. 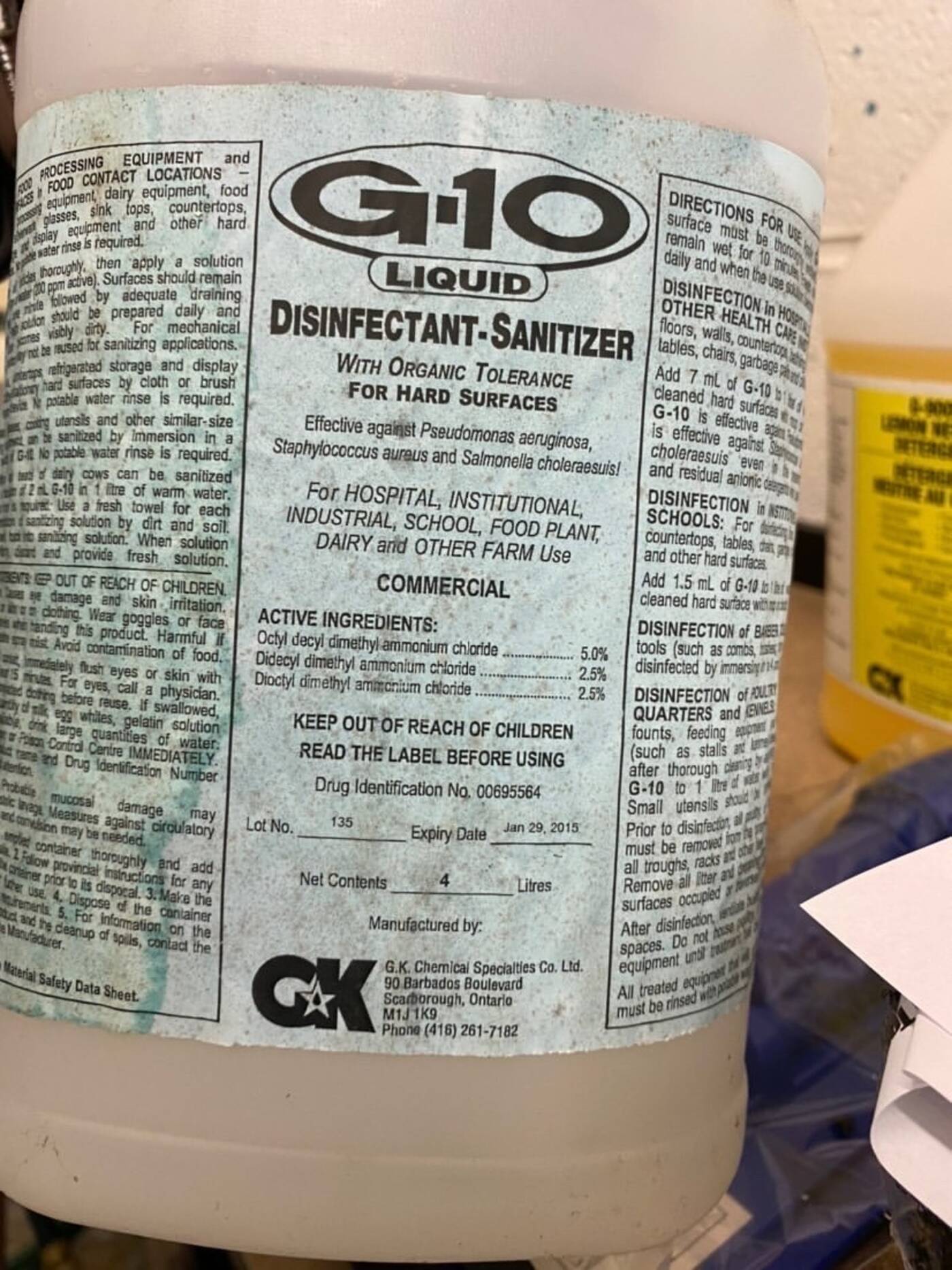 She brought this to the attention of her supervisor, but after not hearing back for some time, she took it upon herself to call the manufacturer and ask exactly what this meant in terms of the effectiveness of the product after its expiry date.

She was told that the chemicals are safe to use after they've expired, but their efficacy becomes slower, meaning the ratio has to be increased in order to provide the same level of sanitation.

"Had I not known that that means that, we would have been using lower efficacy, like, for the whole summer," she added.

Both Amanda and Zach say they're also concerned about the fact that most of the people working at pools are teenagers or young adults, and a main part of their job this summer is enforcing social distancing and crowd control rules — something that is likely to be difficult for an inexperienced 17-year-old.

They said they've each had experiences already this season with people questioning the pool capacity limit, which is currently reduced to 25 per cent, and they simply don't see how young adolescents are equipped to be dealing with some of the conflicts that will inevitably arise.

At Amanda's pool, for instance, she said one woman actually purposely coughed on the facility attendant after being told she had to wait because the pool was at capacity.

And aside from all of these complaints, the aquatics staff say many pool employees are experiencing intense stress due to having to work with the public while the risk of contracting COVID-19 lingers — including Amanda herself who said she's been experiencing serious anxiety.

After taking some of these concerns to their union (Local 79), members received an email forwarded from the city stating that anyone who refused to return to work after July 3 would be removed from the emergency leave list, making them ineligible for CERB.

On top of this, they were told that they could potentially lose their shifts for next summer as well since pool staff members are typically guaranteed the same employment every single summer.

And while both Amanda and Zach say every aquatics staff member they've spoken to shares most, if not all, of these concerns, they've had to grit their teeth and continue doing their jobs because many have no other option.

"I can't help but think about these 17, 18, 19, 20-year-olds that are trying to go on to university or just got into their own apartment for the first time and are trying to work their job," Zach said.

"What about single parents that have a job through the city? What about all of these, you know, full adults that are trying to pay off their student debt after going to school and trying to like, build a career in the city and then this is how they're being treated? It's a nightmare."

When asked by blogTO to comment on these allegations, the city simply provided a statement on the Toronto Public Health guidelines set for the safe use of recreational water amenities.

A spokesperson for the city said "staff used these as well as guidelines from industry experts the Lifesaving Society to develop staff training and protocols related to reducing the spread of COVID-19. Staff are receiving personal protective equipment in accordance with their duties and these health guidelines to ensure their health and safety while working."

They also said lifeguards employed by the city have received training in physical distancing in a workplace setting, personal protective equipment and procedures at pools designed to reduce the spread of COVID-19, and that materials and supplies for water treatment or cleaning are provided and used in accordance with health and safety procedures.

"Staff should alert a supervisor of any health and safety concerns," the spokesperson said, while also citing the reduced capacity at pools as well as the new sign-in procedures to allow for contact tracing and the time limits for swimmers to allow for enhanced cleaning protocols.

But Zach and Amanda say these methods haven't been effective, and they feel pools simply shouldn't be open until safety can be ensured for both staff and visitors alike.

"We need to have pools open, I'm not saying we shouldn't. Pools are very essential to a lot of low-income areas in terms of heat waves. A lot of people use that to cool themselves down, and so I think that's important that we have that access for them, but it needs to also just be safe for them, and also for us."

With files from Mercedes Gaztambide