Rent prices continue to plummet in Toronto as the global pandemic wears on, both hampering demand among those who'd rather not move for financial or safety reasons and boosting supply as Airbnb-lords transform their short-term rental units into permanent, long-term housing.

In other words, it's a great time to be looking for a new place in Toronto — at least in comparison to where we were at this time last year.

A new report from torontorentals.com and Bullpen Research & Consulting Inc. shows that the average rental price across all property types in the city fell significantly, dropping 5 per cent both month over month and year over year, from $2,476 in April of 2019 to $2,362 in April of 2020.

Broken down by unit type, size and region, however, we can see even steeper declines. 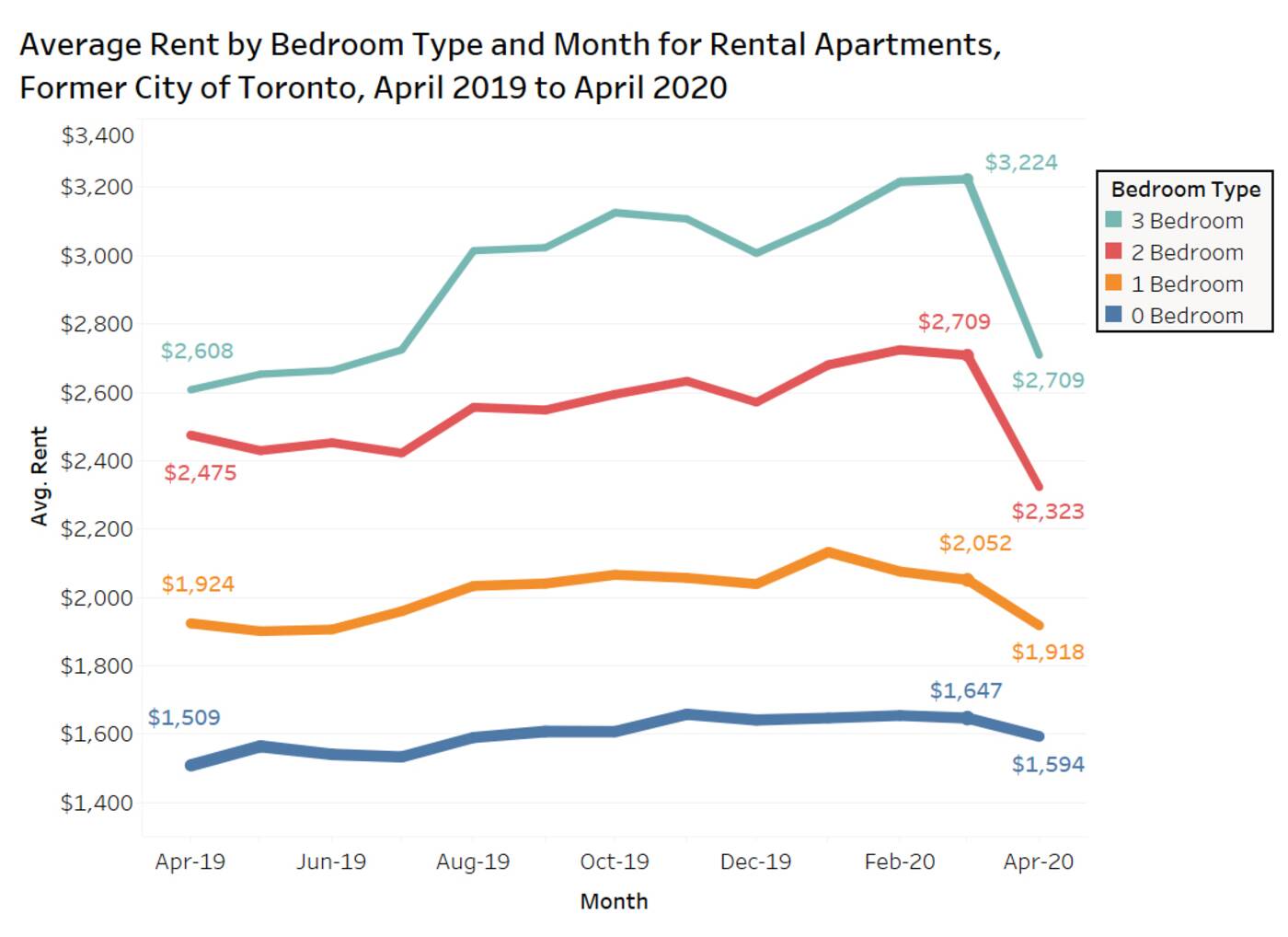 Purpose-built rental apartments within the City of Toronto, for instance, fell a whopping 11.2 per cent between March and April of this year to reach a current average of $1,945.

Size-wise, larger units experienced the most significant price drops across both the rental apartment and condo apartment markets. Suites rounded to 1,300 square feet in real estate listings were found by Bullpen to have dropped 20.2 per cent between March and April of this year.

"It is clear from the chart that demand has fallen more heavily for the larger and more expensive units than the smaller more affordable units." 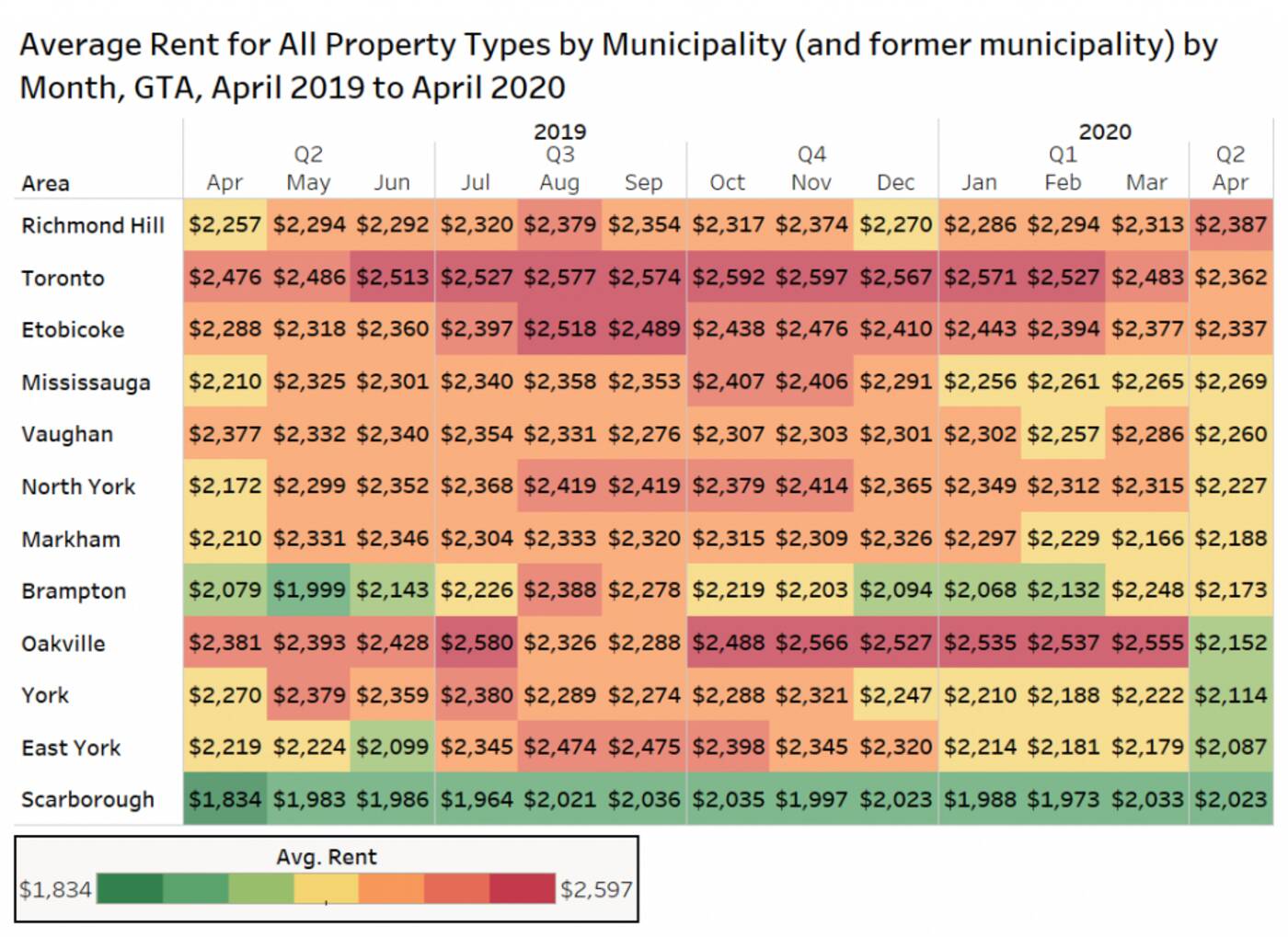 The amount of money you'll save by renting a place now, relative to last year, also varies by GTA municipality.

Average prices have actually gone up in Richmond Hill, Mississauga, Etobicoke, Brampton, North York and Scarborough, year over year, though Scarborough still remains the least expensive place in the GTA to rent at just $2,023 on average across all unit types.

Within Toronto proper, condo apartments in areas known to be flush with short-term rental units (read: Airbnbs) have shown the largest price declines per square foot, month over month.

"There has been much discussion regarding the short-term rental market, as tourism in the GTA has all but stopped, and employment that attracts shorter-term contract work has been put on hold," writes Myers. "The suites were also being rented to host parties and events, and those are not happening either."

Areas found to be experiencing the biggest declines are all in what analysts call "prime downtown markets" near the waterfront and in Yorkville. 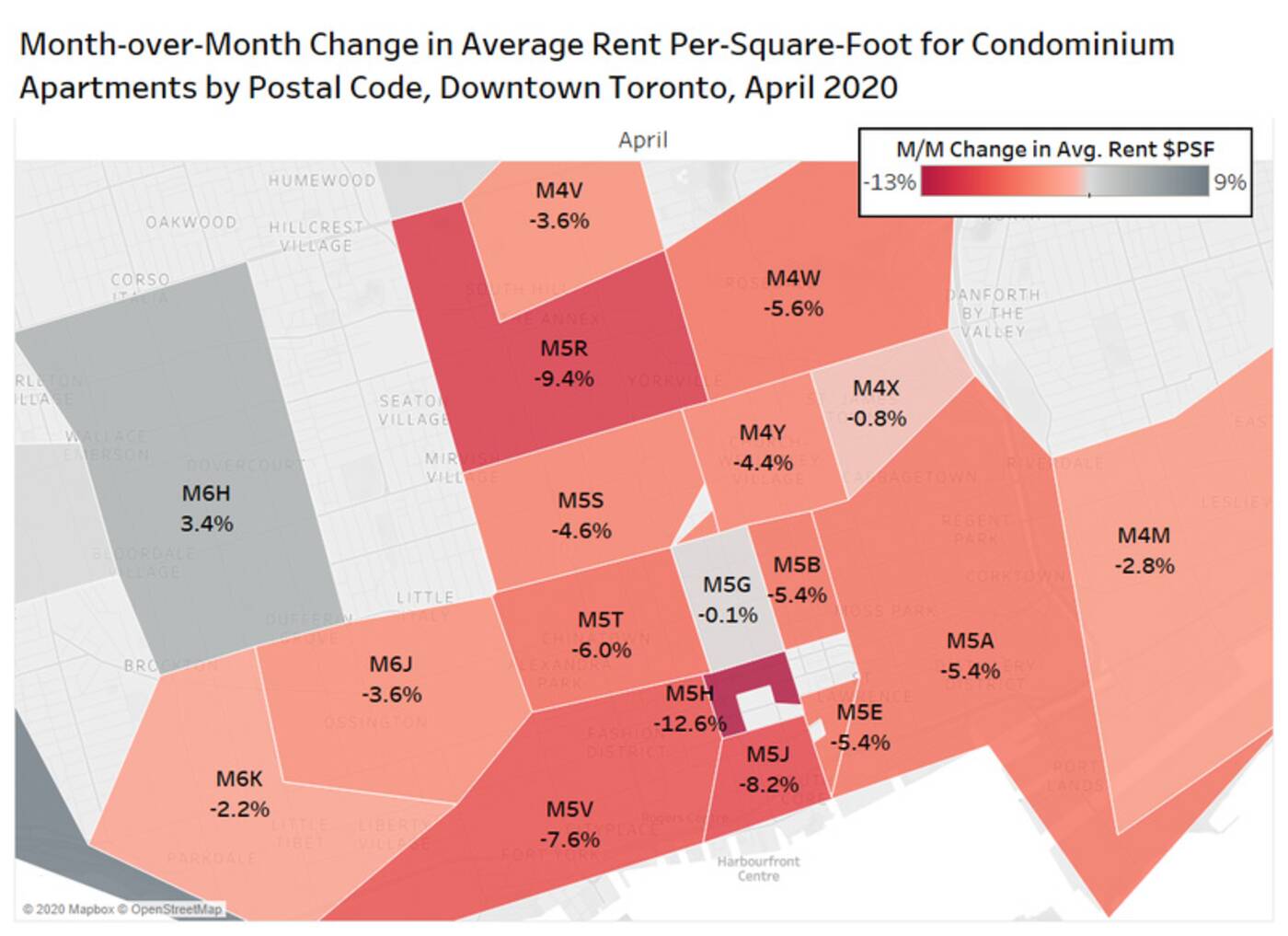 For those who want to get even more granular, torontorentals.com and Bullpen Research looked at rent trends in specific "major developments" with more than 10 current listings to see which particular buildings have seen prices drop the most between March and April.

"Some major developments experienced noteworthy declines including Three Hundred on Front Street and Massey Tower on Yonge Street at -13% monthly, as well as Smart House Condos on Queen Street at -11%, and 87 Peter at -7%," reads the torontorentals.com report.

Whether you're into the idea of living in a fancy downtown condo complex or renting a 3-bedroom house in the 'burbs, options for renters are better right now in the GTA than they've been in years.

"Rental demand has plummeted in Toronto as tenants stay in their current accommodations for fear of exposing themselves to COVID-19 and unemployment soars with the pandemic lockdown, reducing move up, move-down movement, as well as the creation of new households from recent graduates, students and immigrants," says Myers.

"Many landlords have tried to entice tenants to make a move in this uncertain time by lowering their asking rent."

And all it took was a global pandemic to finally get some relief.