With almost everything in Toronto being closed taxi companies have seen a huge drop in demand, but also a big dip in supply.

The Taxi Association of Toronto, who represent more than 350 independent cab drivers, has said that taxi drivers have lost almost all their business due to the pandemic.

"I'm speechless,” Jamal Said, the association's president, told blogTO. "Only 10 to 15% of drivers are still on the road. But there's nothing. No entertainment, no sports, no restaurants. There's nothing going on in the city."

He added that it's even worse for drivers who primarily relied on Union station and the airports.

Abdulkadir Mohamoud, CEO of Co-op Cabs, said: "90% of our business is essentially gone. We have a skeleton staff and drivers to perform essential trips Monday to Friday but in the evening it dies to nothing. Same with the weekend."

Meanwhile, Kristine Hubbard, Beck Taxi operations manager, told blogTO that they've seen a 70- 80% reduction in business and an equal amount of taxis are parked and not working right now.

"The landscape has changed completely. Our income has all but dried up," she said, explaining that Beck Taxi has currently waived the monthly fees that drivers are charged to operate with them as a gesture of support.

"It would be absurd to collect money from them at this time."

And while most drivers are off the road there's a dedicated few of them who are still willing to go out there and drive people to their appointments, for groceries or get prescriptions.

"I have so much respect for the people out there doing this. They're everyday heroes that are doing really a thankless job," Hubbard said.

"Instead of the backs of their heads, I wish people got to know the people and the stories of these taxi drivers."

Although, Hubbard explained Beck Taxi is really pushing their delivery services, citing the #StayHomeDelivery that they've been advertising strongly via social media and their app.

"We're really trying to encourage deliveries over having people travel with [our drivers]," she said.

"We've also been in communication with grocery chains to do curbside pick up and drop off but it's not moving as fast as I would like," said Mohamoud.

But when drivers do need to take people places they're exercising all precautions.

"Every season for taxi drivers is flu season. Our drivers are wiping down those shared areas, the vast majority are wearing masks and gloves. Some have installed protective shields," said Hubbard.

Co-op Cabs has taken similar measures including pre-screening passengers for signs of illness, ensuring drivers are using personal protective equipment and installing protective shields in all their vehicles.

"We're adapting as we move forward. We gotta do what we gotta do," said Mohamoud.

Beck Taxi is also pre-screening passengers for signs of the virus, limiting the number of passengers per car to two people and they've also ordered 500 masks for their drivers.

But apart from deliveries and driving the occasional person to an appointment there's not much taxi drivers can do but wait until this is all over or the government steps in to help. 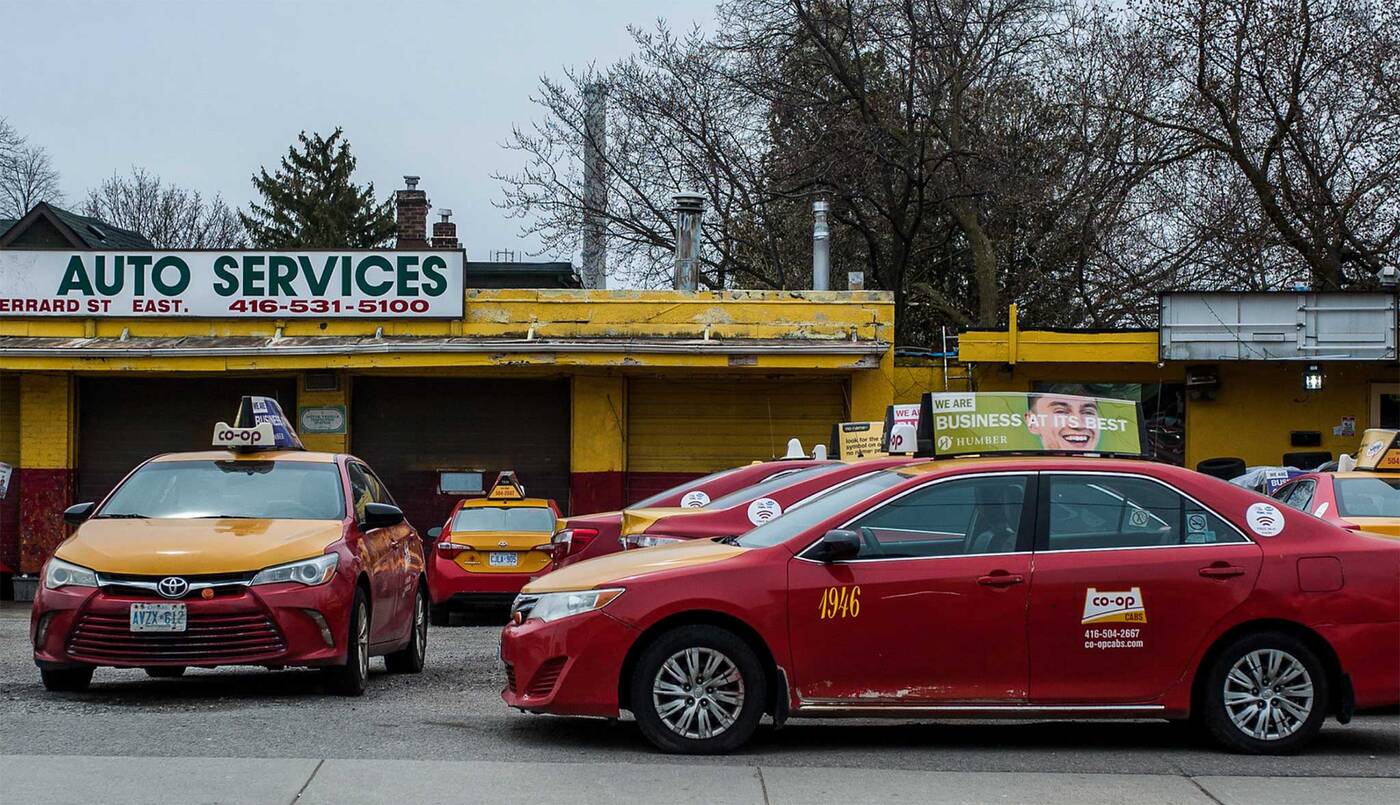 Taxis sitting idle in a lot on Gerrard East. Photo by Boris Terzic.

"Hopefully we all come out of this and we'll all be okay but we don't want to be the forgotten company," said Mohamoud about the lack of government support.

He told blogTO that he's asked the city of Toronto if they deferred or waived the $1,200 vehicle license renewal fee but has yet to hear back.

"We're just [doing] as much as we can, hoping that we end up with something to come back to," added Hubbard.

Said echoed the statements saying: "I hope this goes away very fast and we can all go back to work."