Being confined in an elevator with strangers isn't somewhere you want to find yourself right now, but when you live on the 30th floor of a condo, the situation becomes much more difficult to avoid.

Across Toronto, signs, barrier tape, and, in one instance, toothpicks in plastic cups, are being put up in and around most condo elevators to curb the spread of COVID-19.

But some condo-dwellers are still unsure whether or not their buildings are taking the right approach to enforcing physical distancing.

At the end of March, the City of Toronto first came out with a graphic on how to to properly distance in elevators.

The instructions involved adhering to bylaws by keeping 2 metres apart from others, and limiting the number of people per elevator to three at a time.

What elevator in Toronto is that big, like really, use some realistic graphics, elevators 1.5x1.5m thats 1 person at a time, simply unattainable when so many elevators are out across the city on a regular basis because you've still not passed new condo rules. Now is the time.

That was quickly rebuked by people who pointed out that there's no set size for residential elevators, which vary in dimensions across Toronto.

According to Ontario Building Code elevator car requirements, all buildings over three storeys must have at least one elevator large enough to fit an emergency stretcher, which is approximately 6.5 feet long and 2 feet wide.

But that doesn't apply to all the elevators in a building, and according to some residents on social media, their elevator size averages around 5 feet by 3 feet, which isn't large enough to accommodate even two people with 2 metres between them, let alone three. 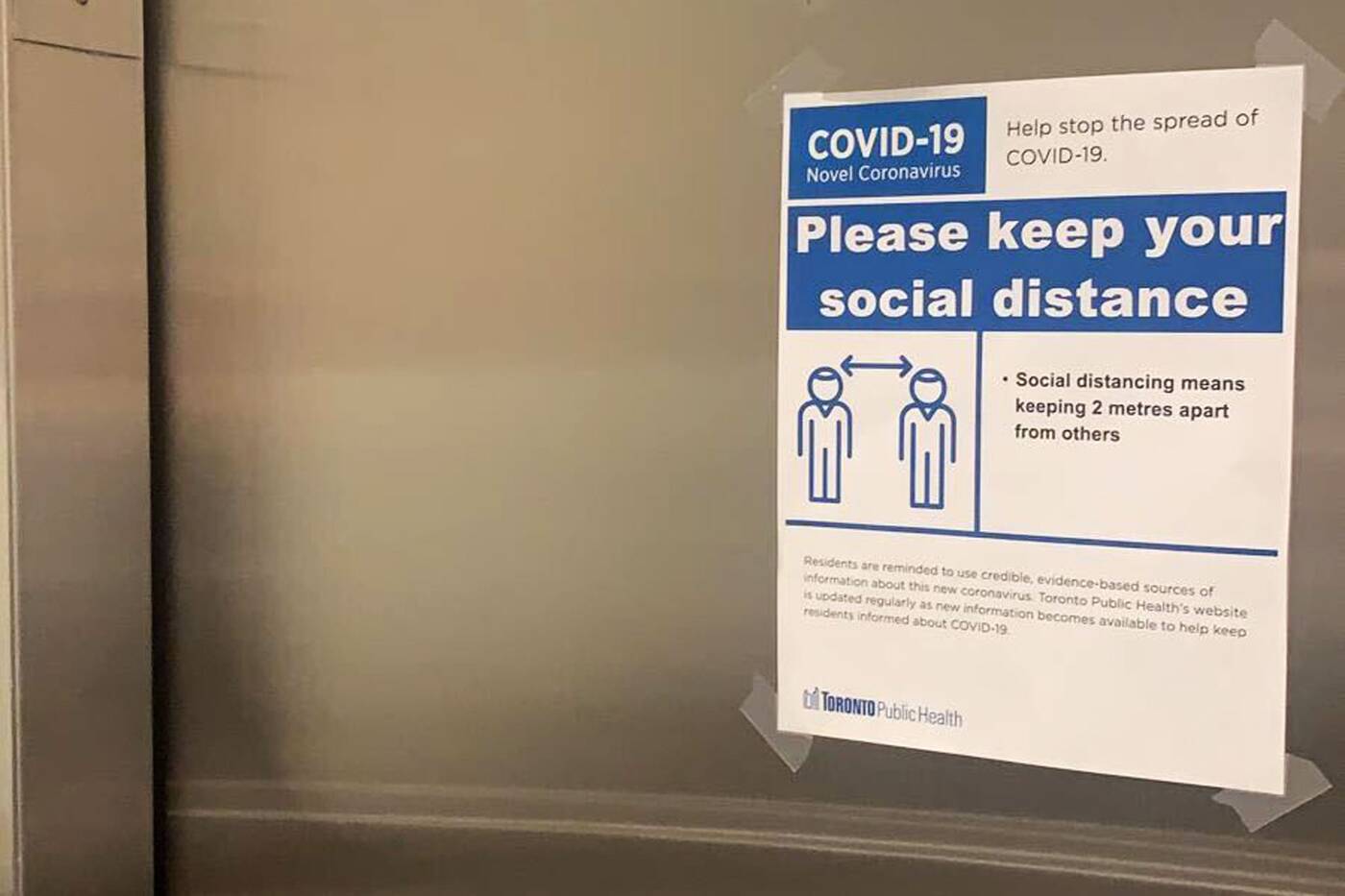 A new City poster released April 3 instructs passengers to keep 2 metres away from one another.

The City then came out with a different poster on April 3 with more general wording about the limit of people per elevator, and with a graphic showing two passengers instead of three.

But according to some residents, the old posters are still being pasted up in elevators, which has been confusing to many.

#coronacanada #Toronto #cp24
Lets do this in each Elevator pls, easy, simple and very useful,,, pic.twitter.com/vHJpOd6VoF

Condo managers themselves seem to be unclear about the 2-metre rule, though they're definitely trying in their own ways.

A toothpick system to help push elevator buttons down was an innovative approach at one Toronto condo, though pretty much ineffective is regular sanitation and physical distancing isn't being enforced as well.

I suck at pushing elevator buttons with my elbow, but I'm improving.
Some extra stops 🤣
We have 2 people per elevator rule now.
Lots of "Sorry, you go ahead, I wait".
##Toronto #canadalockdown

What appears to be the most effective solution so far is sticking to one person per elevator at a time. While that probably means some pretty long wait times for buildings with hundreds of residents, that might help encourage folks to stay at home, if they can.

And since gyms are closed, taking the stairs might be a good idea, though busy stairwells might not be a great spot to physically distance either.