For all of Premier Doug Ford's stern assurances on April 8 that Ontario would be ramping up its COVID-19 testing efforts significantly, the province has yet to see much of a consistent improvement in its numbers.

At least, not as much of an improvement as was promised.

"On Wednesday Doug Ford claimed that Ontario was hitting its COVID-19 testing targets. But Ford has moved the goalposts to make those targets lower, and they're still not being met," reads the email from Ontario's official opposition party.

"The government still hasn't consistently met their own lower target, and as of Wednesday, the province has tested 100,000 fewer people by failing to meet its original target."

As of April 29, we're seeing less than even the lowest target number of tests per day. 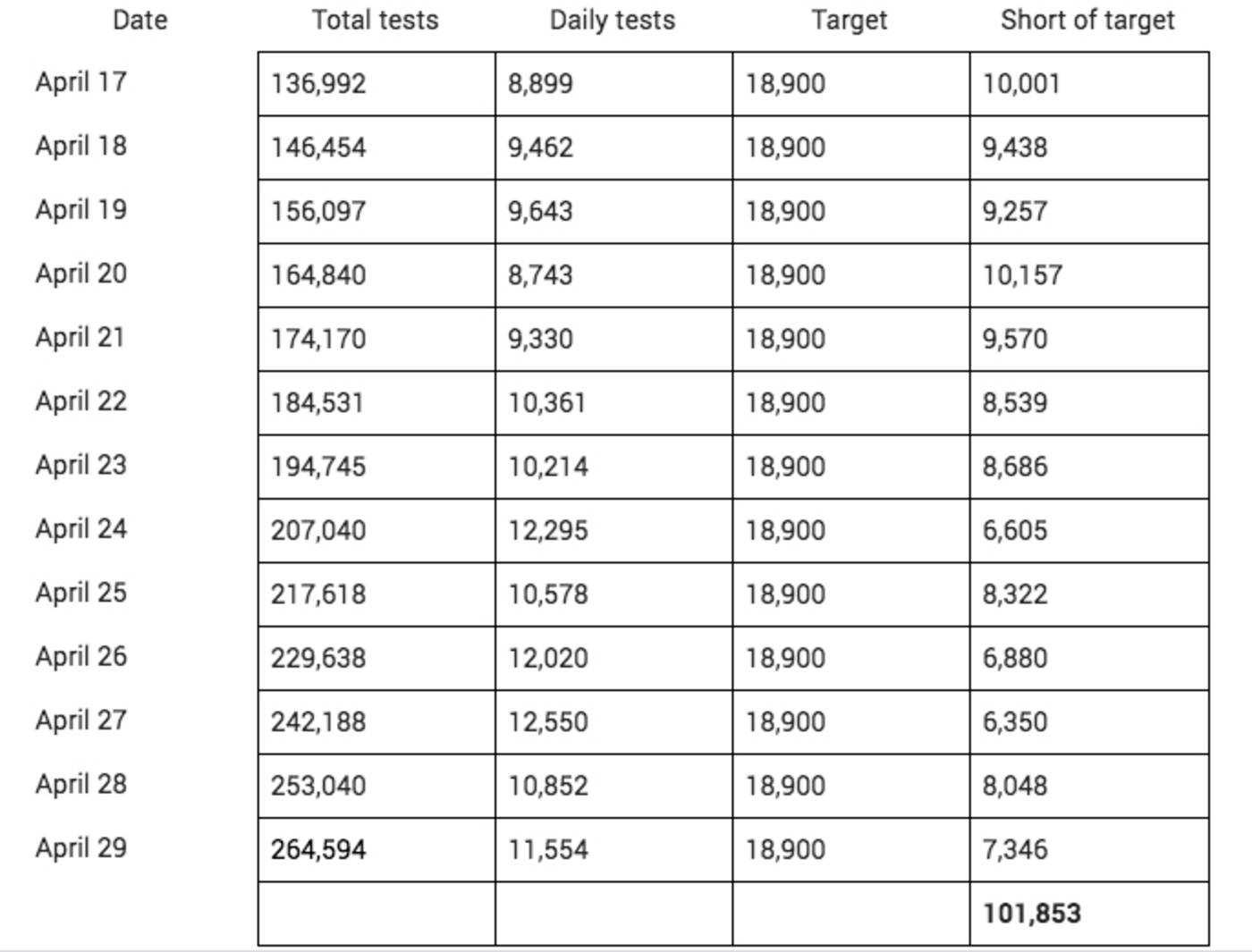 The Ontario NDP Party released this chart on Wednesday tracking the number of COVID-19 tests performed in Ontario vs. the ruling government's promised targets. Image via Ontario NDP.

Only 11,554 people were tested for COVID-19 across the province yesterday, which marks a great improvement over the dismal two and three thousand test-per-day we were seeing in early April. And yet, Ontario continues to lag behind other provinces in terms of its testing rates. The public is struggling to understand why.

"Well, we increased testing drastically… we had a little fallback yesterday, but the majority of the days we're testing over 12,500… we're getting close to our point of 14,000," said Ford during today's press conference when asked about the lag.

Ford noted that he was now satisfied with the work of healthcare professionals and public health units when it comes to testing, telling reporters that "they've been doing pretty good actually."

Be that as it may, one of the criteria put into place by Ontario's Chief Medical Officer of Health for relaxing emergency orders includes ongoing testing of suspected COVID-19 cases "to detect new outbreaks quickly."

A number of tests-per-day was not specified in the province's reopening framework, as released on Monday, but it stands to reason that Williams would want to see a number high enough to paint an accurate picture of where we stand in terms of the outbreak at any given time.

It remains to be seen what that number will be, or when (perhaps if) the province will ramp up testing rates to meet even its own goals.