To criminals working in the billion-dollar Canadian sex trafficking industry, women and girls are just products to be sold — or rented, rather, again and again, in a vicious and violent cycle that can feel impossible to escape.

This is the message behind a powerful new campaign by Covenant House Toronto, Canada's largest agency serving youth who are homeless, trafficked or at risk.

Called "Shoppable Girls," the awareness campaign is based around a slick website that looks much like that of any hip, youthful online clothing store.

Models are pictured throughout the site wearing cute jackets, beanies, purses, shoes, athletic apparel and other items that, upon first glance, seem to be up for sale. They're not. 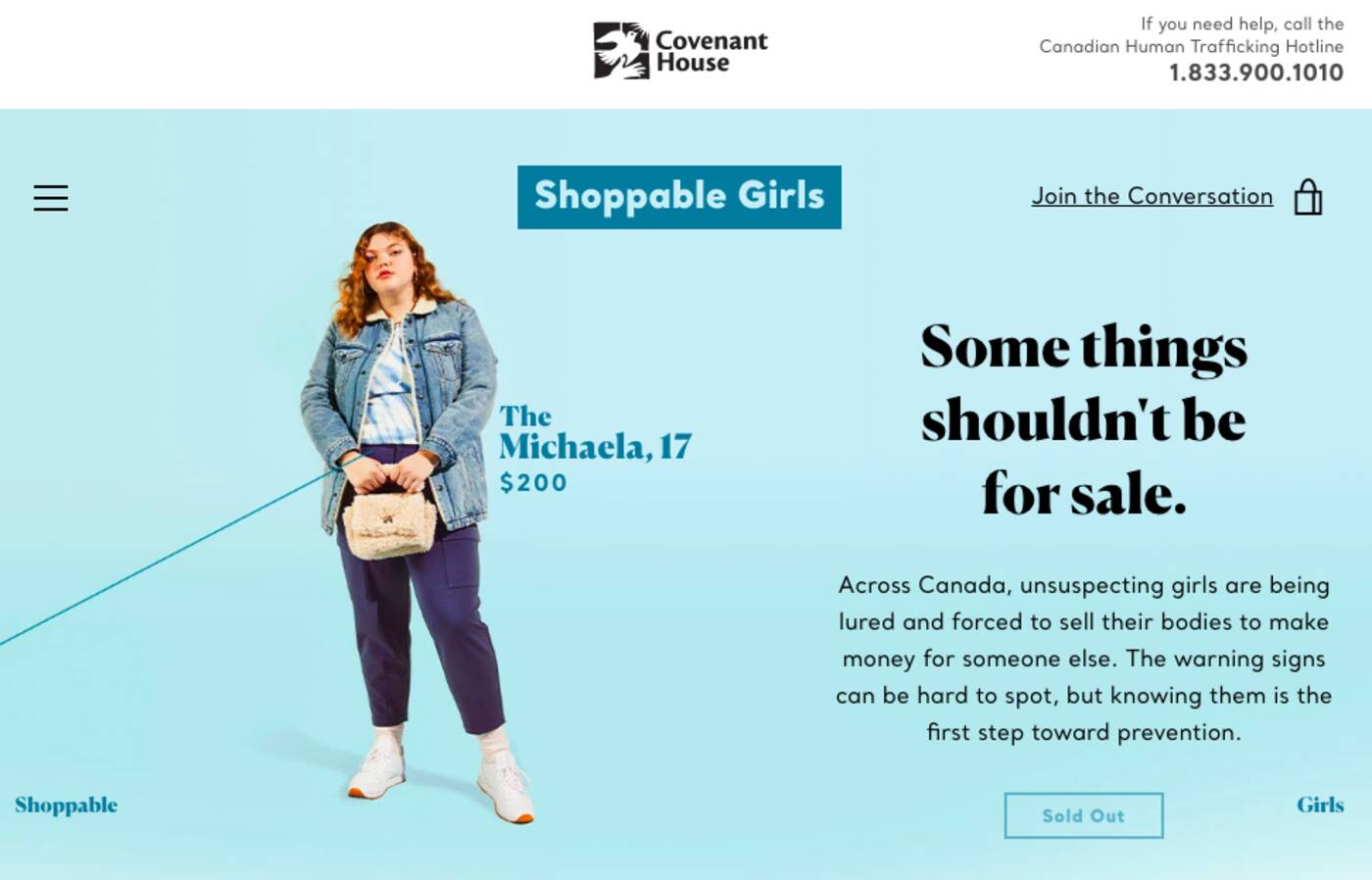 Instead, the website is flush with warning signs and facts about sex trafficking Canada, where 94 per cent of victims are Canadian citizens.

Clicking on any individual outfit in the site's "see the collection" section brings visitors not to a product page for pants or shoes, but to one for the model pictured wearing said pants or shoes.

"Some things shouldn't be or sale," read the product descriptions for both teens. "Across Canada, unsuspecting girls are being lured and forced to sell their bodies to make money for someone else.

"The warning signs can be hard to spot, but knowing them is the first step toward prevention." 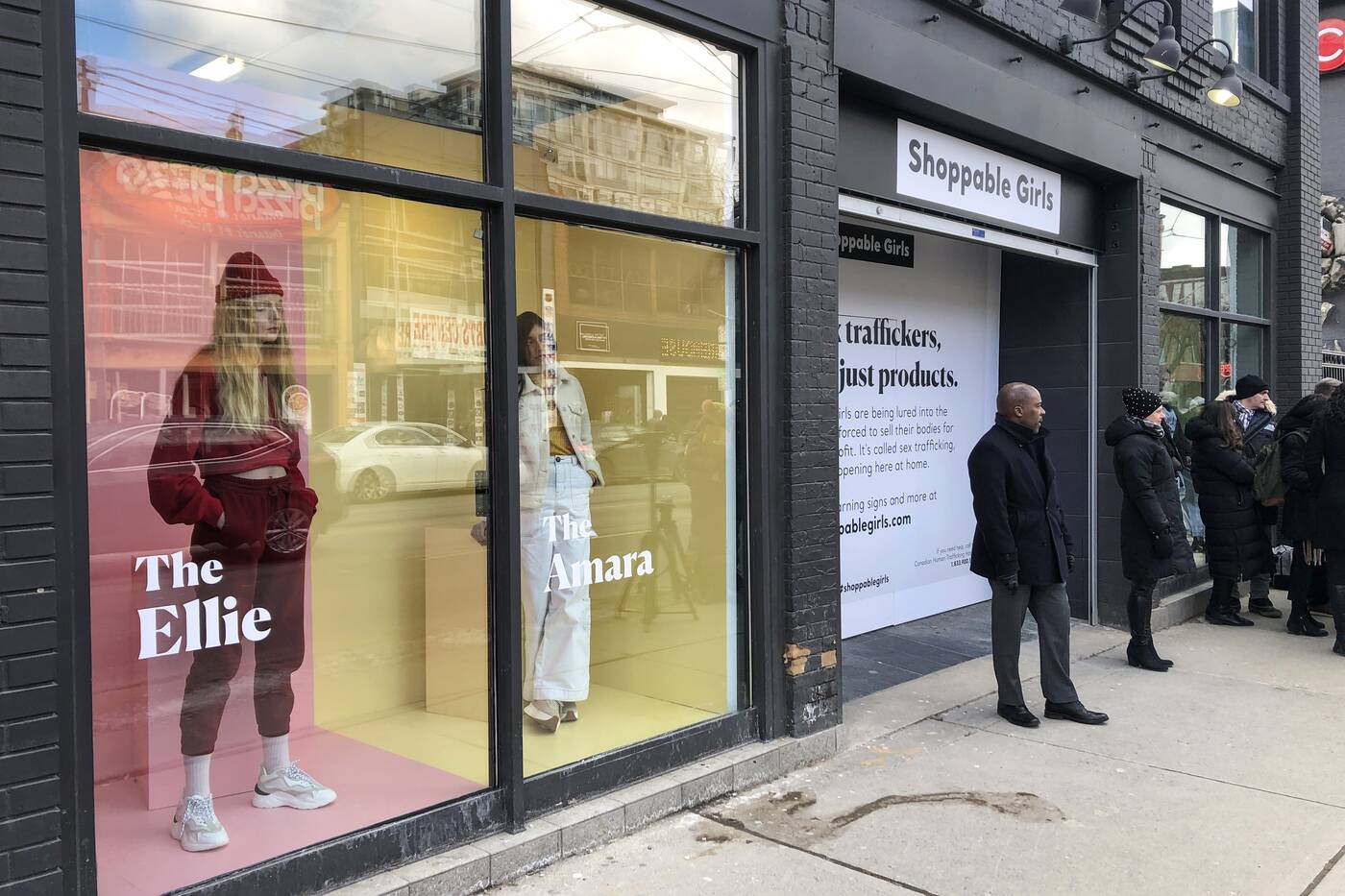 To promote the campaign in real life, models from the website were stationed in a downtown Toronto storefront on Thursday morning at a launch event calling attention to the plight of sex trafficking victims.

Covenant House says its goal with the display is "to raise awareness and start a dialogue about sex trafficking ahead of Human Trafficking Awareness Day on Feb. 22."

"The hope is Ontarians will be encouraged to educate themselves on the issue and ultimately be equipped to help prevent sex trafficking," reads a release from the non-profit organization.

"Just like sex trafficking, which can often go unnoticed if you don't know what to look for, the Shoppable Girls campaign shows that the victims aren't always immediately identifiable as the signs are often misunderstood."

The campaign strives to reach young people, in particular, to teach them about sex trafficking myths and warning signs that may protect themselves and help them look out for their friends. 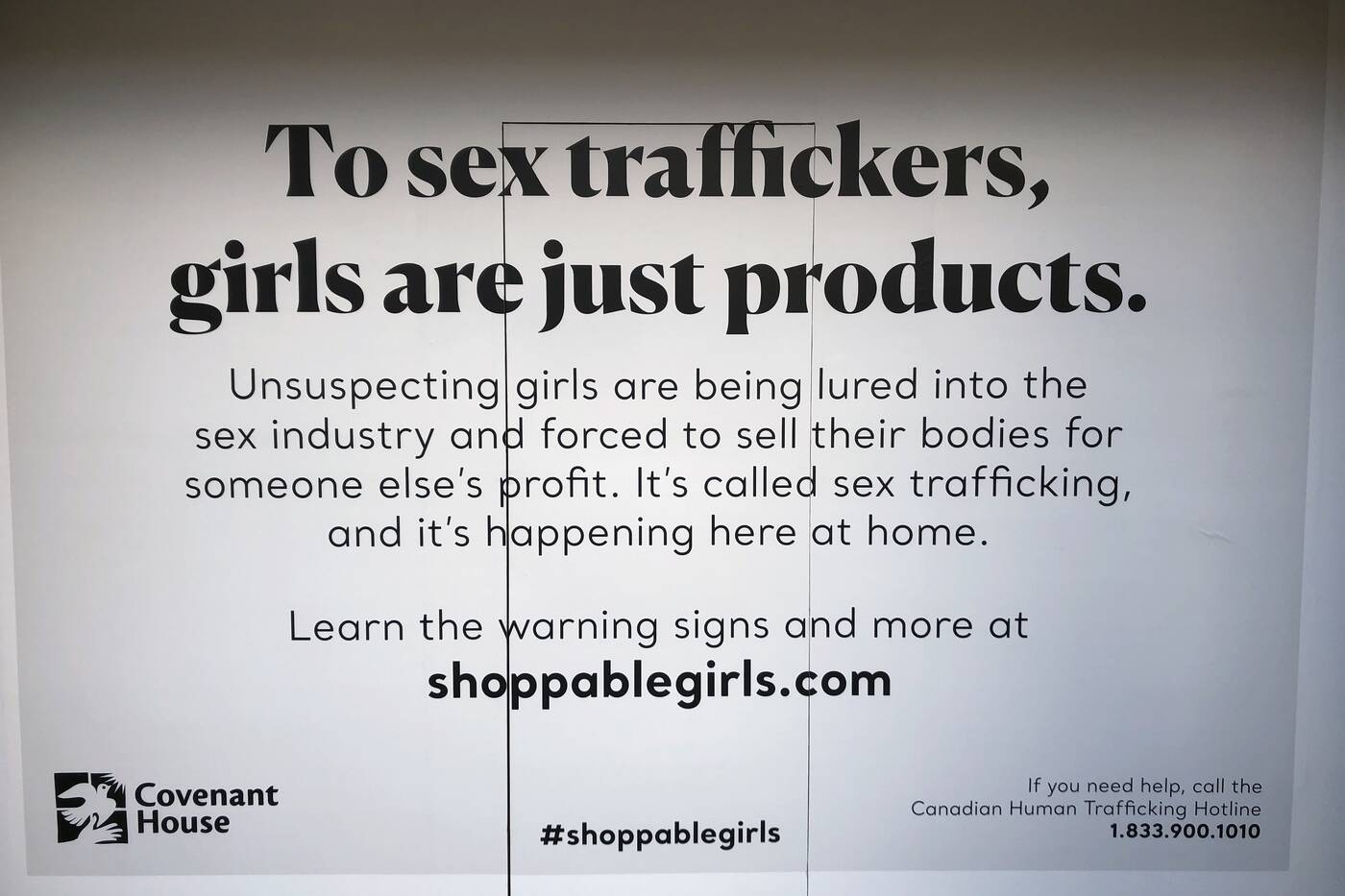 Sex trafficking is a lucrative, underreported and fast-growing crime in Canada, where teen victims are increasingly being targeted for recruitment through social media.

"No one chooses to be trafficked. And the truth is that it's happening in our communities, to our children and often right in front of us. Yet many times the signs go unnoticed by those in the best position to help," says Julie Neubauer, program manager of anti-trafficking services at Covenant House.

"We see an unfortunately high number of cases where a young child's vulnerable state was exploited and in many cases, they were approached through social media platforms," said Detective Sergeant David Correa of the Toronto Police Services Human Trafficking Enforcement Team in Covenant House's press release similarly.

"This is a domestic problem and our victims come from all walks of life and from neighbourhoods that represent all segments of the city," Correa continued.

"It's crucial that we all work together in identifying cases early as we are seeing victims as young as 13."