Technical colleges, mattresses in boxes, offers to make participate in medical research studies... the ads inside Toronto subway cars aren't always the most exciting to view, but some do catch the eye more than others.

Have you seen this poster recruiting people who suffer from Ragweed allergies on the TTC? One out of 10 Canadians are afflicted by such allergies, or so the poster tells me.

But the people pictured sneezing the ad not your average, sniffly-nosed Canadians.

They're two of the most-famous stock models in the history of the internet. 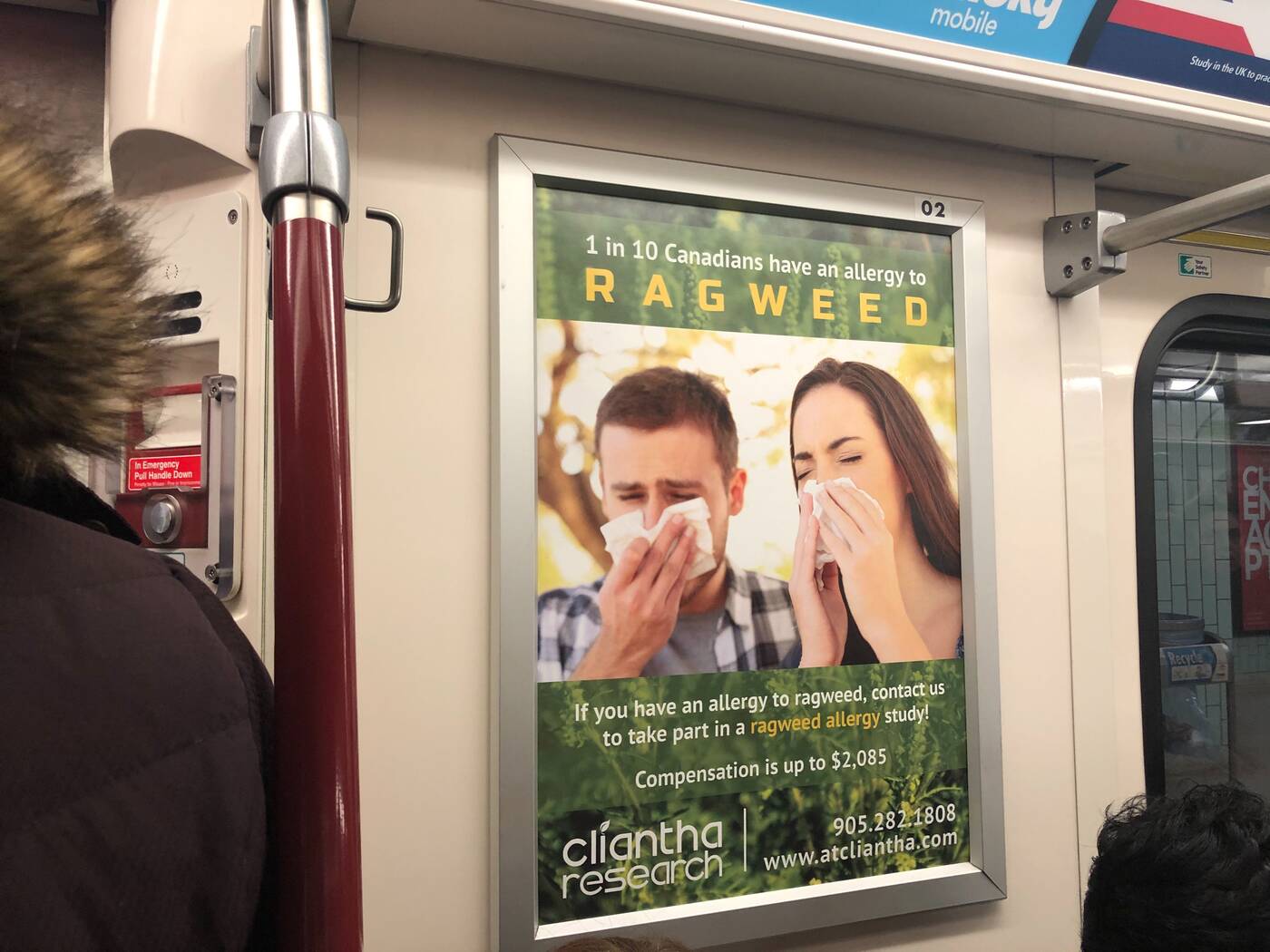 If you can't quite place them, here's another shot of the same two people (plus a third wearing red.) 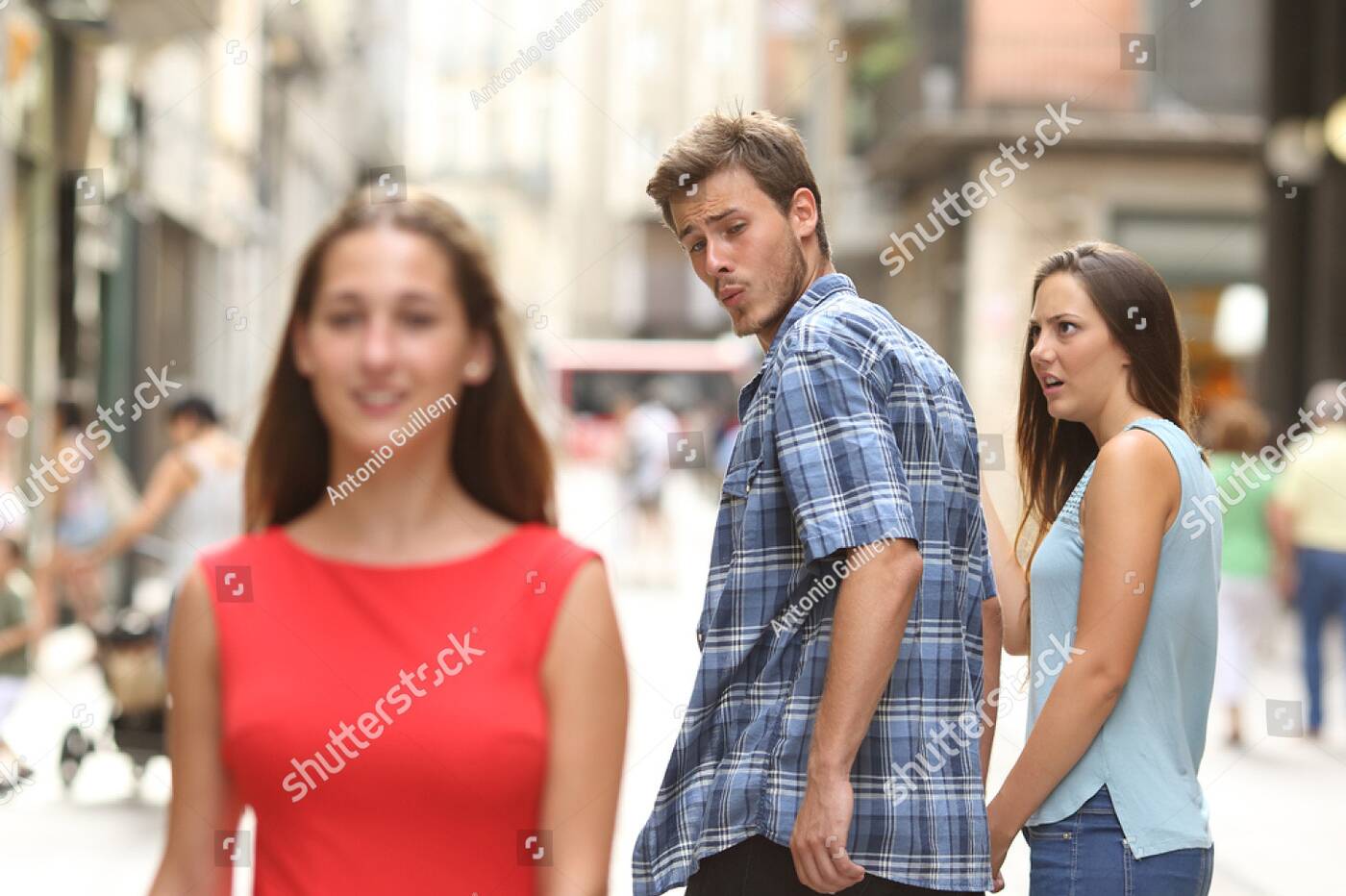 This simple stock from 2015 photo took on a life of its own in 2017 as part of the "distracted boyfriend" meme. Image proof via Shutterstock.

I know, I know, his hair looks different in the first photo, but I promise you that the couple sneezing in the TTC ad is the same couple about to have a serious chat in the image above.

Redditor CodeName80 was first to spot the familiar faces while riding the TTC, posting a photo of the ragweed allergy recruitment ad with the caption "Unfaithful Guy/Jealous Girlfriend made it on TTC" earlier this week.

Thanks to Shutterstock's "same model" feature — which allows users to search for images by person — I can indeed confirm that the subjects of the TTC ad's sneeze shot are those from the stock photo officially titled "Disloyal man walking with his girlfriend and looking amazed at another seductive girl."

Taken by photographer Anthony Guillem in 2015, the "disloyal man" photo has been shared widely online in recent years as part of an object labelling meme best known as "distracted boyfriend." You've likely seen it many, many times in various iterations.

The distracted boyfriend gets his eye turned by fascism pic.twitter.com/CSkWBeFsyi

The distracted boyfriend meme, which originated during the summer of 2017, has proven particularly infuential and culturally relevant as far as internet trends go.

Credited by Slate for popularizing the Object Labeling trend of the late 2010s online, the meme has spawned dozens of high-profile parodies and recreations in recent years, as well as numerous think-pieces about its use as a tool for social and political commentary.

It was even the subject of a formal ruling by Sweden's advertising ombudsman in 2018.

Thus, the appearance of these extremely recognizable people in a random TTC subway ad quite is giving commuters pause — and a reason to chuckle once they realize who it is they're looking at.

This is far from the first time that stock photo models "Laura" and "Mario" have made headlines for appearing in ads or publications outside of the distracted boyfriend meme photo.

It makes sense, given their line of work.

Between the two of them, Laura and Mario appear in another 8,859 photos on Shutterstock alone in the "same model" section for the photo used in Cliantha Research's TTC subway ad.

That photo, officially titled "Sick couple sneezing together covering mouth with wipes in a park," will likely never be as famous as Guillem's "Disloyal man walking with his girlfriend and looking amazed at another seductive girl."

Still, it's nice for the people of Toronto to have a little piece of IRL internet history displayed in an otherwise quite boring subway car.