Here's an idea for your Valentine's Day card this year: "My love for you burns as brightly as the fire that burned U of T to the ground in 1890."

It's not exactly romantic — in fact, the complete destruction of an entire library, and the 33,000 books inside it, classifies as a grade A heartbreak.

But it's safe to say the sparks were flying on the evening of February 14, 1890, when University College (the first constituent college of U of T, established in 1853) suffered the largest fire in the campus' history. 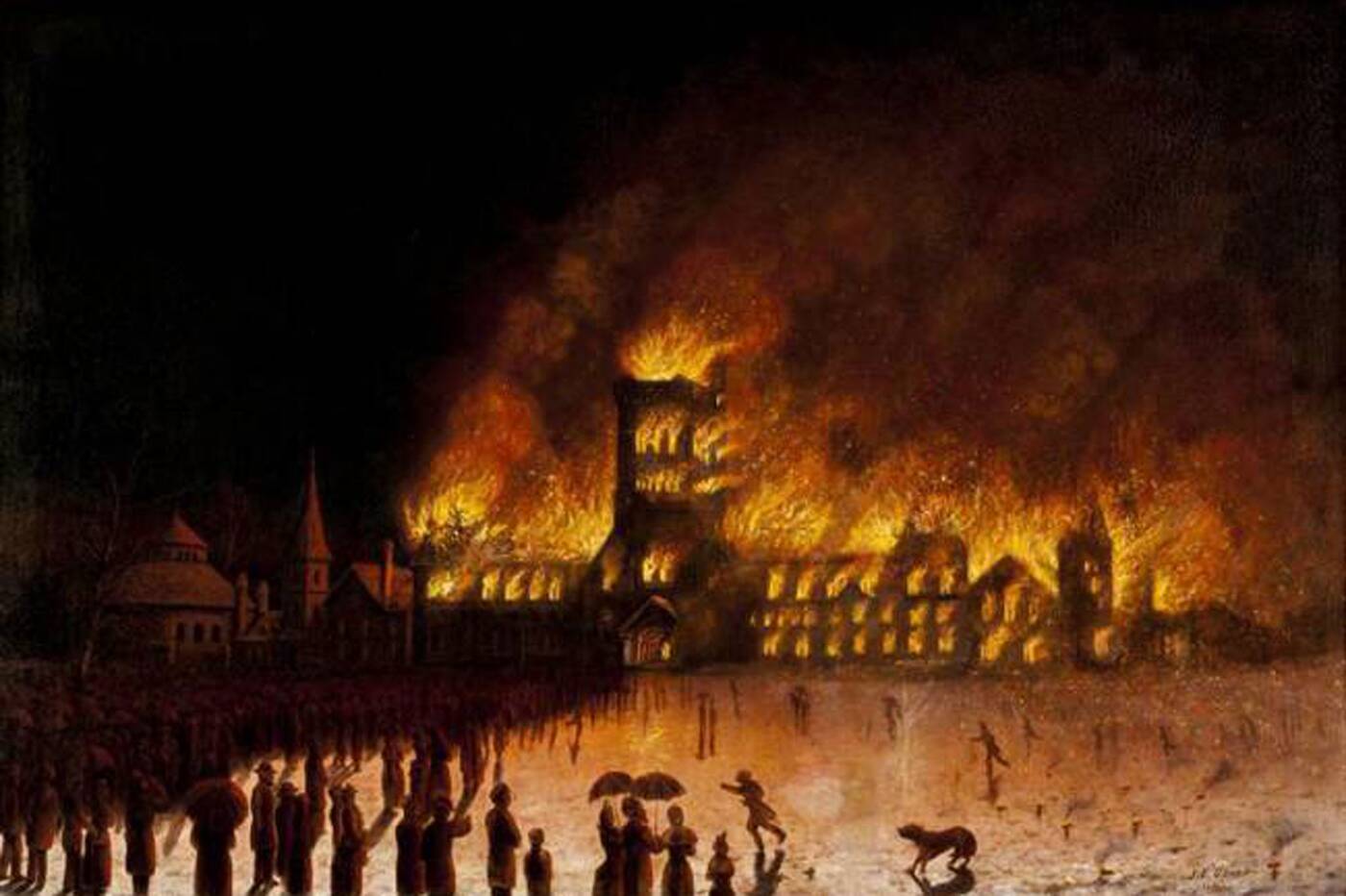 An illustration of the 1890 University College fire by John Edwin Usher. Photo via U of T Art Museum.

University of Toronto records set the scene 130 years ago, on the evening of an annual student ball. Picture it: Male students were wearing jackets with sleeves that are awkwardly short; women, who were only admitted to the college six years prior, are wearing shirtwaists and floor-length skirts. Ankles are taboo.

Around 3,000 people were set to take part in the coversazione, an event organized by the school's Literary and Scientific Society. By all accounts it was meant to be a joyous affair, including concerts, literary readings, and two travelling bands.

Sometime after 7 p.m., two servants were carrying a tray of burning kerosene lamps upstairs (thank God for modern-day electricity) when the tray was dropped to the ground, engulfing the wooden staircase in flames.

Toronto's entire fire brigade (which only consisted of two fire engines) was dispatched to the scene and miraculously managed to get the fire under control by 11 p.m. Thankfully, there were no casualties (though human remains were reportedly found beneath the stairwell during repairs). 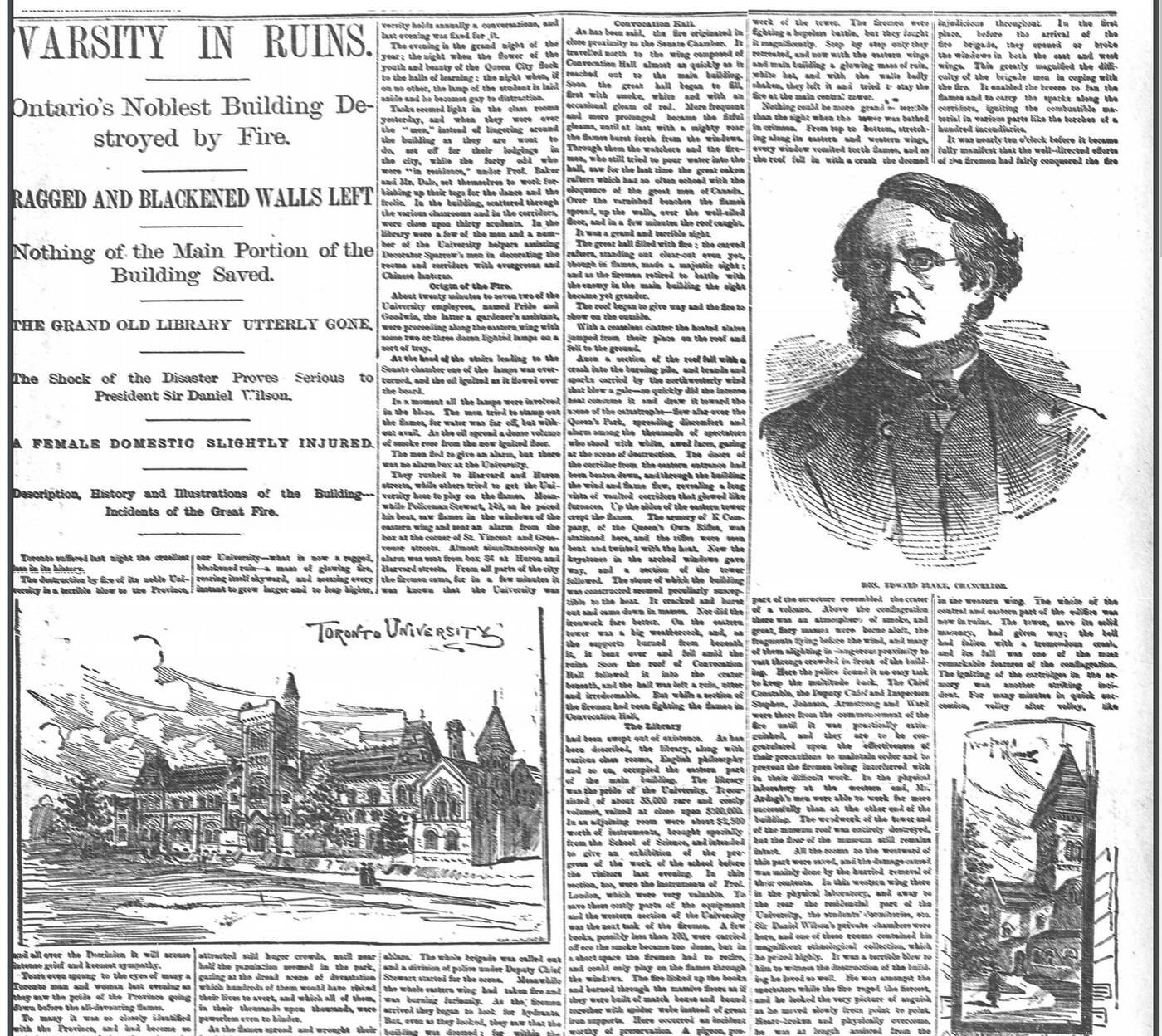 An article titled "Varsity in Ruins" in Toronto's Globe newspaper on February 15. Photo via Globe and Mail Archives.

While the college's Romanesque stone exterior survived, nearly all of the college's interior was destroyed, save for the Croft Chapter House and cloister wing. The central tower collapsed, the oak doors were obliterated, the onsite museum was destroyed, and the hanging bell fell and shattered on the ground.

The next day, on February 15, the Globe ran an issue titled Burning of the University. If you have a library card, you can access it through the Globe and Mail Historical Newspaper Archive's online database.

"The public loss by the burning of the University buildings cannot be estimated in terms of money. In some important respects, the misfortune is irreparable," read an article called Varsity In Ruins. 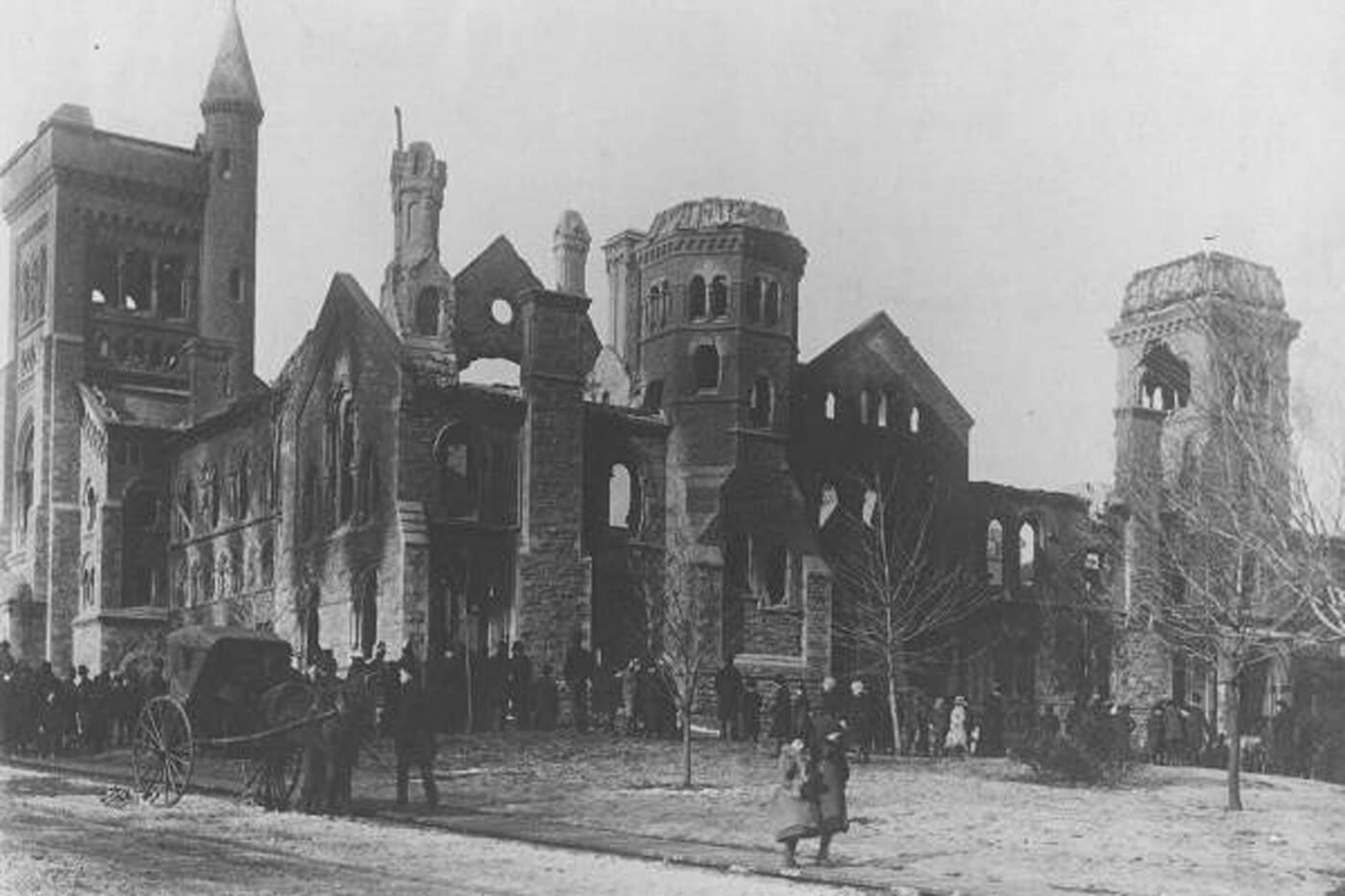 Only about 100 books and historical documents were salvaged from the fire, including the original university charter which established King's College, later named University of Toronto, in 1827.

Within two years, the building had been rebuilt under architect David Dick in the same style as the original building, thanks to an outpouring of donations and grants. Today, University College is one of two historic sites at University of Toronto.

The love metaphors abound with this one, but all I'll say is keep an eye on those mood-setting candles tonight.