Toronto residents are fighting back against illegal election signs

The Canadian federal election is officially in progress, and that means political parties are doing everything they can to secure votes.

Sometimes, that includes illegally placing campaign signs on the front lawns of those who didn't give their consent.

Now, Toronto residents are fighting back against the phenomenon, and one instance of this was posted to Reddit yesterday.

The post is titled "One Toronto Danforth household has taken a unique approach to the Conservatives mistakenly putting up a lawn sign at their address."

Residents of the Danforth house noticed a campaign sign for CPC candidate Zia Choudhary on their lawn, and they contacted elections Canada to have it removed.

When nothing was done, residents of the home took matters into their own hands.

On either side of the Conservative sign, they put up their own.

"They placed their sign on our land without our consent!" one of the signs reads, while the other tells passersby not to vote for this particular candidate.

Love this idea. So tired of seeing signs on empty lots and the edges of property. We can do better this election! https://t.co/uH5h58TjDL

Following the posting of this incident online, Choudhary actually responded, stating a volunteer knocked on this door last May and received approval to put up the sign.

Still, both residents maintain they never gave permission for the sign to be put up.

"Let me assure all of you that that never happened, or he has me confused with another house in the neighbourhood," a Facebook post from the homeowner states.

"Neither me or my partner would agree to this as we have a policy for no signs, even if it's someone we support." 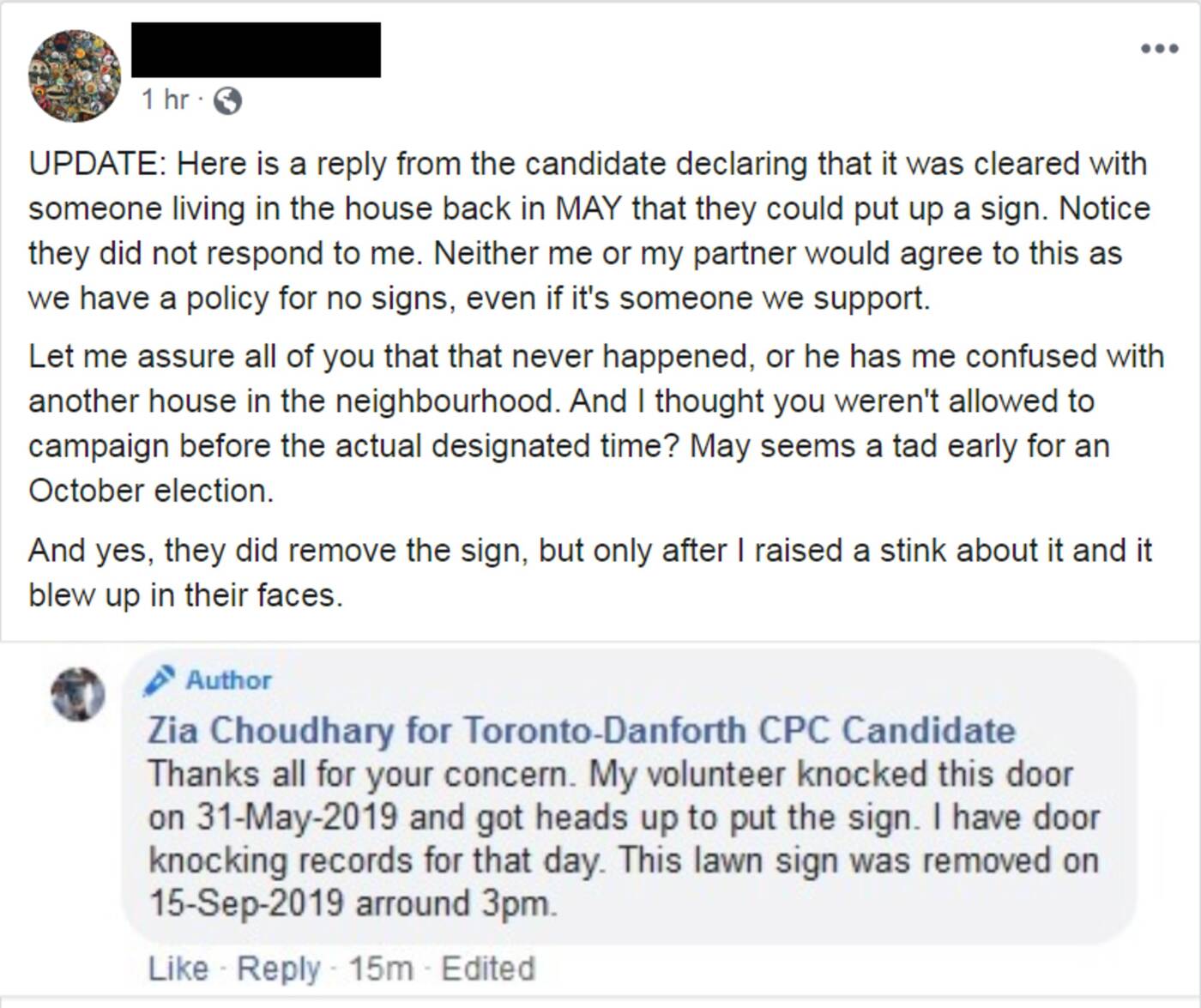 While this one particular instance was resolved and the sign was eventually taken down, comments on the original Reddit post prove this is not a one-time occurrence in Toronto.

"This happened a lot in Mississauga too, last year. The PC rep in my parents' riding was actually caught ripping up other MPP's signs repeatedly and replacing them with his own without proper consent," one user wrote.

"I live in Scarborough-Agincourt and a few days ago saw people ripping out Liberal signs along Sheppard and replacing them with Conservative ones," another added.

The Canadian election campaign has only been underway officially for about a week now, so there's no telling how many instances like this will arise before voting day on October 21.