University can be tough and there's no question that the occasional all-nighter is sometimes necessary, but should a school be outwardly promoting them?

That's the question many people are asking following the circulation of an ad for the Ted Rogers Master of Business Administration (MBA) program at Ryerson University.

The ad appears to promote overworking, and encourages "pulling an all-nighter to finish an undergrad term paper," "doing several all-nighters to launch your MBA start-up," and "expanding to new markets followed by weeks of sleepless nights." 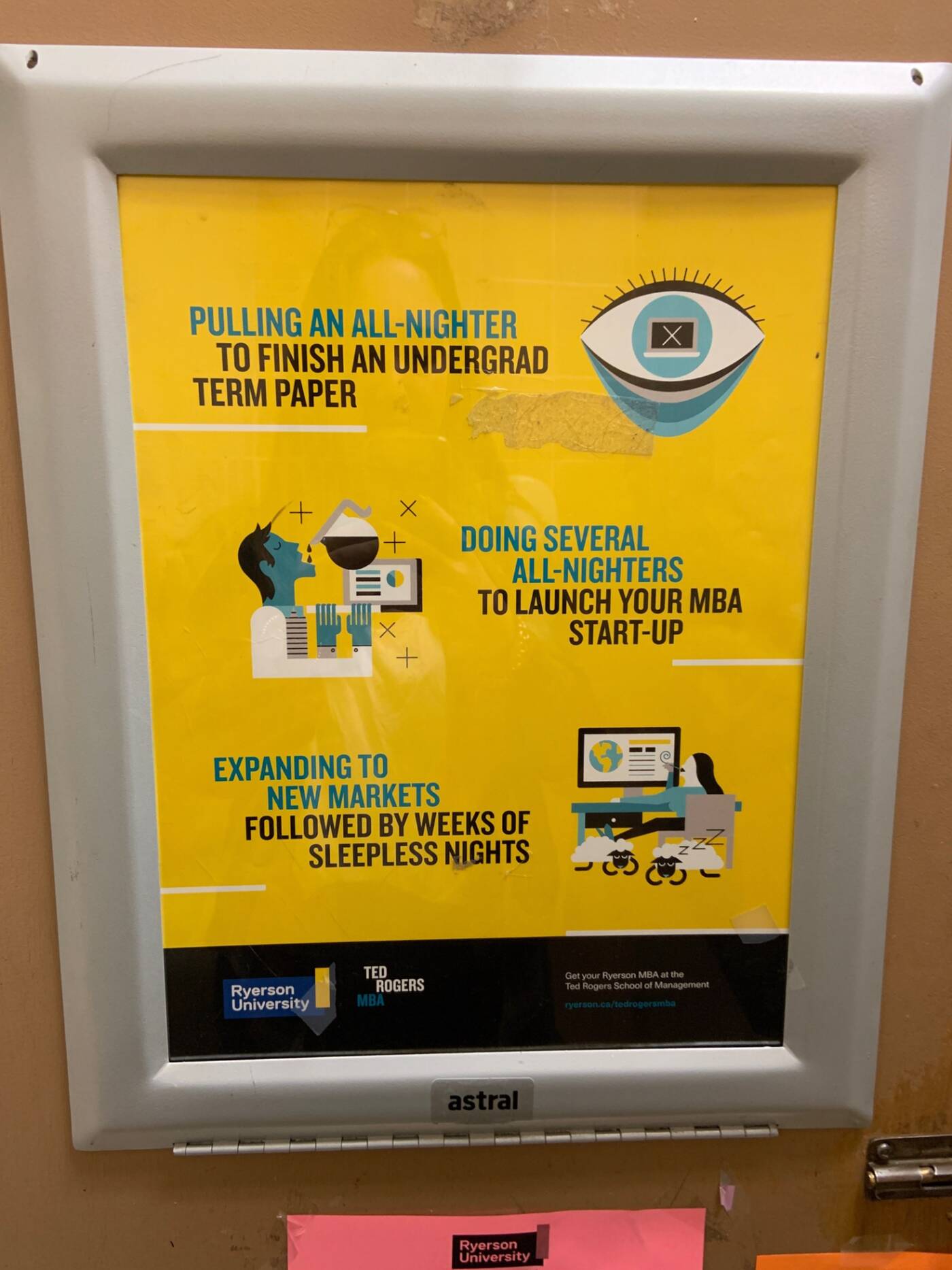 The Eyeopener, Ryerson's student newspaper, noticed the controversial ad and asked students to weigh in with their thoughts.

An editor and writer for The Eye, Tyler Griffin, posted about it in a Ryerson Facebook group, and the reactions were pretty unanimous.

"This poster makes me so incredibly mad," one student replied.

"With the rise of entrepreneur influencers, people tend to think that working 24/7 is the way to go.... without thinking that you’re a human who needs break to function at a high level ," another student wrote.

"With the popularization of entrepreneurship cultures (think Gary Vee on your social media), people now are aspiring to have that grind lifestyle, working 24/7.... but yo people listen, work smart not hard. Your brain & body need a break to function at a high level."

The Eye published a story about the ad in which a multitude of students and experts refer to it as "anti-mental health," they say it promotes unhealthy work habits, and "reinforces the ‘grind’ mentality."

And while it's clear that's the exact message this ad is sending, sadly it's nothing new.

Overworking is expected, hustle culture ⁠— which promotes long work hours without breaks ⁠— is the norm, and young people are constantly working themselves into the ground in the pursuit of success.

Give yourself permission to exist as you are, right now, and just breathe. Hustle culture tells us we need to be moving and pushing 24/7 to have value, but our value has nothing to do with the grind.

In January of last year, The New York Times published an article called Why Are Young People Pretending to Love Work?, in which writer Erin Griffith describes hustle culture as "obsessed with striving, relentlessly positive, devoid of humor, and — once you notice it — impossible to escape."

In February, Thrive Global published a similar piece called Why Are Millennials Buying Into Hustle Culture?, which emphasizes our current culture of overworking and how technology and social media exacerbates it.

You know, I've been working on this book idea around imposter syndrome for months.

And I'm starting to wonder if imposter syndrome is the SYMPTOM, and what I really need to be writing about is dismantling the insanity of hustle culture that social media has hyperaccelerated.

Also back in January, Buzzfeed writer Anne Helen Petersen wrote about millennials being "the burnout generation," and how burning out at a young age is no longer unusual.

Clearly the topic of conversation is not new, but a university blatantly promoting unhealthy work habits might just be a new low.

Corinne Hart, an associate professor at the Daphne Cockwell School of Nursing and expert in student mental health, told The Eye this kind of ad normalizes unhealthy behaviour and stigmatizes those who don't work at that level.

She also told The Eye that students who sleep less and work more are likely to have trouble focusing, making decisions and dealing with stress.

All of this is known to be true, and there are multiple studies that confirm how detrimental the effects of overworking can be.

But the question remains: how do we change a culture so obsessed with success and hard work that nothing else seems to matter?