At first glance, the TTC's schematic map — you know, that diagram of the subway you see at stations and in official city documents — is... fine? It's fine. It's whatever.

Through the eyes of a design pro, however, there's much to be improved in terms of readability, aesthetics and perhaps most importantly, accessibility.

Despite this, it hasn't been updated since 2013 — a fact that Toronto-based designer Anton Vinogradov finds both depressing and unbelievable.

"The original designer missed the chance to make something memorable," he wrote in a recently-published piece on Medium. "My main task today is to make the scheme not only aesthetically pleasing but easy to use for everyone."

"It does not matter if you are colour blind or have any other visual impairments," the piece continues. "The scheme must be accessible to everyone. Toronto is the most diverse city in the world, so let's consider everyone and raise the quality bar high."

A noble idea, but can it be done? According to Vinogradov, yes, but only if the TTC is willing to address everything from the overall visual perception to nitty gritty details such as the significant difference in travel time between identically-labelled interchanges such as St. George and Spadina.

"If the route is well-known for you, you probably know that the difference lies in the time and the amount of leg-work you would need to do had you chose the Spadina interchange," he notes. "Yes, from the first glance for a profane commuter it looks like you are saving on travel time, but it's not.

"Spadina has a long inter-station passageway which you will spend three to five minutes walking in," he continues.

"Probably not a good idea after a long workday. The scheme which I have designed is trying to answer the question with a hint on walking distance in minutes. Now you have to spend less time on mind-boggling puzzles." 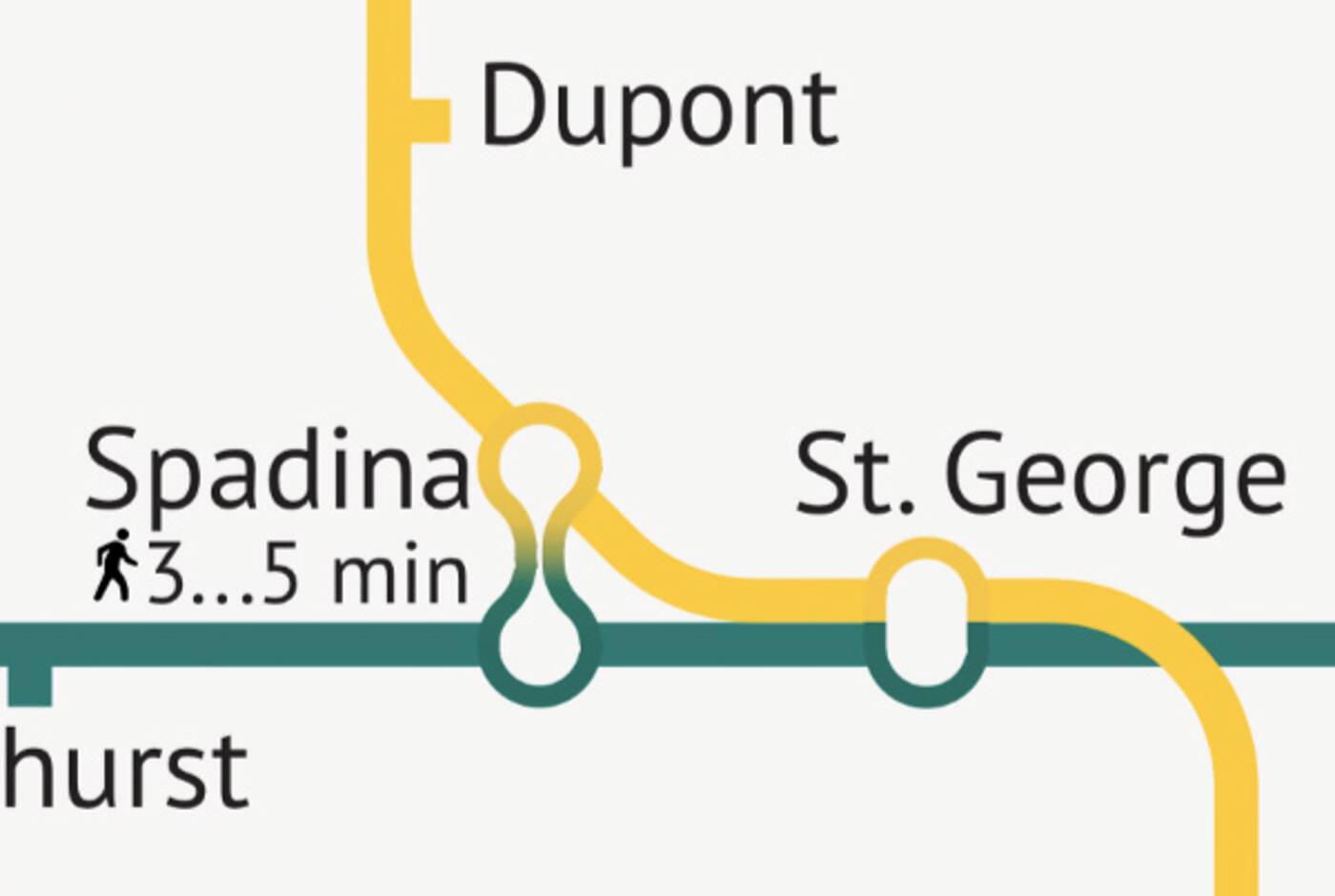 And then there are all of the janky, inconsistent design details.

"The way it is done now, there is no coherency between line weights, typography, colours, and station placement, which all cause fragmented discernment of the subway scheme," writes Vinogradov of the current map, which, as he points out, is more properly classified as a "scheme."

The station names along the Bloor-Danforth line are all tilted in the existing design, which the designer describes as "bizarre."

"The re-designed scheme does not have such a flaw. All the station names are oriented horizontally, which is natural for the human eye."

A horizontal name orientation would prevent commuters from needing to twist their heads on the subway. Image via Anton Vinogradov.

There's plenty more to read and learn about in Vinogradov's Medium page, but one of the most interesting elements pertains to colour blindness.

How is a commuter who is unfamiliar with Toronto's subway system to tell the difference between each line when they're only denoted by colour?

"In modern navigation, colour blindness or other visual impairments have not been paid sufficient attention as they deserve. To be fair, it is getting better every year, but we are not there yet," he says, explaining that his new map would implement numbered, high contrast lines with differences visible even in grey-scale."

"Colourblind people will have no issues with following the line paths. Even if they don't see the colour, they can quickly tell one line from another. Try it yourself."