With Valentine's Day now just one week away, matters of the heart are looming large in the minds of Torontonians—whether they're single, taken or somewhere in between (it's complicated, I know).

An estimated 82 per cent of Toronto residents between the ages of 15 and 29 are currently single, according to a report from the Berlin-based relocation platform Movinga, and if the city's online dating activity is any indication, they're ready as hell to mingle.

Working with the international expat community InterNations, Movinga recently polled 18,135 people across 187 different countries to determine which cities are the "best cities to find love." 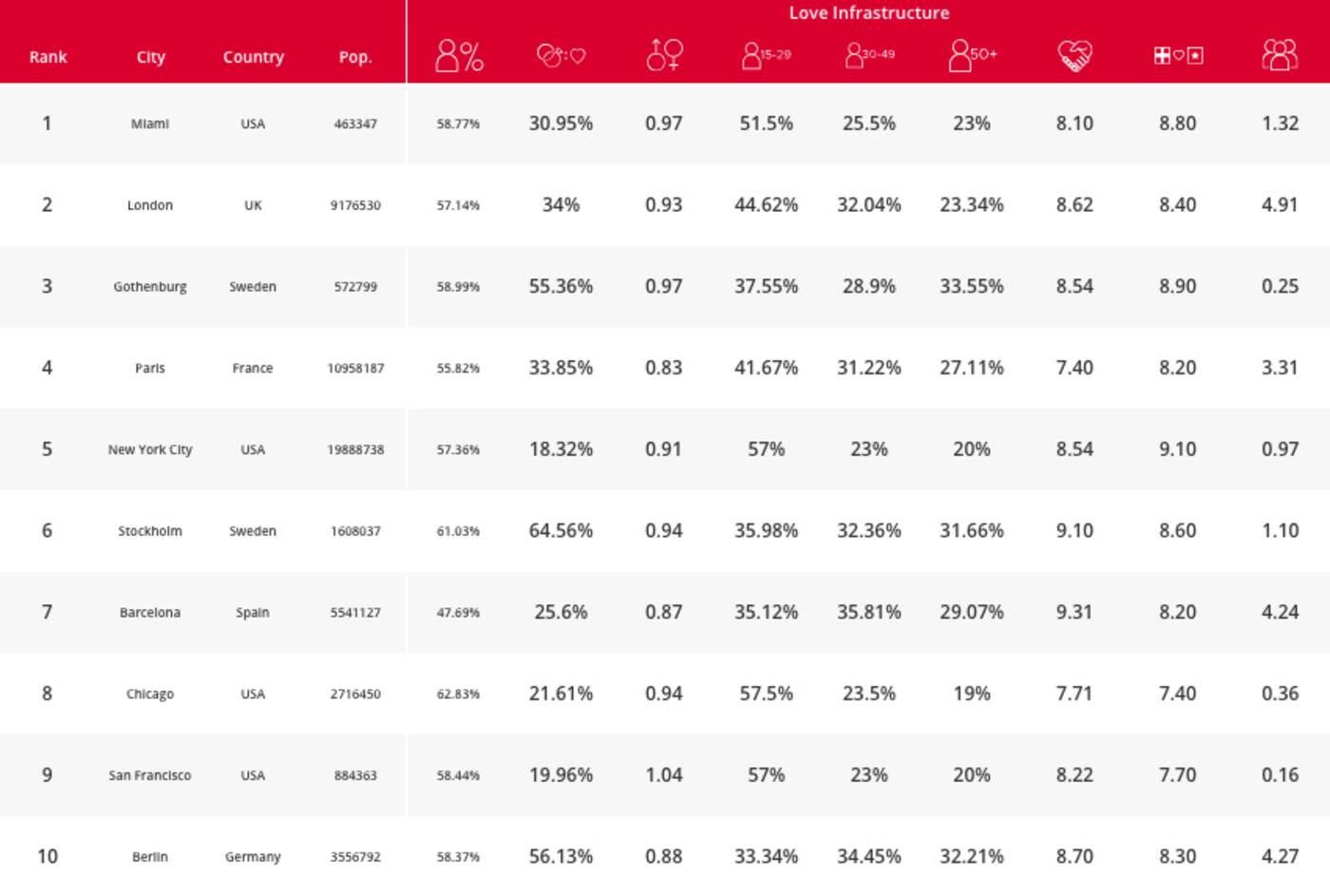 The top 10 best cities in which to find love right now, according to an international survey of nearly 20,000 people. Image via Movinga.

Toronto came in at spot number 24 out of 100 cities total, which isn't terrible given who beat us out (Miami, London, Gothenburg, New York and Paris led the pack, while cities in Nigeria, Iran and Saudi Arabia pulled up the rear).

In terms of Canadian cities represented on the list, however, Toronto fared best, beating out Montreal and Vancouver overall thanks in large part to an abundance of social opportunities and a high "online dating score."

The latter score was determined by asking respondents in all 100 "global, in-demand" cities how popular the use of online dating sites and apps (like Tinder and OK Cupid) are in their respective areas. Toronto came in second, trailing only San Francisco in terms of our swiping habits.

Movinga and InterNations looked at everything from 'love infrastructure' to marital status and average age of singles to determine which major cities hold the best opportunities for romance. Image via Movinga.

You can explore Movinga's interactive "cities of opportunity" chart to see how Toronto stacks up against other cities across a wide variety of love-related factors, including our ratio of male to female singles (0.81), sex positivity (7.6  out of 10) and LGBT freedoms (surprisingly poor at 6.6 out of 10.)

Also of note is what the survey learned about how men and women evaluate their love connections. Women appear to value "honesty" above all else in Toronto, while local men say that "temperament" is their top deciding factor.