Canada's public alert system for child abductions is in the spotlight once again this morning after a late-night Amber Alert jolted many Ontarians out of bed in a fit of panic.

An alert from Peel Regional Police went out to cellphones across the province around 11 p.m. on Thursday after an 11-year-old girl was reported missing by her mother. 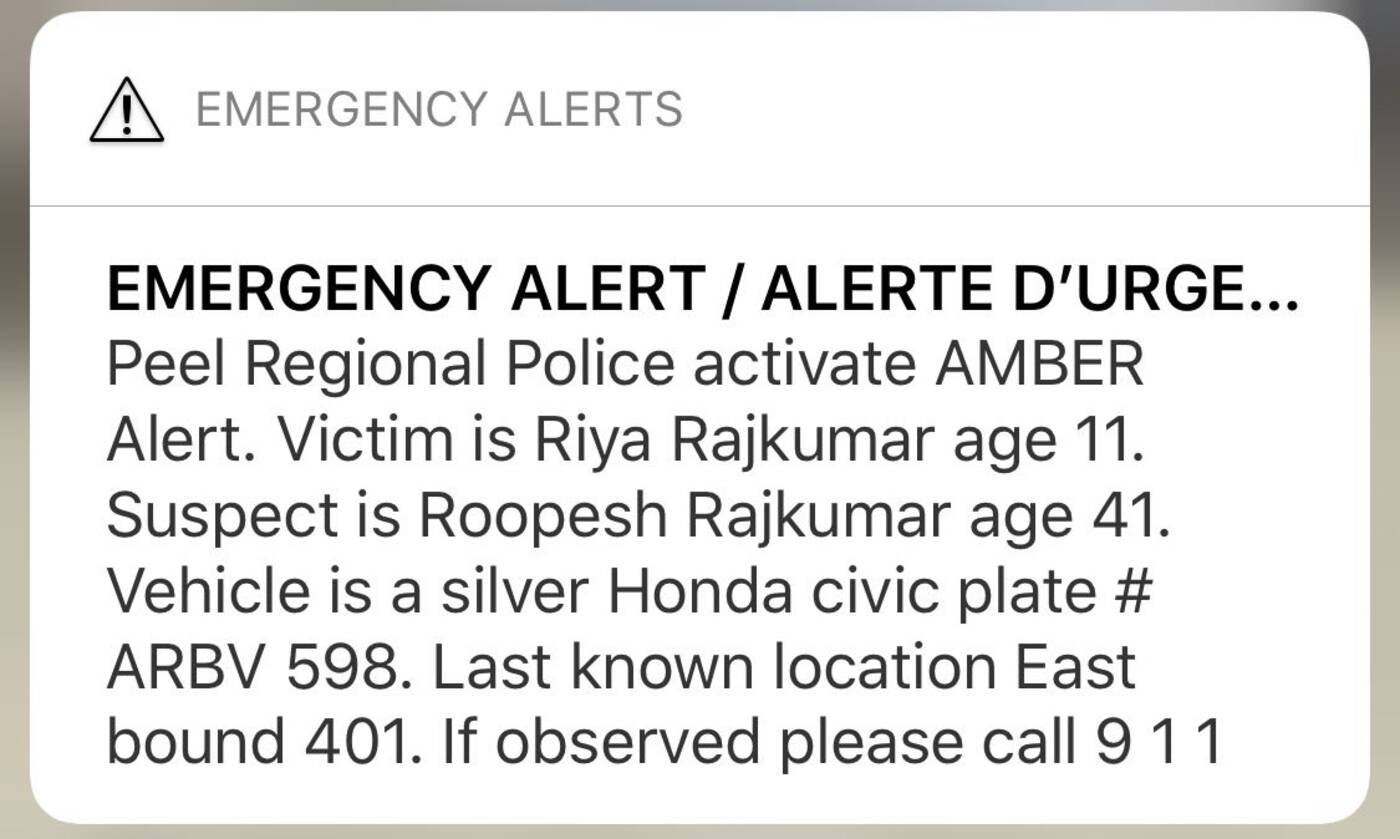 The Brampton girl had been picked up by her father, 41-year-old Roopesh Rajkumar, to celebrate her birthday that afternoon but didn't return home at 6:30 p.m. as expected.

Her mother notified police around 7 p.m. that she had received "concerning messages" from Rajkumar about harming himself and his daughter and the decision to put out an Amber Alert was made. 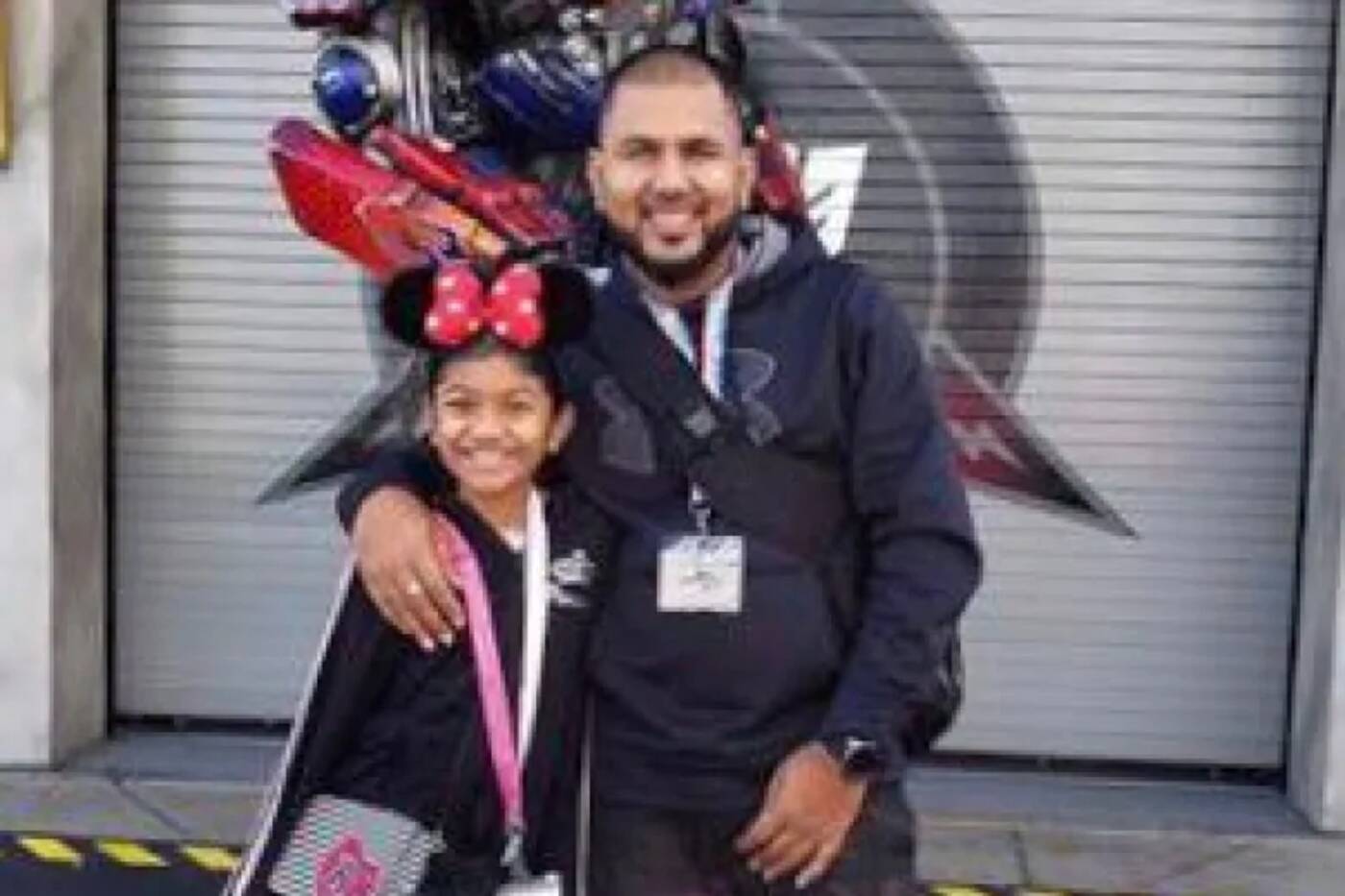 Suspected homicide victim Riya Rajkumar, 11, is pictured with her father Roopesh Rajkumar in this handout from Peel Police. Image via Peel Regional Police.

Sadly, just one hour after the alert went out, police found the lifeless body of young Riya Rajkumar inside her father's basement apartment in Brampton.

The Amber Alert was called off around midnight to the relief of many, who read on their phones that the child had been found. It wasn't until about half an hour later that police announced she'd been found dead.

So devastating to see that the reason that the Amber Alert was cancelled was because her body was found, and not because she was found save.
Rest In Peace Riya 💔

News of the tragedy is breaking hearts across the nation today, but news of how some people reacted to the initial Amber Alert is prompting incredulous outrage.

Seeing so many disgusting, callous tweets from some truly heartless assholes about last night’s Amber Alert.

How inconvenient it must have been for all of you to be woken up by the alarm, while a poor little girl was being murdered by her dad.

Faith in humanity is at -17 today.

"I can't even begin to describe how disappointing and upsetting it is to read the comments, emails and calls to our communications bureau complaining about receiving an Amber Alert late at night," wrote Peel Police Media Relations Officer Cst. Akhil Mooken on Twitter early Friday morning.

"I appreciate that a lot of people were sleeping but the immediate need to locate the child outweighed the momentary inconvenience that some people encountered," Mooken continued.

"Tragically, this incident did not have the outcome we were all hoping for, but the suspect was located as a direct result of a citizen receiving the alert and calling 9-1-1. The system works"

Hey folks, maybe target that anger at being awoken by an Amber Alert on ending violence against women and girls.

I simply cannot fathom seeing an alert that a young girl is missing and thinking "why the fuck did you wake me."

Your ability to ignore this violence is gross.

Rajkumar was arrested in a high-risk takedown not long after his daughter's body was discovered, according to police.

A motorist who'd seen the Amber Alert recognized his silver Honda Civic and called 911. Ontario Provincial Police found the man on Highway 11 near Orillia more than an hour away from his home.

The missing girl at the centre of last nights #AmberAlert has been located deceased in a house in #Brampton. The suspect, her father was spotted in #Barrie by motorists who notified local #police. @PeelPoliceMedia say investigation may take days @CBCAlerts #BreakingNews #homicide pic.twitter.com/KuzL4W3sqV

Rajkumar has been transferred into the custody of Peel Regional Police but charges have yet to be filed.

A homicide investigation is now underway.