The whole world just fell in love with this Toronto cat

A mysterious feline, some curious office workers, and 19 post-it notes are reminding the world today of why we all joined Twitter in the first place, back before Cheeto Jesus used the platform to taunt North Korea.

Every day I stare out the window @shopify at a cat in someone’s apartment. Weeks ago @_myles and I asked what its name was. Today they obliged and weve never been happier. pic.twitter.com/NKkMN9ViD4

Erika Strong works in marketing at Shopify's office near King and Spadina, where she and her co-workers have a prime view of some beautiful downtown Toronto condos.

One building, straight across from Strong's office, is home to several cats who enjoy sitting in the windowsills of their respective units. They're not there all the time, but when they do display their feline beauty, it's a treat for all involved.

"One cat in particular, an adorable (smush face) cat, would come sporadically," said Strong by phone on Thursday. "When he is there we notice him and get excited."

"We would always talk about him in our pod and wonder what his name is," she continued.

So, just before the holidays, they decided to ask. 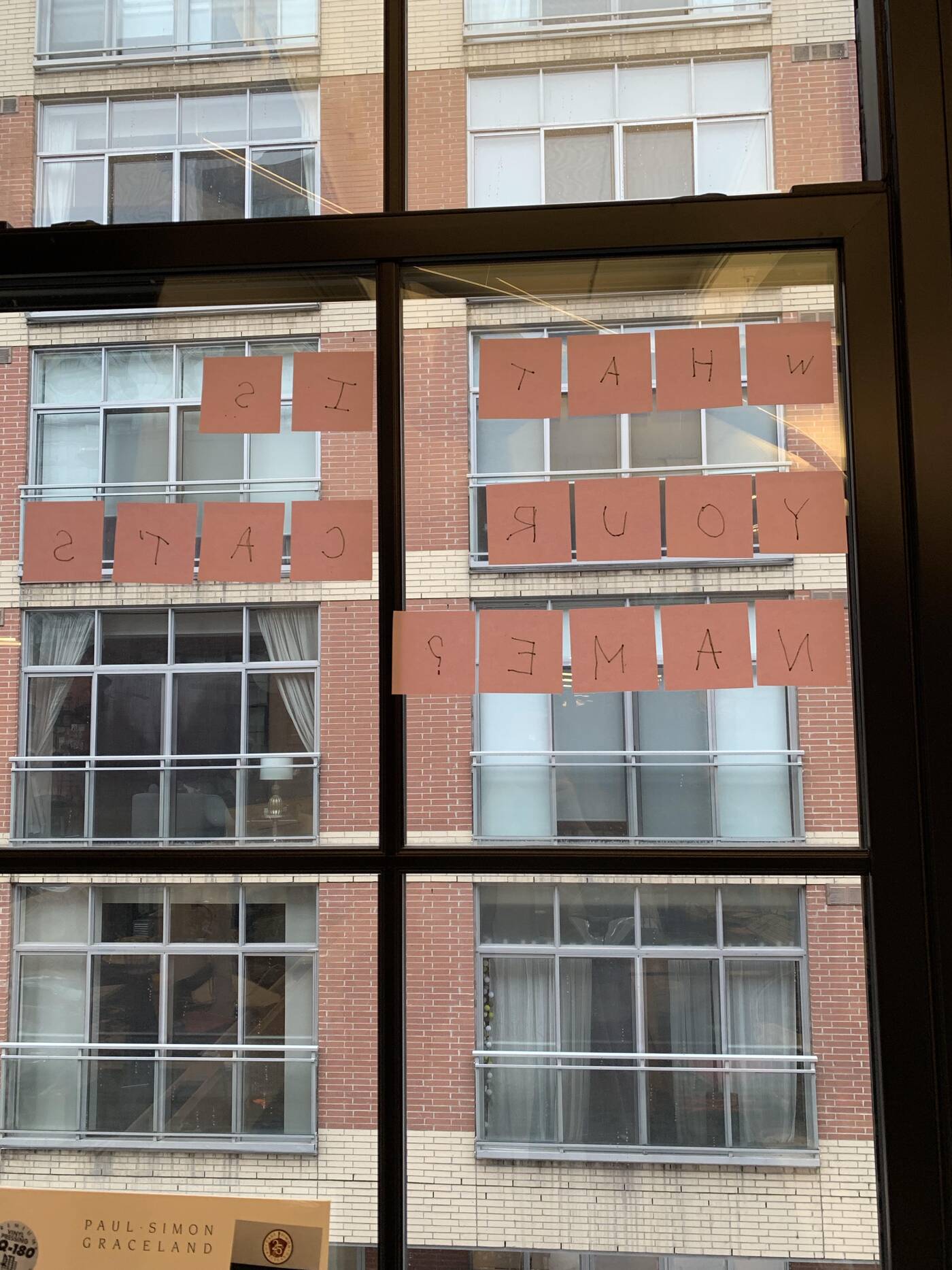 Strong and her colleague Alison Fleming laid out the simple query in post it notes on a window facing the condo.

Then, they waited. And waited. For at least six weeks. In fact, they'd all but forgotten about the post it notes by the time they got a reply on Wednesday.

"I died," said Strong. "I freaked out. Everyone was so excited because they all knew we'd been waiting."

People on other floors in the building who'd similarly admired the cat (which this reporter believes to be a ragdoll) even went so far as to thank her for finding out more about him. 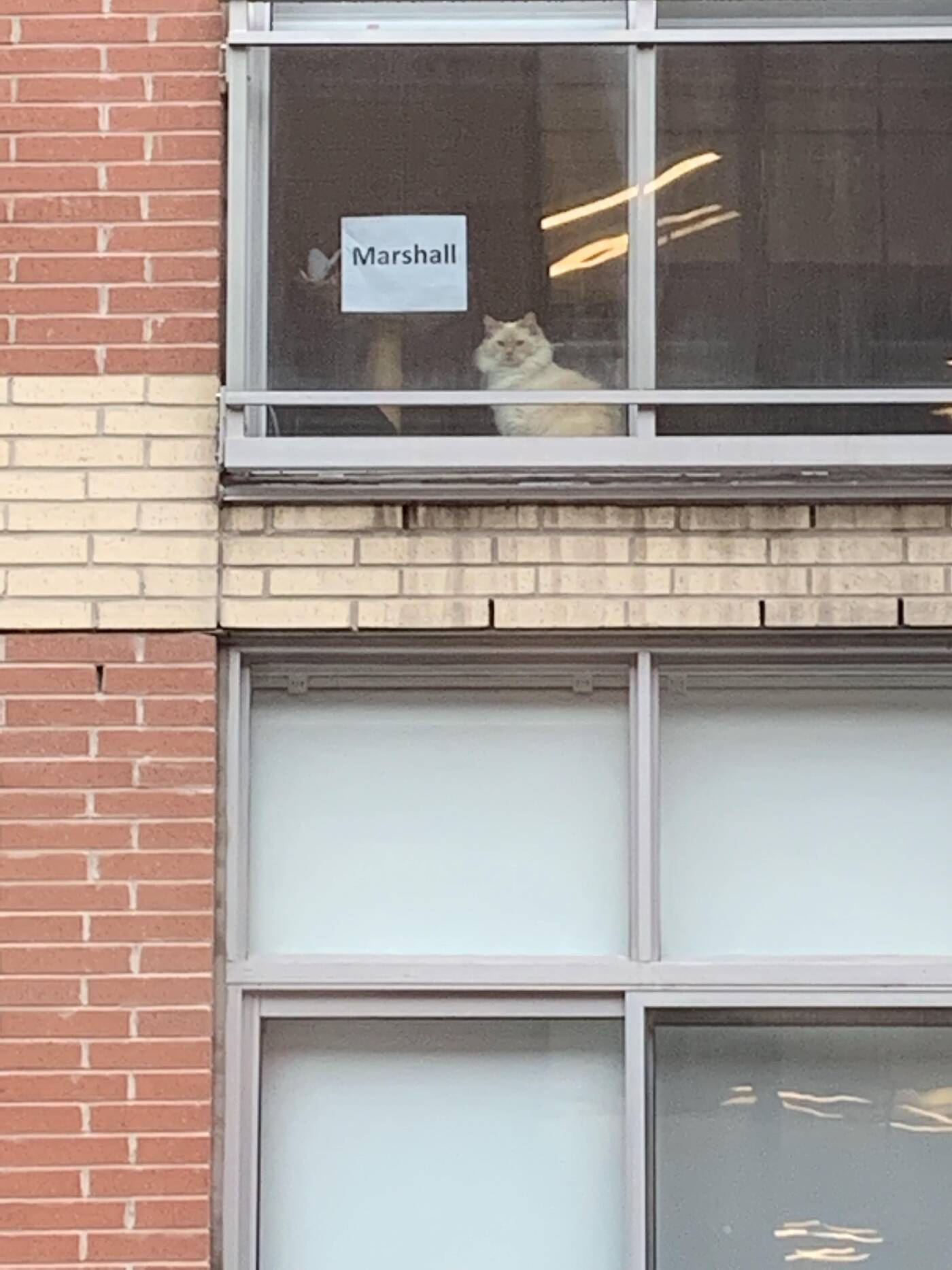 He's a natural born star, in other words, which brings us to part two of Marshall's story.

Excited to finally get a reply from the cat's owner, Strong tweeted out some photos and told her followers about what had happened on Wednesday morning.

This is the greatest thread I've ever read. Thanks for keeping me informed of Marshall's existence.

The experience of going viral has been "bizarre," according to Strong, who tweets all the time but says she rarely gets any sort of engagement.

She doesn't quite understand how the tweet exploded so quickly (nobody famous has given it an RT, to the best of her or my knowledge) but is pleased to report that 99 per cent of reactions have been positive—a rare thing in today's troll-laden Twitterverse.

Strong has posted a follow up poll to ask her new fans what the next question for Marshall should be ("Like, after Eminem?" is winning by a landslide) but says she likely won't actually post anything else on the window.

"It's been really fun and special," she says. "I don't want it to falsely continue for some reason. She does, however, want whoever Marshall belongs to to know that their cat is now huge on Twitter.

"I do want to let the person know that this cat is famous," she said. "I really want to make sure that he or she's aware of that."

Should Marshall's cat mom or cat dad miss this important news coverage, Strong has put up a new sign displaying a URL that links to her viral tweet.

Patiently waiting for Marshall to return to the window and find out that he’s finally made it. pic.twitter.com/NjI39a7Dva