Someone created a TTC subway map with only accessible stations

Getting from point A to point B using public transit can be hellish, especially when you factoring in things like delays, overcrowding and... you know, other people.

Imagine if there were also restrictions in place that meant you couldn't get on or off the train at almost half of the subway stations in Toronto?

For people with disabilities or injuries that prohibit them from taking the stairs, moving throughout the city can not only be uncomfortable, but sometimes impossible.

The TTC subway is one of the easiest ways to travel downtown Toronto. But, if you’re in a wheelchair it can be challenging. 35 stops are NOT accessible, therefore sometimes the subway is NOT an option #maketoaccessible #disability #inaccessible #ttc #subway #toronto pic.twitter.com/EoO8vWQ7e2

The TTC is constantly working to make public transit more accessible for everyone, and has indeed made quite a lot of progress in that regard since the 1990s.

TIL that these lines of tiles on the subway platform are not for decoration. They are textured to help visually impaired people navigate the platform with their cane. Awesome! #ttc #tysse #yorku #cnib #blind #accessibility https://t.co/XfQab4jSX9 pic.twitter.com/05xrpcTGUt

All TTC buses and bus routes are currently equipped to serve passengers using wheelchairs, walkers and other mobility devices, as are subway trains — but only 43 of the system's 75 stations have elevators (something, it should be noted, that the transit agency hopes to fix by 2025).

Toronto-based landscape architecture graduate Natascha Hufgard has compiled a map based on the TTC's own public information to highlight how much harder it is for those with limited mobility to ride the subway.

"TTC Map with only accessible stations," they wrote when sharing the image. "How would your day change if this is what your map looked like?" 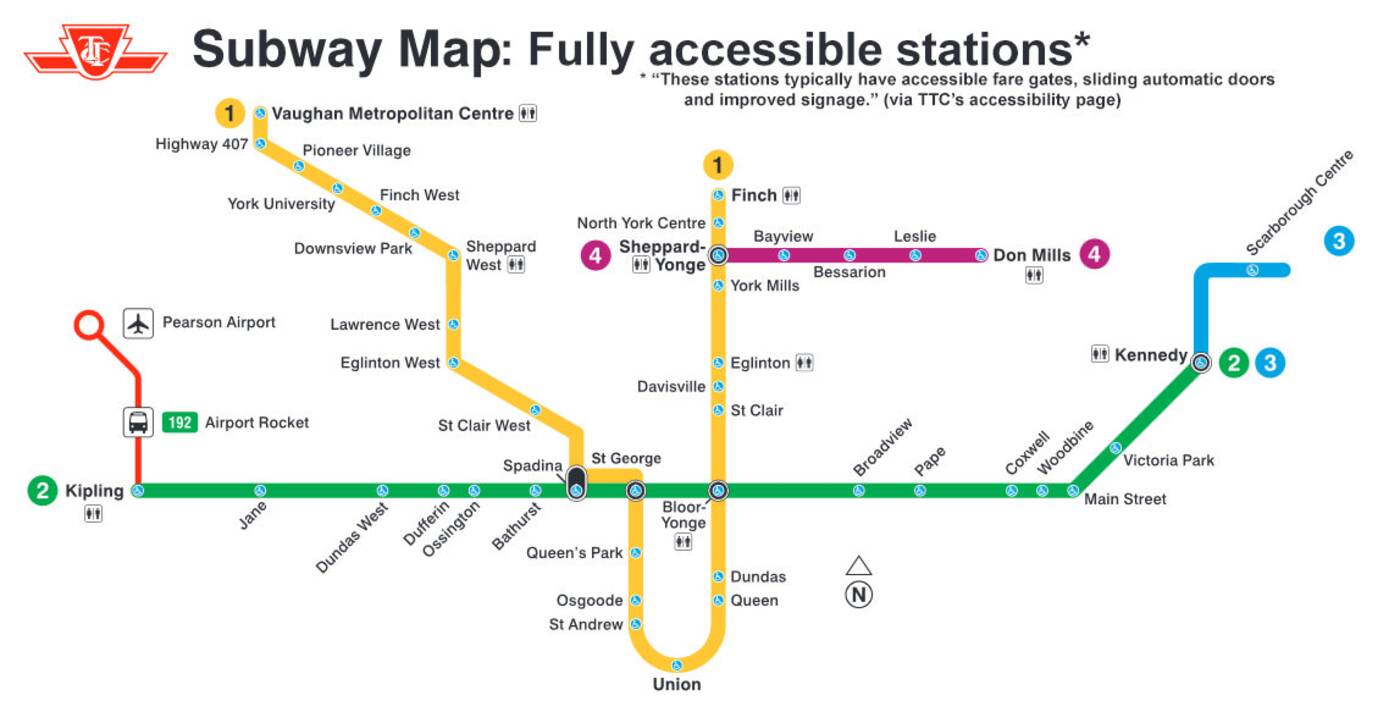 This version of the TTC subway map shows the only stations at which elevators are available. Image via Natascha Hufgard/Reddit.

"You should update the map with elevators that are down for maintenance lol," replied one commenter, raising an important point.

"If a staircase were completely unusable at a station, a lot of passengers would be extremely upset that they had to reroute and potentially miss important transfers or meetings," said Hufgard.

And yet I am forced to lose my independence because you are not fully accessible. #AODA means nothing to the #TTC. @PRESTOcard can stop using a wheelchair user in their ads, it is offensive.

This modified map is making many in Toronto think today about what it it's like to live in a world where taking the stairs isn't always an option.

For the estimated 3.8 million adult Canadians who report being limited in their daily activities due to a disability (as of 2012), it's just the way things are right now.