An email sent to Ontario Parks earlier this month suggests that Premier Doug Ford and his PC party have banned the mention of anything related to climate change on the government agency's social media channels.

A photo of the email in question was shared with us this week by an Ontario Parks employee who wishes to remain anonymous.

The employee says that the original message came through last Saturday. It appears to have been sent by Ontario Parks Social Media Coordinator Anne MacLachlan to staffers at the agency's Peterborough headquarters. 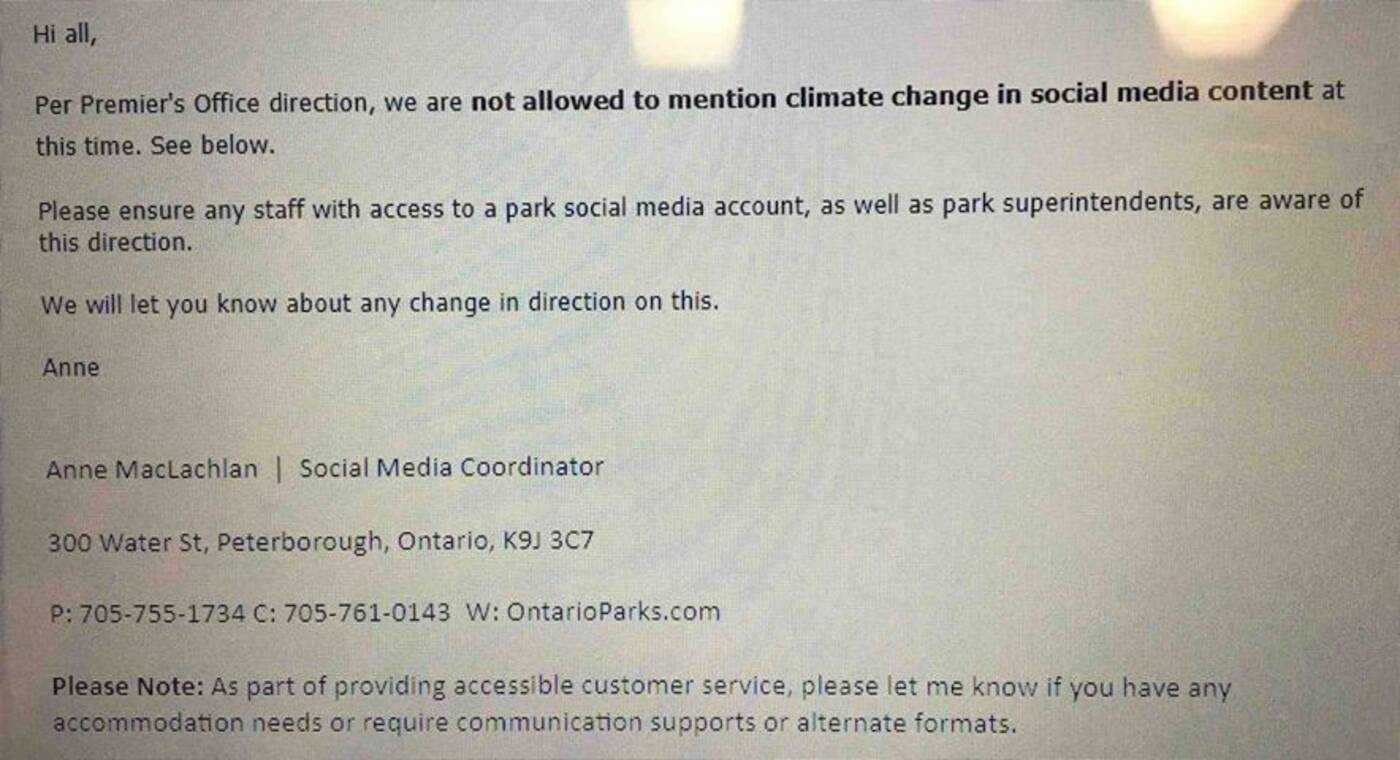 An email in which Parks Ontario staffers are advised not to mention climate change in social media content. Image via anonymous source.

"Hi all," it reads. "Per Premier's Office direction, we are not allowed to mention climate change in social media content at this time."

"Please ensure any staff with access to a park social media account, as well as park superintendents, are aware of this direction," the email continues. "We will let you know about any change in direction on this."

McLachlan has not yet responded to multiple requests for comment or to verify the email, nor has Ontario's Minister of Environment, Conservation and Parks, Rod Phillips.

Lovely! Looking forward to hearing about Ontario’s plan to reduce the effects of climate change now that the gov has abandoned cap and trade...

Laryssa Waler-Hetmanczuk, Executive Director of Communications for the Premier's Office, said that she has never given direction not to mention climate change in social media posts.

"I'm responsible for communications, including social media, for the Premier's Office," she said in response to questions about the Ontario Parks email. "I'm not sure who said this or why, but it's categorically untrue."

When asked if she thought the email was fake, she said "I don't quite know why they said this. I’ve never interacted with Ontario Parks directly."

Did you know Ontario's provincial parks help strengthen the resilience of the Canadian environment to #climatechange? https://t.co/SqPSkvZcR4 pic.twitter.com/XxI0HLrysx

A search of public tweets from the official Ontario Parks account shows no recent mentions of the term "climate change" — which is kind of weird for an agency dedicated to conservation.

The last tweet on this subject was sent out April 6 and reads "Researchers believe the shrinking gray jay population is due to #climatechange."

A verified Twitter account for Ontario's Ministry of Environment, Conservation and Parks similarly stopped tweeting about climate change on May 8.

Hi there, Ontario is committed to developing a new plan to address climate change going forward.

Searching the Ontario Parks website for "climate change" pulls up about 850 different pieces of content, however, and the government's own website maintains a climate change section that says "we are committed to developing a new plan to address climate change in fall 2018."

The official Ontario Government Twitter account also addressed the issue on July 18 by replying to a question about climate change with "Hi there, Ontario is committed to developing a new plan to address climate change going forward."

That account hasn't tweeted anything else about the pressing environmental issue since May 4. Premier Doug Ford's account contains no tweets mentioning climate change, ever.