Toronto police put a damper on 420 festival outside City Hall

Thousands of marijuana enthusiasts are celebrating 4/20 today under a cloud of smoke - and the watchful eye of Big Brother - at Nathan Phillips Square in Toronto.

It's the last major 420 event to take place in the city before cannabis becomes legal at the federal level in Canada, making it a unique enough celebration on its own - but it's also a bit more dramatic than usual, as organizers were unable to secure a permit for the space. 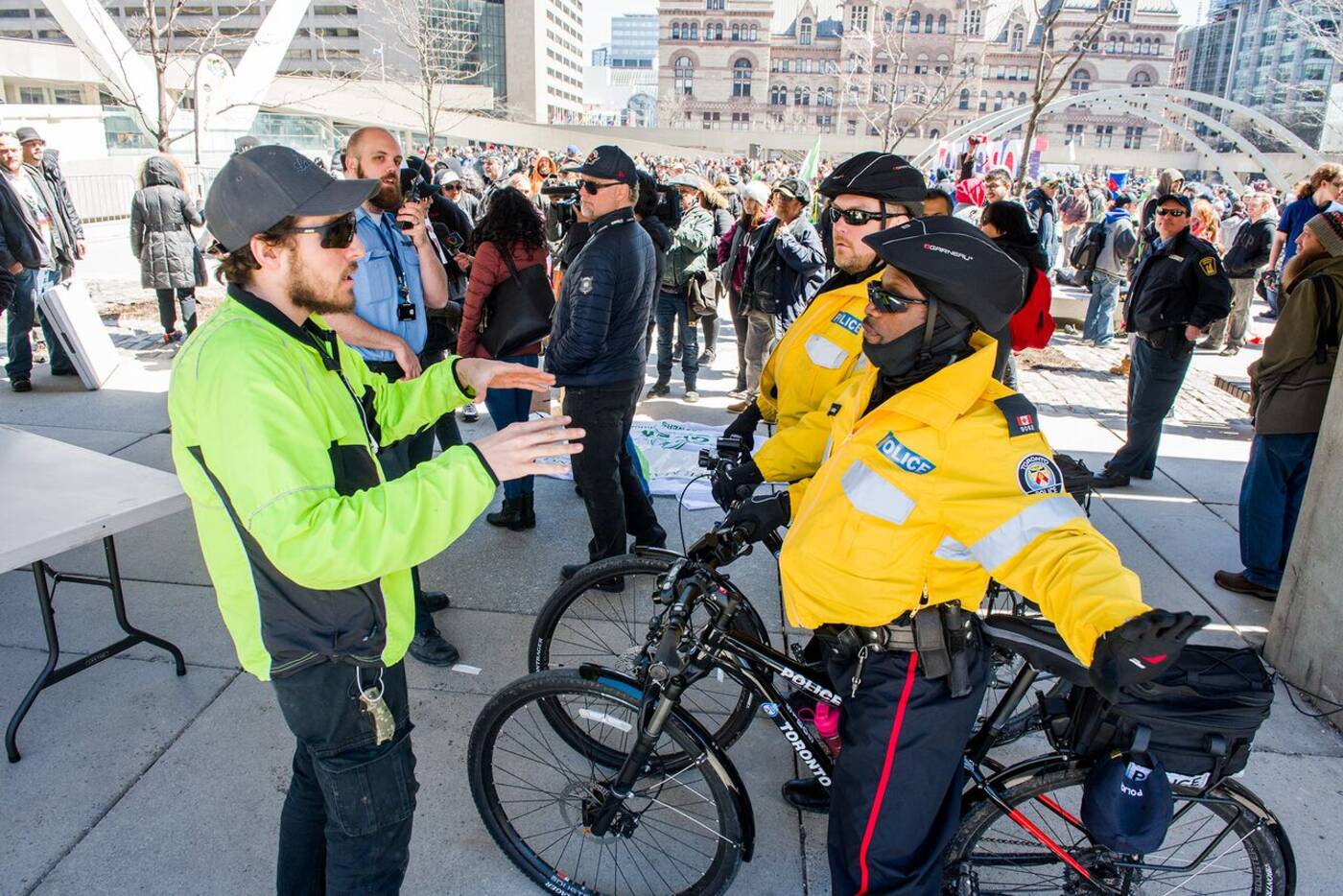 Police officers on bikes were stationed around the square, but also spoke to attendees when necessary. Photo by by Hector Vasquez.

420 Toronto had originally hoped to bring live music, food trucks, speakers and vendors of all kinds to the square today for the annual event, which had been running for the past 11 years at Yonge-Dundas Square.

The City of Toronto wasn't on board, however, and formally denied their request for a permit twice.

TPS spokesperson Meaghan Gray said that police were aware of the unauthorized event heading into Friday afternoon, and that officers would "be in attendance to ensure a peaceful and safe event."

Indeed, officers are present —large groups of them in yellow jackets on bikes — and for the most part they're just chilling back and letting people do what they want.

The mood is a bit less festive than it could be, though, with bike cops and City of Toronto security guards shutting down anyone who looks like they're trying give away or sell goods.

#Toronto police are making vendors put away their tables at the 420 event in Nathan Phillips Square because they don't have a permit to be there https://t.co/1FuEmViflu pic.twitter.com/QqgYCWVgbB

"It's very disappointing and disheartening to think that the city wouldn't embrace something that they're going to be taking hundreds of thousands, if not millions of tax dollars from," said a 37-year-old attendee who goes only by the name Fletcher.

"I just think the police need to get on board or get the f--k out of here. The federal government is on board, so get the hell out of the way, because this is here to stay." 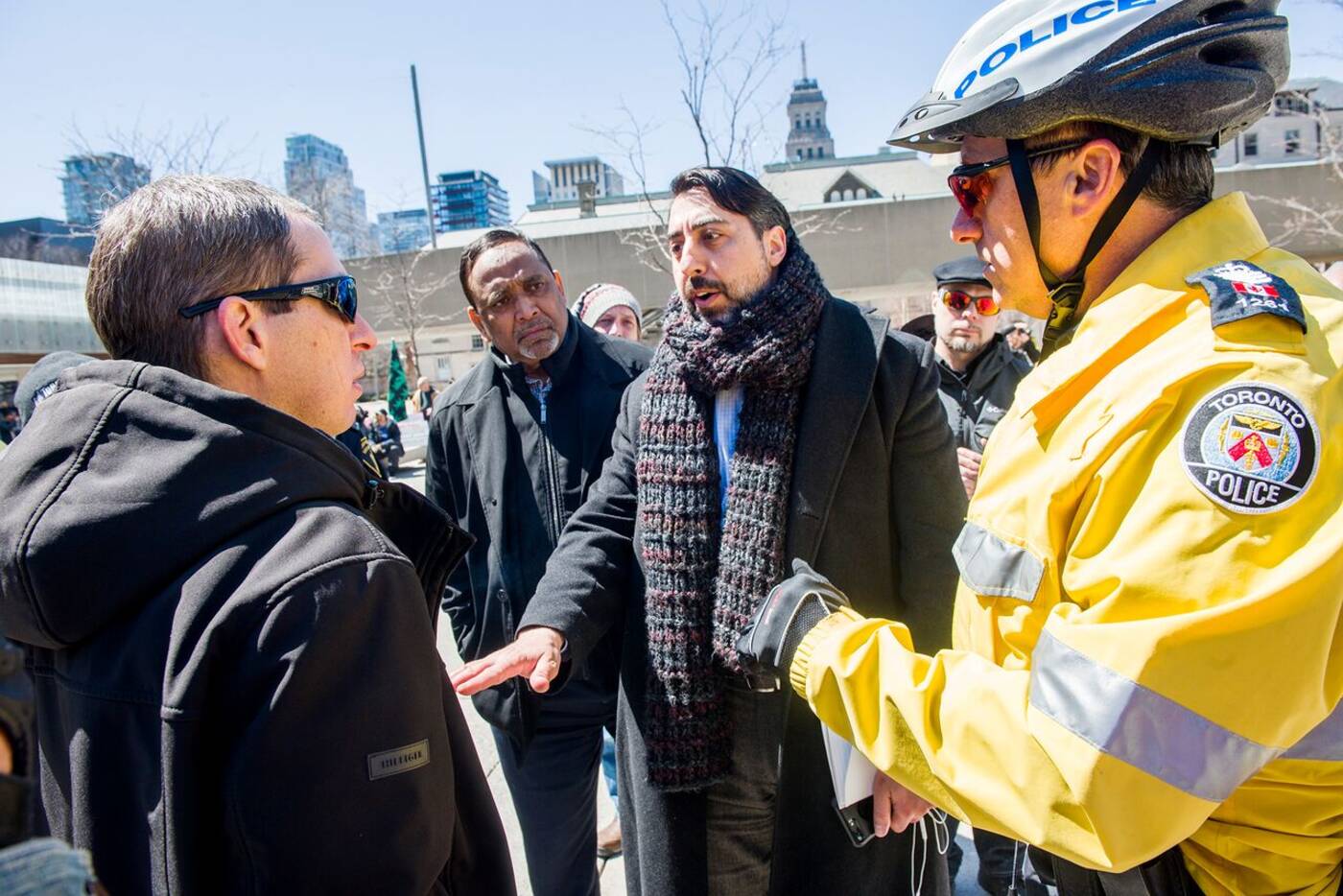 Another attendee, Dave, 58, asked a security guard why he was telling vendors to pack up their tables.

"Well, you know, I can't just set up a table in your back yard," explained the guard in relation to permits.

"Yeah, but this isn't your back yard!" replied Dave. "I pay for this. This is a public space!" 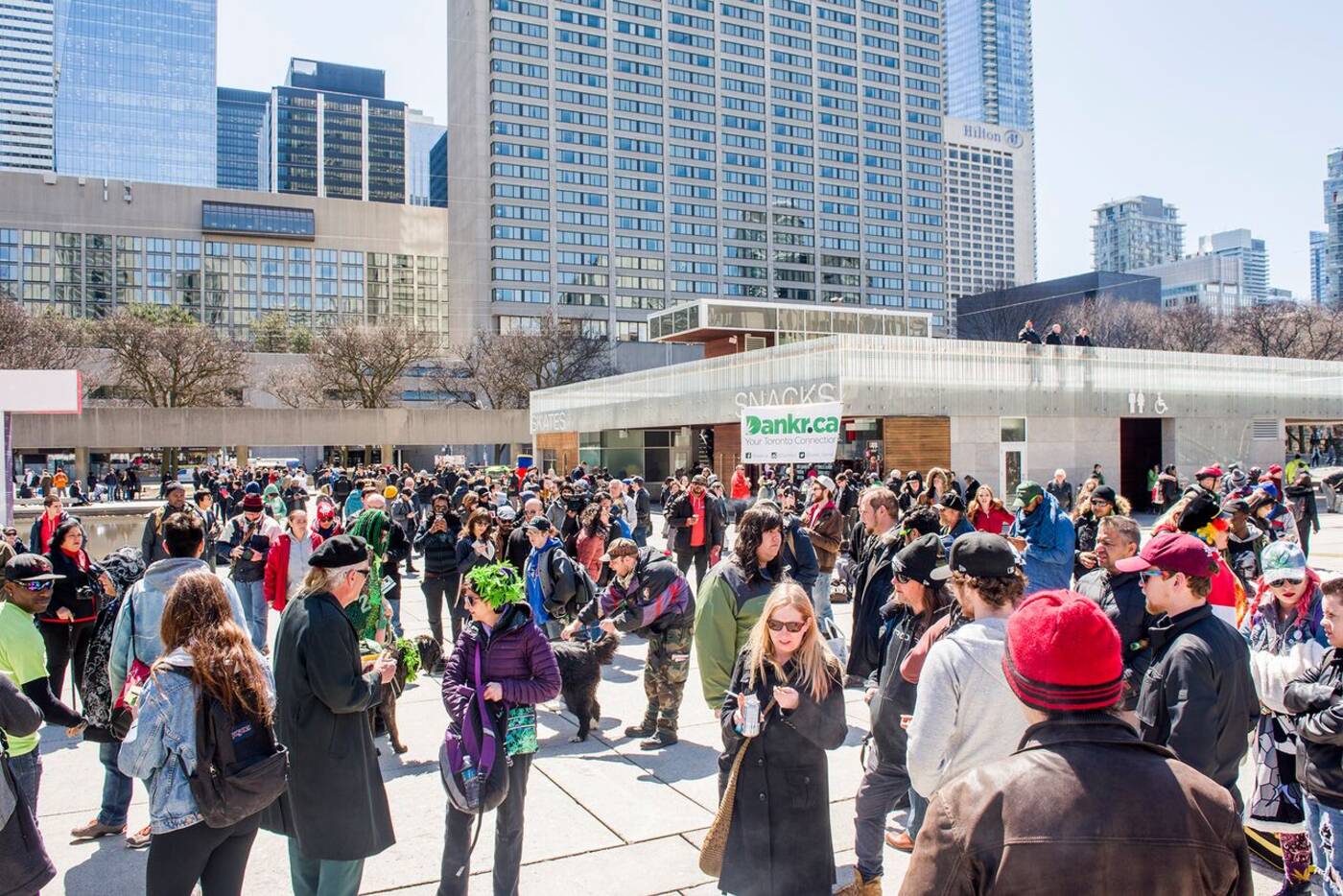 To be fair, police officers and security guards alike have been nothing but polite by most accounts.

"Excuse me guys," said one guard talking to a group of people in chairs that were giving away edibles. "I'm sorry but you can't do that or give it out here." 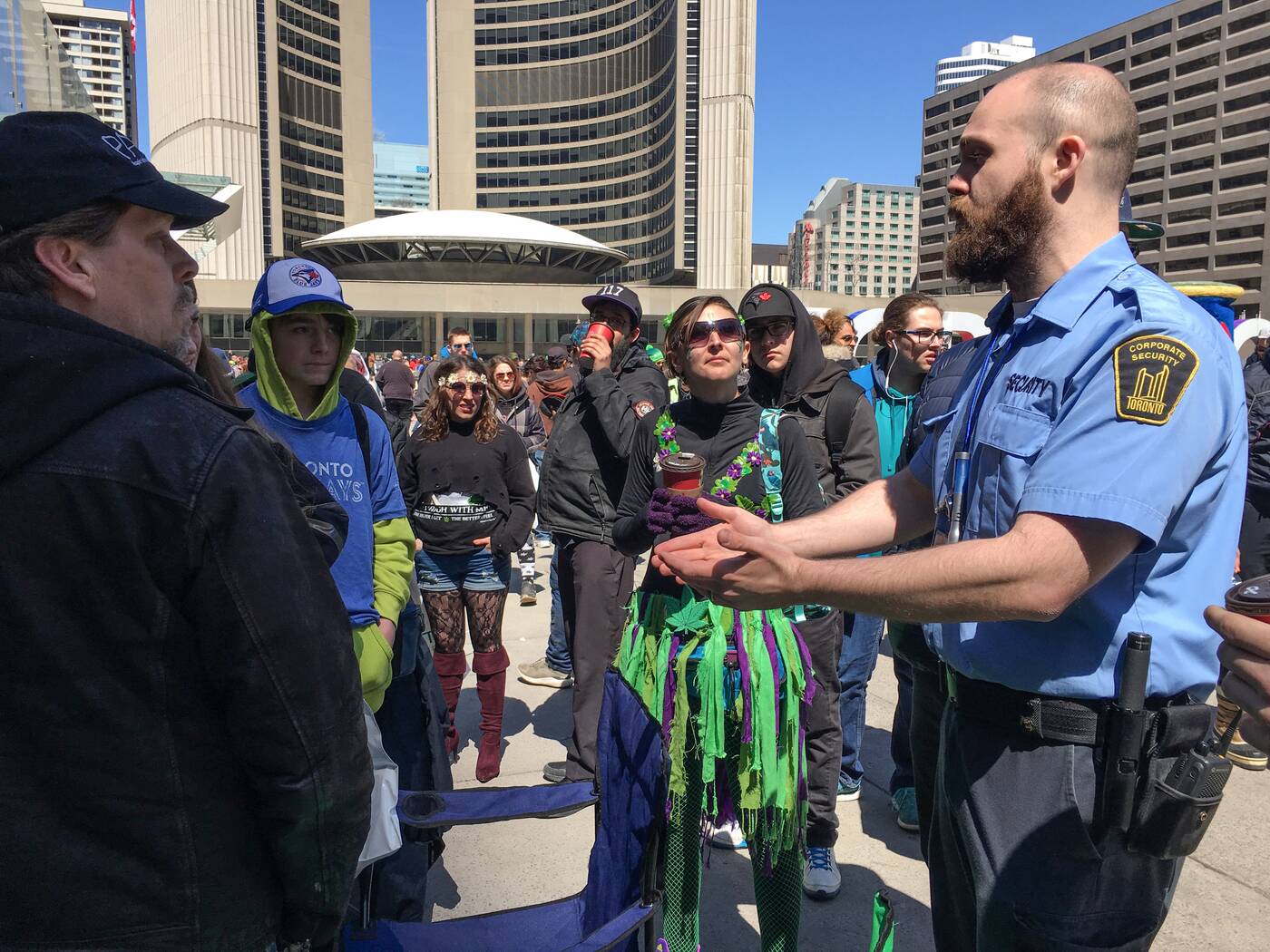 The guard told attendees that they were welcome to sit and celebrate the event — that he had no interest in stopping their fun, he just needed to enforce the bylaws that prohibit sales without a permit.

The group packed up and went off into the crowd without incident.

"Happy 420!" said one of the young women as the guard turned to walk away. He nodded his head and smiled. 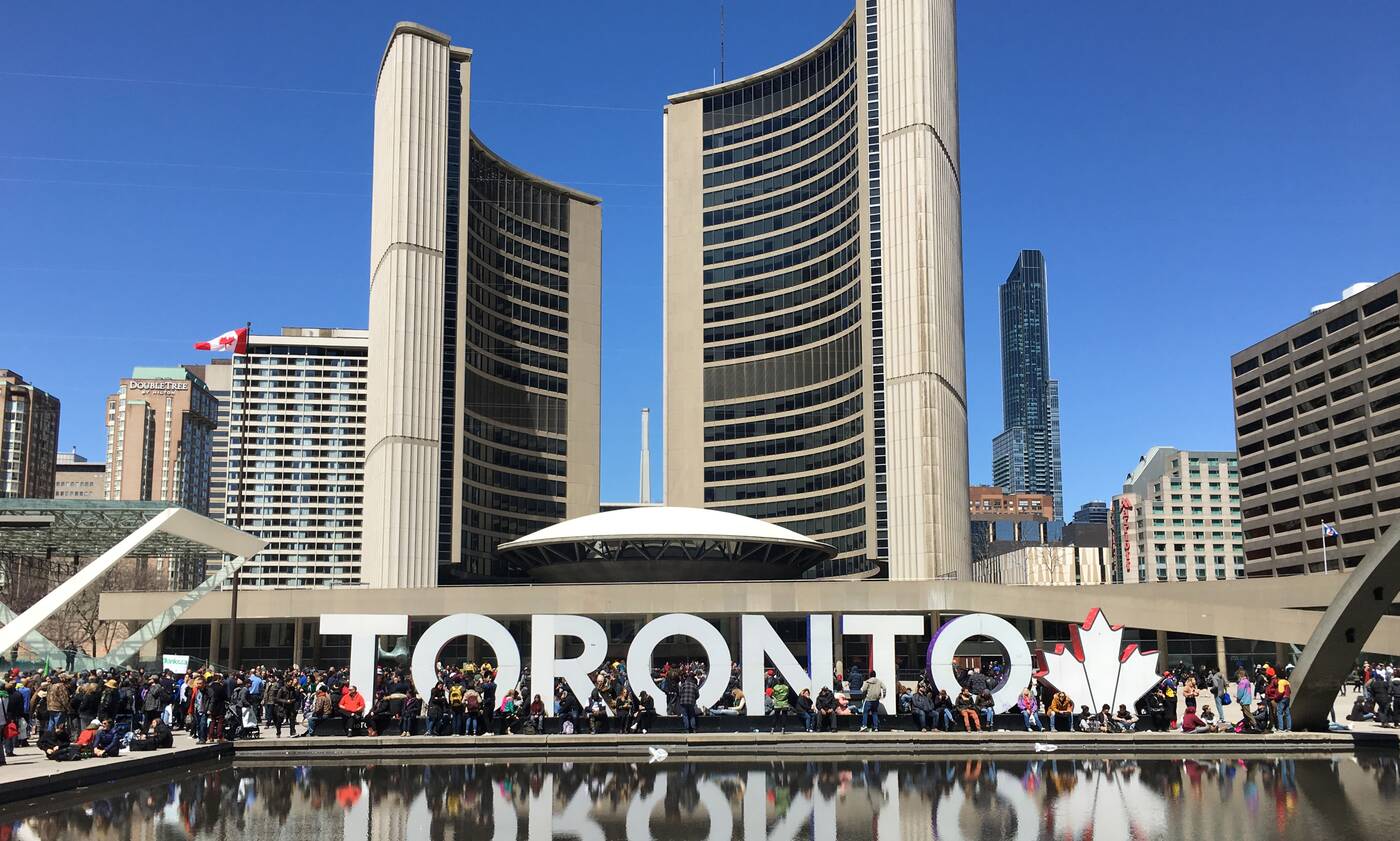 The famous Toronto sign was full of happy people on Friday afternoon as the sun shone down on weed fans. Photo by Lauren O'Neil.

This is Canada, after all.