These are the dirtiest spots on the TTC

A red rubber pole on the average Toronto subway train isn't too much dirtier than your smartphone, according to tests by sanitization professionals.

This doesn't mean those poles are "clean," though – or anything even close.

Because they hate me and all other germophobes, the company recently sent out a team of experts to swab "common rider 'grab' locations" in subway trains between St. George and Union Station.

What they found was disease-causing bacteria. Everywhere. 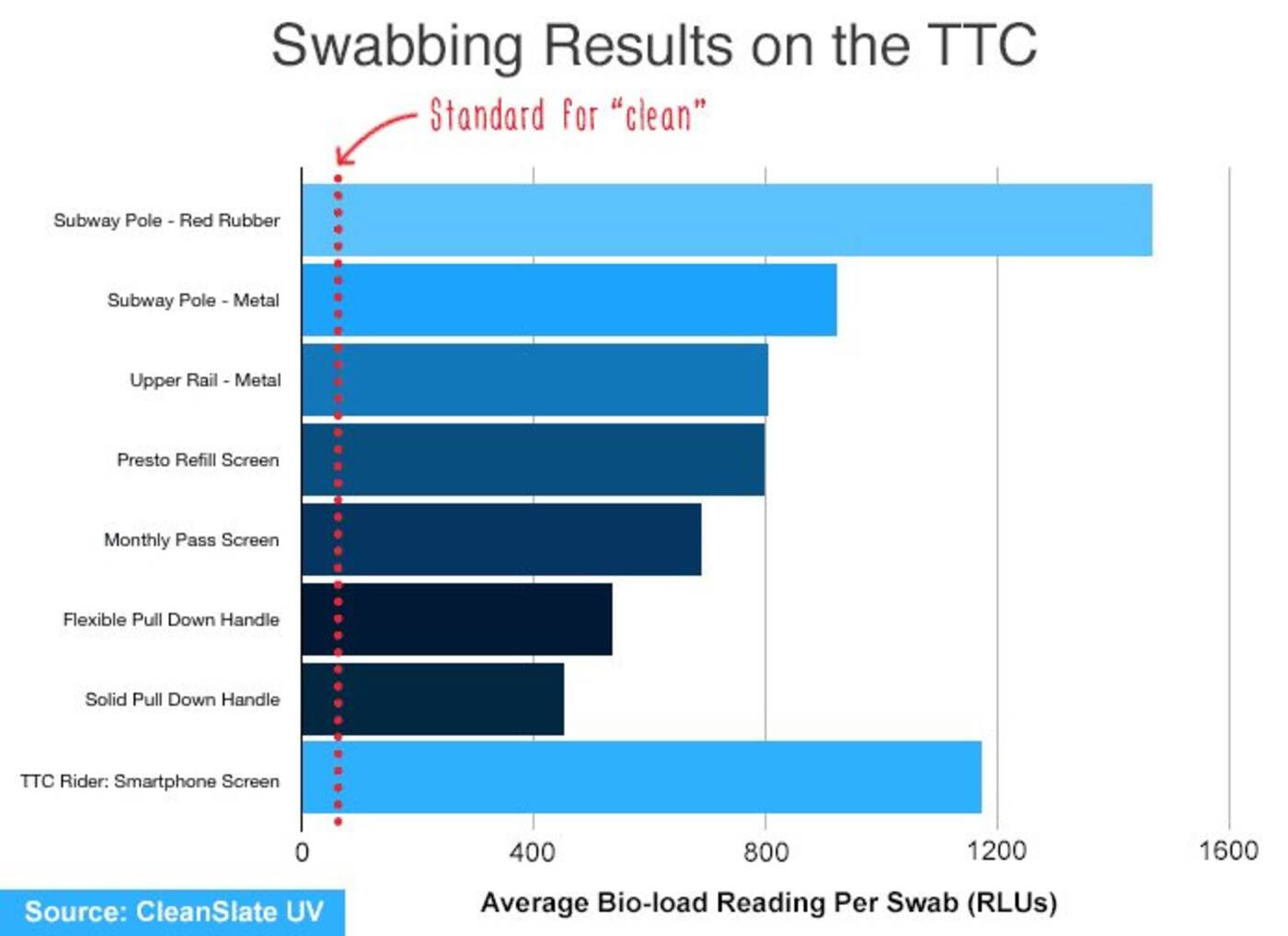 The average TTC rider's smartphone alone was found to have as many as 2300 relative light units (RLUs) on its surface, placing it clearly in the category of "filthy."

"Danger," reads the description for that category on CleanSlate's website. "Surface needs cleaning and has high risk of contamination from disease causing bacteria."

Only the aforementioned red rubber subway pole ranked higher in terms of "bio-load reading per swab." It joins smartphones and metal subway poles in the "filthy" category, while metal upper rails, presto refill screens, monthly pass screens and flexible pull down handles are ranked one category lower as "very dirty."

The subway's solid, round pull down handles were the most hygienic surface tested, with only about ⅓ of the bacteria of rubber poles. They would still be classified as "dirty," however, indicating a medium risk of contamination.

Want to know the dirtiest surfaces on your TTC commute? We swabbed subways cars to find out...#fluseason https://t.co/M5RMAnHiHW

It's important to note that, with only 56 swap samples, this wasn't a controlled or thoroughly scientific study. CleanSlate UV doesn't recommend avoiding public transit or risking a fall by not holding on to subway handles.

Instead, you should wash your hands after leaving the subway system (especially before touching your face or eating food) and consider wearing gloves (especially if you have a weakened immune system.)

"This bacteria is often harmless," wrote the company in its report, "but it can include bacteria like staphylococcus aureus,  E. Coli – which, yes, often comes from poop – and viruses like influenza."

So there you have it. Poop is everywhere. Sweet dreams and happy glove shopping, Toronto.

Ontario doctors say it's too early to end the lockdown