If you spent any quality time in the downtown core of Toronto in the 1980s, 90s or early 2000s, you surely remember the legend that is Ben Kerr.

A reedy elder sporting a ragged Blue Jays hat and weather-beaten guitar busking from his favoured spot outside the Bay at Yonge and Bloor, Ben’s blend of folksy American songbook and Eastern Canadiana could instantly brighten the darkest of days.

“Make a wish, it could be your lucky day” was his favourite refrain to those passing by.

The lore of Ben Kerr is stout: originally from Yarmouth, Nova Scotia, he moved west to Toronto and played guitar in Yorkville clubs alongside Gordon Lightfoot, Steppenwolf and Joni Mitchell, as well as penning songs for Neil Young and John Turner in the 1960s.

While working for the Toronto Harbour Commission in the 1970s, he grew irritated at cigarette smokers in the office and became a fierce advocate of banning it in the workplace, even recording and releasing a song entitled “Fire on one end, Fool on the other”:

It’s nigh impossible to imagine now, but during that era offices (and everywhere else, for that matter) were engulfed in plumes of blue cigarette smoke. People generally puffed away on cigarettes like chimneys, and it was socially accepted they could do it anywhere they pleased.

The fact Ben Kerr railed against it cast him as an outsider, a madman who wanted others to be free from second hand smoke.

In 1981, Ben walked from Toronto to Los Angeles, Forrest Gump style, to raise awareness of the dangers of smoking in the office, a journey that ended with appearances on Richard Simmons exercise series and The Tonight Show with Johnny Carson.

Along the way he was profiled by numerous local US television stations, and even appeared in a music video by criminally underrated New Wave band Trees - “Shock of the New” (that’s him at the beginning with his trademark gas mask)

After his epic anti-smoking trek, Ben returned to Toronto and took to busking and recording new material. In 1985 he ran for Mayor of Toronto, an exercise which he repeated every municipal election up until the early 2000s.

His platform was to be the first singing mayor and to “take Toronto to the world, in song”. He called himself “The Fringe Candidate” and unsurprisingly wrote a ditty about that too.

Perhaps most famously, Ben espoused a homespun Cayenne pepper cocktail which he claimed not only cured-all but also amplified sexual prowess (earning him the moniker of “King of Cayenne”).

Of his many twangy songs, “The Cayenne Pepper Song” remains a fan favourite. He even self-published a book – The Cayenne Pepper Does it All, and would sell it along with Cayenne recipes and best-of cassette tapes whenever he busked.

One of the stranger detours in a life full of strange detours was Ben’s appearance in the 1987 horror-film Beyond the Seventh Door.

Shot in Toronto on an apparent spaghetti string budget, the film featured chain-smoking cult actor Lazar Rockwood as an ex-con looking to rob his ex-girlfriend’s boss’s booby trapped castle (Casa Loma!), and featured Ben Kerr in a cameo appearance as a corpse central to the plot and commanding a tonne of creepy screen time.

This infamous “bottom-shelf VHS classic” was also a sleazy staple of Citytv’s Late Great Movies in the early 90s, and has finally been released on DVD by the splendid boffins at Intervision, with bonus features including a short appreciation of Ben Kerr by his good friend/campaign manager Jaymz Bee, and yours truly.

The following year Ben appeared in director B.D. Benedikt’s follow up Brooklyn Nights also starring Lazar Rockwood and again shot in Toronto. This time thankfully Ben’s character was alive and well and belting out in the opening scene.

Ben Kerr passed away in 2005 at the age of 75. In 2007, Toronto City Council approved a motion to name a laneway near his house at Jones Avenue and Danforth in his honour and in 2008, Ben Kerr Lane was officially unveiled. 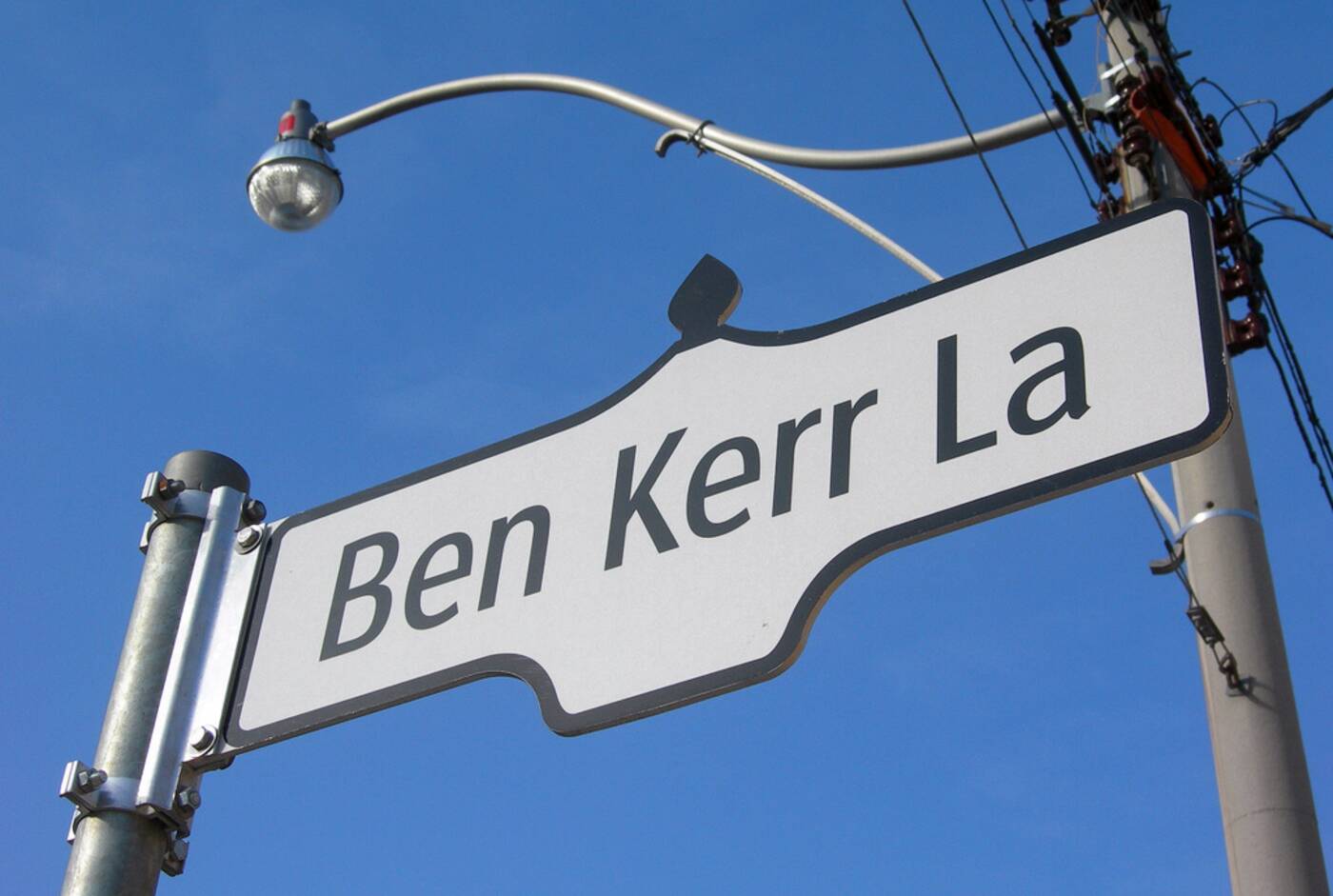 Not only was Ben ahead of the curve on the issue of non-smokers rights, his insights into politics were quite prophetic as well.

Upon being termed a “joke” candidate because he had no political experience, Ben would often point to Ronald Reagan, or Jesse Ventura, as examples of entertainers who transitioned onto the political stage, suggesting they understood how to play the media better than stuffy bureaucrats.

Little did we realize at the time, it was truly a golden age of eccentric Toronto street characters. From Crad Kilodney to Sarko “BELIEVE in the Lord!” to Rockin’ Rick Donaldson and the late great Ben Kerr.

Ben’s positive vibes were contagious. Crowds could always be found gathered around his spot at Yonge and Bloor come rain, snow or shine.

He was a proper old-school busker, rarely absent from the streets, a towering inspiration to younger street performers, and revered by the chalkers who would mark his territory.

That spot outside the Bay at Yonge and Bloor has never been the same since “The King of Cayenne” strummed his final song.