Someone in Toronto is trying to make marijuana delivery happen, but it's not going to happen (if angry local parents have anything to do with it.)

Weedora is a new service that purports to allow adults in the GTA to order cannabis products right to their door. You may have seen hot pink flyers advertising it in your neighbourhood, in your mailbox or on the internet.

The company has been on a marketing tear lately, distributing door hangers all over town that promise "7 free grams when you order your first ounce." 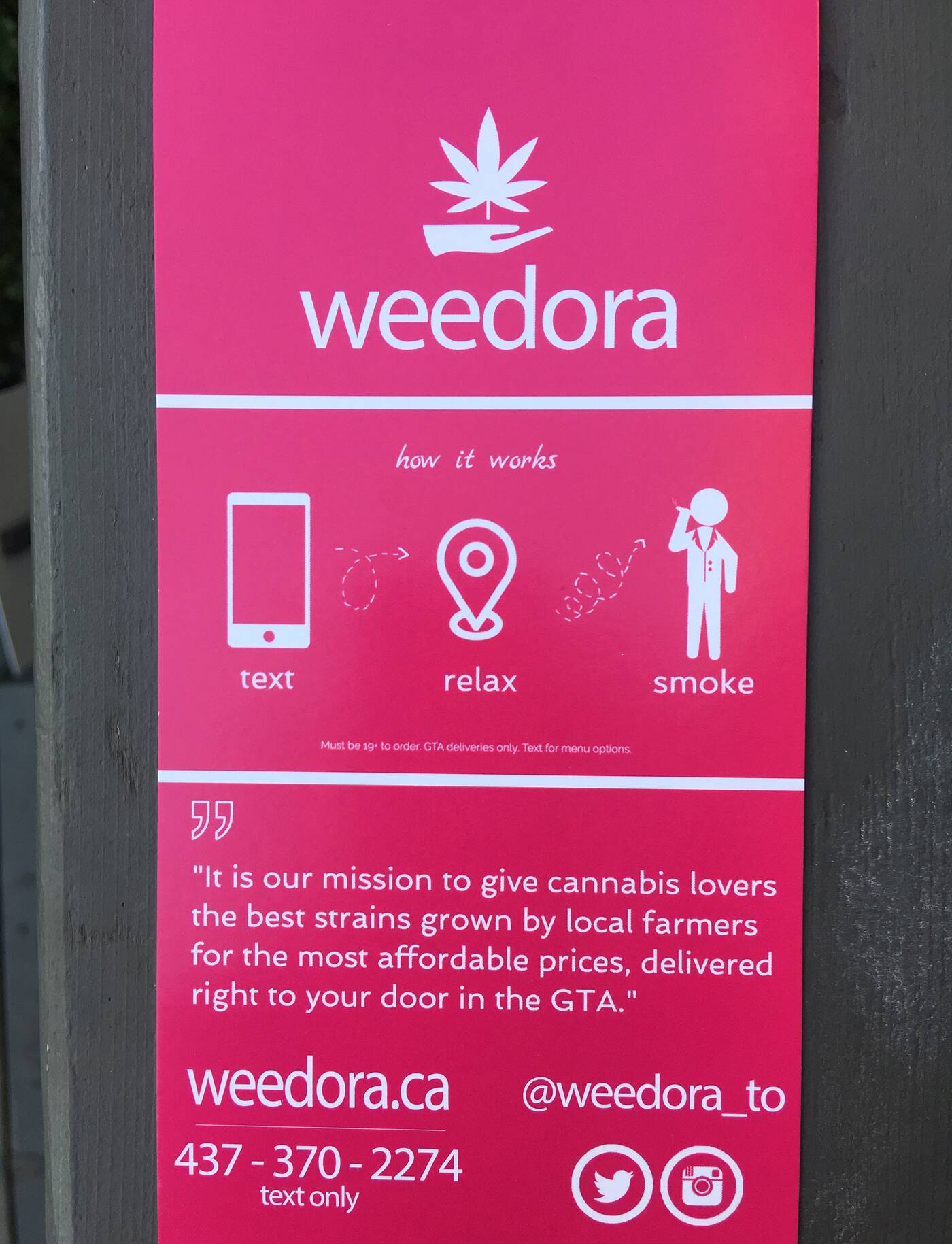 The back of a Weedora flyer shows how the service is supposed to work. Photo by blogTO.

A simple graphic on the backs of these flyers shows how the service apparently works – "text, relax, smoke" – but many people are still confused about how this is even a thing. And with good reason.

Marijuana isn't set to be legalized in Canada until next July, which technically makes Weedora an illegal recreational drug operation.

If dial-a-bottle services can't legally deliver alcohol past a certain time, how are Torontonians able to order an illegal substance to their homes, at any time, with no penalty?

@TheCurrentCBC @Weedora_TO My 11-year old boy found this hanging out front door last week andtold me is the the advertisement for Marijuana! pic.twitter.com/ng2Tq0zEM3

"These criminal drug dealers need to put in jail and assets seized," wrote someone on Twitter today after learning of the flyers. "They put vulnerable individuals and neighbourhoods at risk."

Some people in the city – particularly parents of young children – are more angry about the door hangers themselves than the threat of getting dinged by the cops for having weed.

Talk about overreaction, get a grip. Ads for beer send her into meltdown as well? https://t.co/Zy6wpr8SZs

Others in Toronto seem delighted, or at the very least amused by the idea.

Between this and McDonald's delivering now, I never have to leave my house on the weekends

Unfortunately for them, business is off to shaky start.

Oh, and on Friday, we learned that Foodora (the very much legal food delivery brand) had served Weedora with a cease and desist notice for copyright infringement.

So parents might not have much to worry about, after all. The weed delivery firm is already experiencing legal troubles – just not the type you'd normally expect.