Once upon a time, Toronto offered up a unique life experience for young people called Adventure Playground, the likes of which could never happen again. Perhaps you're old enough to remember it or know someone who told tales about how amazing it was?

From 1974 until the mid-1980s, Adventure Playground (located at the foot of Bathurst Street on the grounds of Harbourfront) allowed children to build amazing structures restricted only by their own imagination. 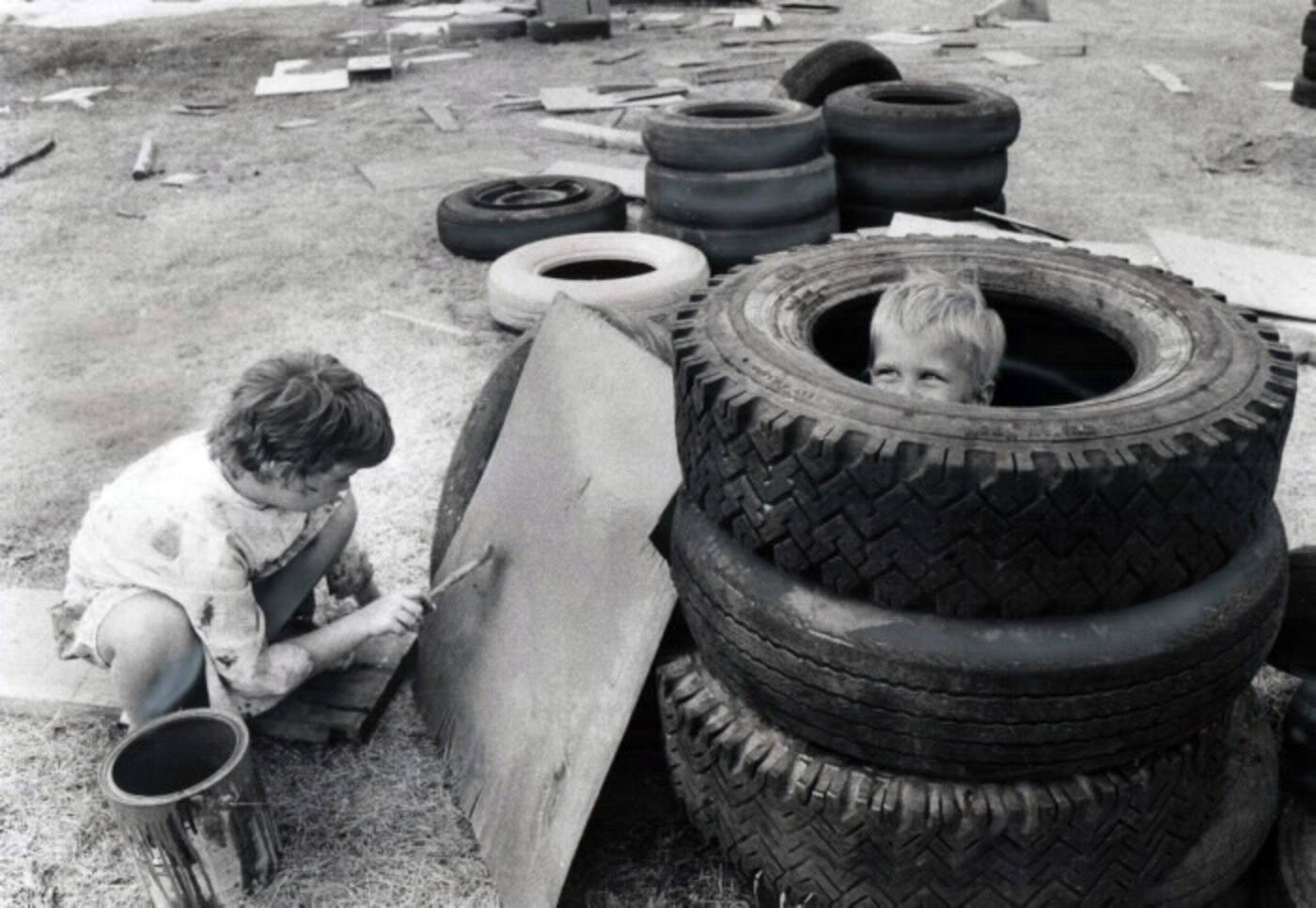 Used tires, plywood, cans of paint — just some of the things on offer on at Adventure Playground.

They were given hammers, nails, saws, assorted tools, metal shovels, and unlimited amounts of lumber to go hog-wild constructing buildings, bridges, forts, houses, dog houses, and whatever else they desired.

There was a garden, a fire-pit, and a water supply. It was a mini-civilization, a shanty town on Bathurst — devised, designed, constructed and lorded over by kids.

For children under six, there was a sister site called the Creative Playground which featured large building blocks, painting stations, costumes and crafts. 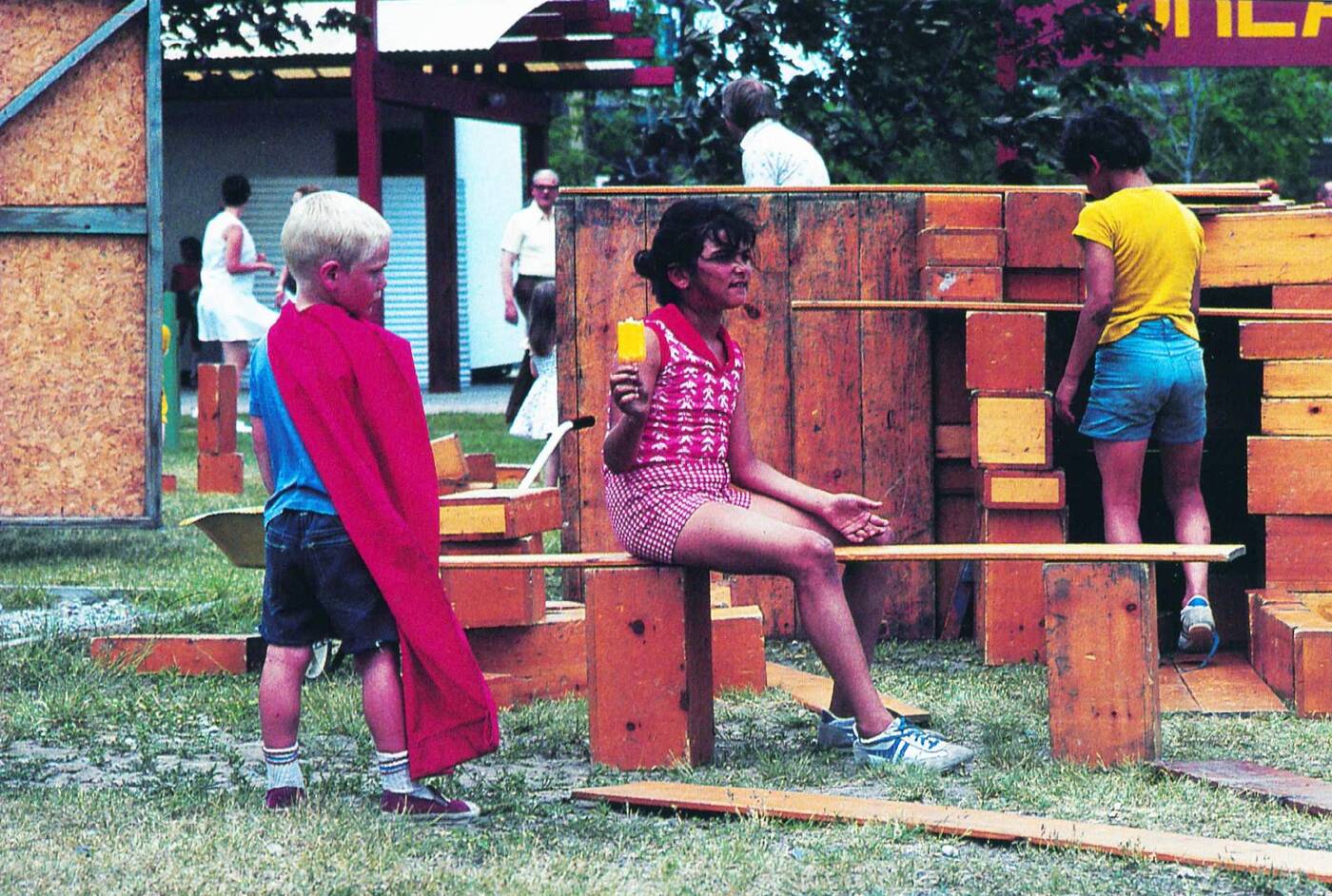 The Creative Playground wasn't quite as wild as its sibling, but it still offered a unique experience for kids under six.

So-called “Adventure Playgrounds” had been all the rage in Europe, dating back to the 1940s when Danish landscape designer C. Th. Sorensen envisioned and popularized a “junk playground in which children could create, shape, and dream and imagine a reality.”

In 1974 upon the opening of Harbourfront, a professor of landscape design from the University of Toronto named Bill Rock had pitched the concept of a “Junk Playground” to be created at the bottom of Bathurst Street.

Michael Moffat, one of Rock’s students, took on the project and navigated it through completion, even starting a non-profit organization (“Adventure Education Concept”) to keep it properly staffed and funded.

Although the project was guided by a healthy dose of 1960s idealism, there was the very real challenge of maintaining law and order in a situation that might quickly dissolve into Lord of the Flies with shovels and hammers.

Children were supervised, and their buildings were inspected regularly for safety codes (no doubt liberally applied). 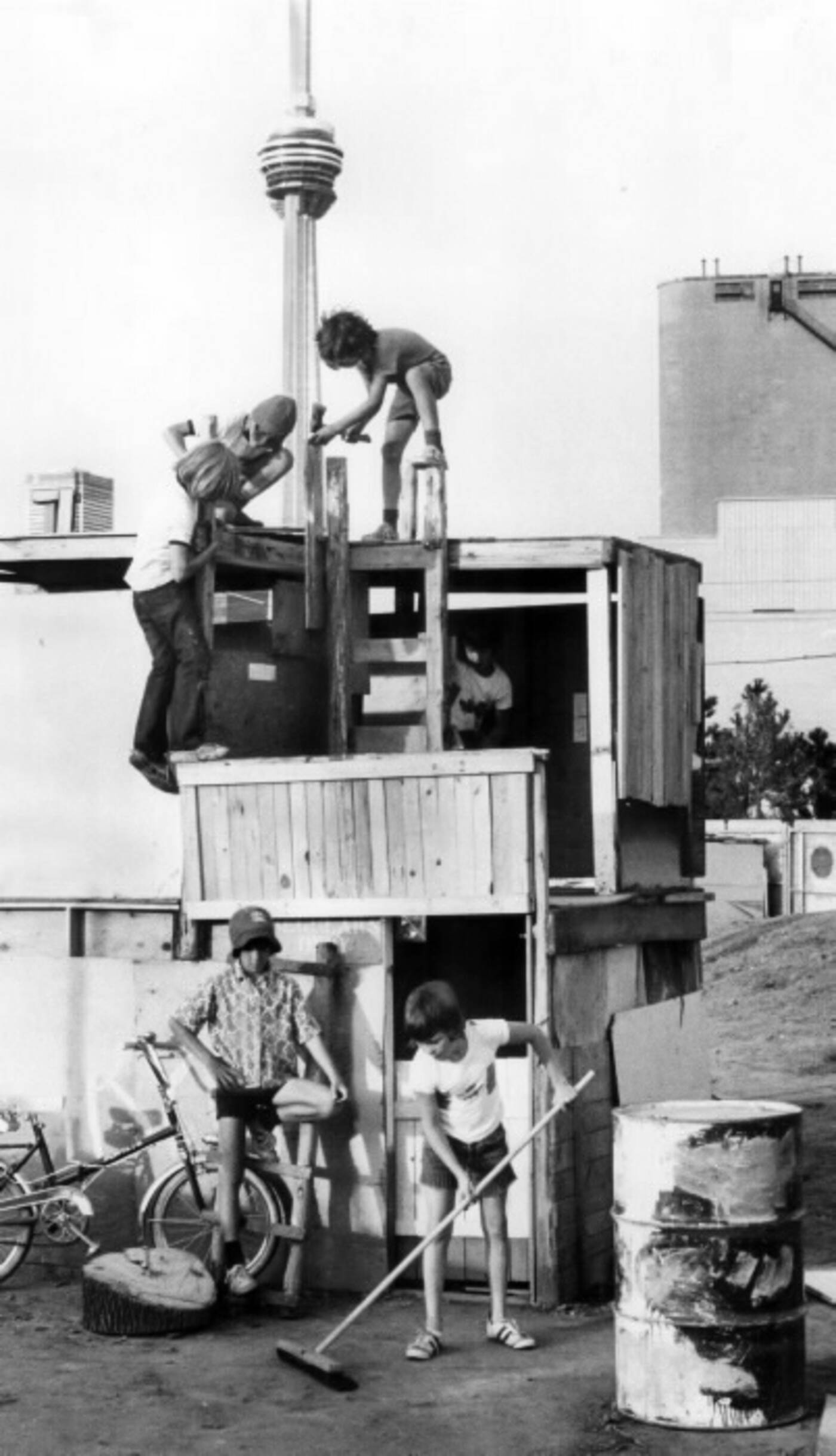 Those who visited Adventure Playground will remember how amazing some of the self-built structures were.

Guests of Adventure Playground were easily split into two tribes – the regulars, kids who lived nearby and attended the playground daily, and the visitors, usually school groups, Harbourfront day campers or daycare wards.

As you might imagine, tension often arose when the visitors interfered with anything created by the regulars (whose work usually included “KEEP OUT - REGULARS ONLY!” signage).

Most children who spent time at the Park recall the basic survival skills they learned, all the more amazing in an urban setting. Sure, there were fights, hurt feelings, cuts, and bruises but these were off-set by a strong feeling of independence and accomplishment. At the end of each summer, structures were judged and awards were doled out.

Imagining such a place in today’s litigious and overprotective climate is simply beyond belief. While injuries were no doubt commonplace, they were accepted as part of the experience, just like rope burns or skinned knees at Ontario Place’s Children’s Village.

In the early 1980s, the Playground was forced to move from Bathurst to a space next to the Fort York Armory due to the construction of Little Norway Park. The new space was a paved parking lot, so many of Adventure Park’s lusher offerings were scrapped. 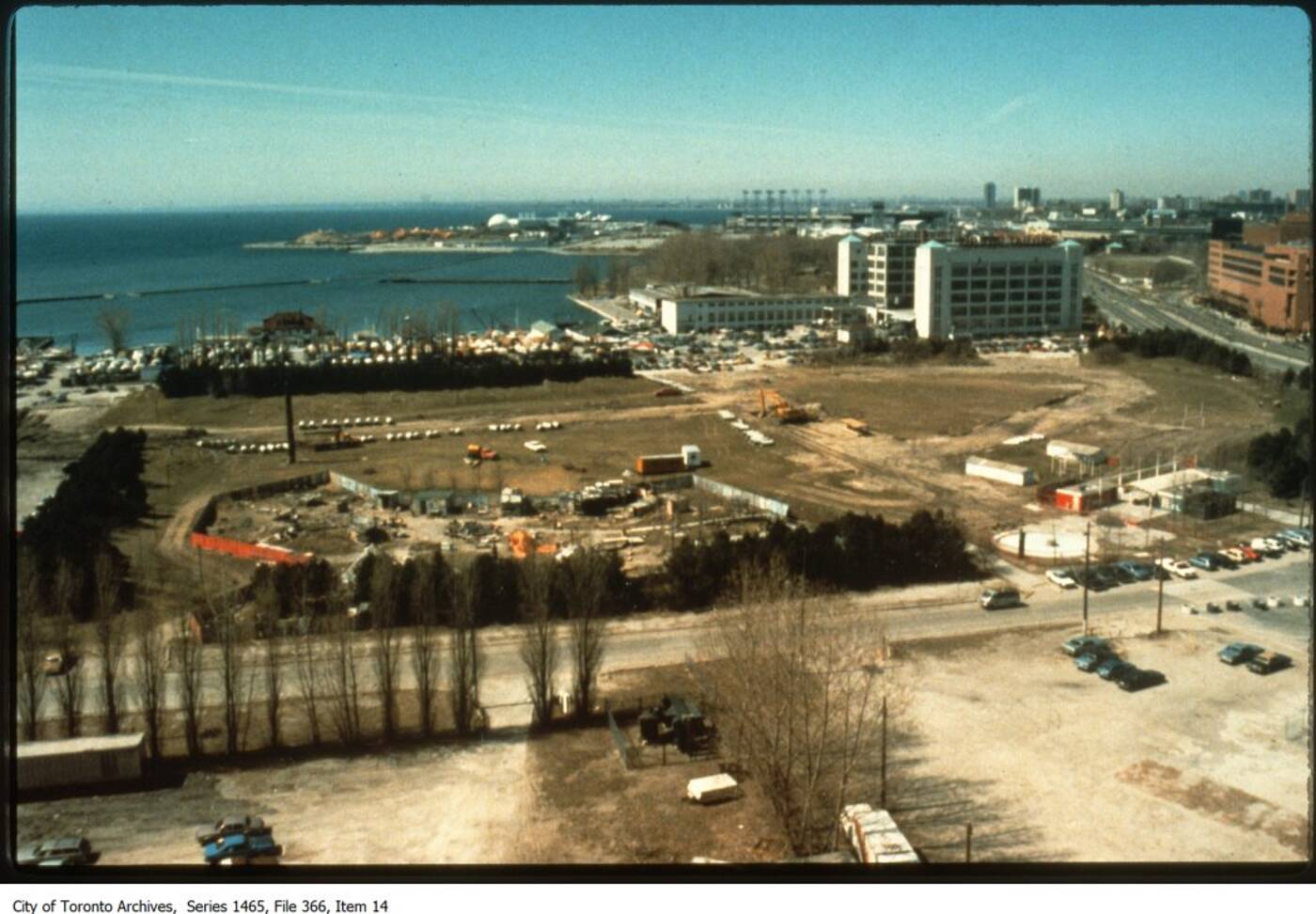 Gone were the gardens, the water, and the fire-pit. While both Adventure Playground and Creative Playground were featured more prominently in Harbourfront’s marketing, truth be told it was never really the same.

Attitudes about safety and accountability were changing too, and as you might imagine there were a legion of legal entities salivating at the prospect of taking on this dangerous playground.

An unfortunate incident occurred in the 1980s when a child broke into the grounds late at night and injured himself.

His parents retained counsel, and the legal eagles descended like locusts. Not surprisingly, Adventure Playground was soon closed for good. 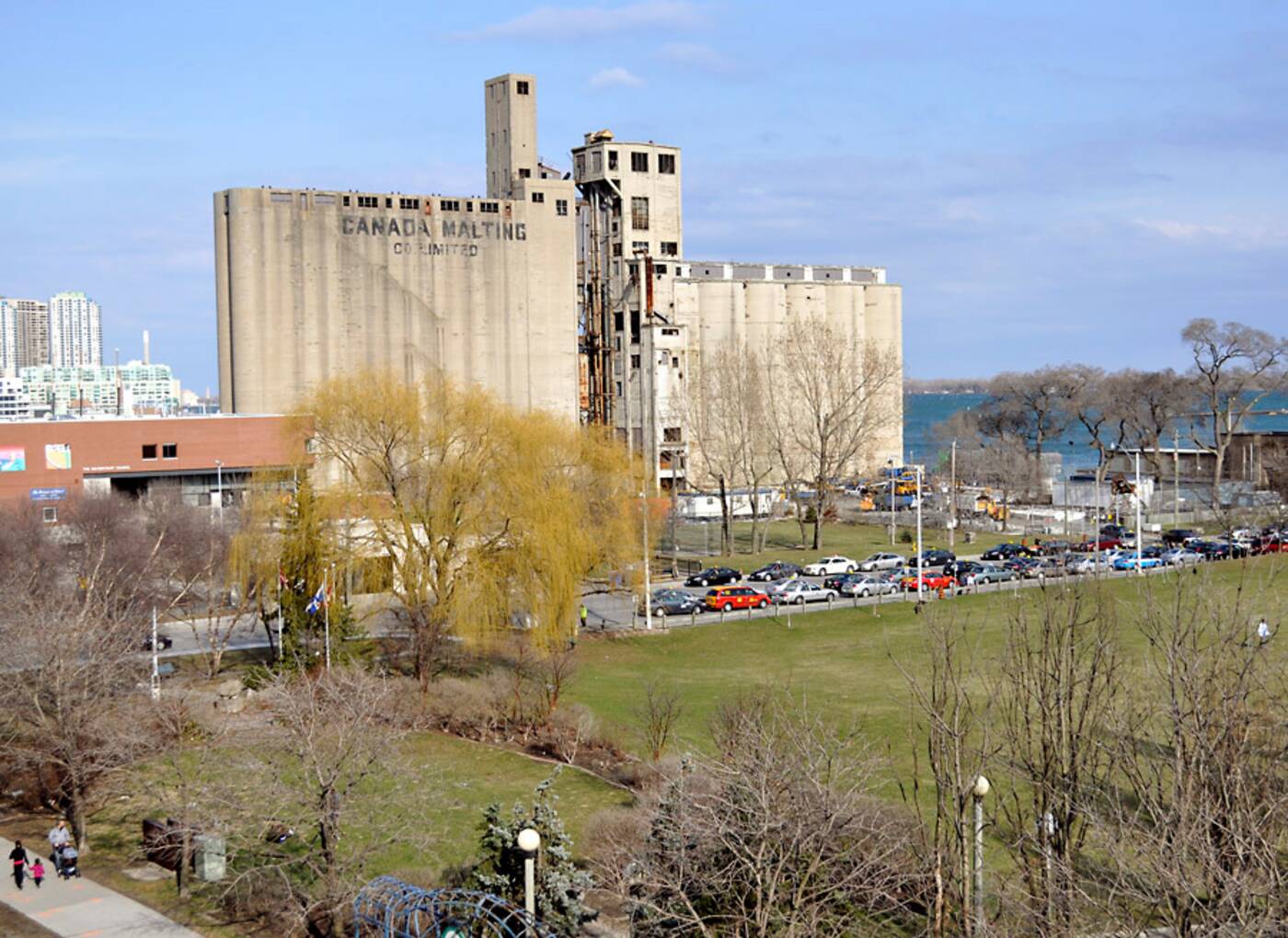 The site of the original Adventure Playground. Photo by William Kimber.

Anyone who ever attended Adventure Playground, albeit on a short or long visit, no doubt carries vivid memories of it through life. It was a fleeting moment of absolute freedom; to not only imagine and create physical structures, but to govern them as well.

Being handed a saw and a 2x4 was empowering, and while technology now allows young people to create and dominate virtual worlds, it’s not quite the same thrill.