Toronto is poised to make a major breakthrough to expand laneway housing. Yesterday, community council passed a motion requesting that city staff report on a laneway suite initiative that would dramatically cut the red tape surrounding the creation of these residential spaces.

The directive awaits city council approval in early July, which would put a staff report on the table in early 2018, but this is as close as Toronto has ever been to taking advantage of its roughly 250 kilometres of laneways as a viable housing alternative. 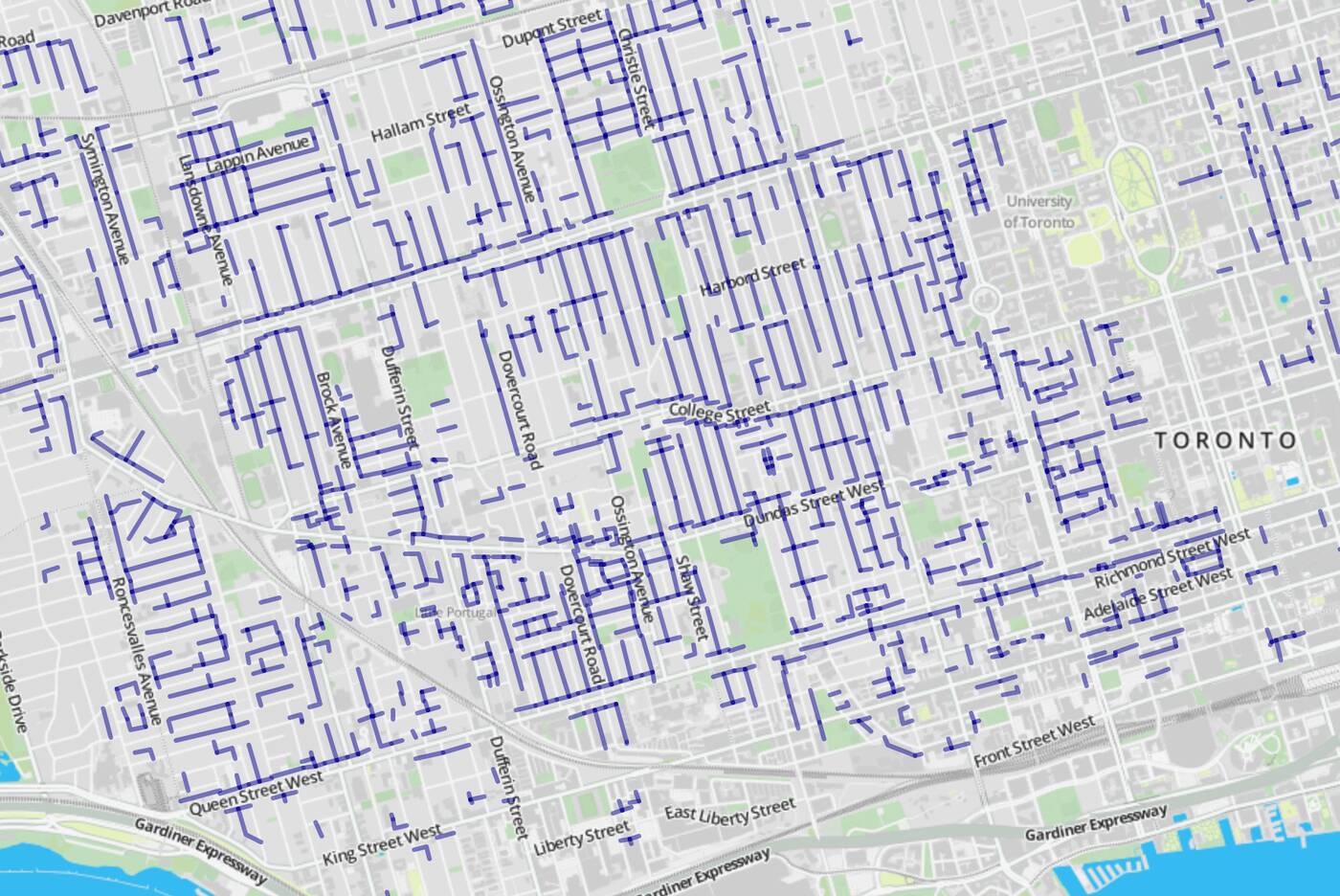 It's been a long time coming. Back in 2006, the city basically quashed the idea of widespread laneway housing by subjecting building permits to a series of strict conditions that disqualified all but a few properties. The examples that do exist have been the result of hard won battles.

Now, over a decade later, the climate has changed even as most of our laneways have stayed the same. Toronto's in the midst of a housing crunch with near terrifying rental vacancy rates and there's greater openness to welcoming creative solutions to what's been described as a crisis. 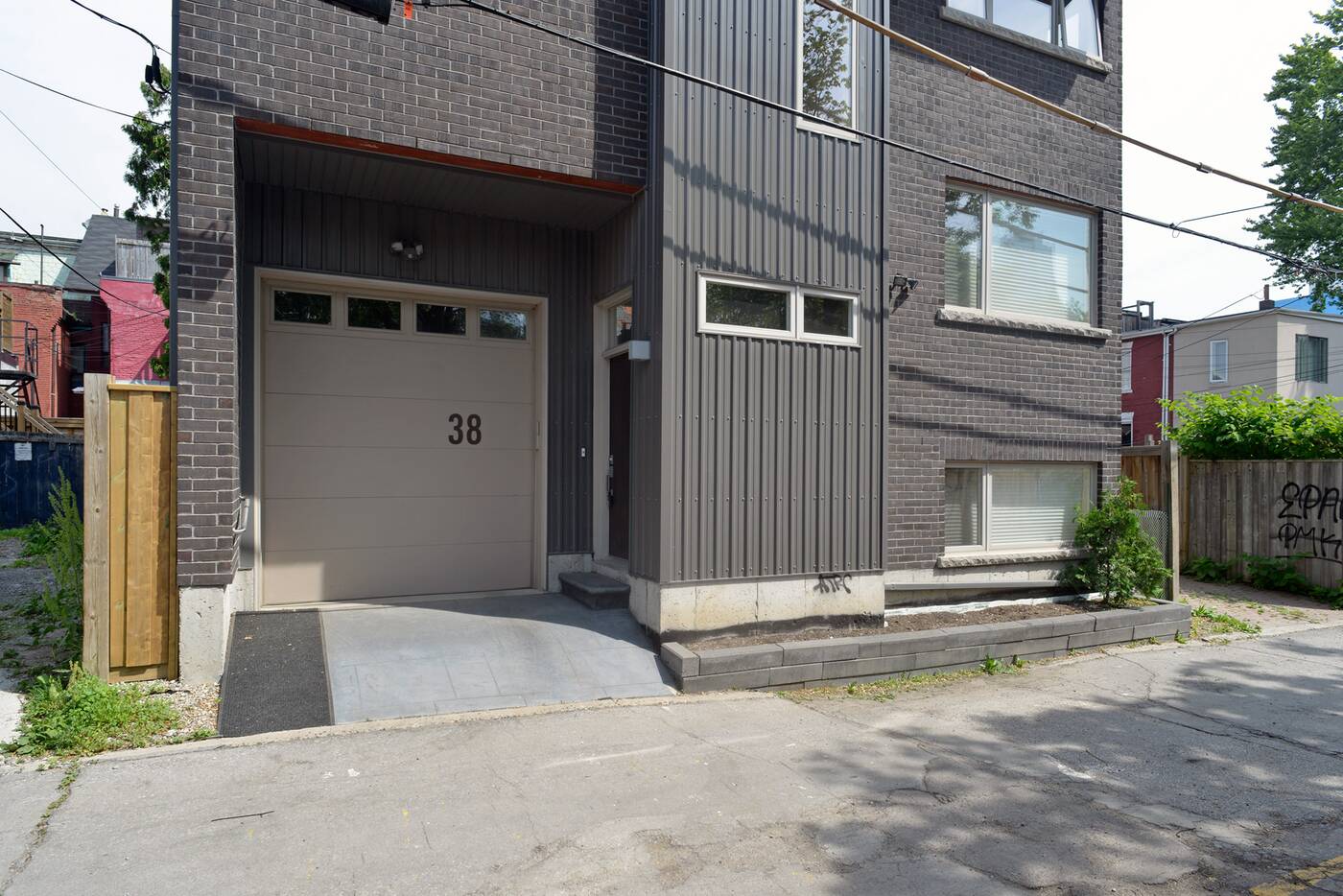 Most of Toronto's existing laneway houses are larger than the secondary suites proposed by Lansecape. Photo by Derek Flack.

Enter Lanescape, a community organization co-founded by Alex Sharpe, Craig Race and Andrew Sorbara. The idea for the group was born over conversations between its three founders during Sharpe's own efforts to build a laneway suite in 2012 and was eventually formalized two years later.

"Why does the city make it so hard to create laneway housing was our founding question," recalls Sharpe, who's also a co-founder of IQ Office Suites, a shared work site that addresses another supply crunch the city is facing in terms of first-class downtown office space. 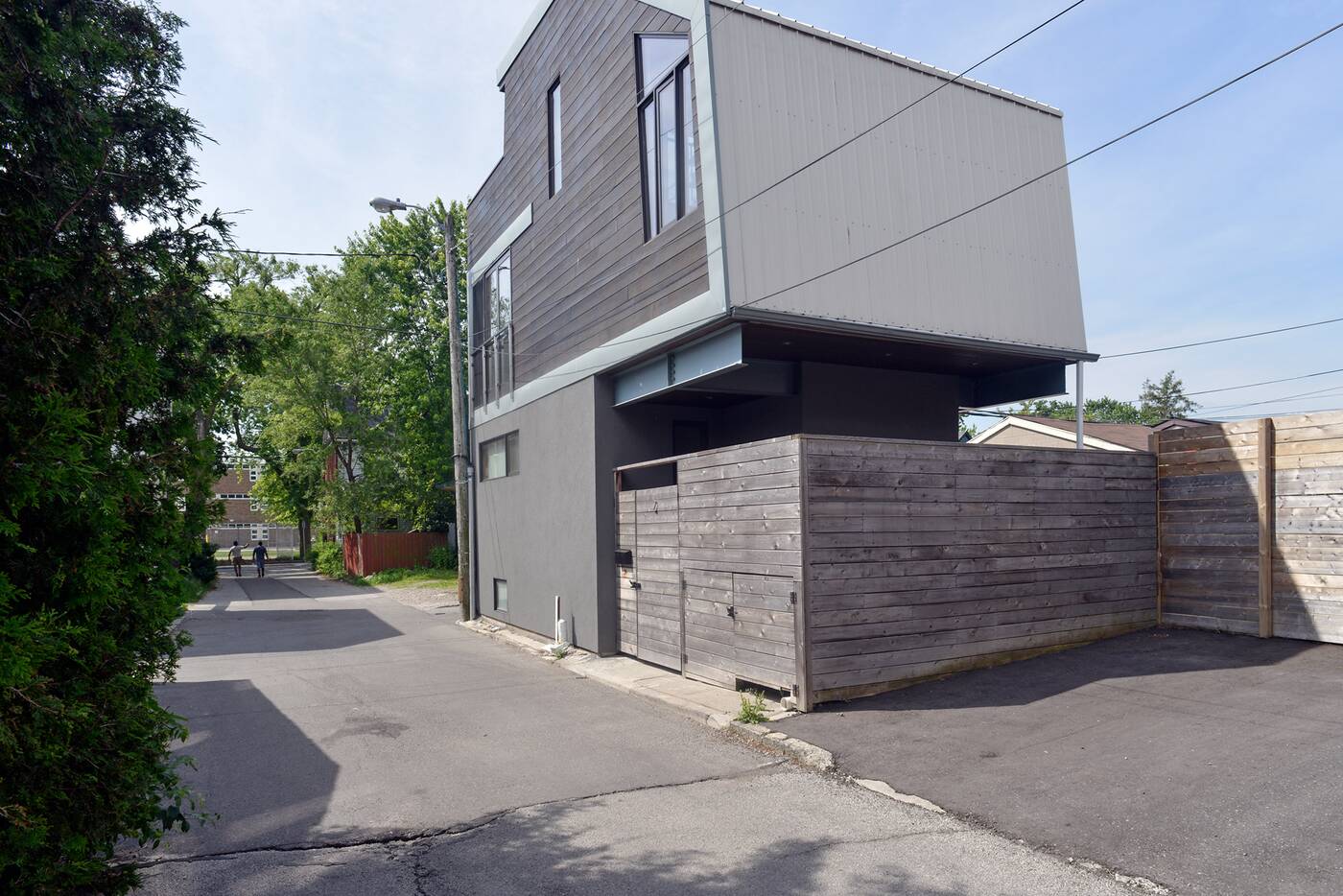 An existing laneway house near Dupont and Chirstie. Photo by Derek Flack.

"In 2011, the province mandated that secondary suites be part of the Planning Act for municipalities, which ultimately gave momentum to the idea for an as-of-right framework for laneway suites," Sharpe explains.

After partnering with Evergreen and securing the support of councillors Ana Bailão and Mary-Margaret McMahon, a number of community consultation efforts were coordinated to help develop this working framework, which is now on the cusp of consideration by the city. 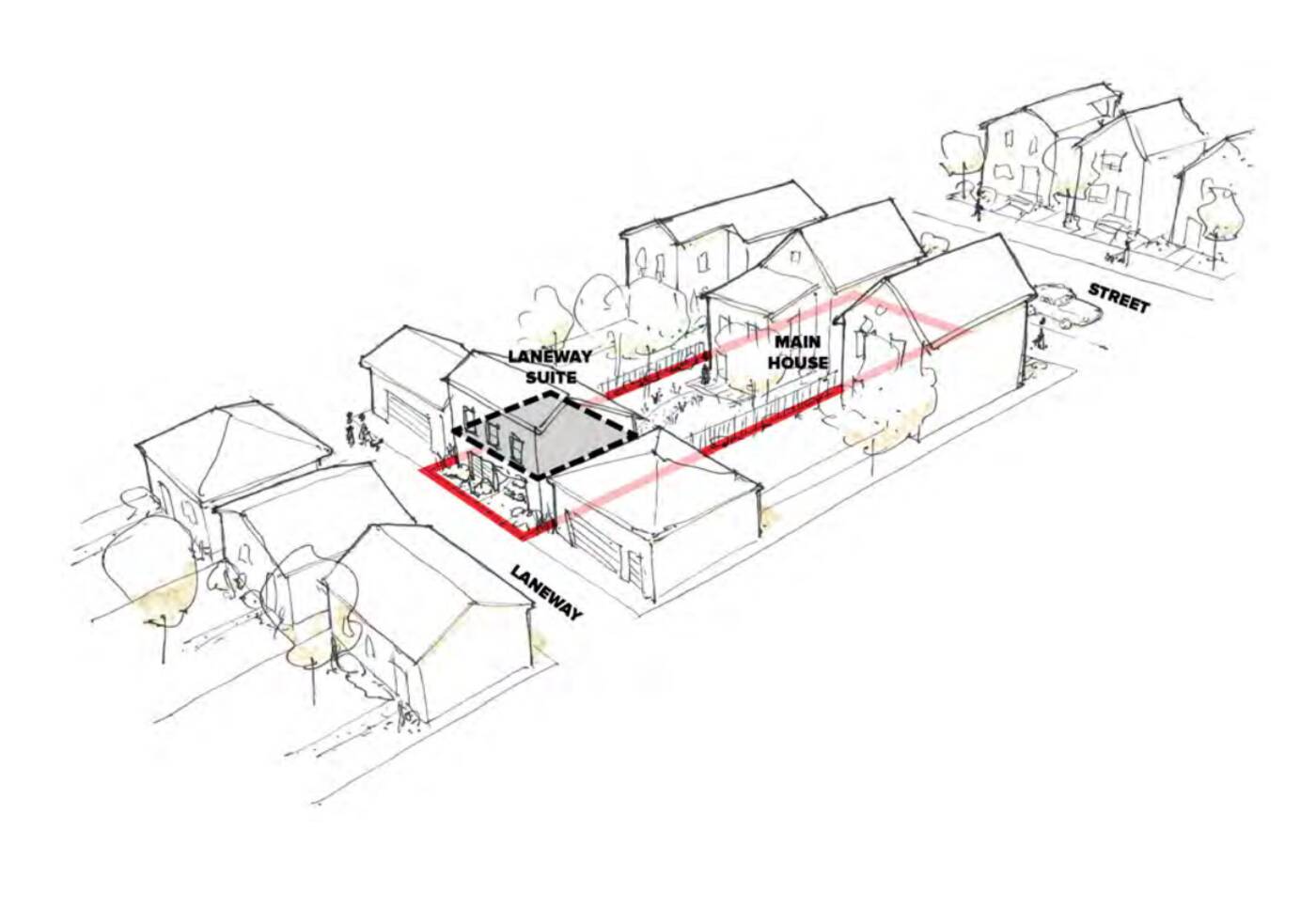 A typical laneway suite arrangement sees the secondary suite tied to the main residences for all services. Image via Lanescape.

What makes the laneway suites plan more likely to succeed than previous efforts is that it's firmly directed at secondary units rather than standalone residences. The guidelines stipulate all services must run from the main home and suites can't be severed from the primary property.

"It's like putting a basement apartment on top of your garage," Sharpe offers by way of analogy. "Where would you rather live as a renter? Laneway suites can help foster gentle density in Toronto."

The ability to increase rental stock is something that Councillor Bailão thinks is a crucial element of the initiative. "We need to start being creative about our housing challenges," she says. "The status quo isn't working." 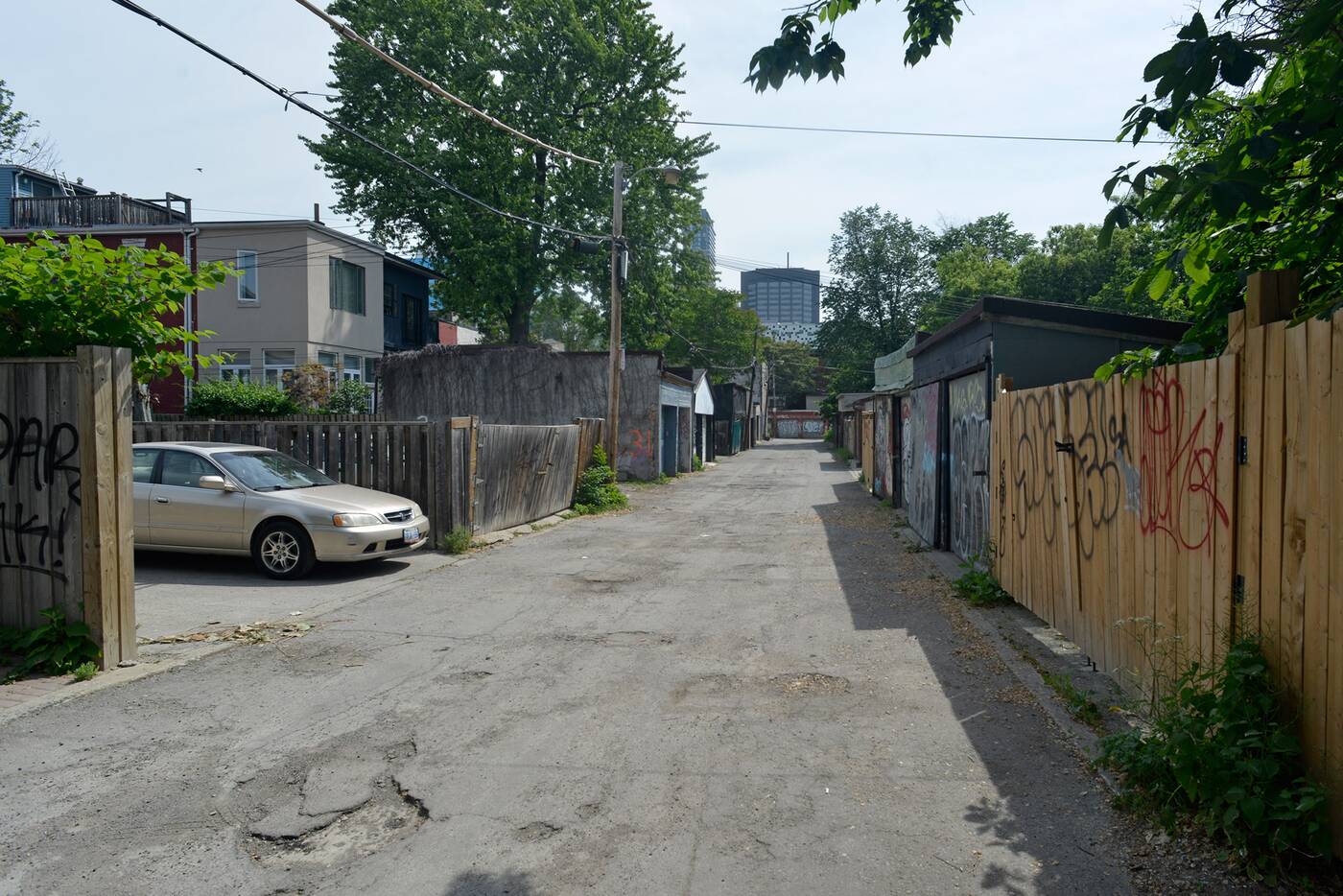 A typical Toronto laneway near Dundas and Beverley streets. Photo by Derek Flack.

"These suites aren't the silver bullet, but it's one more tool," she continues. "It could have a significant impact. We have hundreds of kilometres of laneways and a city like Vancouver has already built 2,500 units like this."

Investigating what other cities were doing with laneway spaces was a major part of creating a framework, but so too was local outreach. "The idea was to study other municipalities but also to focus on the specific issues that had proven challenging here in the past," Sharpe says of the process. 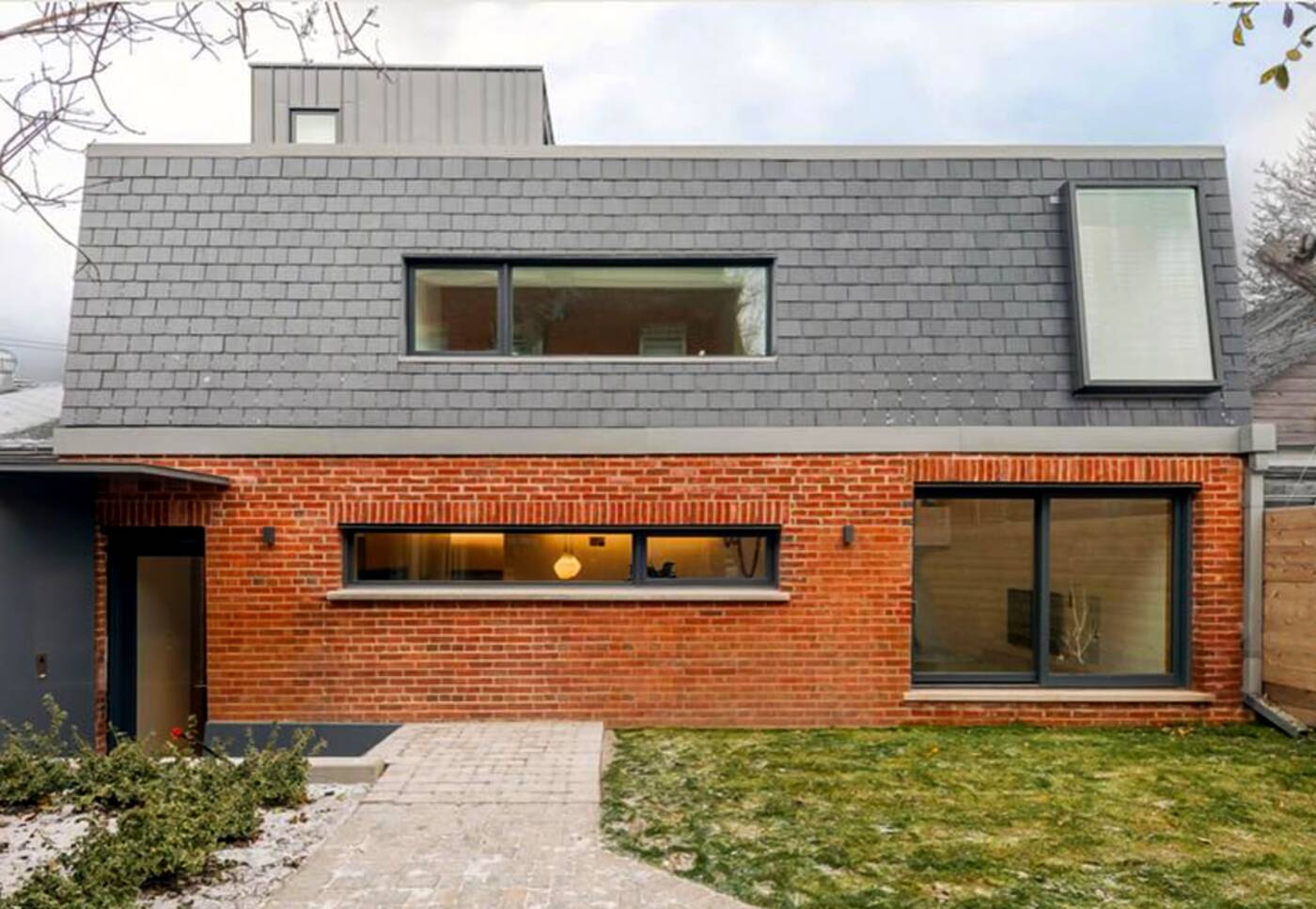 Lanescape received over 2,300 responses to a survey it conducted leading up to its report to Toronto and East York Community Council and nearly 200 letters of support accompanied yesterday's successful motion. The ultimate test will be city council, but there's plenty of momentum right now.

"The need for housing like this hasn't been as severe in the past," Bailão says. "When you don't see or feel the need for the change, it tends not to happen. Now that the need is greater, people are willing to look into it."

It's not quite here yet, but it seems as though we can finally talk in terms of when rather than if Toronto will reimagine its laneway spaces as residential-friendly corridors with unique small scale housing options.