The Toronto of the 1990s doesn't seem like such a distant place at first thought, but the more you consider the sweeping changes the city has undergone over the last three decades, the more it seems bizarre that there were so few condos and so many undeveloped industrial sites.

There was an unfinished feel to this Toronto. You could ride a bike around places like Liberty Village, the Eastern Waterfront, and the Junction and feel like time moved very slowly.

Here's a look back at Toronto intersections before the ubiquity of condo podiums, big box retail, and the near-total elimination of our inner city industry. 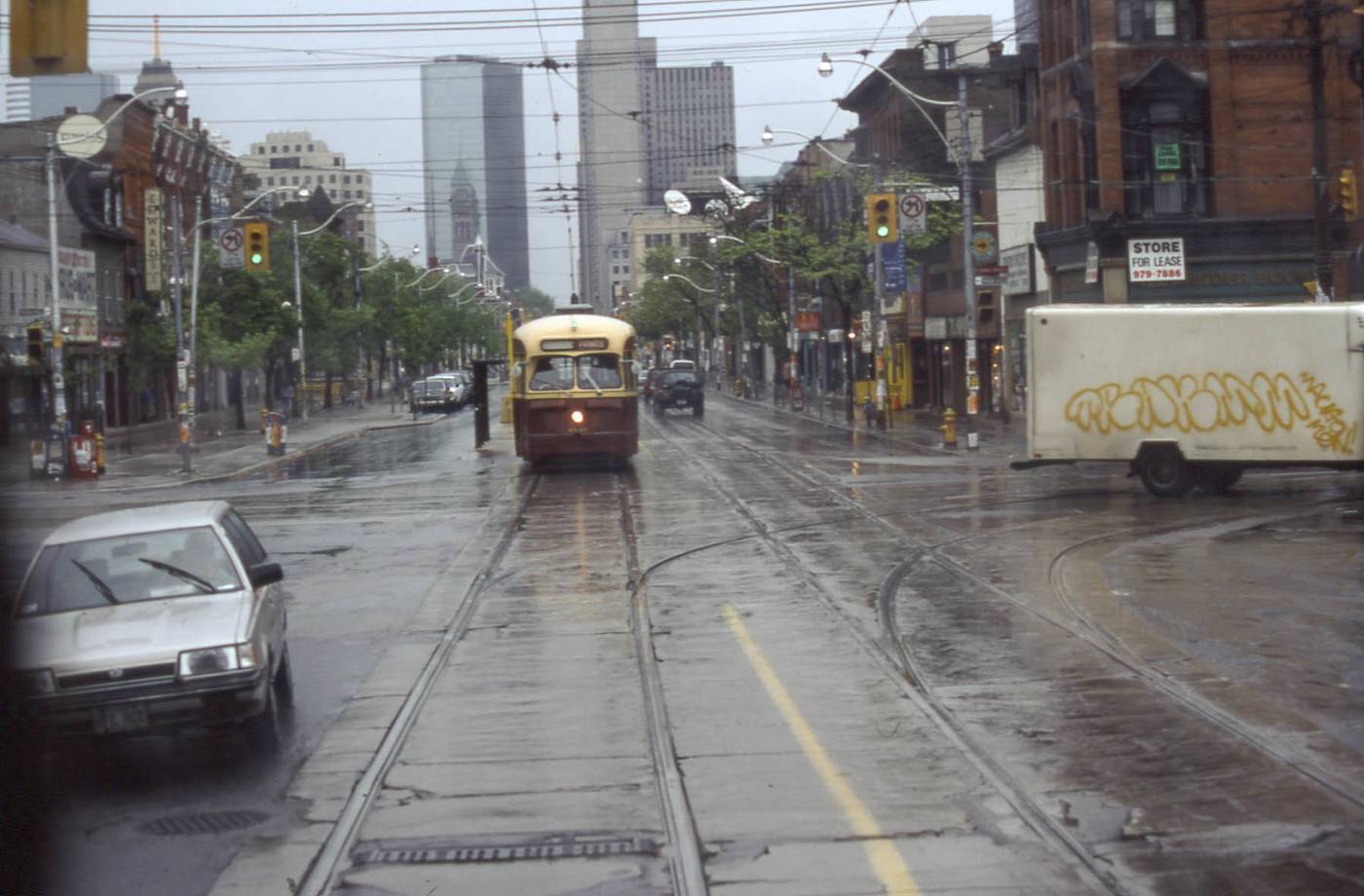 Yes, there were still PCC streetcars in service on Toronto streets in the 1990s. Here we're looking east along a much quieter Queen Street at Spadina Avenue. 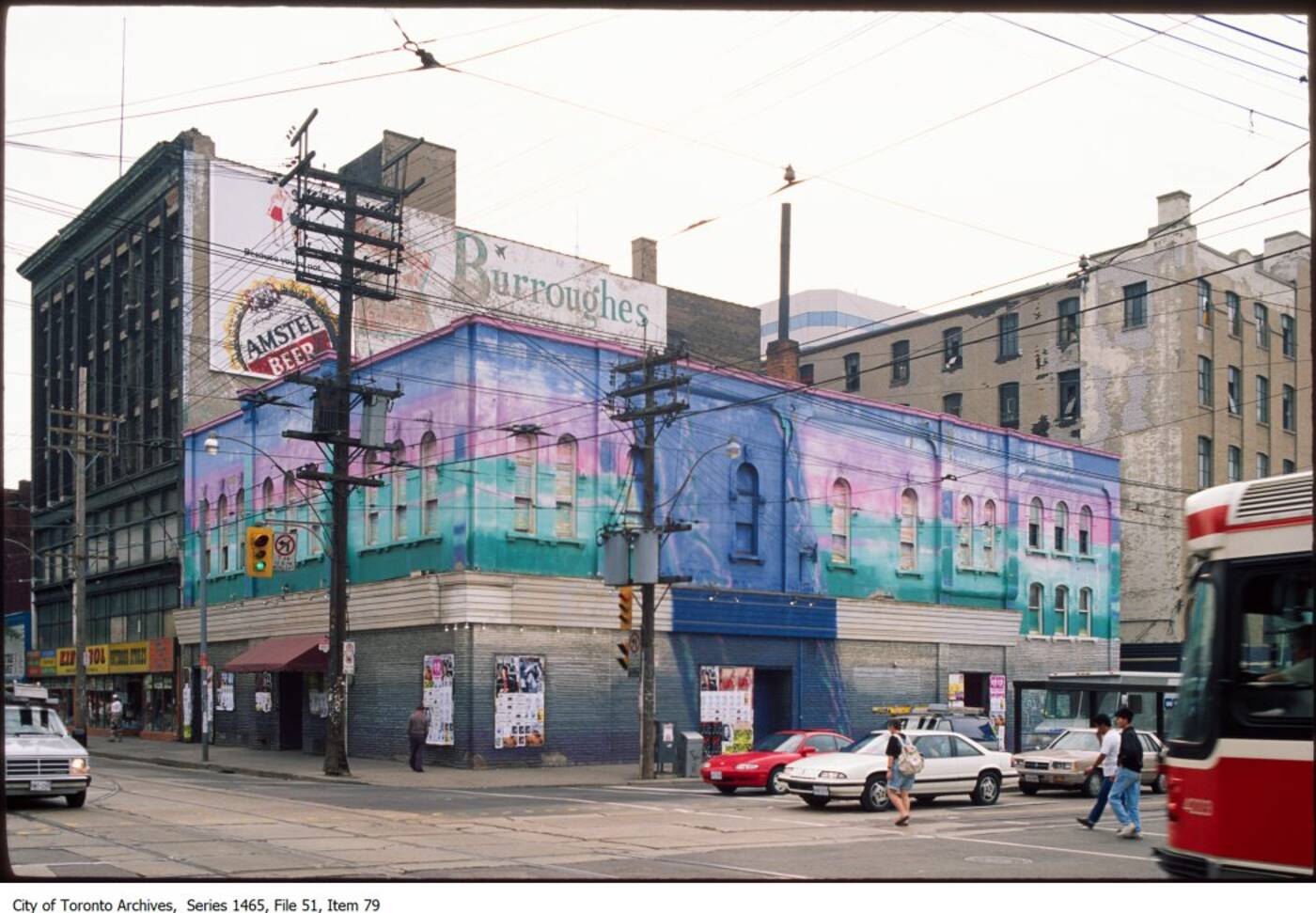 Queen and Bathurst, looking southeast. Photo by the Toronto Archives.

Oh, the Big Bop. Before it was a furniture store targeted toward condo owners, this building at the southeast corner of Queen and Bathurst was a raucous live music venue. 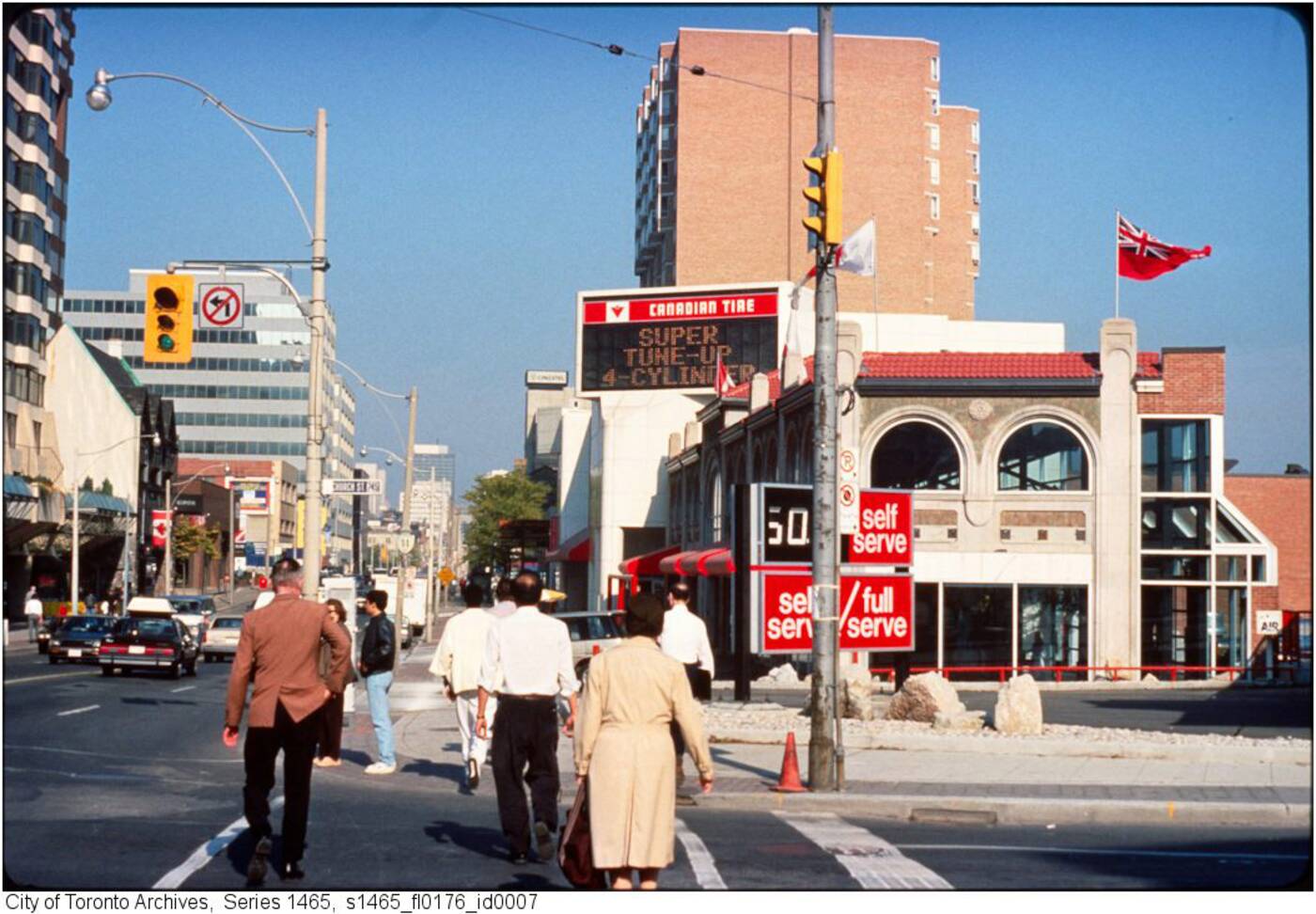 The view up Yonge Street at Church/Davenport hasn't changed that much—yet. But, it's right on the cusp of the trendy and bustling Yorkville neighbourhood. 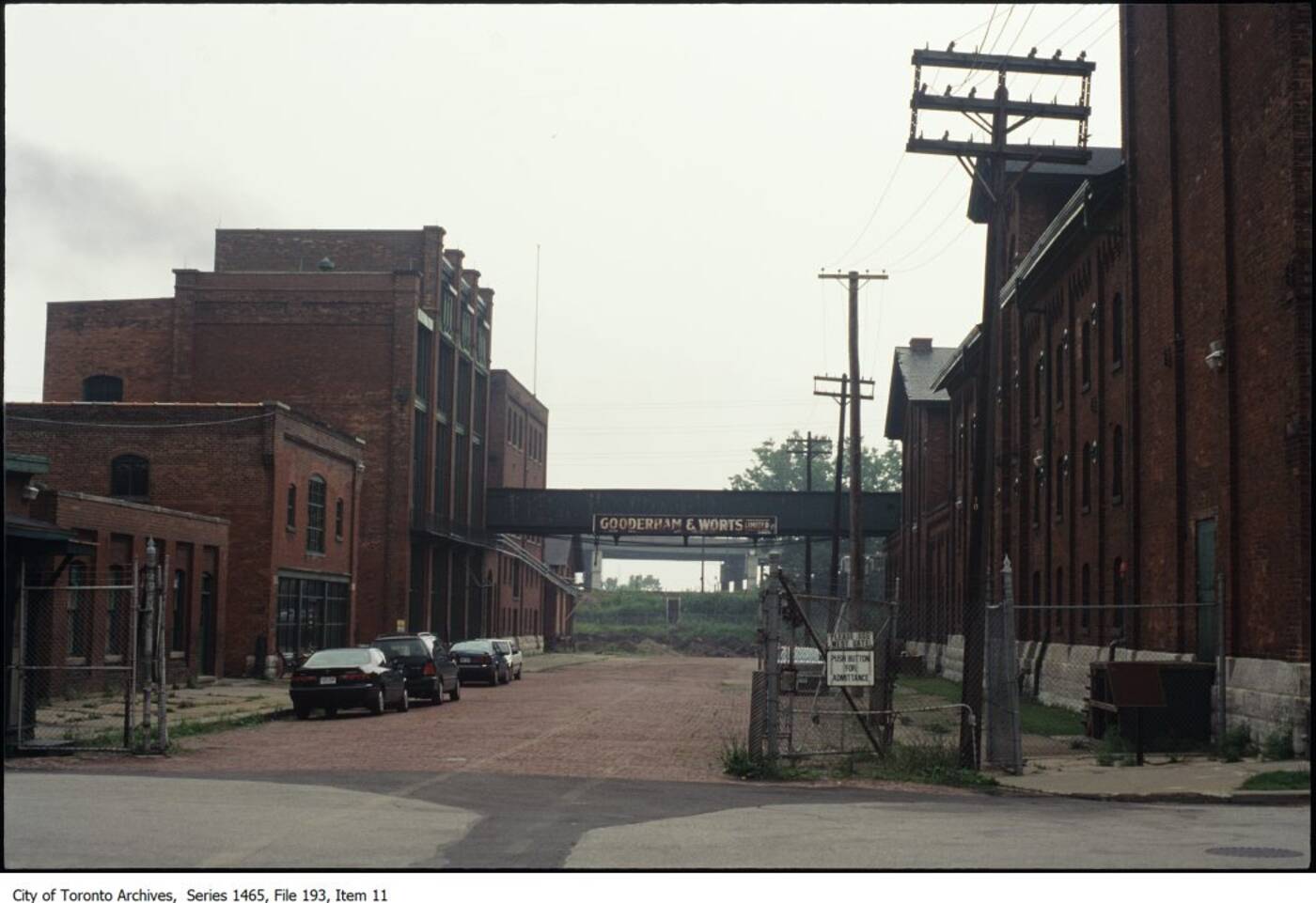 Inside the Distillery District. Photo from the Toronto Archives.

Before the Distillery District was born and became the tourist destination it is today, the old Gooderham & Worts site was used regularly as a film set. 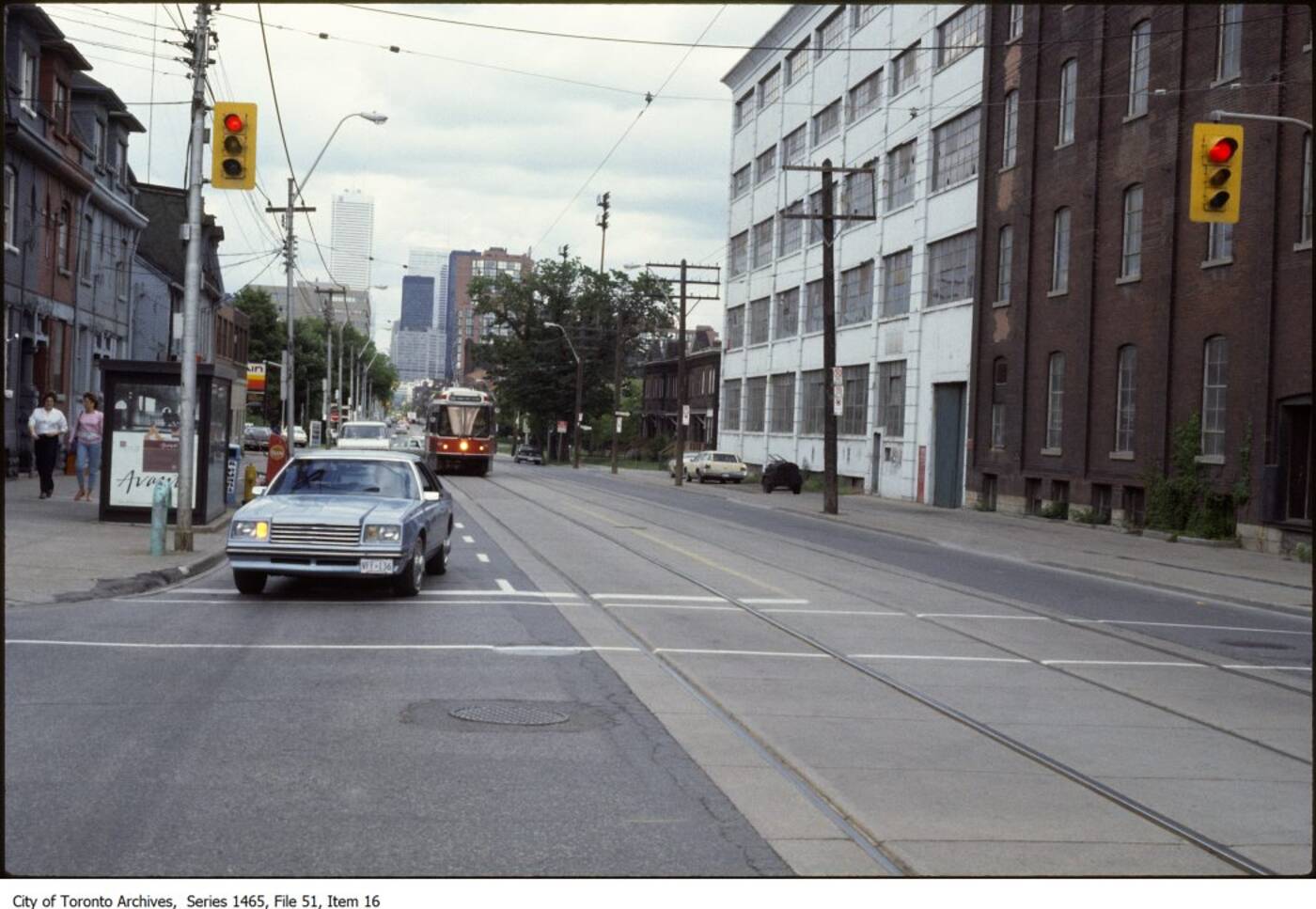 King and Strachan. Photo from the Toronto Archives.

See that old warehouse-style building on the right side of the frame? That's been replaced by a modern glass building and the vista in the distance is starting to fill with condos. 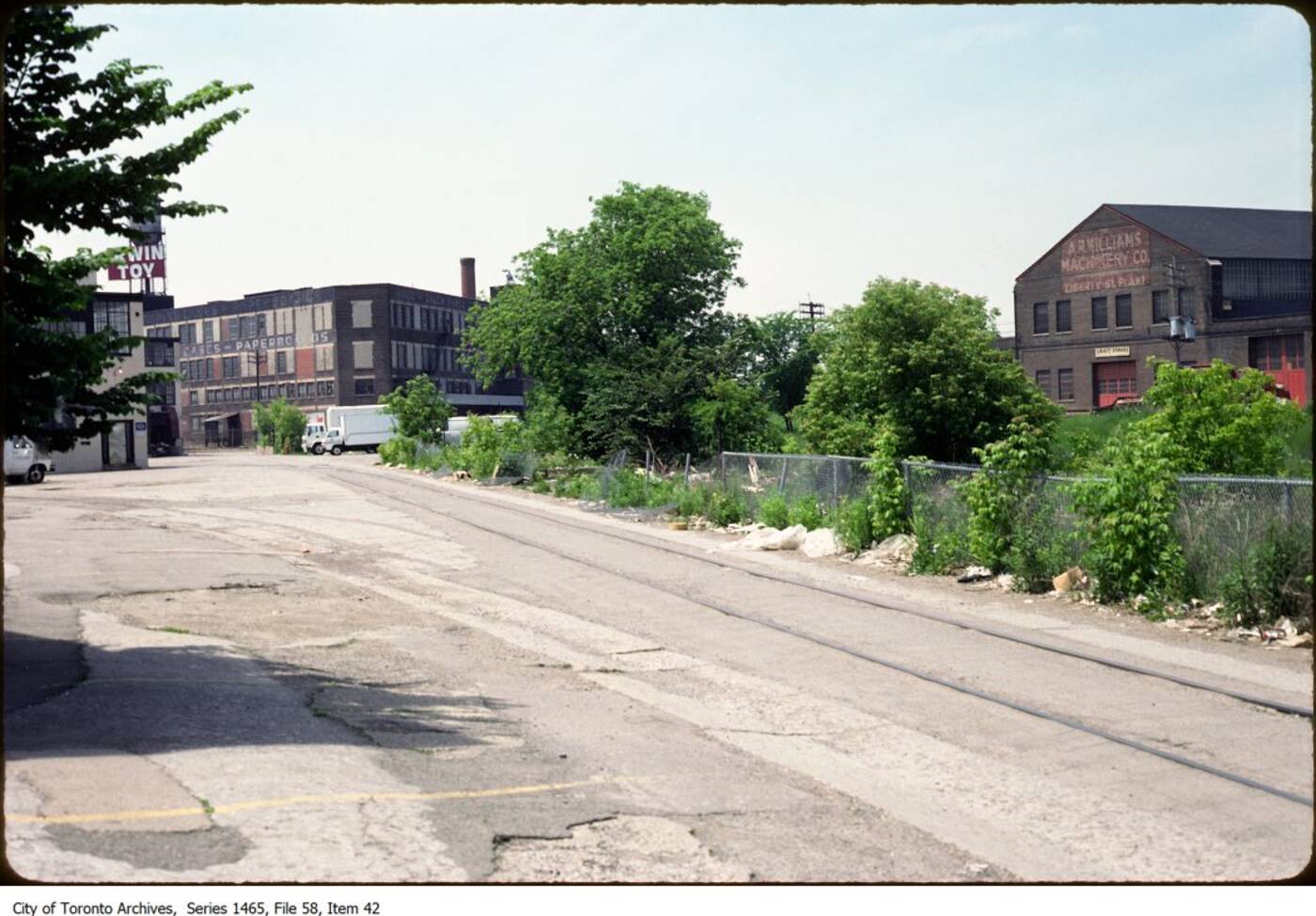 The area that would go on to become the intersection of East Liberty and Lynn Williams. Photo from the Toronto Archives.

Neither of these streets existed in the 1990s, when Liberty Village was still somewhat industrial and only starting to draw in production companies. 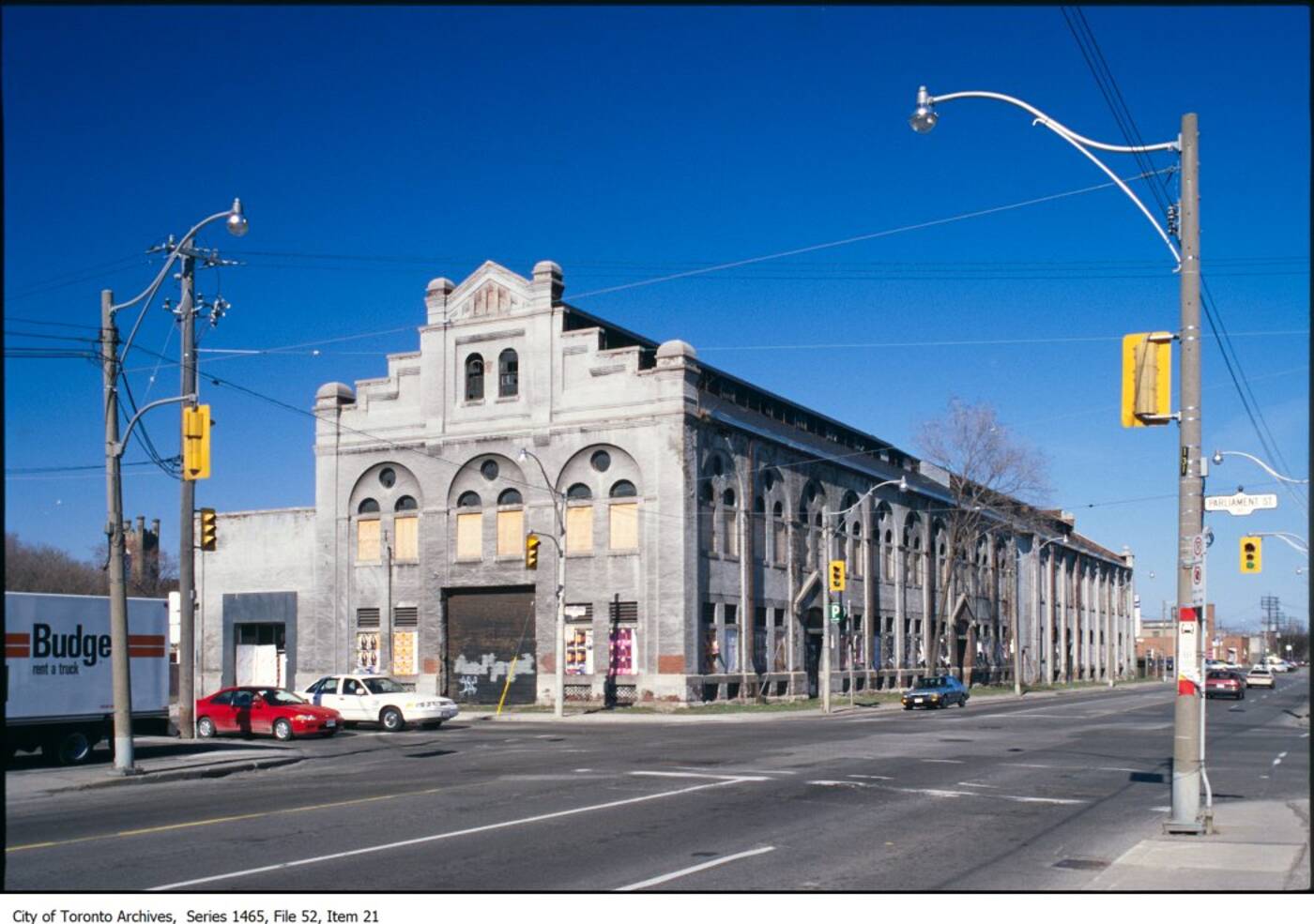 Front and Parliament. Photo from the Toronto Archives.

The old Consumers Gas Building at Front and Parliaments streets looked ready for the wrecking ball until it was restored as a Police Station. 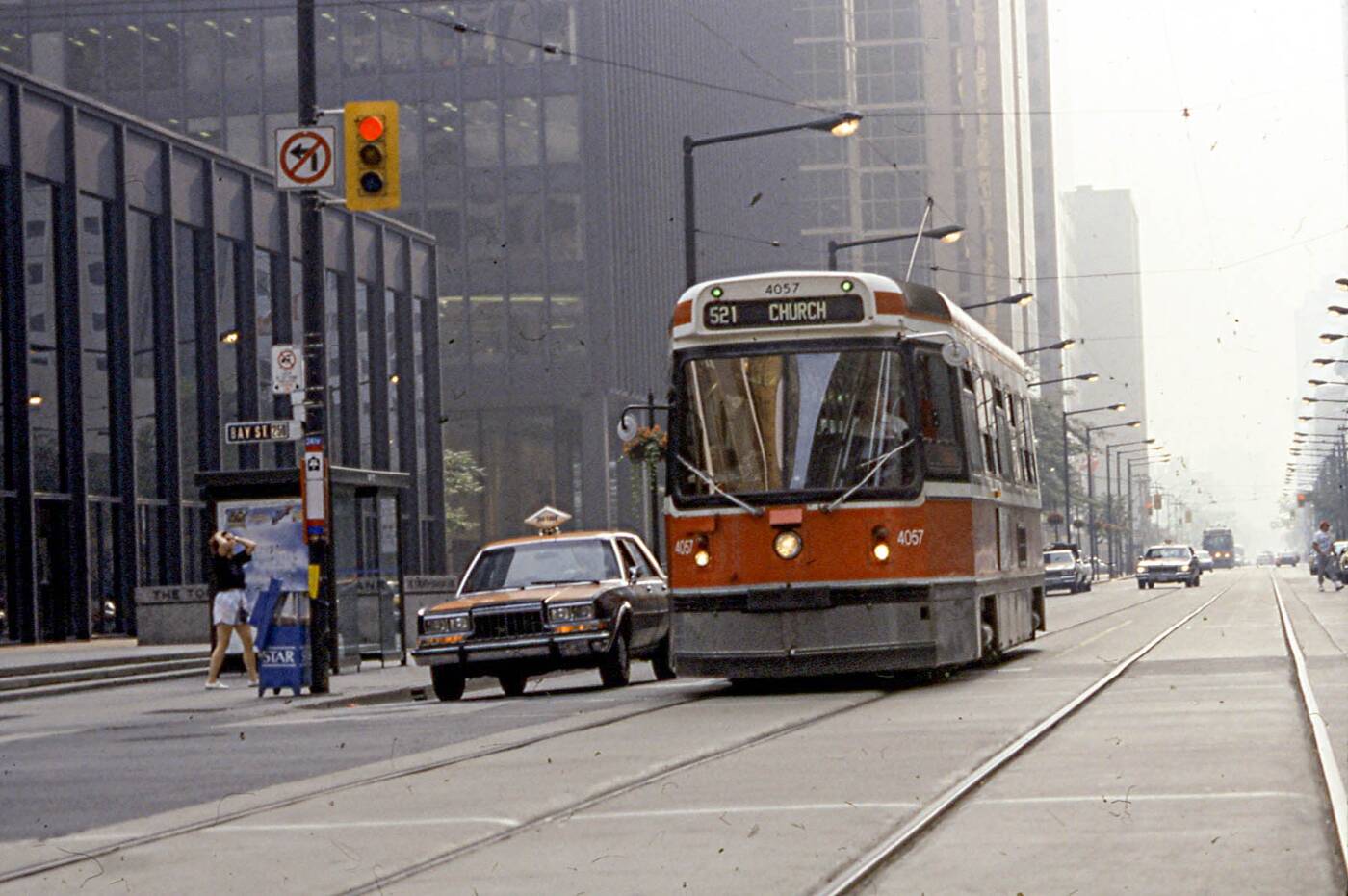 A streetcar and taxi on King Street at Bay. Photo by David Wilson.

This view of the Financial District at King and Bay streets doesn't look that different, but where's all the traffic? 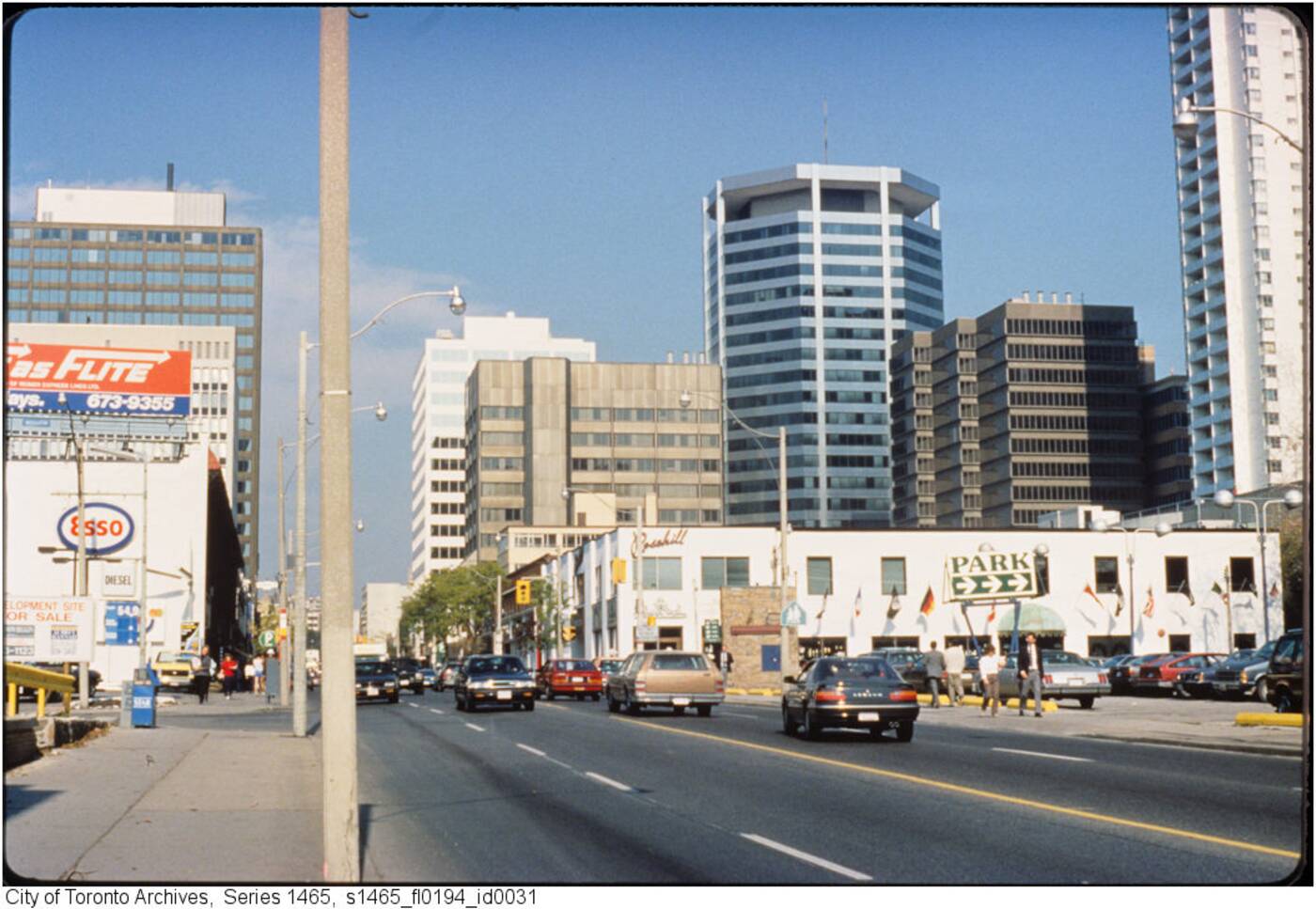 Yonge and Balmoral Ave. Photo from the Toronto Archives.

Pretty much everything in the foreground of this photo at Yonge Street and Balmoral Avenue has changed. 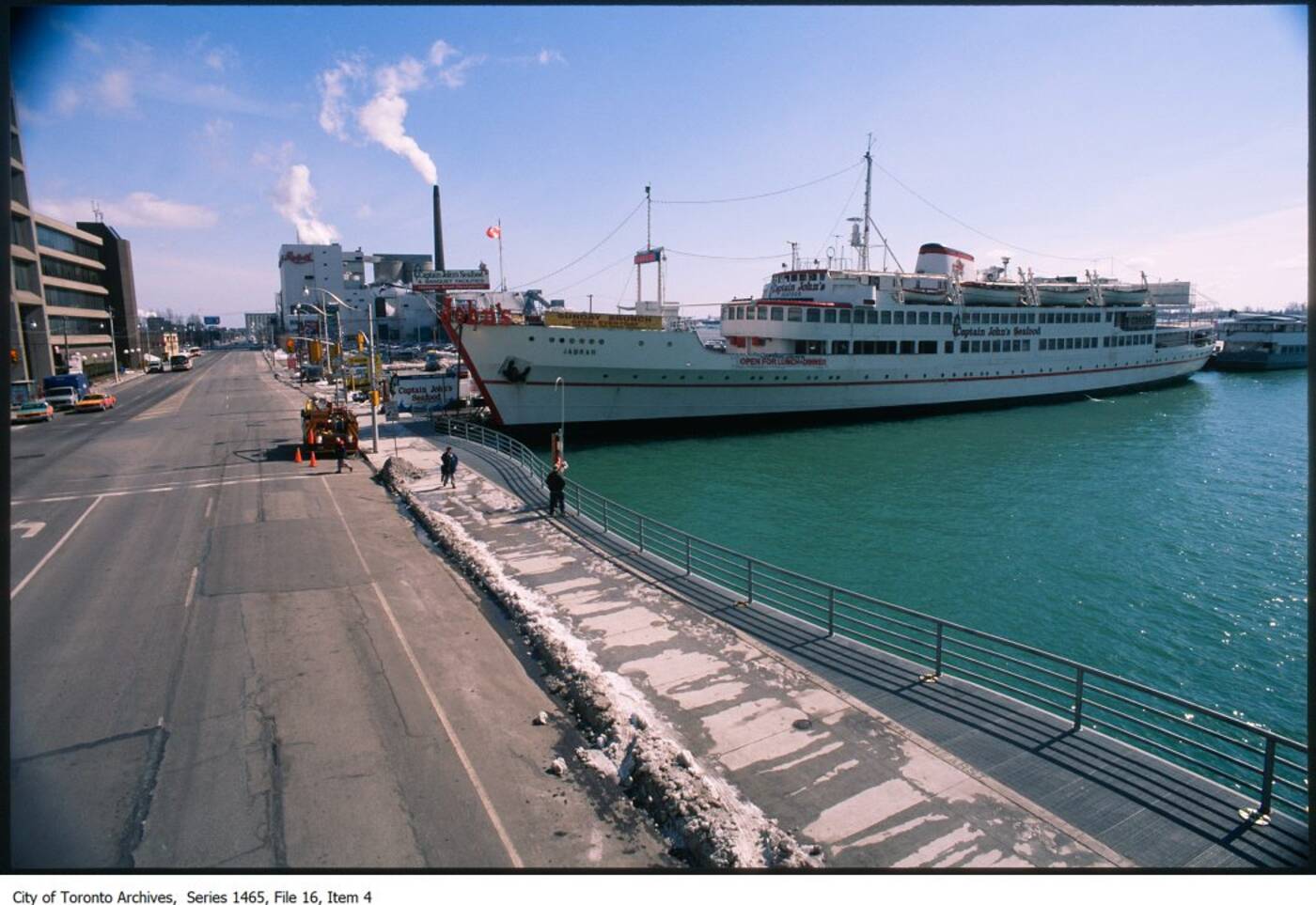 Look at that! Not only does Captain John's look pretty good in this photo at Yonge Street and Queens Quay, but there's not a condo in sight.