This hidden library might be Toronto's most beautiful room

One of Toronto's most important buildings remains something of an unheralded gem in the heart of the city. It lacks the public acclaim of local monuments like Old City Hall, Union Station and the Gooderham Building.

When was the last time you marvelled at Osgoode Hall? 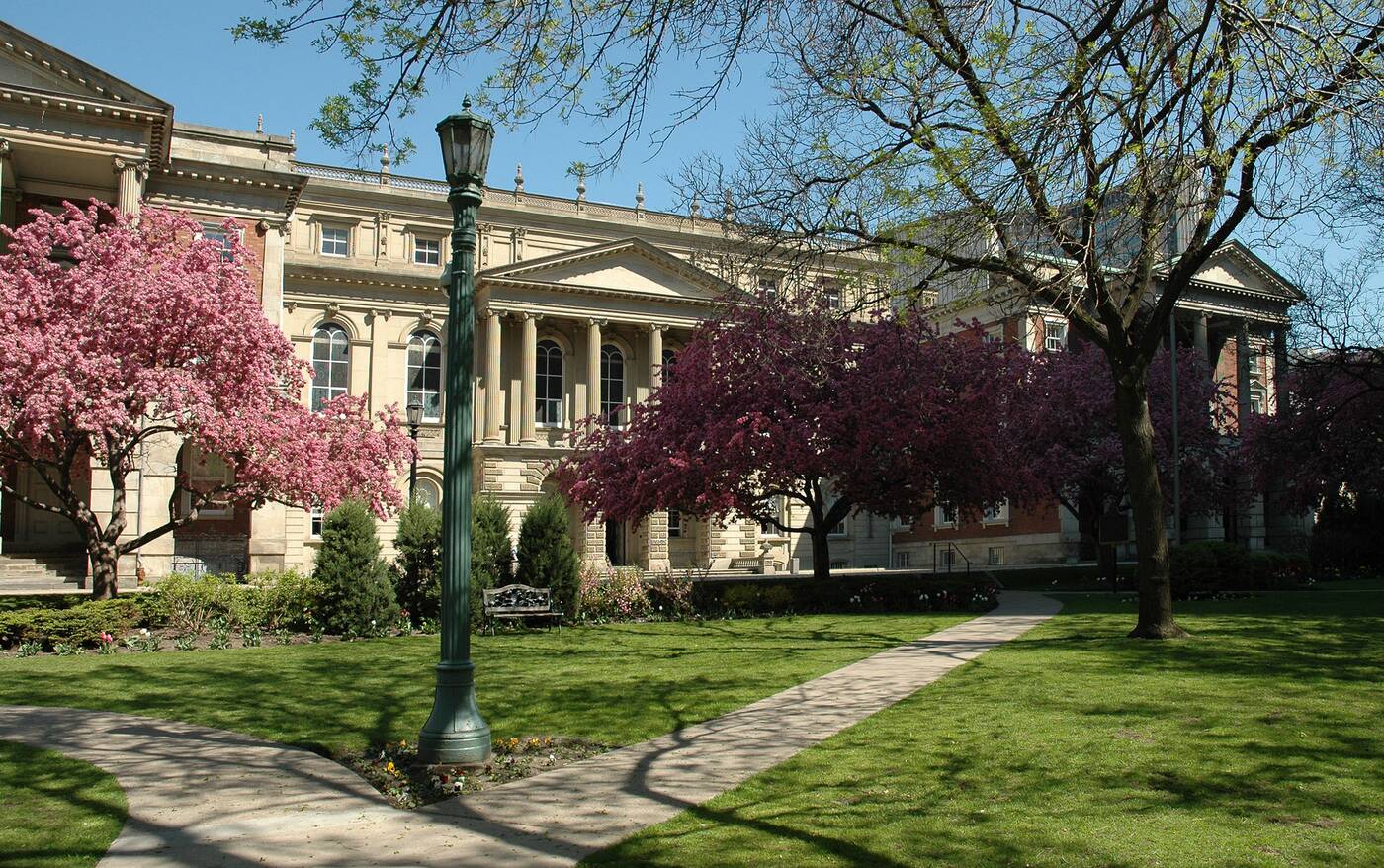 Osgoode Hall and grounds in the spring. Photo via the Upper Canada Law Society.

Don't get me wrong, historians regularly sing the praises of this foundational Toronto institution, but it doesn't animate the city's collective imagination as much as it might if it wasn't surrounded by an imposing cast iron fence and mature trees. 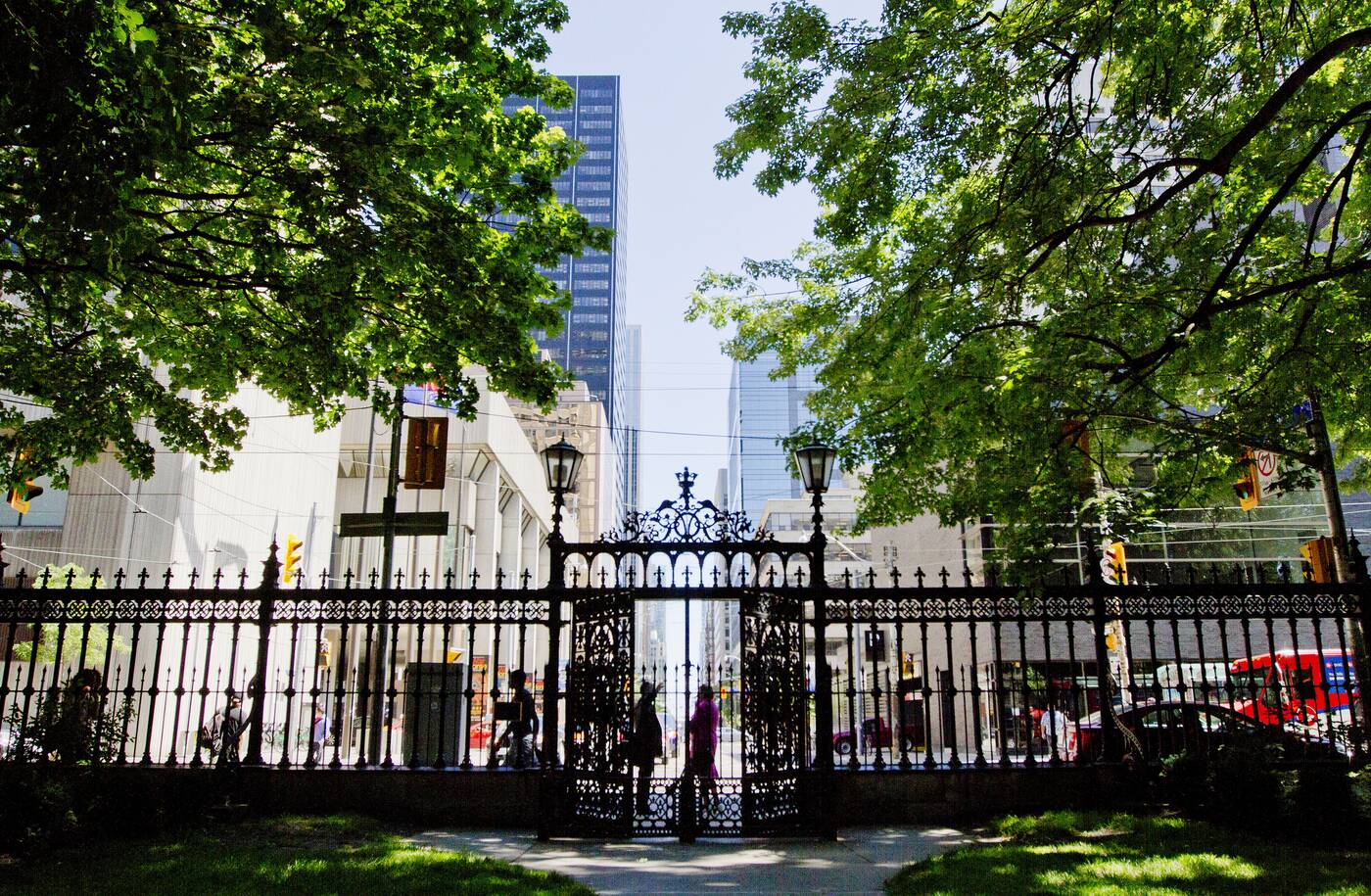 It's said that the fence was designed to keep cattle from wandering onto the front lawn of the stately building (which may or may not be true), but it now tends to discourage people from exploring the lovely grounds that wrap around the home of the Law Society of Ontario.

That's a bit of a shame because there are gorgeous things to see here, inside and out. The stretch of Queen Street, between University Avenue and York Street, that Osgoode Hall overlooks is one of the busiest in the city, but it's a quiet sanctuary on the other side of the fence. 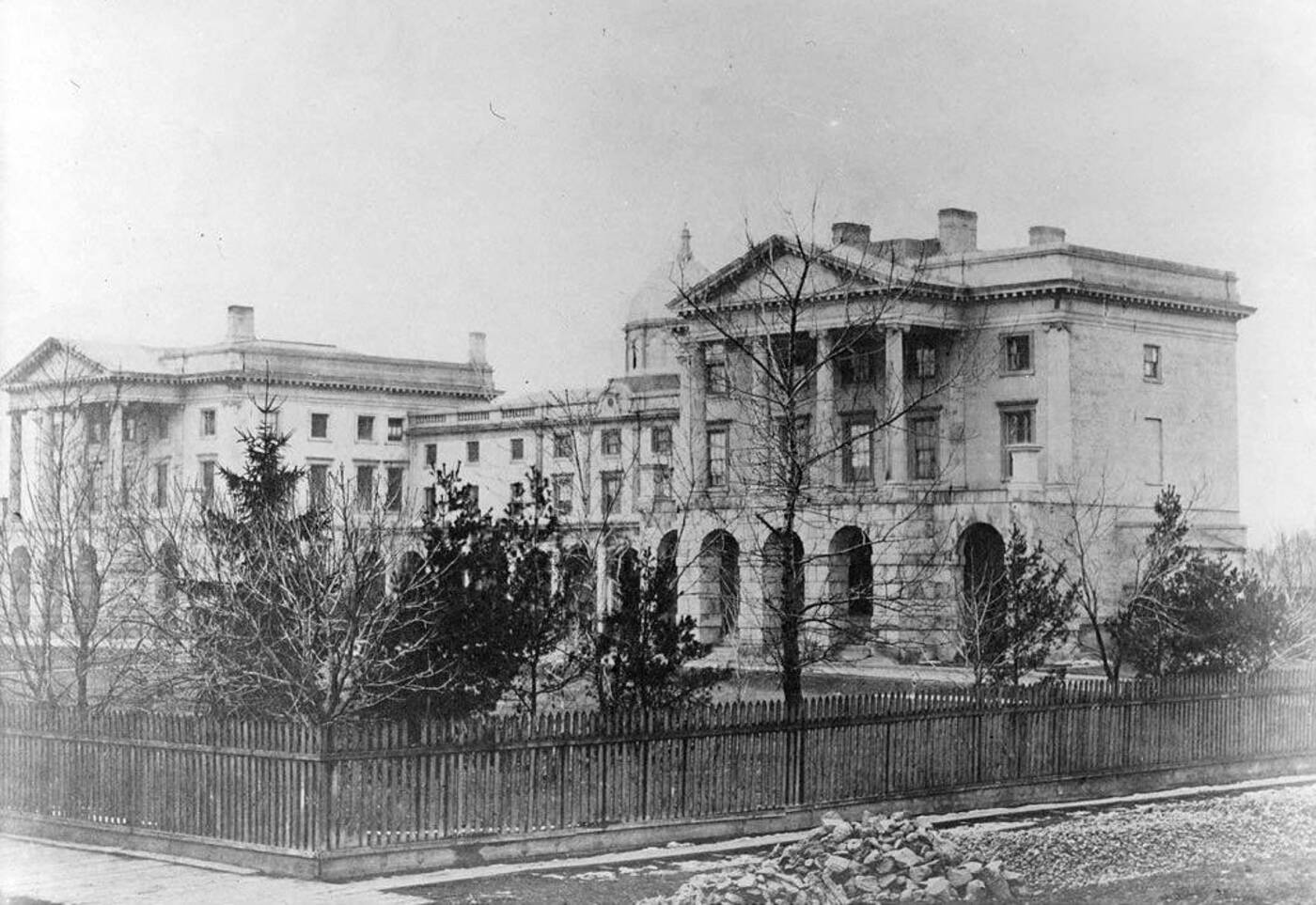 What Osgoode Hall looked like in 1856. Photo via the Toronto Archives.

The oldest portion of the building, on the east side, dates all the way back to 1832. It was joined with a west wing and centre block in 1846 by architect Henry Bowyer Lane before the firm Cumberland and Storm made additional changes between 1857-60.

Many have noted how harmoniously each element blends together in the Palladian style, but it's this second renovation that gave rise to what might be the most beautiful room in Toronto: the Great Library. 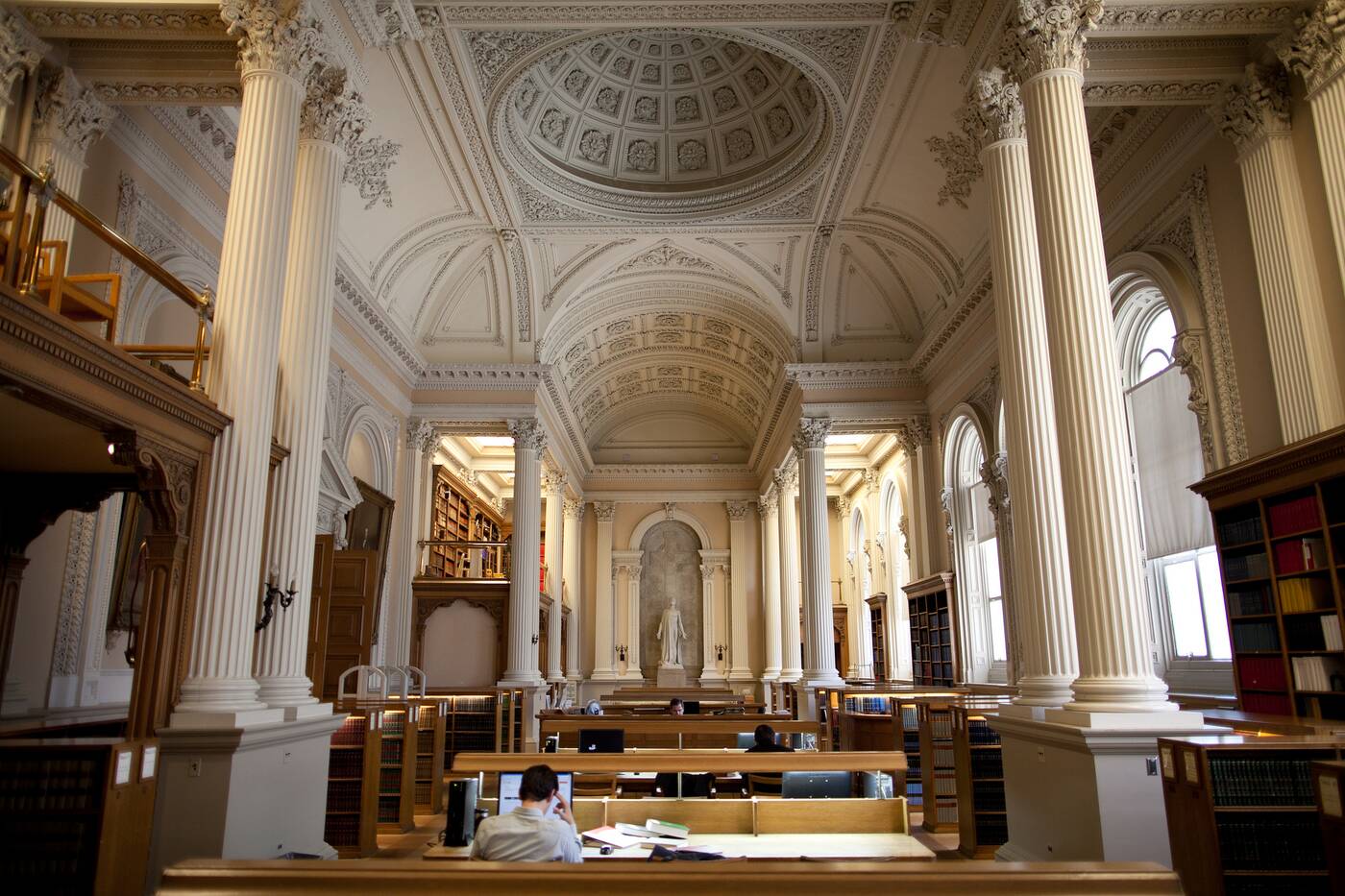 The Great Library as it looks today. Photo via the Law Society of Upper Canada.

Run by the Law Society, the library is an active reference and study area that houses around 120,000 legal volumes, which makes it the largest of its kind in the country.

It's a private space paid for by the lawyers who are members, though the public can access it during normal operating hours to marvel at the architectural details (alas, photography isn't permitted). 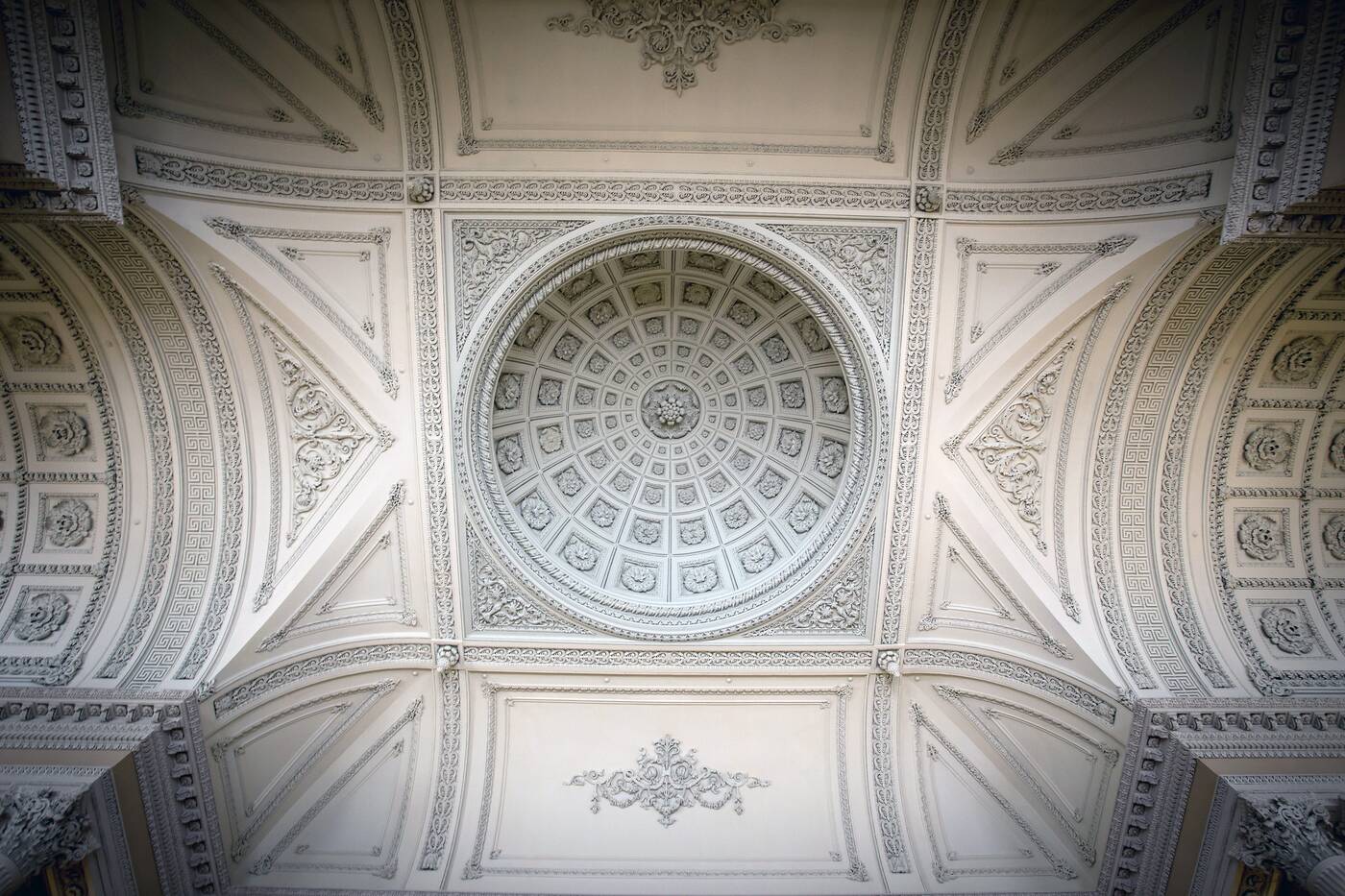 The Great Library is made up of three sections that are each 40 feet wide by 40 feet tall, flanked by ornamental columns and crowned by an ornate ceiling that shows off a level of detail that's hard to fathom. You can get lost just by looking up at it. 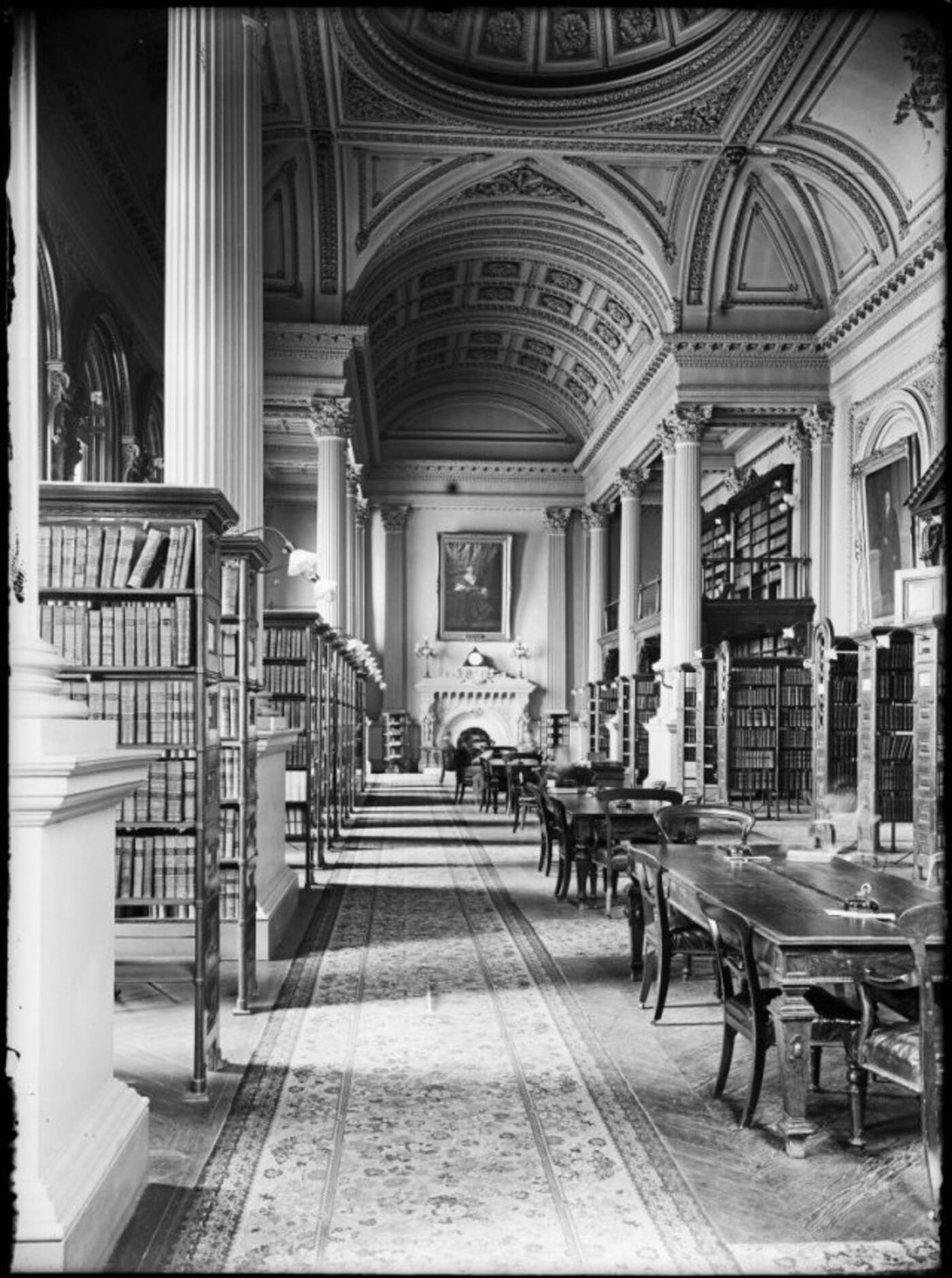 Looking towards the fireplace and mantle of the Great Library in 19o8. Photo via the Toronto Archives.

It's also marked by an enormous fireplace and mantle that serve as a focal point in the grand room. At the opposite end is a World War I memorial by sculptor Frances Loring, which further adds to the gravity of the space. 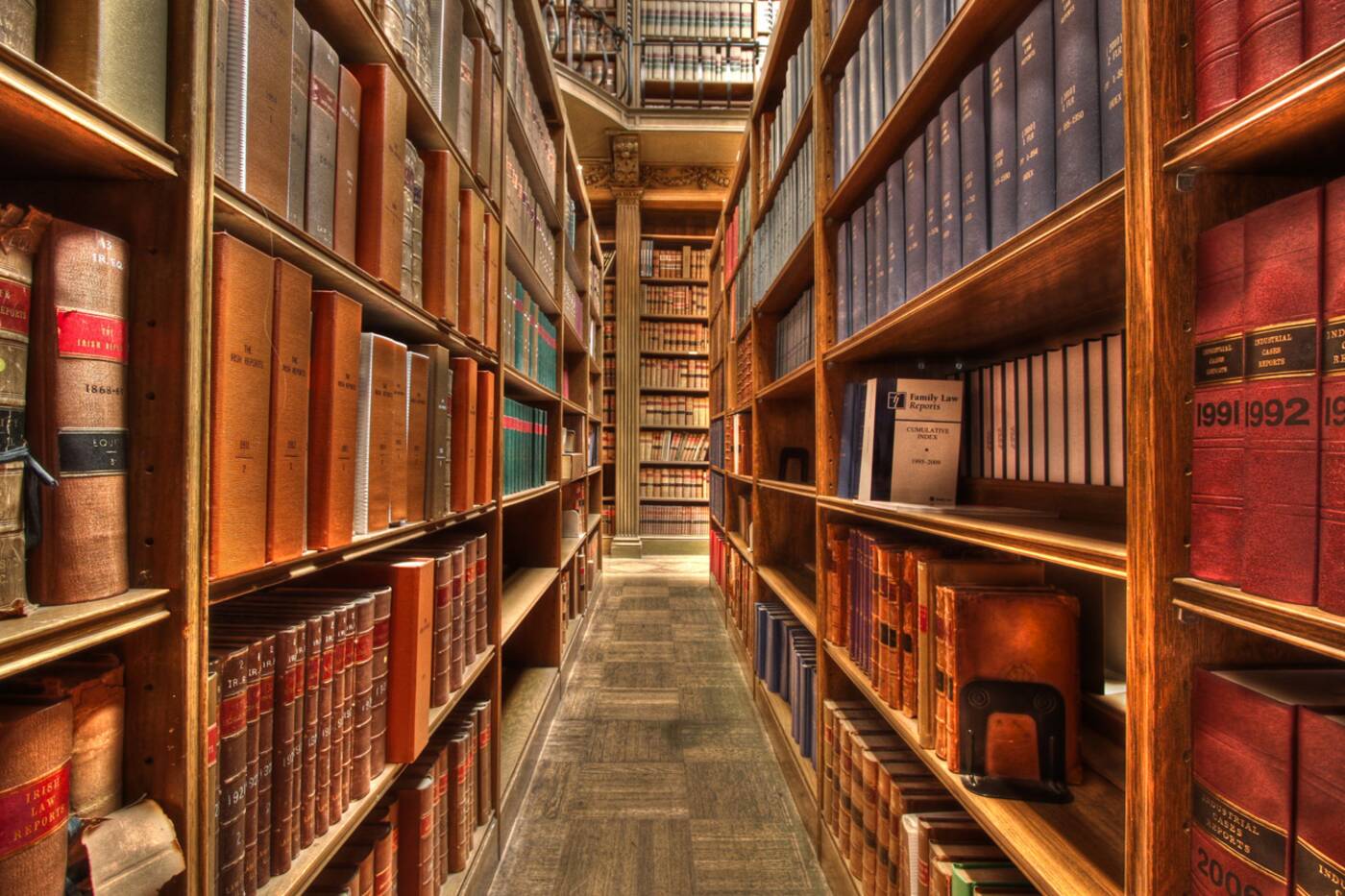 In the stacks of the Great Library. Photo by Jackman Chiu.

Adjacent to the Great Library is the American Room, which architects Burke and Horwood added in 1895 to provide more space for the growing collection acquired by the Law Society of Upper Canada.

The idea here was to maximize shelf space, so there are floor-to-ceiling bookshelves and an elevated platform for accessing the second floor. Decked out in warm-hued wood and uniform volumes, it immediately conjures up the idea of a perfect library. 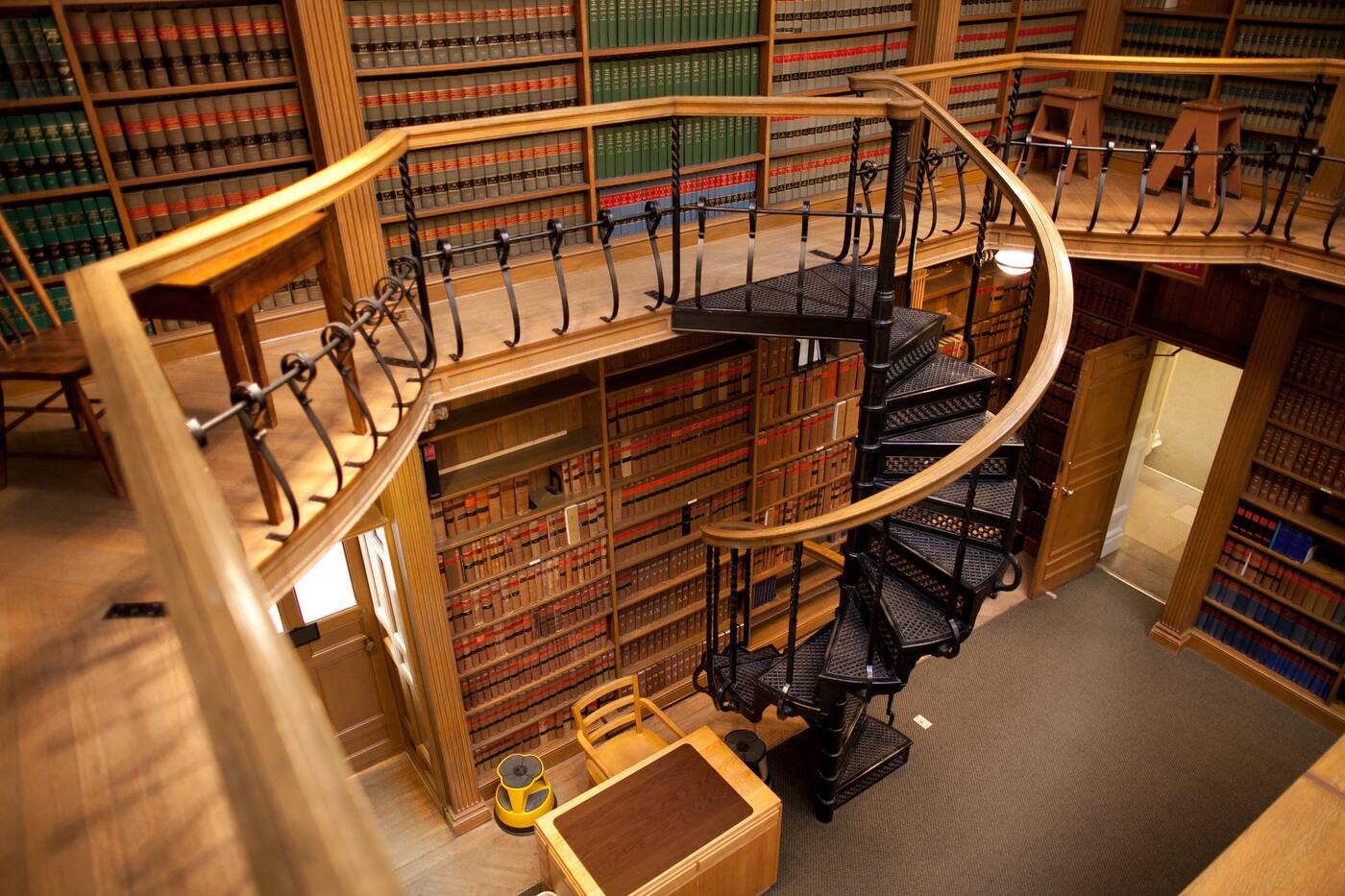 Looking down from the second floor of the American Room. Photo via the Law Society of Upper Canada.

And to think, we often complain that Toronto lacks beautiful places. The Great Library has been around for well over a century, but it's hidden away in this grand old building.

It's the sort of place that's perfect for a quiet lunchtime stop when you can stroll around the space, take in its majesty, and then return to your day thinking the world is a bit prettier than it was before you entered.

Check the library's website for information on public visitation hours.