Toronto’s only true dead mall can be found at Dundas and the East Mall, almost directly across the street from Cloverdale Mall. Where the latter shopping centre has managed to carve out a lasting purpose in the shadow of the far busier Sherway Gardens, the former has fallen into virtual ruin after being closed down completely a few years ago.

Prior to being fenced off, Honeydale Mall spent its last years in a sort of zombie state, not fully alive but not entirely dead either. The majority of the vendors had cleared out, leaving only a weekly flea market as the action in the sprawling retail space.

During these years, Honeydale served as a playground for photographers looking to capture its peculiar end-of-the-world aesthetic rather than as a bonafide shopping destination.

It wasn’t always this way. While the mall was never the type of wildly popular destination as Yorkdale, back in the mid 1990s, the presence of Wal-Mart, a major grocery store, and a host of independent retailers meant that it served a valuable community presence, even as the older Cloverdale was always more popular. 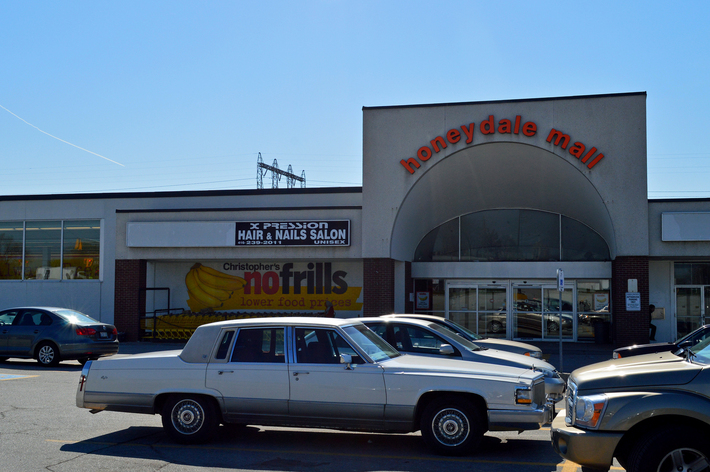 When Wal-Mart moved out in 2004, the major decline began. The No Frills hung on for about a decade, but eventually things got so dismal that it packed it in as well. The entire property was finally fenced off at some point in 2014, leaving only the hulking shell of the former mall to be viewed from a distance. It’s remained that way to this day.

As the mall declined following Wal-Mart’s departure, however, plenty has taken place behind the scenes as its owner the Azuria Group has tried to convert the property into a huge mixed use development in concert with Metro, who owns adjacent properties at 5559 Dundas St. West and 25 Vickers Rd. In fact, Azuria’s plans to redevelop Honeydale Mall date all the way back to 2005 (pdf).

What’s perhaps most amazing about the saga of Honeydale’s failed redevelopment is just how close the property has come to being transformed. While the initial rezoning application filed for the city was put off until a major study of the area could be completed, there was a time in 2011 when it seemed like redevelopment was inevitable.

Following the extensive Dundas/427 Planning Framework (pdf), it seemed like Azuria, Metro, and the City of Toronto were on the same page to proceed with the rebuilding process. Shortly after, things fell apart when the property at 10 Shorncliffe Rd. was added to the application, which required a new agreement.

In early 2012, a hearing at the Ontario Municipal Board (OMB) once again revealed that the developers and the City were close to agreement about the future of the site (pdf), which would involve some 4,500 condo units as well as retail and significant office space. The rapidly deteriorating mall seemed destined for new life.

The interested parties just needed to work out a few Zoning Bylaw Amendments and the final form of the Section 37 agreements, which would outline the community benefits provided by the developers for not complying precisely with the zoning of the site that had been worked out during the Dundas/427 Planning Framework.

Fast forward to 2014 and the parties had yet to agree on the wording of the Section 37 agreements (pdf). The sticking point has to do with Metro and Azuria’s desire to amend the agreement to read “acting reasonably” in some clauses of the agreement that left discretionary decisions with the City. 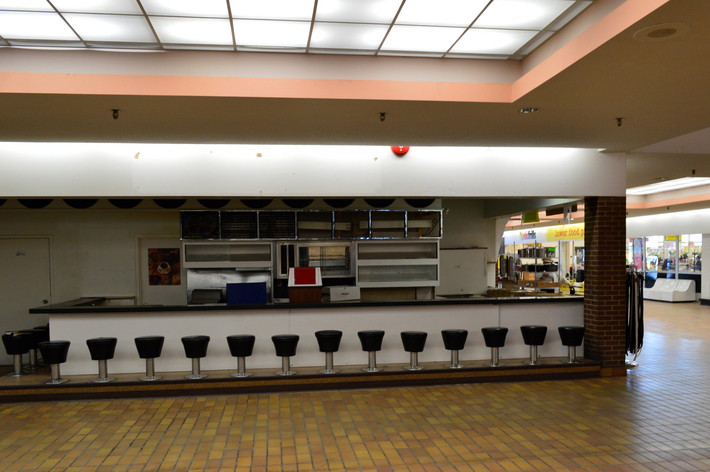 Representatives for the City argued in turn that the OMB didn’t have the power to reword Section 37 agreements. While the Board deferred any decision on the extent of its jurisdiction, it did find that the developers’ desire to add such amendment was unnecessary, as the City is entrusted to act in good faith in carrying out the Section 37 agreement.

As such, the OMB withheld its decision on the proposed development until an agreement could be reached between all the parties, essentially sending the appeals process back to its state in 2012. And that, somehow, is where it remains today. According to the office of local councillor Justin DiCano, there’s no recent news to share about the project.

Honeydale Mall is still stuck in some fenced off limbo awaiting a new future.

Section 37 agreements are tricky things. In some cases, they allow developers and the City to cross major hurdles in ways that ultimately benefit the community, but not everyone believes that they always work in their current form.

The failure to move forward on the Honeydale site would seem to support this opinion. 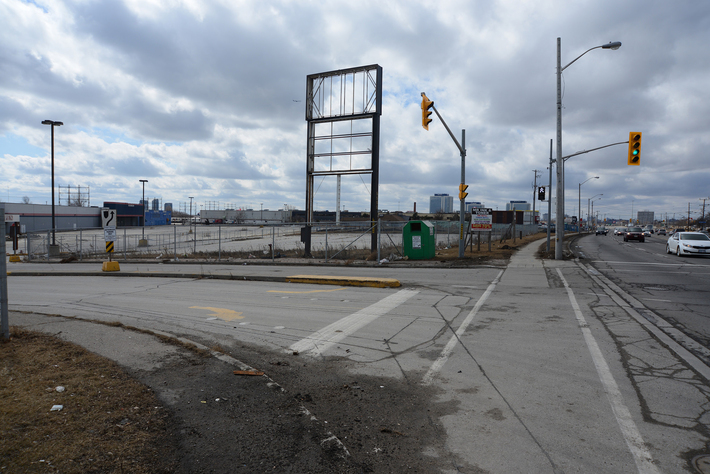 Honeydale Mall as it looked in March, 2015. Photo by Trecentimillelire.