Don't look now, but Toronto's subway system is creeping toward full PRESTO capability. There are now 50 TTC stations outfitted with PRESTO, and a host of fare gates expected to be installed later this year. While there's a ways to go before the entire system is converted to PRESTO, it's becoming significantly easier for users to ditch tokens in favour of the card.

To wit, there are also over 100 bus routes outfitted with PRESTO card readers. There have been some issues with reliability of the machines, but the rollout itself has now picked up steam. With the exception of the 502 Downtowner and 503 Kingston Rd., all streetcars are PRESTO enabled. 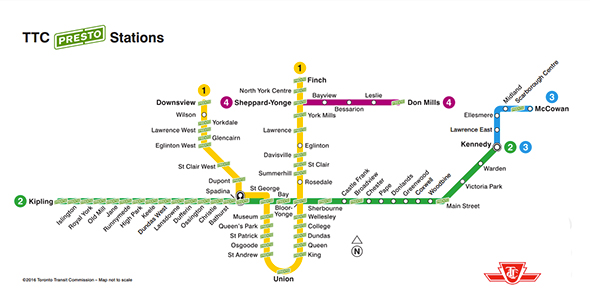 As far a self-serve reload machines go, 35 stations have these right now. The TTC plans to add more as additional stations are outfitted with the fancy new fare gates. For now only a handful of station entrances have been converted to Metropass and PRESTO use only, but the plan is to phase out tickets, tokens and fare collectors sometime in 2017.

TTC fare rates for the Metropass will be available on PRESTO cards next year.

Photo via the TTC.