Santa Claus Parade road closures will pave the way for Saint Nick and co. to travel through the streets of Toronto this Sunday, November 20. The parade will prove a major disruption to drivers and TTC riders, so it's best to plan early whether you plan to attend the festivities or not.

The parade will start around 12:30 p.m. at Christie Pits Park and travel east along Bloor until University, but road closures begin much earlier to allow for set-up and the Holly Jolly Fun Run, which will be in full swing along the parade route starting at 11:45 a.m.

Bloor Street from Ossington to Christie will be closed starting as early as 8 a.m. Other road closures will take place between 10 a.m. and 11:30 a.m. but you probably want to avoid the first section of the route (between Christie Pits and Queen's Park) outright as of 9:30 a.m.

Once the run wraps up, the armada of festive floats will depart from Christie and Bloor, heading east on Bloor to Queen's Park, then south to Wellington, and finally east to Jarvis before a final turn south on Front, where the parade concludes at the St. Lawrence Market.

It's imperative to show up early to snag good sightlines for the parade. A reasonable estimate on timing to get an excellent spot would be 11 a.m., though you won't be out of luck if that's not possible (you just might not get front row). 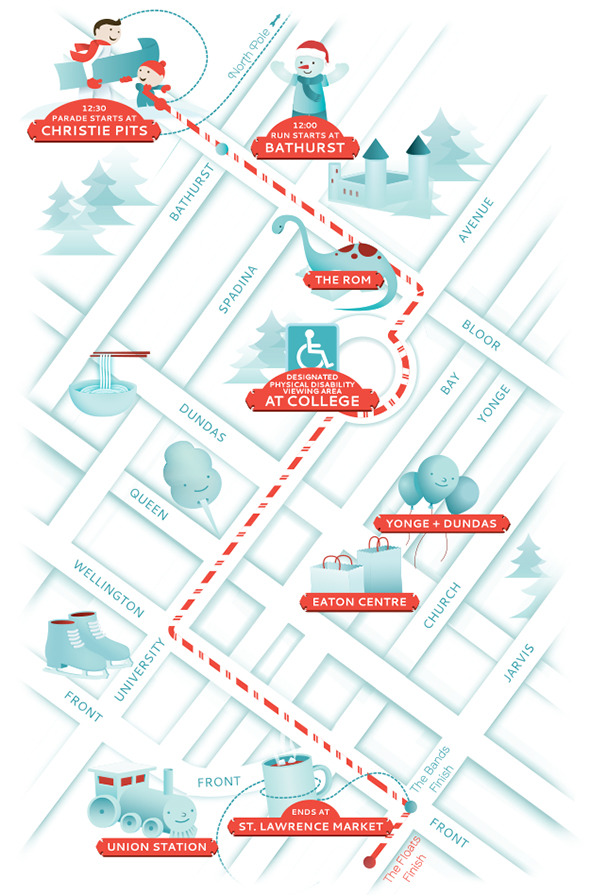 There will also be several TTC bus routes affected along the parade route including the 5 Avenue Road, 6 Bay, 75 Sherbourne, 94 Wellesley, 121 Fort York-Esplanade, 126 Christie and the 300 Bloor-Danforth.

Unrelated to the parade, the TTC has also scheduled maintenance on Line 3 (Scarborough RT), which will be closed Saturday, but re-open on Sunday for all those headed to the parade.

Photo by Tony Mo in the blogTO Flickr pool.