As Toronto rapidly intensifies with more and more condo towers, every once in a while a project will stick out for its design. Sometimes this is on account of how promising it looks, at others it's for the opposite reason, and on occasion it's hard to say one way or another. Such is the case with this new twin tower proposal for 254 King St. East.

The area around King and Parliament is in the midst of a major shift towards density (as are so many others in Toronto), but this double 32 storey tower development with multiple glass connections linking the two structures has the type of flare that many Toronto condo's sorely lack. Architects Page + Steele / IBI Group have got creative with this one.

Perhaps most intriguing is that the glass bridges will also house condo units in them, which will no doubt have significant cachet should the proposal make it through its various design and planning approvals at the city. 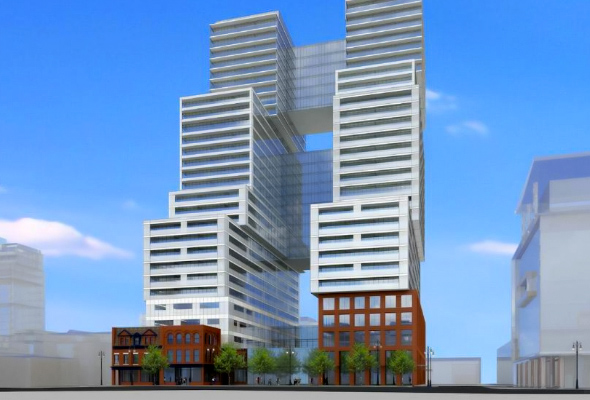 The question as to whether this dual building is aesthetically pleasing is a bit tougher to answer. The manner in which the towers are set back from the street helps to keep pride of place for the historical buildings fronting King St., but it looks a bit awkward to have the glass bridges relegated to the back (or north) side of the towers. They tend to get lost as the building recedes.

In addition to this, the space between the towers doesn't meet Toronto's Tall Buildings Guidelines. You might argue that the linked nature of the buildings makes this development an exception to such a rule (towers must be separated by 25 metres), but there's every reason to think this could be a major sticking point when trying to get approval from the city.

The project is in its initial phase, so there's plenty of time for the review process to unfold, which could see numerous alterations to these plans.

Images via the City of Toronto / Page + Steele / IBI Group