The Scotiabank Toronto Waterfront Marathon returns for another year this Sunday, October 16, bringing with it a chance to see some world class runners, but also major traffic disruptions throughout the city. More than 25,000 are expected to participate in the event, which features everything from the full marathon to a 5K run.

Here's the key info you need to take in the spectacle or avoid it altogether.

While you can watch the run from vantage points all across the route, if you're looking for something a bit more festive, there are designated viewing areas that will draw crowds and feature various forms of entertainment before the runners arrive. The are as follows:

There will also be bleachers set up at the start/finish line near Nathan Phillips Square, but you'll have to arrive super early if you hope to get a spot there.

The Toronto Warterfront Marathon has more road closures than any event in the city, but fortunately for people making their way around downtown, many of them will be lifted by late Sunday afternoon. Key areas of the run will, however, be closed from Saturday to Sunday evening. The chart below offers an overview of all the closures (click it for a bigger version). 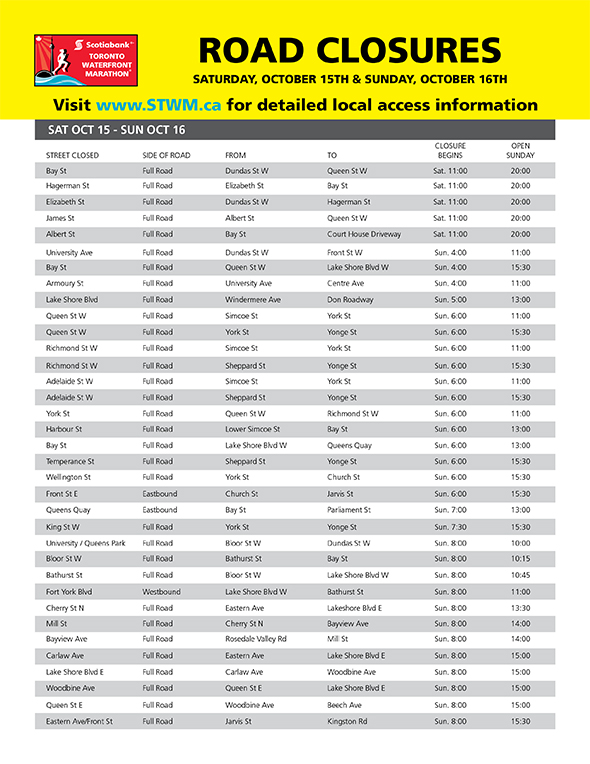 For more detailed information regarding each section of the course that's closed to traffic and what buildings amenities are inaccessible during these periods, consult the official website, which has a detailed breakdown. There's also an interactive map that some might find useful for tracking participants and charting road closures.